How to swim in a current

During your tri career there’s a very good chance you’ll encounter currents in the open-water swim, which can impact your performance. Andrew Potter has this advice

In sea or river courses there’s a very good chance you’ll encounter currents. There are no specific differences to technique when you’re racing in water with a current but it can impact your performance. Depending on its direction, it can make you swim further (or shorter), and may make holding a straight line and navigating turns more difficult.

Mentally, it can also affect you as, if you’re on an out-and-back course, you may have the current with you one way and against on the way back. As such, the swim can, in effect, be much longer if the second half is against the current, so beware and pace yourself!

Your navigation lines need to be adjusted when the current runs across the course. In these circumstances, simply sighting and aiming for the buoy will result in you swimming in an arc and taking a longer course to reach the turn (see Sea Swim). What you need to do is to aim above (or below) the marker to compensate for the drift the cross current will cause.

When approaching a turn in a cross current that takes swimmers ‘below’ the turn, it’s common to see swimmers struggling around the turn – so make allowances early.

In the sea, you can check for any current on the course by swimming to the first buoy and floating nearby to see you drift. You can then adjust your line to counter the current as you approach the first turning point.

In rivers, the current may vary considerably, and choosing to swim a longer route to avoid it can often be extremely advantageous. Generally, the shallower the water, the weaker the current, with the stronger areas being in the deeper parts. On bends, the river will be deeper on the outside. So if you’re swimming upstream, keep to the inside of the bend; when you’re coming back down, stay on the outside.

You only really encounter waves in large open-water lakes or the sea. There are various kinds – sea swell, waves or wind chop. Waves travel in one direction and take you up and down; chop is a series of little waves with no apparent direction to them and a swell is a large wave. When waves reach shallower water they become steeper and, of course, when they hit a beach they can turn into breakers.

Swimming in waves may mean that you need to use a higher arm recovery. If it’s too low, your hand could enter the water too early or be hit by a wave unexpectedly, causing you to lose balance. Since waves move in the same direction, if they are coming from your right and you can only breathe to the right, you’re likely to swallow a lot of water and won’t be very comfortable. This is one good reason to learn bilateral breathing (breathe either side) so that you can adjust the side to which you breathe.

How to swim in choppy water

Sighting is also much harder in waves and swells. Taking your sight at the top of a wave is important – you won’t see anything from the trough. Again, practice helps.

So, with your new-found comfort in open water, you can begin to replicate race-related challenges such as sighting, navigation and swimming straight to better equip yourself for the challenge of racing.

In addition, you can begin to think about waves, currents and sea swimming – all good for building the experience you need to tackle a wide variety of race venues. 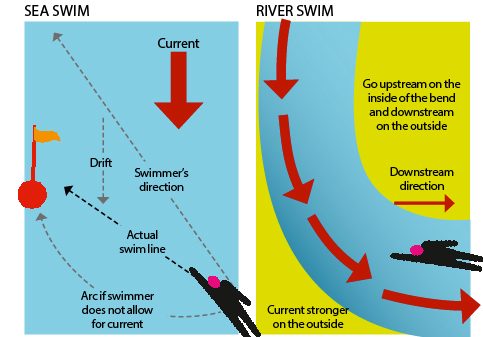