Energy gels: 9 of the best reviewed, tested and rated

Energy gels are a vital part of every triathlete's training and racing kit. James Witts tests 9 of the best to find what you should be taking

Energy gels, those small pockets of power, have become a staple in the triathlete’s larder. Where once their viscosity reached such extreme levels that it was like squeezing out the remnants of toothpaste and proved equally hard to swallow, nowadays the majority of gels have struck a palatable balance between fluid and solid. That makes them ideal for the run where water might not be to hand, though, as you’ll see, many still benefit from a water chaser.

What’s in an energy gel?

Is fructose in energy gels and sports drinks bad for you?

How does endurance sport affect your digestive system?

When should you take energy gels?

Energy gels have become a staple in the triathlete’s larder, their culinary convenience meaning you can bike and run to your heart’s content loaded. But when exactly should you use these speed-and-stamina sachets?

It’s a broadly sweeping brush but they’re not really needed unless you’re exercising for over 90mins. That’s based on your glycogen stores being at capacity through a healthy, energising daily nutrition plan, which highlights that supplements like these aren’t maximised unless you’re fuelling proficiently as the norm, not on occasions. That means good-quality carbs, muscle-repairing and rebuilding protein, good fats, and vitamins and minerals.

How many gels should you consume on longer sessions or racing? The ideal is an individualised prescription or, more likely, through trial and error in training. Start with around 50g of carbs an hour (about two gels) and slowly consume more if you can stomach it over time. More calories delays fatigue resulting in a PB. Time for the test… 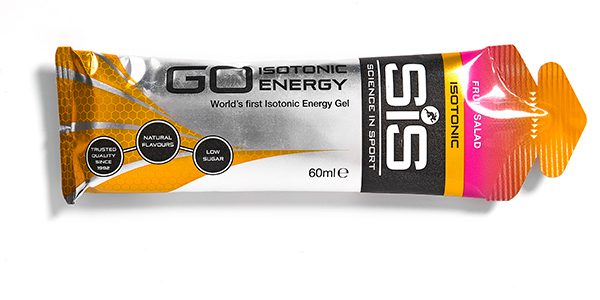 SiS has cranked up its fuelling portfolio with the acquistion of PhD Nutrition, but at its heart remains the gel range, which accounts for 38% of sales. And we appreciate why as the Go Gel is the original isotonic offering that we’ve fawned over for years. Its high water content shifted an industry churning out toothpaste-thick gels to far more palatable alternatives, elevating enjoyment and reducing stomach issues. Like times gone by, the Go Gel continues to deliver 22g of carbs per 60ml serving from maltodextrin. That might seem archaic but many triathletes cope better with single sugar sources than multi-transporters that feature added fructose. It’s all good. Or it would be, but the fruit salad taste is a touch synthetic. Fruit salad is arguably an unnatural composition anyway, so we’d recommend their berry or lemon and mint flavours instead.

Verdict: A timeless composition but there are more palatable SIS flavours out there, 83% 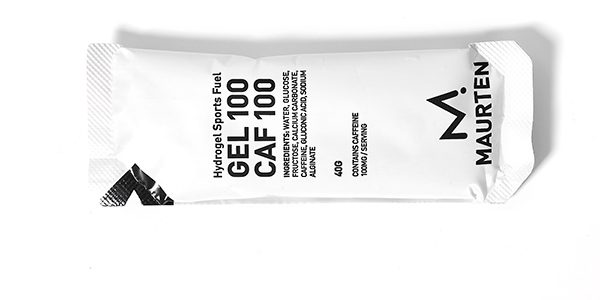 Maurten’s USP is down to hydrogel, made from alginate and pectin. The theory is that hydrogel shields the energy composition from the acidic environment of your stomach, which results in smoother transport of carbs to the intestine where the carbs are absorbed and assimilated into the bloodstream and off to working muscles. Not only does this reduce gastro distress, say Maurten, but it ups the amount of carbs you can ingest each hour. Hence, an early product they launched comprised a huge 80g of carbs. This is a much smaller sugar hit, coming in at 25g per 40g sachet. We enjoyed its neutral taste but, more uniquely, its jelly-like texture, sitting halfway between an energy block and a traditional energy gel. As for caffeine, 100mg is a strong hit to start stimulating potential ergogenic benefits. But you can’t ignore that heavy price.

Verdict: a potentially ground-breaking  energy gel, but at an eye-opening price 79% 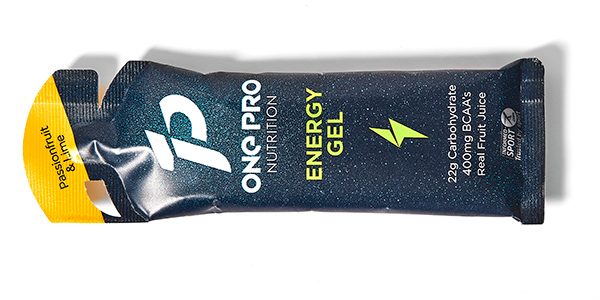 One Pro Nutrition is the baby of former England cricketer Matt Prior. They entered a congested market that, for us, needs a USP beyond the marketing budget. In the case of this gel, it’s the addition of 400mg of branched-chain amino acids. BCAAs are a key activator of the protein known as mTOR, which stimulates muscle protein synthesis. That intimates its recovery potential yet many nutritionists suggest whey protein is more effective than BCAAs at preventing muscle breakdown. That’s not to say it doesn’t have its benefits, it’s just that like so much in the world of sports fuel, the evidence isn’t proven. The main function of the gel, of course, is to deliver energy with each 50g sachet containing 22g carbs from maltodextrin sources. That’s middling calorie-wise.  The passionfruit/lime taste is one of the sweetest here but, all in all, it’s not bad.

Verdict: A sweet taste but worth a punt, and the BCAAs might help performance and recovery 76% 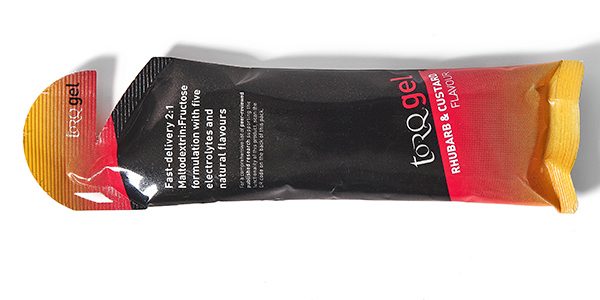 In the past, we’ve praised Torq’s lemon and drizzle gel as one of the tastiest we’ve ever tested. And their rhubarb and custard beautifully sidesteps what could’ve been a sickly-sweet solution. Its texture is perfect – light enough to flow smoothly, but with enough depth so that it contains 28.8g carbs in each 45g sachet. Carbs come from the trusted 2:1 maltodextrin:fructose mix, those dual sugars requiring separate intestinal transporters, meaning, in theory, you could consume three of these each hour for a 342cal hit. Its compact packaging and the fact water is only the second ingredient listed highlights its hypertonic nature, meaning this is more about energy delivery than hydration. That makes its consumable qualities more impressive as this could’ve been claggy. Also features electrolytes sodium, chloride, potassium, magnesium and calcium.

Verdict: Another impressive energy-delivering gel from Torq; and a good taste and texture too, 89% 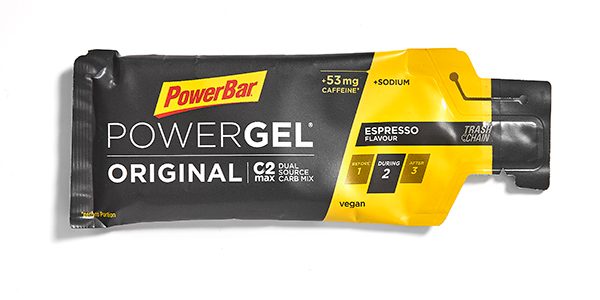 Salty peanut is a refreshing change from the tsunami of sweetness sweeping over this test – and that ‘refreshing’ element isn’t just down to its savoury taste. This is the most summer-friendly gel here, featuring 206mg of sodium. Heavy sweaters should pay particular attention as sodium is vital to channel water from the bloodstream to working muscles; lack sodium and dehydration beckons. Each 41g gel contains 26.7g of carbs from the dual sources of maltodextrin and fructose. The addition of fructose has been shown to elevate carb-ingestion potential up to 90g per hour from 60g of single-source glucose or sucrose; in fact, PowerBar were the first to commercialise Asker Jeukendrup’s findings years ago. Just note that few athletes, especially age-groupers, can tolerate 90g of carbs per hour so experiment in training. powerbar.eu

Verdict: A savoury nutty delight, especially for the heavy sodium sweaters out there 86% 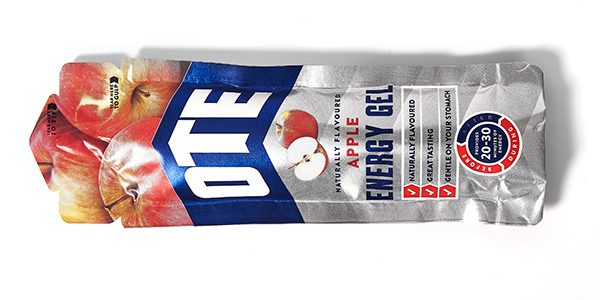 We’ve consumed a mountain’s worth of OTE gels since their launch seven years ago, but this is their tastiest yet. The natural apple flavouring expresses itself with harvest charm and is really rather pleasant. It energises your palette and also energises your session, yet each 56g gel delivers just 20.5g carbs – the lowest on test – from the popular partnership of maltodextrin and fructose. That leaves a remaining 35.5g, which mostly derives from water, making this one of the least viscous on test. In turn, it flows down smoothly.

We’ve criticised sachet size in the past and, while this remains one of the larger here, it’s smaller than previous incarnations. OTE have a reputation for simplifying the confusing world of sports nutrition and this gel is stamped with feeding guidance. Ease of use stretches to two openings – gulp or sip.

Verdict: A relatively low carb content, but a tasty gel that’s soft on the stomach, 81% 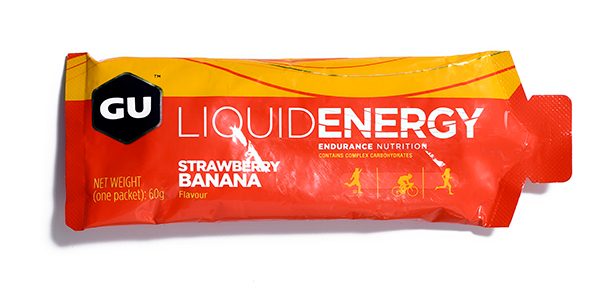 When it comes to gels, size is key. So points deducted for the GU as the joint largest on test here at 60g. Does its contents compensate for this overlarge oversight? Partly, as water is its primary ingredient. Within those waters swim 23g of carbs – nominal for such a large vessel. They come from fructose and maltodextrin, so you could consume four of these an hour, yet the strawberry and banana flavour might result in nausea. Each sachet also contains leucine, interesting as leucine is generally seen as the most important amino acid post-training by elevating protein synthesis. That’s great for training when you’re looking to recover quickly. But it’s confusing as the nutritional breakdown says no calories come in the form of protein, suggesting it has such a small amount of leucine that its impact is negligible. guenergy.co.uk 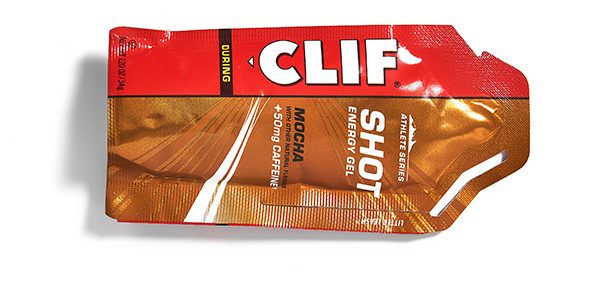 ‘Chocolate + coffee with a kick of caffeine,’ reads the Clif marketing blurb. ‘A deliciously dynamic duo.’ And we have to agree, especially on cold winter mornings where its astringent taste provides a warming feel. That dynamism would, of course, need more than a 50mg caffeine hit, but a couple of these in a 60min period should do the supplementary trick. This is the smallest sachet on test, coming in at a rear-pocket-appreciated 34g, but still drives 24g carbs into your bloodstream and working muscles. The carbs come from maltodextrin and cane-sugar sources, both of which are in greater quantity than water, which highlights that you’ll definitely need a water-chaser. That’s impractical but we’d argue worth it for the rewarding taste and texture. Also, further marks for the minimal ingredients list – unusually it reads fewer than 10.

Verdict: The texture harks of days gone by but the taste more than compensates for it 84% 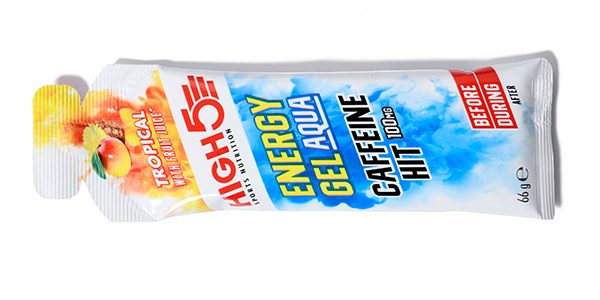 The off-road Sodbury Slog provided the racing backdrop for these gels – and they stimulated a kick with every slurp thanks to 100mg of caffeine. We’ve complained before about High5’s caffeine offering giving an almost-imperceptible 30g of this most proven of supplements (nowhere near enough to unlock increased power output and better decision making). The extra 70mg here is far more credible, yet it leaves a bitter taste. For some, it’ll grate; coffee slaves will love it. There’ll be further divisions with the flavouring as the tropical tastes artificial. Each 66g gel is swimming with 23g carbs from two single sugar sources: glucose and maltodextrin. That leaves 43g of space, mostly filled from water. We suspect this water hit is more due to diluting the bitterness of caffeine than easing digestion. High5 are known for affordability but £1.70 is high.

Energy bars: 8 of the best reviewed, test and rated

Carb rinsing: can it really improve your athletic performance?