Half iron, Ironman 70.3, middle-distance, half-Ironman… whatever you want to call it, 113km racing is on the rise. And it’s an achievable and hugely-rewarding experience, yet comes in as far more manageable and less all-consuming than full iron-distance racing.

Happily, like their bigger siblings, they invariably take place in spectacular settings, from stately homes to the rolling hills of Snowdonia and more gorgeous lakes than you can poke a set of aerobars at.

So, onto our UK top eight, which we’ve rated in terms of elevation gain, water temperature, cost and cut-off times. We’ve also ranked them according to average finishing time and how what proportions of triathletes DNF’ed at the race in 2017.

All the swim legs, apart from the Monster Middle (this is a river swim and we have deducted one point for this), take place in lakes, which we think is the optimum body of water for beginners, and the perfect total bike elevation is seen as 500m over the 90km. 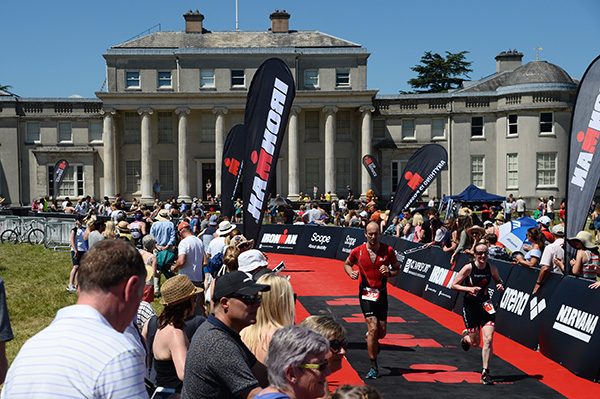 Of Ironman’s UK-based logistically impressive and slickly run events, it’s 70.3 Staffordshire that edges Edinburgh and Weymouth as the pick for beginners due to the calm and warm lake swim (although the latter two also have much to recommend them for 113km novices, especially Weymouth’s flat seafront run leg).

The 70.3 Staffs races consists of a single loop 1.9km swim in Chasewater reservoir before a rolling 90km bike through the countryside outside Lichfield, Burton-upon-Trent and across the Cannock Chase Area of Outstanding Natural Beauty. The half marathon run takes athletes around the Stafford town centre before finishing in Market Square. 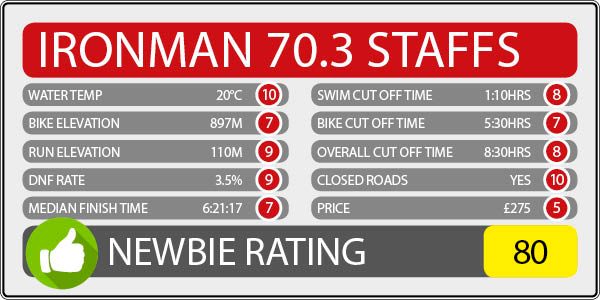 In equal 7th with Staffs is the award-winning Monster Middle. This is the only race here with a river swim, before a fast bike leg in the Cambridgeshire countryside and a run around the historic gem of a city, Ely, and its stunning cathedral. Entry is capped at 300 people to give athletes plenty of space on the course, and the run is held on closed roads.

“I was really impressed with the organisation and the course was top notch,” says top age-grouper and 2016 winner Dionne Allen. “The volunteers, support and fun-filled atmosphere were awesome and really made you race with a smile.” 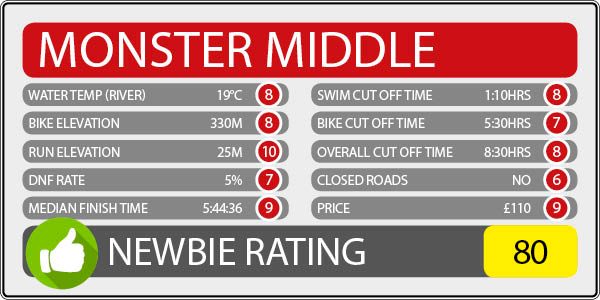 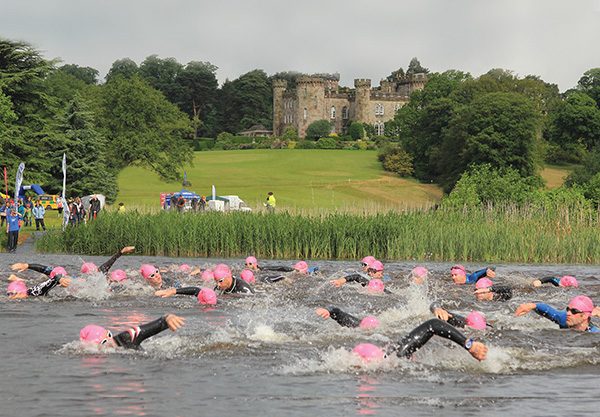 We also have a tie for 5th with races from two well-known race organisers. The Castle Triathlon Series organisers are famous for catering for beginners to tri, and their middle-distance 113km Gauntlet races, while naturally tough, extend this novice-friendly approach.

While Hever and Castle Howard take the lion’s share of acclaim in the Castle Tri Series, here we’ve opted for the Cholmondeley leg of the series due to its flatter bike course and warmer lake than Hever.

The race begins with a two-lap swim in the Deer Park Mere before heading off out of the estate on a three-lap 30km course around the length and breadth of the Peckforton Hills, circumnavigating the National Trust’s Bickerton Hill en route back to the estate. The 10.5km looped run takes in fine views of Cholmondeley Castle before a finish in front of the castle. 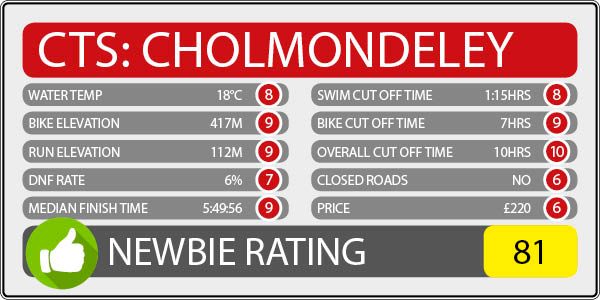 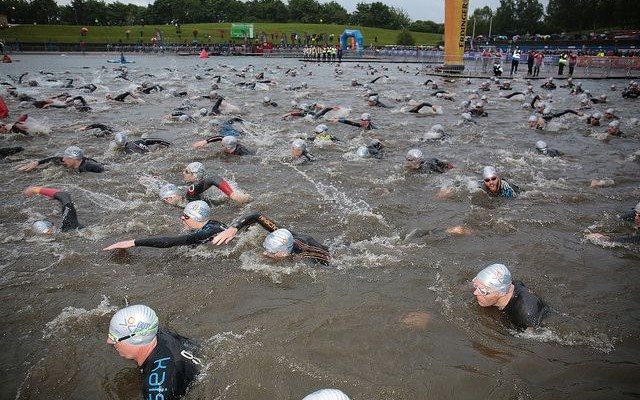 Race organisers OSB topped out iron-distance for beginners list with the original Outlaw in Nottingham, and their middle-distance races ain’t bad for the newcomer to 113km racing as well.

Out of the two Outlaw Halfs, we’ve gone for the later-in-the-season Outlaw Half Holkham (it’s easy to get a race spot as well) held at the Holkham Estate in Norfolk.

Further beginner-friendliness comes in the form of the on-site camping for competitors and their family and friends, as well as OSB’s proven athlete care from registration to race day. 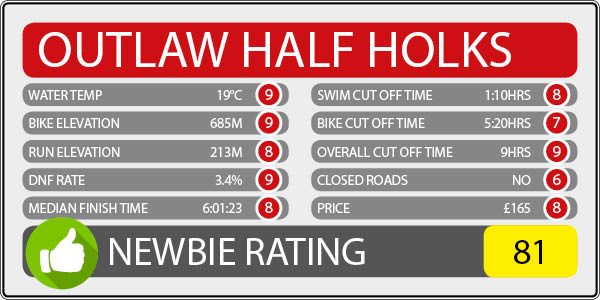 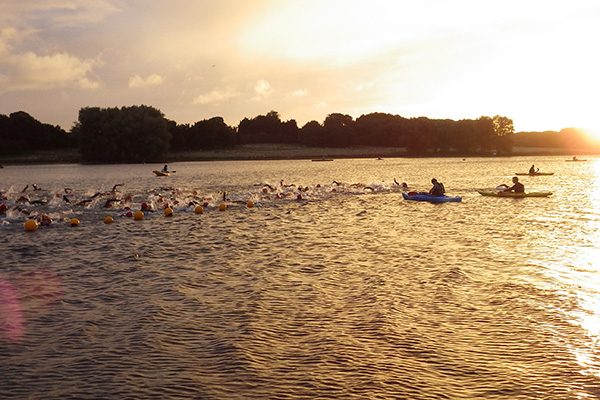 From UK tri legend Mark Shaw, the Vitruvian has long welcomed athletes to the beautiful setting of Rutland Water in the East Midlands for a middle-distance classic. After a swim in the calm Rutland Water, the two-lap bike course is rolling with one big climb, the Rutland Ripple, to contend with. The flat and mixed-terrain run around the lake climaxes with a well-spectated finish line creating a party atmosphere. 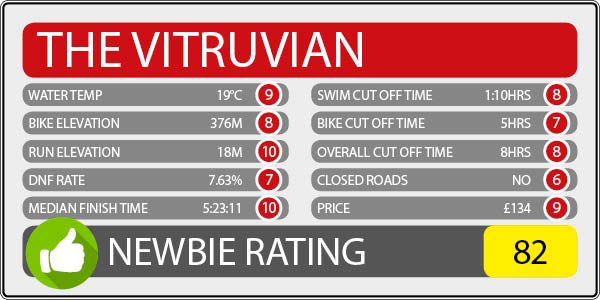 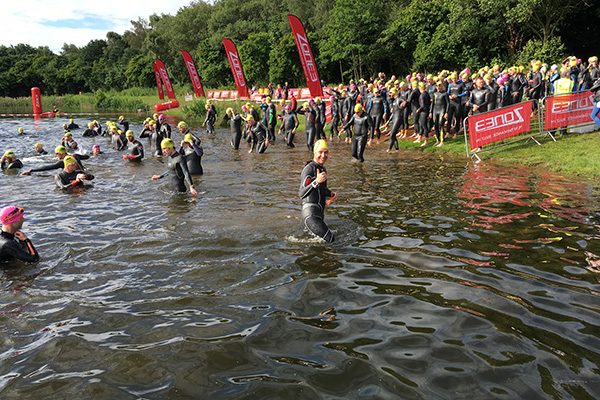 The numbers of the UK Ultimate Triathlon may be in the tens rather than thousands, but that’s all part of the draw of this low-key half iron experience. Like its UK Ultimate full triathlon, which we voted as one of the best iron-distance races for beginners, this features a calm multi-lap swim, flat bike and run courses and a minimal DNF rate.

“There’s no hassle or stress at the UK Ultimate,” says UK age-group legend Anthony Gerundini. “The low-pressure environment should quell any race nerves. With the accompanying iron distance race earlier that day, the race has enough buzz to be exciting, but isn’t so big you just become a number to be herded. You get loads of chances to visit the aid stations. High fiving and mutual encouragement is mandatory! Everyone has a smile on their face.” 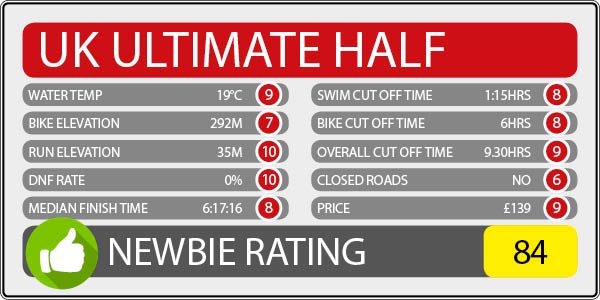 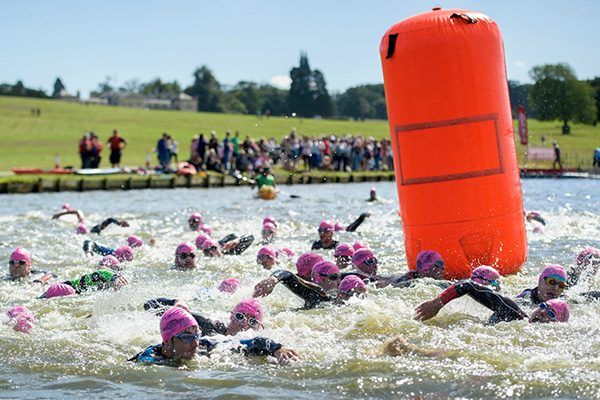 With their glut of events at Dorney Lake, Human Race are the masters of the beginner triathlon. So it’s no surprise that their sole middle-distance entry, the Woburner, makes this list.

The race begins with a one lap swim in Woburn Abbey lake, before a lapped route through the Bedfordshire countryside. The run takes in tree-lined avenues and the Woburn Safari Park before a finish inside the Abbey grounds.

And waiting for all Woburner athletes is a free burger, a Woburger if you will, which is all the motivation we need to crawl to the finish line… What are you waiting for? Enter here 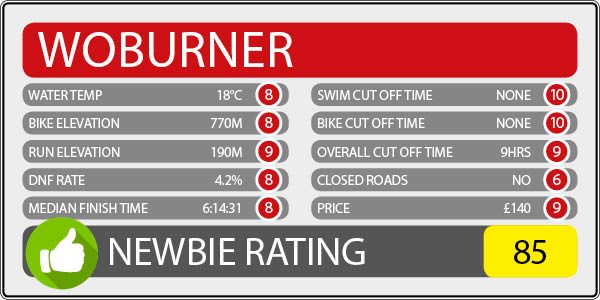 Much of the appeal for newcomers of the Cotswold Classic will be the low-key, manageable logistics, which combine with the beginner-friendly course in the Ashton Keynes water park.

Like its Cotswold 113 sibling, the swim takes place in calm, clear and predictable waters and sighting is easy due to the large buoys and several landmarks. Onto the one-lap bike course and there are some gentle climbs in store as the course weaves through traditional Cotswold villages.

Athletes will experience a mix of tarmac and hard pack pathing for the half marathon run, which takes in lakeside paths and local village routes before finishing back close to the lakeside transition in the finishers area.

There’s also a refreshingly relaxed approach to the cut-offs, as race organiser Graeme Hardie explains. “Although we have an ‘official’ overall cut off of 8:30hrs, in reality we’re very flexible with it and as long as the competitor hasn’t gone to the pub on the way around for a 2hr carvery dinner, we’ll keep the finish line open for them within reason. We don’t have specific swim and bike cut off’s and the water safety crew will allow you as long your like in the water as long as you’re not a danger to yourself, and the bike course police and aid stations will start to wind down around 6hrs from the start of the race, but the competitor is welcome to continue.”

And to reduce any race-morning stress further (providing you don’t mind sleeping in a tent before a race), there’s also camping available in the field 100m from transition. 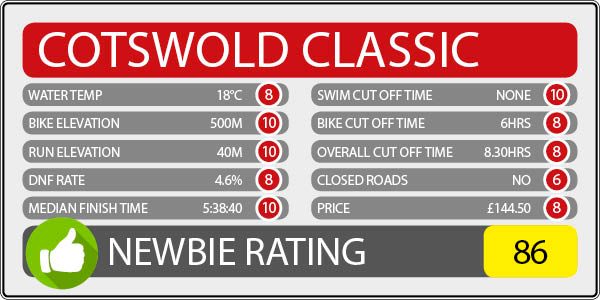 Ironman-distance triathlons: guide to 7 of the UK’s best

Sprint & super-sprint triathlons: 14 of the UK’s best for beginners