Mid December and the 220 offices are buzzing with deadline, deadline, another deadline, strewn gear and half-empty (or full depending on your mindset) boxes of mince pies.

So against a backdrop of heavy festive workload and office carpets that lost aesthetic dignity many moons ago, it was with relief and glee that we accepted an invite to the FA’s new performance centre at St George’s Park, Burton.

You’ll probably remember its official opening last autumn when the royals lined up with the England football team for a day of photo shoots and perma-grins (www.bbc.co.uk/sport/0/football/19886610).

We love Lycra, but several members of team 220 are also loyal football fans, despite the erratic entertainment offered by favoured clubs Southampton, Spurs, Plymouth Argyle and Borussia Monchengladbach (art ed – he loves a syllable or 10). So personally it offered a lot. But why the invite to a tri mag? What would it provide for the fittest community in the UK?

As it turns out, rather a lot…

We were invited to St George’s by Perform. Perform are part of the Spire Healthcare group and are based at St George’s to offer their expertise with regards to: sports medicine, rehabilitation and sports science.

And that’s why Perform were keen to parade their goods to triathlon – these facilities aren’t just football-specific; they’ll also appeal to elite and keen age-groupers across many sports.

We (myself and Matt) were shown the Wembley-replica pitch (where synthetic grass is weaved into the real grass for greater consistency and longevity) and flirted with the indoor pitch, which at the time hosted a coaches’ coaching session. The youth footballer inside couldn’t resist a quick game of keepy-ups. Sadly, it was more Barry Town than Barcelona.

But that was it for the so-called beautiful game. It was time for business and testing the claim that this’ll appeal to goal-oriented triathletes. 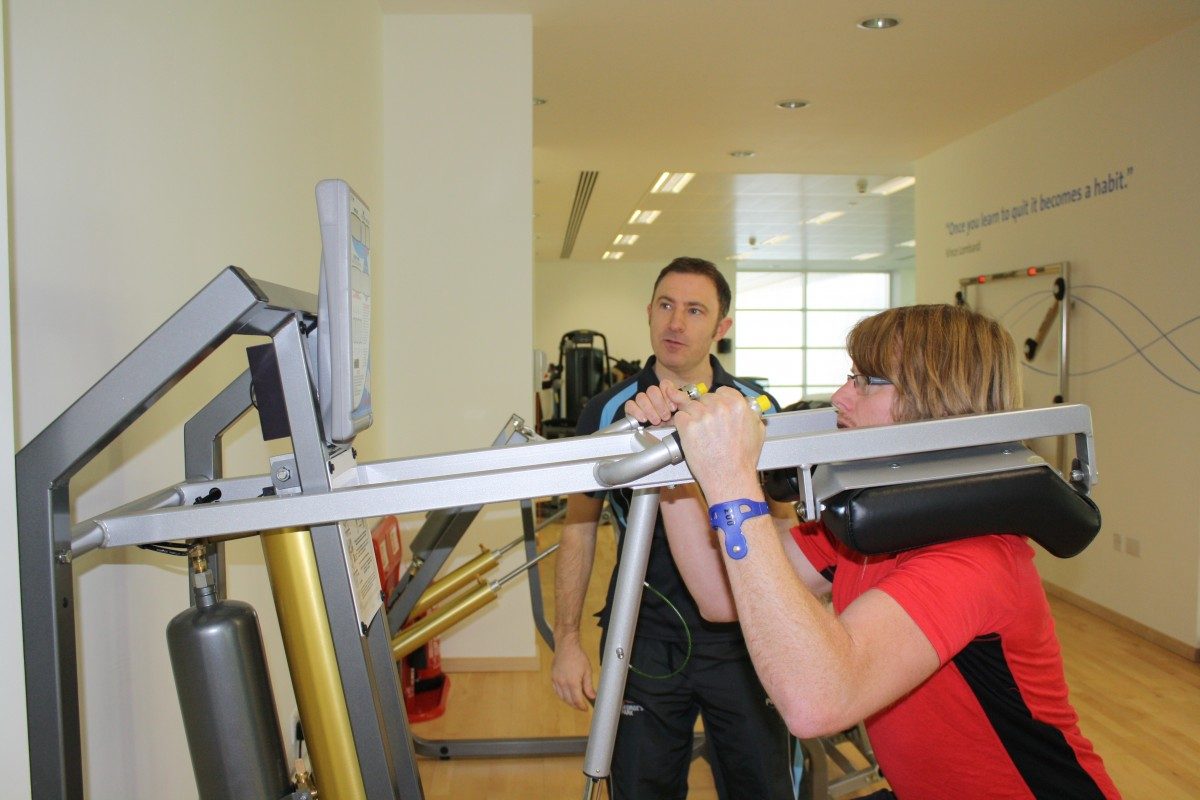 So before I could say ‘1966’ I was in the squatting position, nestled in a machine that monitors your power output on each squat. Via air-pressured control, Jon could then decrease the weight to percentage of my max depending on whether I was after endurance, strength, power…

I didn’t match Chris Hoy; in fact, the power test and subsequent set left me dizzy. (While not at my fittest, this could have been more to do with the foundations of the following week’s norovirus!)

Clearly in a state of bother and confusion, Jon took pity on me and let me have a stab on the Batak board. You’ll probably recognise this contraption. Basically, it’s a square metal frame with a number of discs strategically placed around it. Like that seaside arcade game that involves hammering a poor alien back into its hole when it pops its head above the parapet, when the disc illuminates, you whack its lights out as quick as possible. It improves reaction times and hand-eye co-ordination and is extremely fun. Our 30-second efforts equalled about 35 hits.

Not bad, we thought, until Jon told us the F1 record is 138 in 60secs by Fernando Alonso. Which, as it turns out, isn’t as good as this chap –http://www.youtube.com/watch?v=cyy4lqRERJM. It’s not tri-specific but an example of the top-end equipment you’d rightly expect at this £100-million project.

What impressed most in this area, though, is purely geographical. As many of the athletes using it would be recovering from injury, the designers adopted a model used in Holland where the rehab gym overlooks the indoor football pitch. Apparently, recovery time is significantly improved if the injured can see the end point in front of them – namely, their teammates practising in front of them. 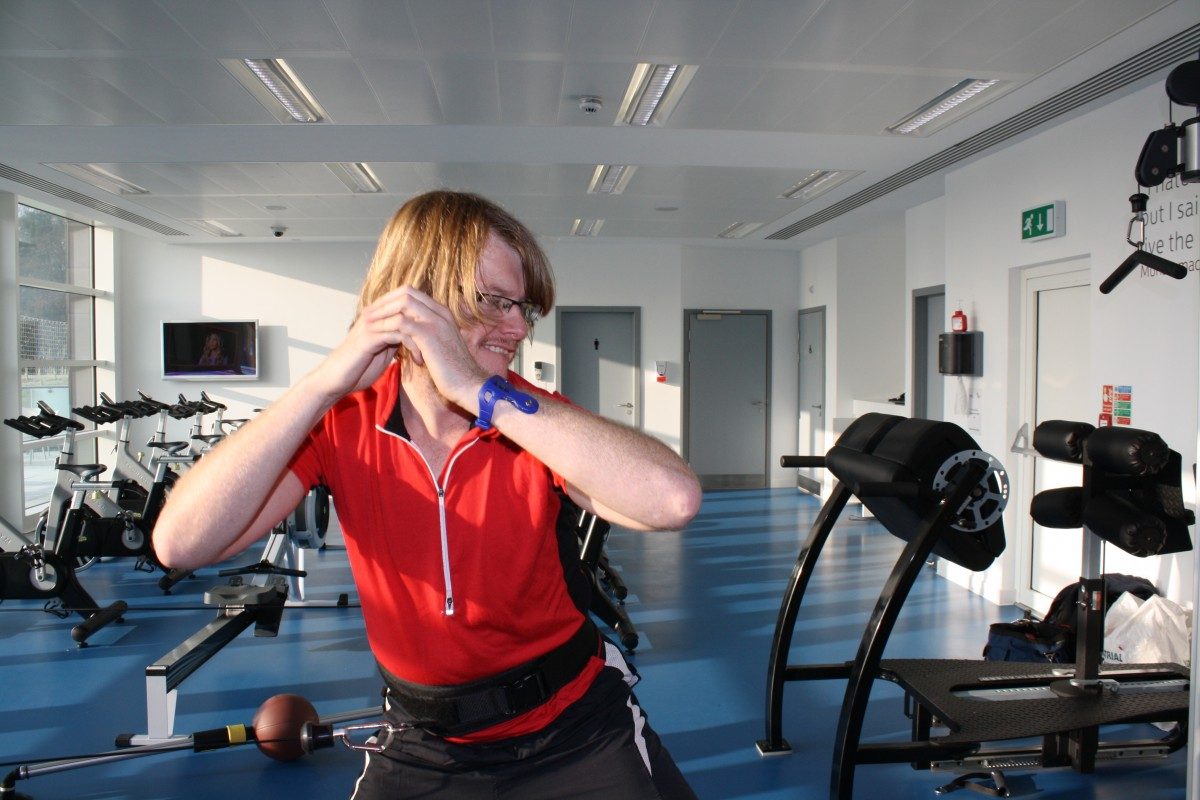 We then move into another strength and conditioning area that consists of Kinesis gym machines that are simply clever.

Instead of the usual longitudinal or lateral planes traditional gym machines elicit, these employ grip cables to replicate a greater number of planes and so enable more sport-specific movements.

Many gyms feature them but not the ones we use and we were impressed. Jon insists on a circuit-training session, which leaves us acknowledging a clear disparity between our relatively respectable lower limbs and upper-body watt output of a keyboard basher.

Now this area isn’t open to pop in as you choose but would be part of the package for setting programmes or assessing fitness.

Clearly sensing our dipping energy levels, the rehabilitation area is next. Now this would clearly appeal to the triathlete. 3D motion sensors, altitude chamber and Watt Bike all have tri-specific benefits, though the Zero-G treadmill provides the standout moment. 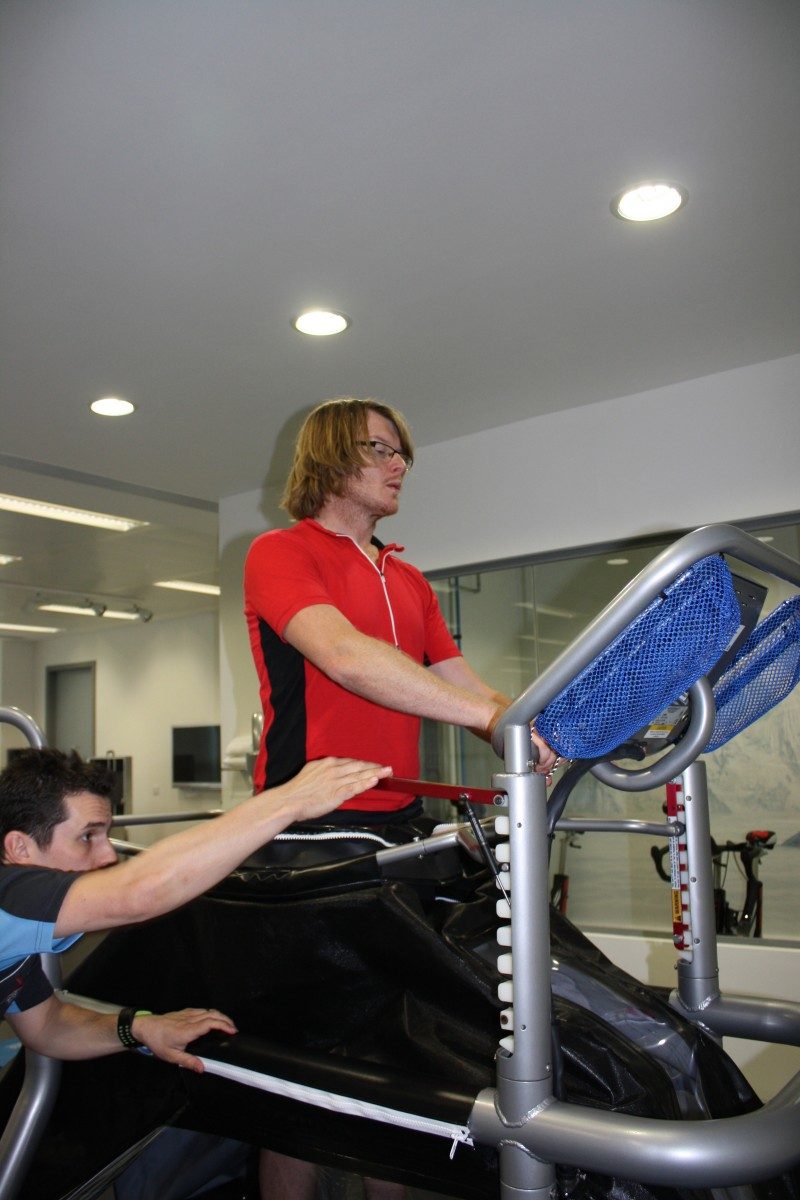 Anyone at The Tri Show (aka TCR) last year will have seem them in action but this was the first time we’d had a Zero Run. The concept is simple. A treadmill is encased with a tent-like construction with a hole in the middle. You adorn neoprene shorts that feature a large stormflap with zipper. You then step into the hole, connect to the tent and voila – an airtight container.

You’re now in place to experience Zero-G, which basically involves the tent inflating so that your weight is supported by air. How much air is pumped in depends on where you are on the path to recovery. First steps and about 70% of your weight could be supported. As your joints, muscles and bones begin to heal and strengthen, that percentage is reduced until you’re back to supporting your total weight.

All of this is under the guidance of one of Perform’s experts and is a great piece of kit that you’d struggle to find near you.

END WITH A SPLASH

But the piece de résistance has to be the hydrotherapy suite, the highlight of which is the Hydroworx treadmill. Essentially it’s an underwater treadmill and, like the Zero-G, is great for rehabilitation as it supports your limbs. You can watch your technique via the underwater cameras and you can even massage sore limbs via resistance jets of water.

We finish off with a dip in the contrast hot/cold pool before making the journey back to Bristol. Overall, a brilliant day in a brilliant facility but, I hear you mutter, what are the pros and cons for triathletes…?

Overall, anyone interested in improving performance can’t fail to be impressed with what’s on offer at St George’s. While much of it is clearly football focused, there’s enough for other sports, including triathlon, to warrant the outlay. After watching the national team fall behind the world, we’re still bitter it took so long for the FA to build the replacement to the former FA School of Excellence at Lilleshall but at least the result is world-class.

There are several packages available at St George’s Park. Find out more at www.spireperform.com/st-georges-park