Sport nutrition: could carb-loading be at an end for triathletes?

Endurance athletes who restrict carbohydrates burn more than twice as much fat as high-carbohydrate athletes.’ The headline-grabbing study from Ohio University made news as ‘fat expert’ professor Jeff Volek proclaimed it the highest fat-burning rates he’d ever seen.

Volek had the subjects run at 64% of maximal oxygen capacity for 3hrs to determine metabolic response. The low-carb group’s fat-burning rate was 2.3 times higher than the high-carb – 1.5g per minute compared to 0.67g.

“This represents a paradigm shift in sports nutrition,” says Volek. “Maybe we need to re-examine what we’ve been telling athletes about carb-loading for the last 40 years.”

Volek’s suggestion that endurance athletes switch from a high-carb to a high-fat diet to race stronger for longer isn’t confined to the labs. Cycling teams such as Tinkoff-Saxo and Team Sky are known for fuelling their winters on a high-fat diet… then reverting to a high-carb diet as the race season approaches.

The study revealed that during sub-maximal exercise, fat contributed to 88% of the low-carb group’s expenditure compared to 56% in the

high-carb group. Ultra-endurance athletes, such as recent Deca Worlds victor Dave Clamp, race at a lower intensity than a sprint- or Olympic-distance athlete. The shorter, faster distances demand a more maximal effort and there’s irrefutable proof that at high exercise intensities (over 80% of VO2max), carbohydrate is the main fuel regardless of diet. This might not be a problem. “Keto adaption [your metabolism shifting from relying on carbs to fat] increases fat oxidation across intensities,” says Volek.

So what does all this mean for you? 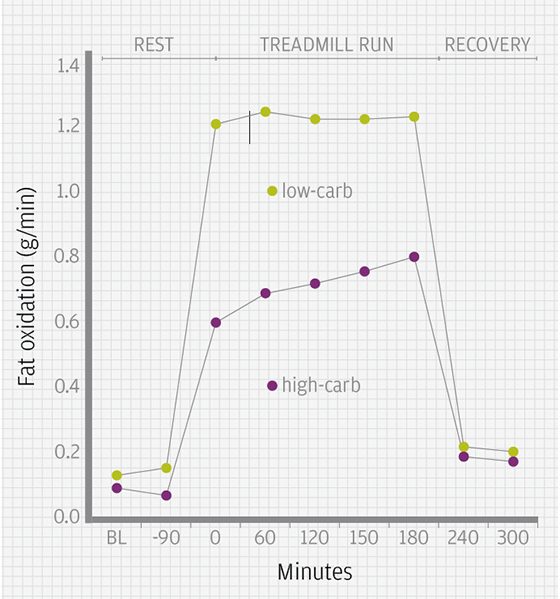 Note how the low-carb group not only burns more fat during exercise but at rest and recovery too.