Run shoes: 9 of the best reviewed for training and long distance races

For aerobic training runs and long-distance races, you should demand a trainer that offers support and optimum energy return. Jack Sexty tests 9 pairs

Choosing running shoes is a minefield, and all too often runners will plump for the option that’s on sale, looks the best or their mates have recommended. Yet, sadly, injuries are all too common in recreational and competitive runners alike, with a recent peer-reviewed study suggesting half of all runners will suffer some sort of injury within a calendar year.

If we’ve still a way to go before running shoes are optimised for injury avoidance, it’s not for want of trying by running shoe brands. Most shoes aimed at long-distance runs feature an array of hi-tech midsole materials to soften impact and give energy return to your stride.

Pronation: what it means and how it affects your run shoe choice

Running shoes buying guide: what to look for

To cater for a wide triathlete audience, there’s plenty of  variety among the 9 pairs on test here. The emphasis may be on suitability for year-round mileage and training, but there are many options on test, from the oversized ethos of Hoka One One to the ‘clouds’ of On Running.

So, while some of these won’t be supportive enough for you, some will be too supportive and others might just not fit your foot shape. Some will even double as a race-day option, especially for those racing long-course triathlon.

Our key advice is to always try before you buy, take a test run and get a proper fitting before choosing your everyday running shoe. Your joints will thank you for it… 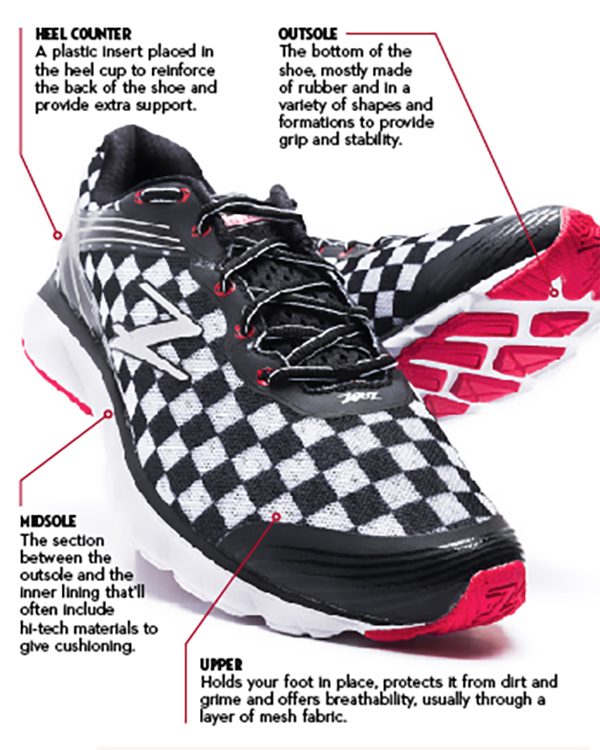 How we tested
Mileage run shoes require lots of miles, so we went out and ran. A lot! Each pair was taken on multiple long runs of between 9-13 miles, and then various shorter runs on gravel, grass and treadmills, some at pace to see how versatile each shoe was when used at varying speeds. A long test period meant each shoe was used in dry and rainy conditions, so we could really test the grip and traction each shoe had to offer in all weathers. Our main tester trains at 6:40min/mile, but we also consulted two fellow runners for their verdicts. Runner 1 averages 8min/mile over 10km, and Runner 2 averages 10min/mile over a 6.5km. All weights quoted are for one shoe in a UK size 10.5. 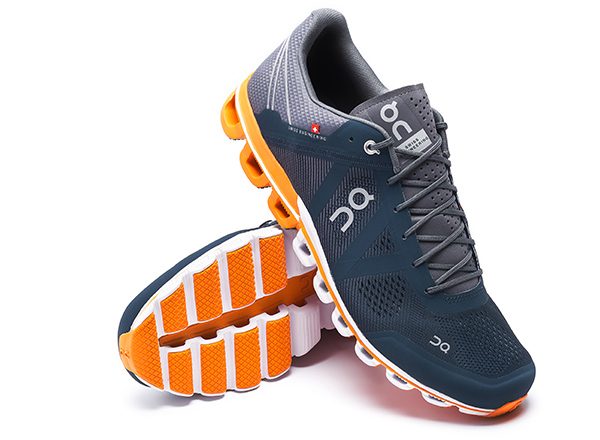 As the run shoe that Tim Don wore to a blistering 7:40:23 Ironman finish in Brazil, the 258g Cloudflow doesn’t fit obviously into the mileage shoe category. Yet the cushioning offered by On’s patented lugs is adequate for a wide range of runners, and will serve you well for half-marathon distance and beyond if you don’t require a high level of cushioning. The 18 lugs here essentially replace the foam and gel midsoles seen on other shoes, and we love the spring they put in your step. They can get squeaky in the rain, things can get stuck in the lugs and grip is slightly compromised, but only in icy conditions. The Cloudflow may be too aggressive for steadier runners, but as a training and/or marathon shoe they’re spot on. on-running.com/gb

Verdict: The sole will divide opinion, but we love them! 85% 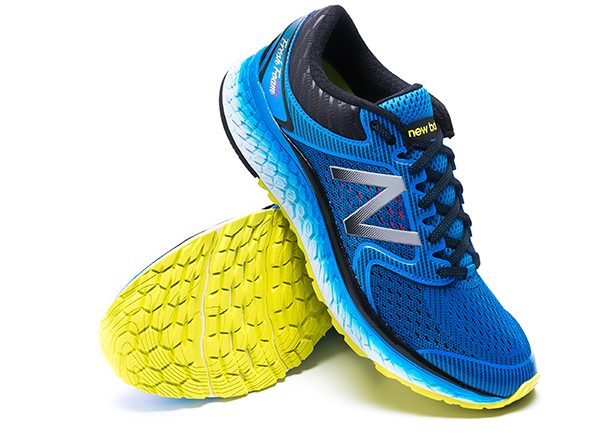 With plenty of cushioning, the 336g Fresh Foam is one of the most supportive options on test. Saying that, we found the ‘Fresh Foam’ a bit too solid, making us feel lethargic when the pace ramped up on our test runs. This is where New Balance could learn a trick from Saucony with their cushioned shoes, and these could do with another layer in between the midsole and upper to swallow up some impact. At slower paces they towed us along adequately, but the density and lack of ground contact underfoot isn’t ideal if you’re averaging under nine-minute miles for training or racing. The outsole is almost like a trail shoe and gives good traction, making it a good entry-level shoe for mixed terrain. newbalance.co.uk 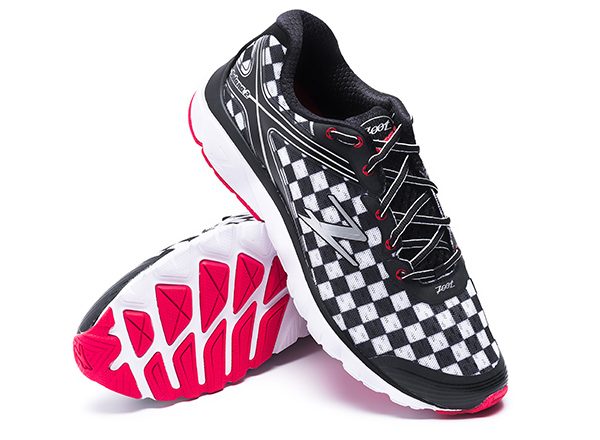 Zoot’s Solana 2 is unchanged for 2017 apart from its new ska-esque design. Having used these before, our verdict is also unchanged: it’s a beast that doesn’t really feel balanced. Looking at the huge carbon rubber outsole and the minimal upper, it’s apparent that it’s aimed at those who want support but also a lot of venting for hot days (Zoot was founded in Kona, after all). But it doesn’t really cradle your foot and just feels quite flimsy, while the bottom of the shoe feels too heavy when you want to speed up. So the Solana 2 might appeal to those who want a shoe for long-course tri in an exotic location, but it doesn’t really cut it as an everyday option. And those who like the minimal upper won’t appreciate the bulk underneath. zootsports.com 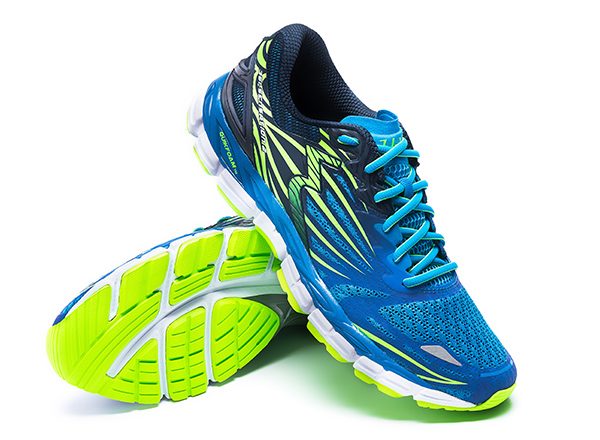 361° are new to the UK, with their range mostly consisting of supportive and stability shoes. The upper is a nice breathable mesh and there’s a ‘Quickfoam’ layer in the midsole, a blend of EVA and rubber that provides responsiveness through the stride. We wouldn’t go as far as saying ‘instant responsiveness’ as 361° do, as it felt a bit lost in between the very sturdy and robust sole and the upper. But for us, it gave a softer and more responsive ride than both the New Balance and Asics shoes on test. Overall, the Sensation 2 is a suitable training shoe for those who want plenty of cushioning for their steady training runs, or the recreational runner looking to tackle longer distances with plenty of stability. www.361europe.com

Verdict: Too firm for us, but ideal if you want support 81% 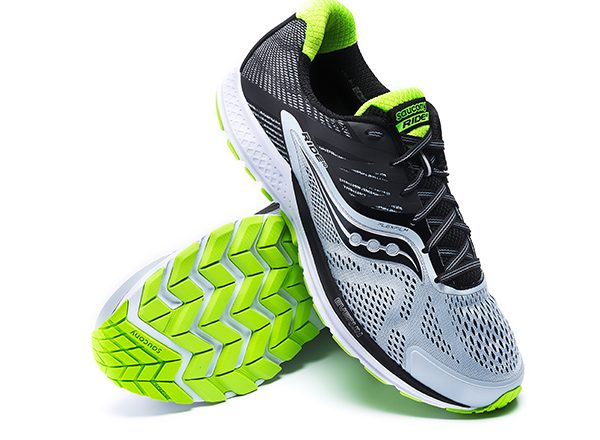 Any shoe that reaches its 10th iteration must be popular, and we can see why the Ride 10 continue to strike a chord. There’s some flex in the forefoot, which means you can ramp up the pace and get a good toe-off, while Saucony’s Everun continuous cushioning in between the sockliner and midsole provides a stable feeling underfoot. This is complemented with an additional ‘Tri Flex’ outsole to absorb impact and, though it’s only a small difference, we felt this shoe was more comfortable and smooth than any other shoe on test. At 308g they aren’t the lightest, but the Ride 10 meet nearly every requirement for a great mileage run shoe and will be suitable for most runners looking for a comfortable, responsive ride. saucony.com/uk 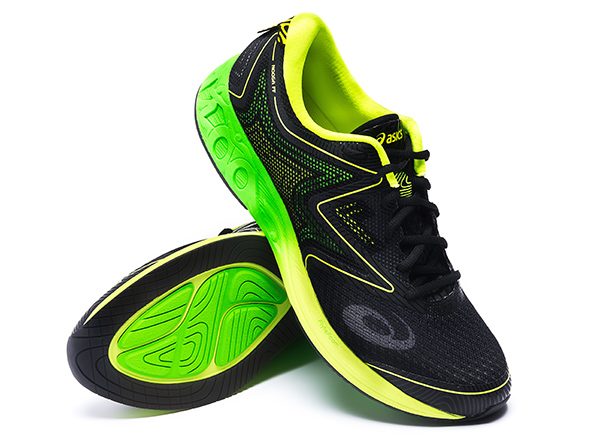 The Noosa FF is fairly light at 275g, thanks in large part to the soft rubber one-piece midsole. While all was well with the level of cushioning, the heel counter was too firm for us, actually digging into our heel while running. Another thing is the lack of flexibility; if it’s possible for a shoe to be soft yet at the same time rock solid then this is it: the ‘Flyte Foam’ material is soft to the touch but the shoe is completely rigid, creating a hard landing and limited support through the stride. The upper is more to our liking, with soft mesh that provides good breathability. This isn’t our favourite from a brand that’s usually up there with our test winners, and we’d recommend Asics’ DS Trainer as a better do-it-all option. asics.com/gb 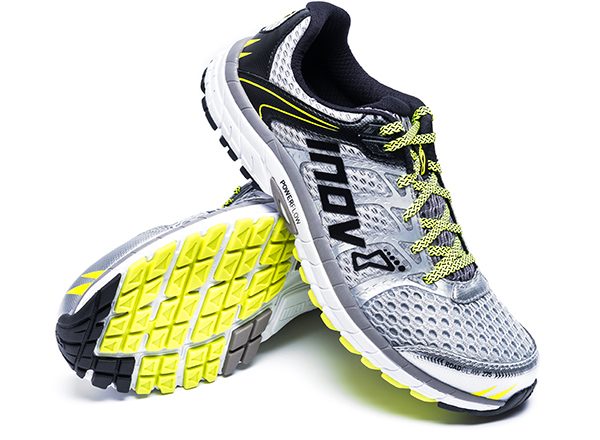 Inov-8 are better known for off-road shoes, and the Roadclaw 275 is billed as a trainer with a neutral ride. It’s one of the heaviest shoes on test at 342g thanks to heavily layered mesh with a very firm midsole, but this does increase comfort. Inov-8 also offer the Roadtalon shoe for racing, with the same grippy sole, but we
found that ride a little flat and unforgiving. The cushioning in the Roadclaw really balances out the firm midsole, however, and we found faster efforts easier and more enjoyable in this shoe. Being Inov-8, they’re of course suitable for off-road adventures, too, so they’re a good option if you want a do-it-all shoe for running on the road and occasionally light trails.
inov-8.com

Verdict: Another fine effort from the off-road specialists 80% 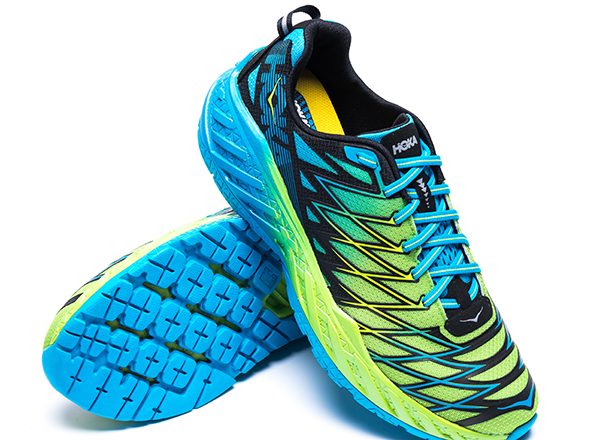 With their unusual looks and huge soles, Hoka continue to divide opinion eight years after two former Salomon employees founded the brand. The Clayton 2 is their latest lightweight shoe and, despite the big platform, our 10.5s weighed just 240g. We were dubious at first but we’ve grown to love the Clayton 2s, and we’d agree with Hoka’s description that the shoe ‘shouldn’t make sense, but it does.’ We’ve never used a shoe that looks so big yet makes you want to move so fast, the only problem being that all our steady runs turned into tempos by halfway. We’d still want something lower to the ground for racing, but the Clayton 2s have become our go-to option for steady training runs. 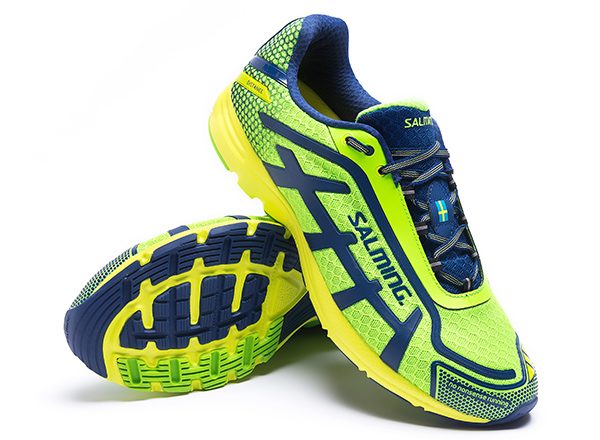 The Distance D5 from Swedish brand Salming (now available in black instead of the Gecko Green seen here) has a 5mm drop and weighed in at 239g, so this isn’t really a mileage shoe for plodders. The upper is dual-layered with air mesh for breathability and tri-friendly net mesh for water drainage. The rounded heel cup isn’t too firm, and it moulds around the heel neatly without causing any irritation. The Runlite midsole absorbs negative impact and gives energy return at the toe-off phase, making for a light and springy ride at mile 10 and beyond. We’re fans of the D5 as a lightweight all-rounder, but if you over- or under-pronate and heel strike? Then it might be too aggressive for distances above half marathon. salming.com/uk

There’s a real variety of shoes on test here that’ll suit different runners for different purposes. We can categorise the Salming Distance D5, On Cloudflow and Hoka Clayton 2 as shoes that’d probably be too unsupportive for a 5hr marathoner; yet they all come highly recommended for a well-trained runner looking for a marathon shoe that offers mid-level support.

We felt Asics’ Noosa FF and the Fresh Foam 1080 from New Balance both gave a bit of a rough ride, and between these and the other shoes offering a high level of support and cushioning, the Zoot Solana 2 and 361° Sensation 2, the latter edges it. We also liked Inov-8’s Roadclaw 275, it’s got great grip and is built to last.

This tester will personally be wearing the Hoka’s Clayton 2 after this test. If you’re a competitive runner looking for a training or ultra-distance shoe, this is absolutely the one. But, all things considered, our overall winner is the Saucony Ride 10. The heel counter offers a great form fit, it’s got a very comfortable mesh upper and it’s not too heavy, giving it mass appeal to suit most runners.

Triathlon run shoes: 10 of the best for racing the run leg

All images by The Secret Studio