I spend a lot of time answering questions from athletes with the same underlying theme: “Something’s not right. I’m not making any progress – what should I do?” As often as not, the problem has to do with a basic mistake they’ve continued to make in their training. There are three errors every triathlete makes at least once in a season…

How many times have you been out on a run, climbing a hill on your bike or swimming a set of intervals, had a niggle and decided to press on through it? ‘I’ll be okay,’ you think. ‘It’ll go away.’ But it doesn’t. You finish the workout anyway. And there it is again the next day. Nothing really bad. Just something that isn’t quite right.

‘It’ll go away,’ you think. And maybe the next day it’s slightly better. Or at least you think it is. Hard to tell sometimes, isn’t it? Until, after a few of these ‘It’ll go away’ episodes, the darned thing finally becomes inflamed. It’s definitely an injury now. So what do you do? Amazingly, some athletes still train as if nothing’s wrong. They eventually find they wind up with an injury so bad that they miss days, weeks or even months of training.

So what should you do? At the first sign of tightness or discomfort, stop the workout, assess the problem and do something about it – now. That ‘something’ may involve seeing a sports doctor, physiotherapist, massage therapist, podiatrist, chiropractor or other professional. If unsure, start with your GP.

There are other possible solutions. It could be that you need to stretch more. Or that you have a muscle imbalance. Maybe your equipment needs adjusting or even changing. Or perhaps your technique’s wrong and you need someone to help you fine-tune it.

It’s amazing what rest can do for a slightly tender joint, tendon or muscle if it’s caught early enough. Back off for a while at the first sign of a potential problem – no amount of fitness is worth an injury. Which takes us to the next common mistake…

After a bad race, what do most triathletes do to correct the problem? Train harder. And what does that mean? Turning previously easy days into hard workouts. In other words, leaving out the recovery. ‘That’s for mere mortals. I’ll whip myself into shape with extra hard training and plenty of it,’ you think. Think again.

What you should do instead is decide if it really was a bad race. Have you checked your own power numbers and pace charts? I’ve seen athletes have really good races and not know it because they were comparing themselves to the best, who all happened to show up for the event.

Maybe it wasn’t your type of course. It was hilly but you’re not a climber. Or it was hot and you train only in cool weather. If you do decide it was a poor performance and your fitness isn’t what it should be, then decide what needs to be done about it. Training harder is probably not the answer.

You may need a coach to help with this decision and plan a course of action. Plus, you might need to rest more, not less. Most self-coached athletes push themselves too hard. When I start coaching someone they usually do less than they did on their own – and still get faster.

3. Pumping up the volume

This is probably the most common mistake. When things aren’t going well most triathletes add on more volume. I don’t know why but ‘do more’ is almost always considered the best solution.

Most believe that the number of miles and hours done in a week is the best predictor of Ironman success. It isn’t. The most critical aspect of training is race-specific intensity, combined with race-specific duration. That means focusing on key workouts. It’s training quality, not quantity, that determines race performance.

In most of the last 12 weeks leading up to your Ironman-distance race (the ‘build’ period), triathletes should have one key workout in each sport, including a combination workout that simulates a portion of the race, especially the bike-to-run portion. These workouts are done at race intensity or slightly higher, on a course that simulates race conditions as much as possible, and for long durations relative to your goal split times.

The other weekly workouts, by way of contrast, are there to hasten recovery and to maintain technique and economy. These should be short and easy sessions.

By focusing on three or four key workouts each week, with short, easy workouts between them, your weekly volume may actually be less than it was in the late ‘base’ period, which preceded the build period. That’s alright. Focus on quality training.

Avoid the common mistakes outlined above and you’ll be destined for success because you’ll be training with consistency and purpose. That, ultimately, is the greatest determiner of success in triathlon.

The example below shows how long an Ironman-distance athlete should spend in the respective training zones during the build period. In our example, the athlete is training for 12hrs per week. One method of calculating your ATHR is to run or bike flat-out for 30mins and note your average heart rate for the final 20mins. 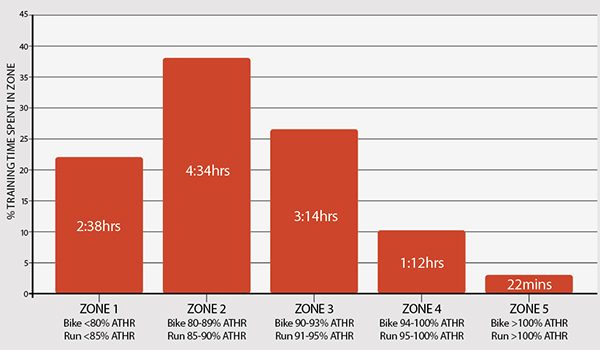 For more on Joe Friel’s training methods go to joefrielsblog.com

14 of the best sporting films and documentaries to watch