Most triathletes know that iron helps to form those red blood cells that transport oxygen to your muscles – and that iron insufficiency causes performance-sapping anaemia. However, you may be less aware of how difficult it is for the body to absorb iron, and how easily it’s lost through training.

Iron is ‘locked up’ tight in many foods (especially non-animal foods), making its release into the bloodstream difficult. Even in foods with readily available iron, uptake can be considerably reduced by the consumption of other iron-blocking foods or drinks. One of the worst culprits is tea, which contains tannic acid that binds iron strongly.

Another problem is iron loss. For example, menstruating women lose on average 28mg of iron per month – easily doubled if periods are heavy or intrauterine devices are used. There’s also growing evidence that attributes heavy losses to endurance training.

Such iron loss has been confirmed in other research. One comprehensive study found it was a particular problem in runners, but even elite swimmers undergoing heavy training showed large drops in serum ferritin. In this study, the serum ferritin reduction was paralleled by significantly higher levels of something called serum transferrin receptor (sTfR) concentration.

In the past, a simple blood haemoglobin test was thought sufficient for determining iron status; the ‘normal’ range is 12-16g/dl, with anything under 12g/dl signifying iron anaemia. However, research has indicated that you can actually be iron deficient in the tissues without being diagnosed as iron anaemic. sTfR, however, is a highly sensitive indicator of tissue iron status.

When cells require more iron, they signal this need by increasing the number of transferrin receptors on their surface. A small portion of these receptors come off of the cell surface and are carried into the bloodstream, and these are the levels that are measured.
A high sTfR is, therefore, related to iron deficiency at a truly fundamental level – within the cells or tissues.

One study gave 41 iron-depleted, but non-anaemic, female subjects a twice-daily iron supplement or a placebo for six weeks. As expected, iron supplementation significantly improved several markers of iron status, including serum ferritin, transferrin saturation and sTfR concentrations, yet this occurred without affecting blood haemoglobin concentrations. What’s fascinating, however, is that in the women whose sTfR levels had been greater than 8mg per litre, taking extra iron produced a significant increase in VO2max beyond that produced by training alone (remember, higher sTfR levels indicate that cells need more iron). Conversely, in women with sTfR levels below 8mg per litre, there was no significant benefit of iron supplementation.

Even a mild shortfall of iron can reduce endurance capacity and the body’s training response to endurance exercise – exactly what triathletes don’t want. Iron is also difficult to absorb and can be depleted by endurance training, compounding the problem, especially for younger female triathletes. The most solid advice is to assess your risk for iron deficiency (see the box below), consume an iron-rich diet (see box to your left)
and consider taking an sTfR test. 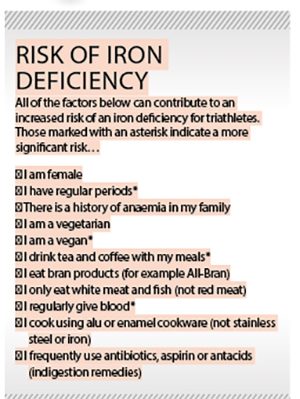 2. If you want more dietary fibre, don’t use bran products (which block iron absorption); instead, get it by eating wholegrain breads and cereals.

The vegetarian triathlete: what to eat if you are meat-free

Nutritional supplements lowdown: when and what to take

Vegetarian fuelling for an Ironman

How can I alleviate chilblains?

How does running affect your cartilage?