The hills are alive with the sound of… groaning, gears clunking and scrambling up rocks. Welcome to the Austria eXtreme, one of the toughest 226km days on Planet Earth…

While it may include an extra vowel to the Xtreme family of the Norseman, Celtman and Swissman, the comparisons between that famous trio and the Austria eXtreme are understandable.

The Graz-set long-distance race starts with a 3.8km swim in the 14°C Mur river, followed by a point-to-point 186km bike containing 3,900m of vertical gain and a 43.6km ‘run’ with 1,900m of climbing, which finishes at the foot of the Dachstein glacier in the North of Styria.

As in the Swissman (that also sees you travel across nearly half a country), in order to be fully awarded as a finisher you must hike the last section with your support crew and cross the finishing line with them. Simply, the Austria eXtreme – which has just 125 race slots chosen by a lottery – is an event that closes the gap between a normal triathlon and a wild adventure. And finisher t-shirts don’t come much rarer than this…

1. I didn’t do real altitude training. The race isn’t super high: the max is 1,910m. At this time all of the athletes have other problems than dealing with altitude.

2. Make sure you choose to pack a windproof bike jacket. It’ll especially be needed on the long downhill sections on the bike course.

3. Bring a big pack of mental fitness! The race has four mountains on the bike – and headwinds. So don’t bring a disc wheel, but do take a low-gear cassette. 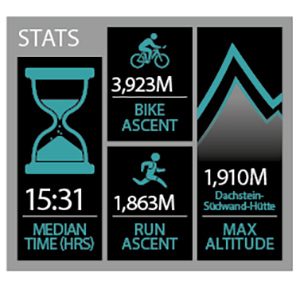 Set in the picturesque and dramatic scenery of Llanberis in Snowdonia, northern Wales, the Half Brutal is the shortest brother of the increasingly (in)famous Brutal family, which also includes the full 226km length and a double.

The swim section takes place in the chilly Lyn Padarn lake’s water (two laps). What follows is worth the race name: a two-lap bike with 1,524m of vertical gain in total, one 8km lap of running around the lake to stretch the legs, and the final climb to the top of Snowdon, the highest mountain in Wales… and a leg-sapping run back down again.

1. I planned the year based on climbing on the bike. I also did Alpe d’Huez Triathlon, many hill repetition sessions and went to Snowdonia for a recce of the bike and run courses.

2. People use road bikes, but I used a TT and felt comfy. It’s compulsory to have extra layers in case of bad weather. Use trail shoes with more grip as normal run shoes lack grip.

3. Be prepared to race in the wind and wet and bring clothes for all conditions. For the bike: long sleeves, a waterproof and arm warmers. For the run: waterproof jacket, hat and gloves. 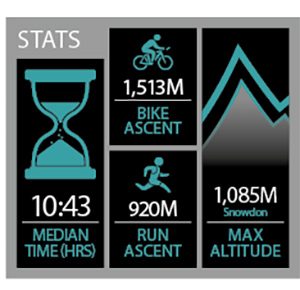 Welcome to Hell! Word-of-mouth has seen this event become a genuinely iconic race on the UK scene for over a decade, with the climbs of ‘the Struggle’ and Helvellyn two of UK tri’s most famous rites of passage

The distances of Helvellyn sit away from the trad conventions of the standard- or middle-distance genres, and for good reason: Helvellyn isn’t your normal triathlon.

Long claimed to be the toughest course in the UK (a young Alistair Brownlee broke the course record in 2007), the legendary event begins with a wincingly cold swim in the calm waters of Ullswater Lake (the lap is shortened when the water temp is lower than 13°C). The 61.2km bike route is made legendary by the appearance of ‘The Struggle’ over Kirkstone Pass at 44km. Climbing 400m in 5km, it’s an absolute beast loaded with 20% ascents that can force even the most hardened and experienced of triathletes to push their steeds skywards.

The final 14.5km run route continues to pile on the punishment, reaching the peak of Helvellyn (at 950m, the third-highest point in England) before a hair-raising descent that’s certainly no picnic either.

Fancy taking on the toughest course in UK triathlon? Over to the brilliantly-named 2015 champ, Bonnie Van Wilkenburg, for his winning advice…

1. Don’t overdo the mountain training, just train hard. But if you only road run, head to the Lake District to practise some trail running and up and down the mountains.

2. Bring a hydration backpack with water and food for the run, and make sure it’s well-fitting. It’s not the longest triathlon but it’s very demanding.

3. Respect the mountains and the weather. Be aware that the mandatory kit is there for a reason and, if the weather changes, you can put on an extra layer. 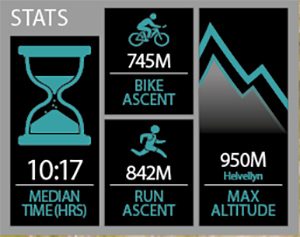 The idea is simple: is a conventional Ironman not enough? Then here’s something more. First of all, the Swiss Alps scenery of the Swissman Xtreme is sublime and dramatic, with the possibility of experiencing all seasons and types of weather in a single day (snow included).

As part of the Xtreme triathlon races, Swissman Xtreme – along with its Celtman and Norseman siblings – is definitely one of the hardest and most beautiful races in the world.

The point-to-point course starts with a 3.8km swim at Ascona near the Italian border before the 180km bike goes over three Alpine passes to Brienz in central Switzerland. The run heads towards the majestic mountains of the Eiger, Mönch, Jungfrau and, finally, athletes climb to the foot of the Jungfrau glacier with their support crew. So, if you’re looking for your ultimate tri, then this could be what you’ve been waiting for

1. For bike training, you need to do a lot of climbing and riding downhill. For the run it’s a good thing to train for the uphill, but the muscles also need to be prepared for the downhill.

2. Don’t forget to eat during the race. You need a lot of energy for this (especially if it’s cold) and having a bonk here is no fun.

3. When I travel to Switzerland I take all my gear and winter clothes: jacket, rain jacket, rain trousers, hat, gloves. Be prepared to wear extra layers of clothes. 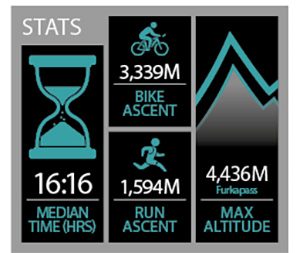