It seems only fitting that in an event billed as one of the world’s toughest endurance races, the 10th aniversary of ÖtillÖ should see an epic battle to the finish.

220 Triathlon were out in Sweden following the events, as 120 teams took on the 26 islands and sea stretches making up Stockholm’s archipelago. In the men’s race, we saw a front group of teams play to their respective swim and run strengths putting on thrilling performances over the 75km swim-run course. Swedish team Addnature Osterjosimmet led for much of the race – no surprise as both members, Simon Borjeson and Rasmus Regnstrand, are experienced racers and used to training in tough conditions, recently completing a swim-run from Sweden to Finland!

Borjeson and Regnstrand completed the infamous 1.4km swim leg of the race against a strong current known as the ‘pig swim’ in just 23mins – a section that takes many competitors an hour. Occurring in the middle part of the race, when athletes have already been facing the gruelling trail runs and sea swims for five hours or more, it is notorious for throwing racers off course and sapping energy.

With a gap of 11mins at one point on the course, Borjeson and Regnstrand were looking strong for the win, however the second part of the race focusses more on trail running, with one section from Orno to Angsholmen totalling almost half marathon distance. With both the 2014 and 2013 race winners on their heels, nothing was certain and in the end it was the other team’s running strength that saw them clinch the victory. 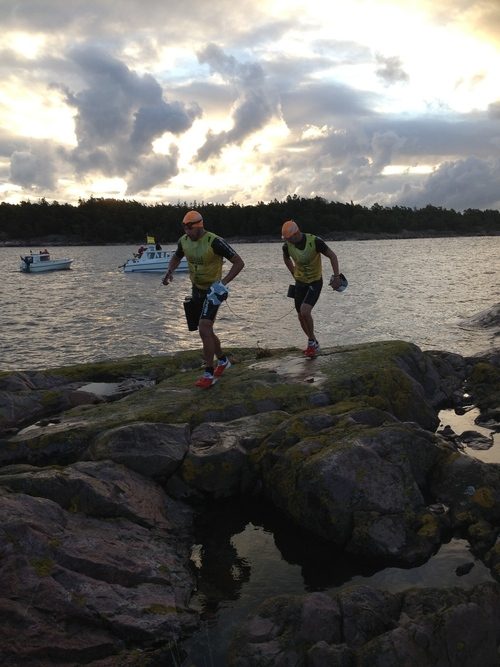 Crossing the line first in 8:29:11 and visibly emotional were Team Head Swimming, comprising Bjorn Englund and Paul Krochak, who won in 2013. “It took so much morale and character for us to catch them,” said Englund. “We kept good pace but had mixed emotions [when we passed them]. We were so tired but we wanted to look so strong! We hammered it to the finish. Paul was so strong, I thought I was going to faint at one point but he kept us going.”

When asked about race conditions Englund said: “The conditions were tough. I don’t think the waves have been this big in my seven years here.” Last year’s winners and course record holders Lennart Moberg and Daniel Hansson came in second, with Borjeson and Regnstrand finishing fourth.

The mixed race was no less exciting, with a course record being set by winners Steffan Bjorklund and Marika Wagner who finished fifth overall in 8:55:39 and took nearly an hour off the course record. Wagner said: “It’s been a great day. We have been solid and not too stressed about other teams or times – just doing our own thing! It’s been a tough race, but solid. Our plan was not to get too eager in the beginning but to keep good pace.”

In the women’s race, first place was taken by Sweden’s Annika Ericsson and Maya Tesch in 10:30:36, while several GB athletes on the course also put in strong performances. Mark Threlfall and Jack Grundy of T3 Triathlon came ninth overall in 9:24:41, while Bike Science’s Ed Charlton-Weedy and Paul Horsfall finished in 10:30:19. Also competing for GB was Pippa Middleton who, along with many other teams, was still on the course at the time of publishing. To find out how her and the rest of the competitors got on, see OtillO’s live tracking here.

We’ll be posting a gallery of images from the race online soon. Plus, don’t miss the next issue of 220 Triathlon for a full feature on the development of swim-run racing including tips on how to try the format yourself.