British racing star compares his hobby to the day job, and looks ahead to this year’s Jenson Button Trust Triathlon

Britain’s Jenson Button has revealed that he still finds jumping into a lake or the sea with a bunch of other triathletes “pretty daunting”, despite being an experienced racer.

Speaking ahead of this year’s Jenson Button Trust Triathlon in Derby this July (see video below), the McClaren Honda driver said: “Before an F1 race I don’t get nervous, it is excitement and adrenaline. I pretty much know what to expect, I have done over 250 races now so I have raced in a lot of F1 races now so I am very at home.

“But when you go and jump in to a lake, or the sea with loads of other people that is pretty daunting, even if you are an experienced triathlete. So I am probably just as nervous, probably more nervous in a triathlon than an F1 race. I think that is always the way it is going to be, there is a lot of adrenaline before any type of race.”

Jenson also speaks about why he loves triathlon, a sport that he has been doing in his spare time for a number of years. “A running race or something like that is easier than a triathlon in terms of the mental aspect as you know you don’t have to jump in the water with a load of people and you don’t have the transitions too which a lot of people fear, going from a swim when you are breathing really hard and then getting on to a bike. It is different but I love that it has three different disciplines and I think that is why it has grown so much over the years.”

After organising his own race at Luton Hoo in Bedfordshire since 2009, Jenson has taken the decision to move it to Markeaton Park in Derby this year. Taking place on July 12th, the race will be his biggest yet with novice and seasoned triathletes from all over the globe, including Afghanistan and Mexico already signed up. A £7,000 prize purse has been confirmed for this year, with a grand each on the table for the male and female winner. 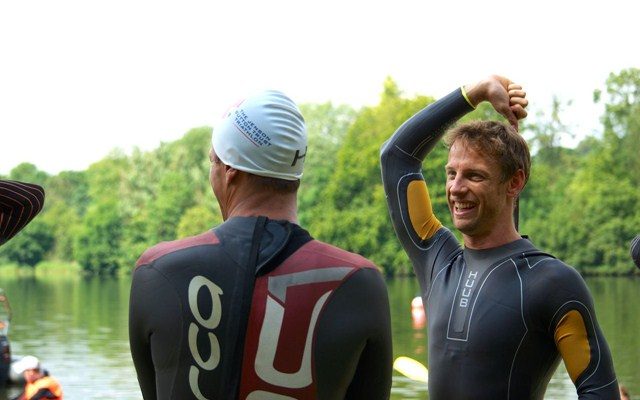 Competitors will get the chance to race twice, with the preliminary heat consisting of a 200m lake swim, 11km cycle and a 2.5km run. The top performers will go on to the final, 400m swim, 20km cycle and 5km run, with the runners up entering the wooden spoon race. For more information and to register head to www.jensonbuttontri.com.

Your favourite tri mag has also partnered with this year’s event, with a number of 220 Triathlon initiatives set to take place over the coming months, including editorial features, competitions and much more.

In terms of changes to the course from previous years, Jenson said that he’s had a lot of input into the new bike route, adding more challenges and flat areas, as well as placing it out on the open road, with most of the roads being closed.

Will you be racing the JB Trust Triathlon this year? Let us know in the comments below!