He has the resting heart rate of a bear in hibernation but the VO2 max to rival any elite athlete. He’s run, swam and pedalled through more (and more gruesome) injuries than he can remember. But he’s not Superman – he’s the Caveman. 39-year-old Conrad Stoltz is one of the most recognised and decorated triathletes there is – and with good reason.

With 20-plus years of racing experience as a professional, he has 50 Xterra career wins and is a four-time Xterra World Champion. He also has three ITU Cross Tri World Titles and is a two-time Olympic triathlete.

“The first year I did the Xterra World Championships in Maui, I won it by 10 minutes,” says Stoltz. “It felt so easy, I told myself I was going to win this thing five times in a row.”

That was in 2001. Since then, the Suunto ambassador and South African athlete has had many trials and tribulations in his quest for five World titles on this course littered with sharp lava rocks and Kiawe thorns: flat tires, mechanicals and crashes turned the ‘five titles in a row’ into four very, very tough Xterra Championship wins.

Born and raised in South Africa, Stoltz started his racing career at age eight when he raced track and field and BMX. By age 14, he had raced his first triathlon and subsequently turned pro upon graduating from high school.

His early years as a pro athlete were far from glamorous though: “I slept on benches and in a Police station (willingly) before a race and I’ve won races on cheap, borrowed bikes,” he recalls.

It’s this hand-to-mouth lifestyle combined with a reputation for being hard on equipment that earned him the nickname ‘the Caveman’. He got into Xterra after the Sydney Olympics in 2000.

“After Sydney I was a bit burnt out and thought I’d just do one or two just to clear my head for fun. But I fell in love after my first race.

“I’d been racing tri since 1988 and it boils down to how much pain you can take — you just go as fast as possible. But with Xterra there’s a whole lot more to it. For a start the courses vary hugely, from volcanic beaches in Hawaii to the mountains of the Alps to the forests of Brazil.

”That adds a new strategy to it, from your suspension setup to what tires you select. Some courses take four to five rides to memorise. But the technical aspect is what makes it interesting. Along with the lactic acid you get a lot of adrenaline and that’s what makes it fun.”

Stoltz continued to compete at both disciplines for a few years, but after participating in the Athens Olympics he chose to focus on Xterra.

Crashing in a dry riverbed 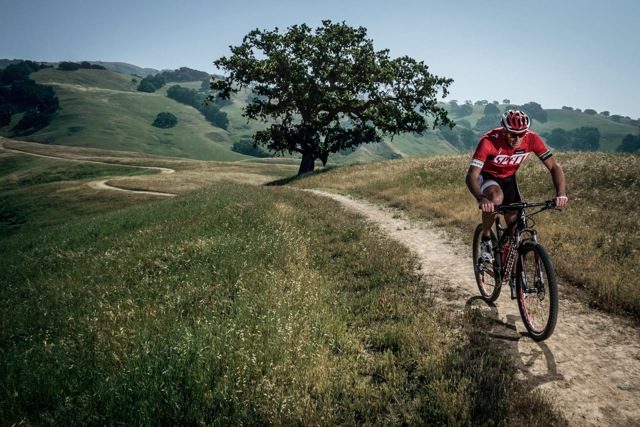 So far, that self-promised fifth title looks tantalisingly in sight. ”It’s been a great season,“ says Stoltz. However, it didn’t start out that way. Although famous for his ability to ride through pain, he suffered an injury that nearly derailed his plans.

“I cut my hand when I crashed in a dry riverbed at the first Xterra in Las Vegas,” he says. “I kept on racing, even though I was bleeding like crazy.”

Five stitches later and the tough triathlete was good to go, right? Not quite.

“The next week I raced the Cross Country and Short Track at Sea Otter Cycling festival and I simply couldn’t hold the bar properly. So I was sitting to one side, favouring a leg. The sacroiliac joint seized up, causing a severe calf injury at Xterra Alabama. I should have stopped right away, but I ran three miles like that, worsening the injury even more.”

Eventually, however, the Caveman realised it was in his best long-term interest to throw in the towel. Pulling up was tough for Stoltz, who has been the US National Xterra champion 10 times over the last twelve years. But it was the right decision. 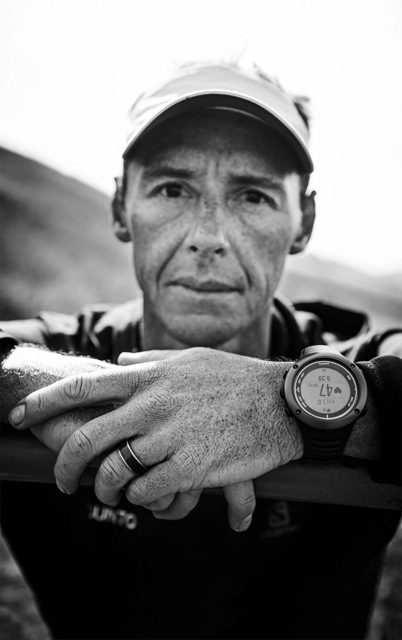 “Brazil was an extremely tough course,” he says. “There were some long sections where you had to carry your bike up 25% climbs and then there were 36% drops but it was a pretty comfortable win.

In Holland I had a one minute lead coming off the bike and in the last 2km of the run I could ease up and enjoy the moment. But Italy was very tough for me. It was a very painful experience. I went into it a little wary of the other athletes but I pushed myself hard and in the end, I won by four minutes.”

All focus is now on this year’s Xterra World Championships in Maui. To get there Stoltz has been following a vigorous training regime devised by his coach, Ian Rodger, which he follows with the help of the Suunto Ambit2 S GPS watch.

“It’s crucial that he’s able to monitor all my training from my swimming lap times to running pace so being able to see all my training on Movescount.com is vital. “It’s also Caveman proof,” he jokes. “Some of my training takes place is some pretty wild places. Mud, salt water, crashes and bumps are routine.”

However he does it, Stoltz knows he has some serious preparation to do for his appointment with Maui. “The course is all about everything I’m not good at,” he says. “That means I’ve got to work even harder.”