Devouring a roasted pepper tartlet in a swish Richmond deli may not conjure up visions of running on dusty west African trails, but sat before us is Tarek Mouganie (pictured), the shining light of Ghanaian triathlon.

Following Chris Symonds’ outing for Ghana at the 2006 Commonwealth Games, Mouganie is the second athlete to represent the west African nation in triathlon, finishing fourth in the 30–34 age-group category in Cape Town, before racing again at Hyde Park in May.

A second generation Ghanaian (Tarek’s grandparents hail from Lebanon), Mouganie is a man well-travelled, earning a PhD in something called Applied Superconductivity at Cambridge before working in high-powered positions in the City. Mouganie came to tri in 2009 and, despite having never swam or cycled in his life, completed his first tri that summer under the watch of coach Fiona Ford.

An Ironman followed in 2010 before Tarek moved back to Ghana in 2012 to start a company that invests in small businesses. It was here that he met Bawah Fuseini, the then secretary of the Ghana Athletics Association. Together, under the umbrella of the Ghana Athletics Association, the duo formed the Ghana Triathlon Federation in the capital Accra. “The results won’t be overnight, but I truly believe it can be done,” enthuses Mouganie. “It’s a blessing that we’re not inheriting something with issues, but rather starting it from scratch.”

The Ghanaian football team, plenty of whom are millionaires, recently made headlines for demanding $3m in cash from the government for appearance fees at the World Cup, with one player seen kissing his $100,000 wad of cash. Already unsavoury, the story also highlights the skewed priorities of state funding in Ghana. “It’s very hard to get money off the government as they’ve cut all funding for sport apart from football, and our annual budget for this year is $5,000.

“We could buy equipment but who do we give the bikes to? We have no idea who the athletes are! So we’re going to target everyone who has a bike, an ability to swim and see what happens,” continues Tarek. “Some of the athletes will be great, some just curious, and that’ll help us figure out what the talent is out there. And then we’ll see how we can replicate that across other cities in Ghana and incubate talent that way. It could be Cool Runnings or Eric the Eel!” 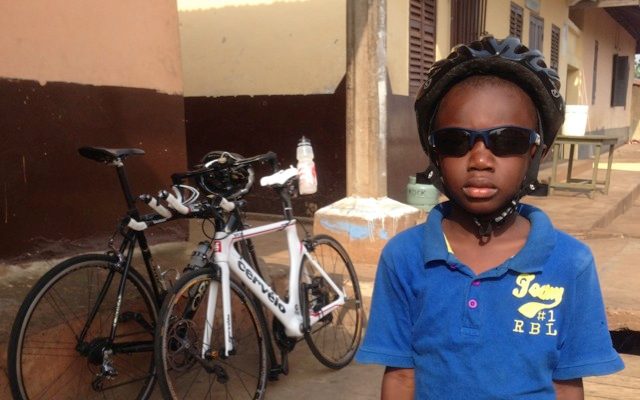 Unlike the East African Olympic giants of Kenya and Ethiopia, Ghana’s Olympic record is negligible, winning four medals in its history and none of those on the track. So what hope does Tarek have when there isn’t a strong swim, bike or running heritage in Ghana?

“There’s very little endurance sport in Ghana, but cycling is improving in popularity and there’s now a Tour of Ghana. The talent is there though. I was doing a 10km run on the track and a 16-year-old boy started running by my side. I did it in 34mins and he was with me every step of the way. After the race he was smiling and wasn’t out of breath. So I asked him, ‘What’s the longest you’ve ever run?’ He said, ‘That was!’ We just need to galvanise these athletes.”

Research by David Epstein in The Sports Gene and by the University of the Copenhagen suggests Kenyan runners (namely the Kalenjin tribe) are genetically suited to endurance running. Additionally, the Jamaican medical researcher, Errol Morrison, has a hypothesis that believes “malaria in Western Africa forced the proliferation of genes that protect against it and that those genes, which reduce an individual’s ability to make energy aerobically, have led to a shift in more fast-twitch muscle fibres”, which isn’t conducive to the largely slow-twitch endurance sport of triathlon. So are genetics against the Ghanaian would-be triathletes before they’ve even begun?

“I think climatically and culturally there are issues in West Africa. First of all, the climate in Ethiopia is easier as parts of it are at 2,000m, which is cooler, and then you have the performance benefits of training at altitude. So when you come down again you feel like a rock star. It’s just too hot and humid to run in Ghana for three hours. We have a marathon here, but it starts about 4am and the coolest it’ll ever be is 28°C. I think it’s the lack of facilities that are holding people back.”

IF YOU BUILD IT…

Ghana boasts the second largest economy in Western Africa (if you ate a Cadbury chocolate bar today, there’s a high chance it came from Ghana), but how does it compare with South Africa in structure? “South Africa is a developed country with paved roads, so it’s hard to follow their model. The infrastructure in Ghana is so poor and it’s very hard to set up a sport like javelin or long jump let alone an expensive sport like triathlon, because it involves equipment,” adds Tarek.

“The facilities aren’t there for mass participation swimming either but, where there are pools in Ghana, they’re used. There’s a village called Keta with an estuary going into the ocean. There are great swimmers from there who are famous around Ghana for swimming. So, to paraphrase Field of Dreams, if you build it, they will come.”

And what does the future hold for Tarek in the Ghanaian tri-suit? “I’m 32, so I doubt I’ll have any elite dreams, but I have the hunger to progress. I have goals and my new coach [British racing great] Spencer Smith has goals for me. It’d be great to have him come to Ghana to lead some coaching sessions.” And with that tantalising image, Tarek is off, an infectious whirlwind seemingly buoyed by the vast challenges that lay ahead.

On Friday we’ll bring you more Going Global with news from Rwanda.