Daniela Ryf has capped off a remarkable season by claiming the richest prize in triathlon, a cool million dollars for winning every race in the Nasser Bin Hamad al Khalifa Triple Crown.

On Saturday afternoon, the Swiss Ironman world champ put in a dominant performance to guarantee the huge prize purse was hers. With the swim cancelled due to high winds, the race included a short run before the 56 mile bike leg instead, and Ryf put in a blistering 2:07:28 for the combined short run and bike. She then finished with a 1:18:48 half-marathon to finish in 3:28:20, almost 10mins faster than runner-up (and fellow Swiss) Caroline Steffen. Asa Lundstrom of Sweden was third in 3:39:35.

Ryf said after the race: “This is an amazing moment in my career and I hope for triathlon,I am very grateful that HH Prince Nasser has helped raise the profile of the sport. It has been an amazing year for me. To be honest I have no clue what I will do with all the money. I really need to let this settle a bit!” 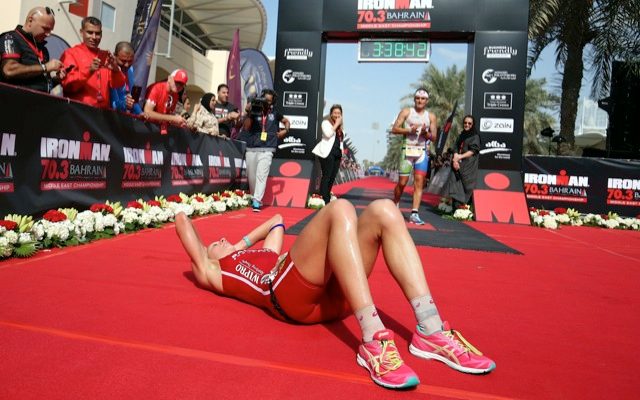 Daniela Ryf, who has won almost everything going on the long-distance circuit this year, attempting to let her victory (and new millionaire status) sink in.

In the men’s race, Belgian Bart Aernouts was victorious after taking the lead halfway through the bike leg. Aernouts’ run split of 1:14:00 was just enough to hold off Ruedi Wild, who put in the fastest half marathon of the day (1:12:01) to finish just over a minute behind Aernouts. In third place was third place was South African James Cunnama, who crossed the line another minute behind Wild in 3:13:54.

Is Daniela Ryf becoming unbeatable in long distance triathlon? Let us know in the comments!