Challenge Wanaka has been on my "must do" list for years. The previous week had seen heavy rain (and snow) in the area so the lake was very high (and very cold; 15.3 degrees).

On the Thursday morning I took the opportunity to have a short swim in the lake to steady the nerves; see just how cold it was and test out my recently purchased neoprene swim hat. All went well but I noted that, with cold hands and feet after only 10mins in the lake, it was going to be a slow transition to the bike leg!

The briefing was held on Friday morning where we were informed that the section of the run course alongside the Clutha River was still flooded and we would be running a modified two-lap course. A pity as this section of the trail is the most scenic part of the run (i.e. even more impossibly scenic than the lakeside section).

The elevation gain/loss was unchanged so although we weren't running up Gunn Hill, the gravel trail that replaced it was just as ‘entertaining’. In the afternoon we recced the bike course. There are virtually no flat sections on the course and, although there are only a few notable hills, the combination of rough chip roads and strong winds meant that it was going to be a tough ride. 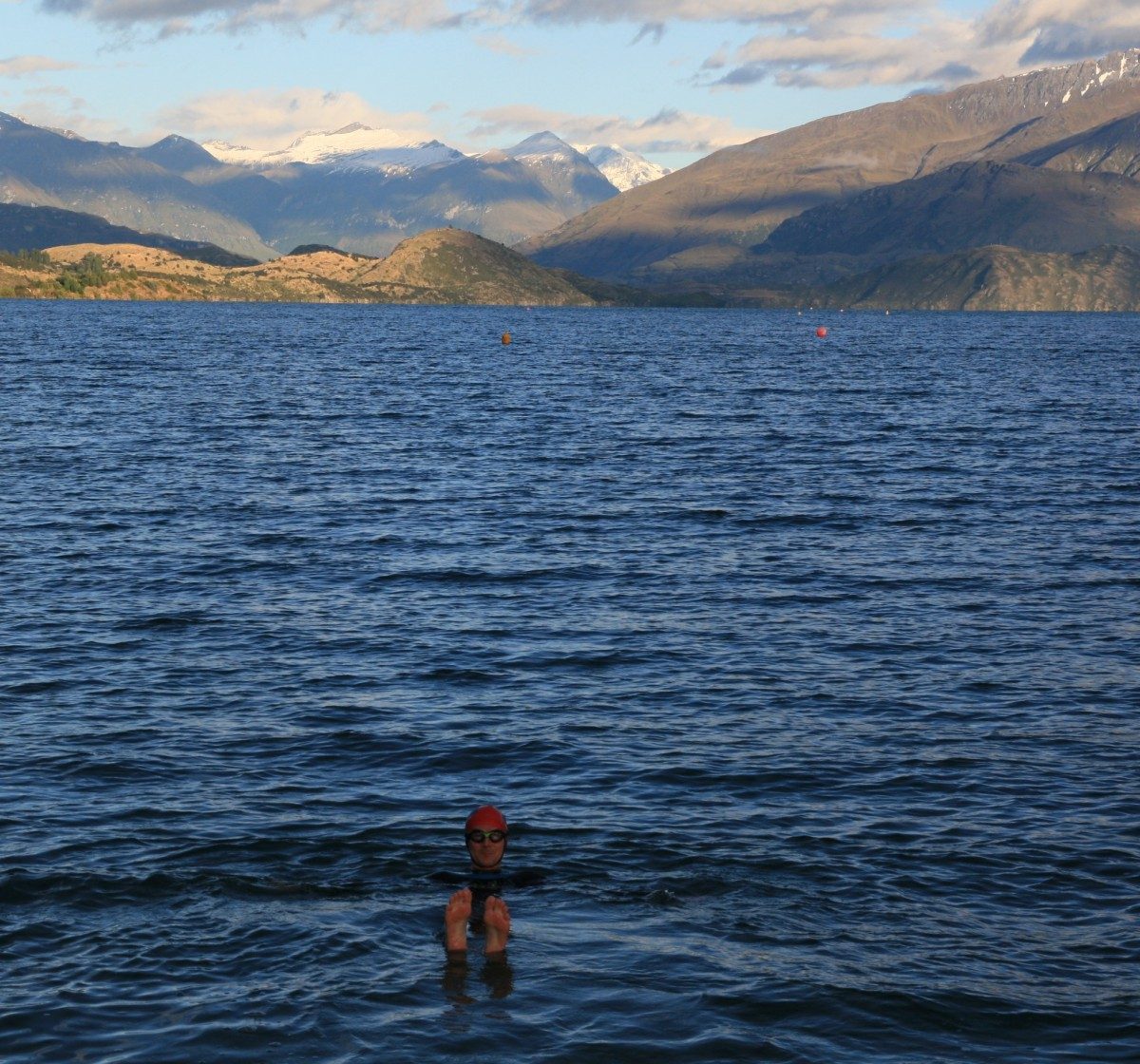 Straight into the chop

I didn't sleep well the night before the race – a storm front passed through in the early hours and above the howling winds and rain I could hear the waves breaking on the lakeside across the road.

I went to transition at 5:30am to join a huddle of nervous athletes peering through the darkness to see just how rough the lake was. Fortunately it was too dark to see. So it was back to the apartment to get into the wetsuit and wake supporter #1.

The Pro field went off at 6:30am (just after sunrise). Gina Crawford, who took her fifth title here later, described the swim as the choppiest that she’d ever seen. The age-group field went off 10mins later heading straight into the chop for the first 700m.

About 500m I found a good set of feet and latched on. Once we made the first turn the conditions eased a little, it was easier to find a rhythm and my "pilot fish" was doing a great job of navigating the course. The water away from the shore was crystal clear and the sight of snowcapped mountains on every breath was quite special.

On the second lap the cold was starting to play a role and I could feel my shoulders tensing up – the feet had long since stopped sending complaints about the cold. I was glad to exit the swim in 1:13hrs and surprised to see that most of the gear bags were still in place for collection (I was fourth in my age group).

It was a slow jog/walk over the bridge to transition where I struggled with cold hands to get my bike kit on; 12mins later I was ready to head out into the oncoming showers on the Glendhu Road.

The road starts climbing straight away and it took a while for the feeling to return to my feet and ankles. The headwind on this section added to the fun but the sight of the rainbows across Glendhu Bay lifted the mood and, by 10km, I was finding my form. About this point the lead Pros came flying back along the road – downhill with a tailwind, which was something to look forward to.

The turn comes at 17km and then it’s a faster bike back to Wanaka. This was fun as I got to see the other age-groupers and those doing the half-distance event battling into the wind and hills. The real hilly section of the bike course is on the run up to Lake Hawea and this was added to by the cross-headwind. The faster half riders started to pass me on this section and it was interesting to see those with deep-dish wheels get blown across the road by the wind gusts.

By lap two I realised that the power wasn't there (perhaps a result of doing Ironman Busselton six weeks before) so I backed off with a view to getting round the bike leg with something left in the tank for the run. The coarse chip roads cause constant vibration, which suck your power and lead to a series of rattles on the bike. Supporter #1 had asked before the event that I stop and check any bad rattles so, at the start of lap 2, I pulled over to see where one particular noise was coming from. My front brake had worked loose and was hanging on by a couple of threads so it was out with the Allen keys to get that re-attached!

I was happy to hit T2 after 6:21hrs; 8th in my age group. Supporter #1 had just finished her run for her team and the advice was that it was getting warm out on the course. I really enjoyed the first lap of the run course and came through 21km in 2:17hrs feeling quite fresh. It didn't last, of course, and by 34km I was starting to take short walks on the hills. This is where the scenery really helps. I ran/walked the rest of the course and came home with a 4:53hrs marathon and a 12:50hr overall time for 12th in my age group.

Challenge Wanaka is a brilliant event with superb volunteers and unbeatable scenery. It’s never going to be the fastest course (Dylan McNeice won in 8:51hrs) but I’d recommend it to anyone looking for a memorable race (plus win your age group and get free entry to Challenge Roth). Macca came third on the day and has promised to come back next year for the win! So put it on your list – you won't regret doing it.

Paul Harrison is a member of Perth’s Stadium Tri Club, who are always happy to host visiting athletes (Scott Neyedli is currently training with them).