With its history stretching back almost as far as triathlon itself, Ironman Hawaii has become an institution among athletes. Now in its third decade, we count down 30 highlights from the race to end all races ahead of tomorrow’s showdown… 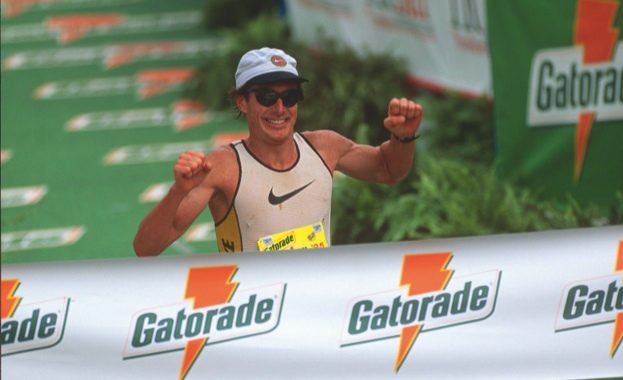 Nicknamed ‘The Grip’, Allen won five consecutive victories from 1989 to 1993. He didn’t start in 1994, which had Greg Welch thanking his lucky stars, but in 1995 the returning Allen wouldn’t be denied, equalling Dave Scott’s record of six titles. That was enough for Allen, who never raced at the Big Island again. 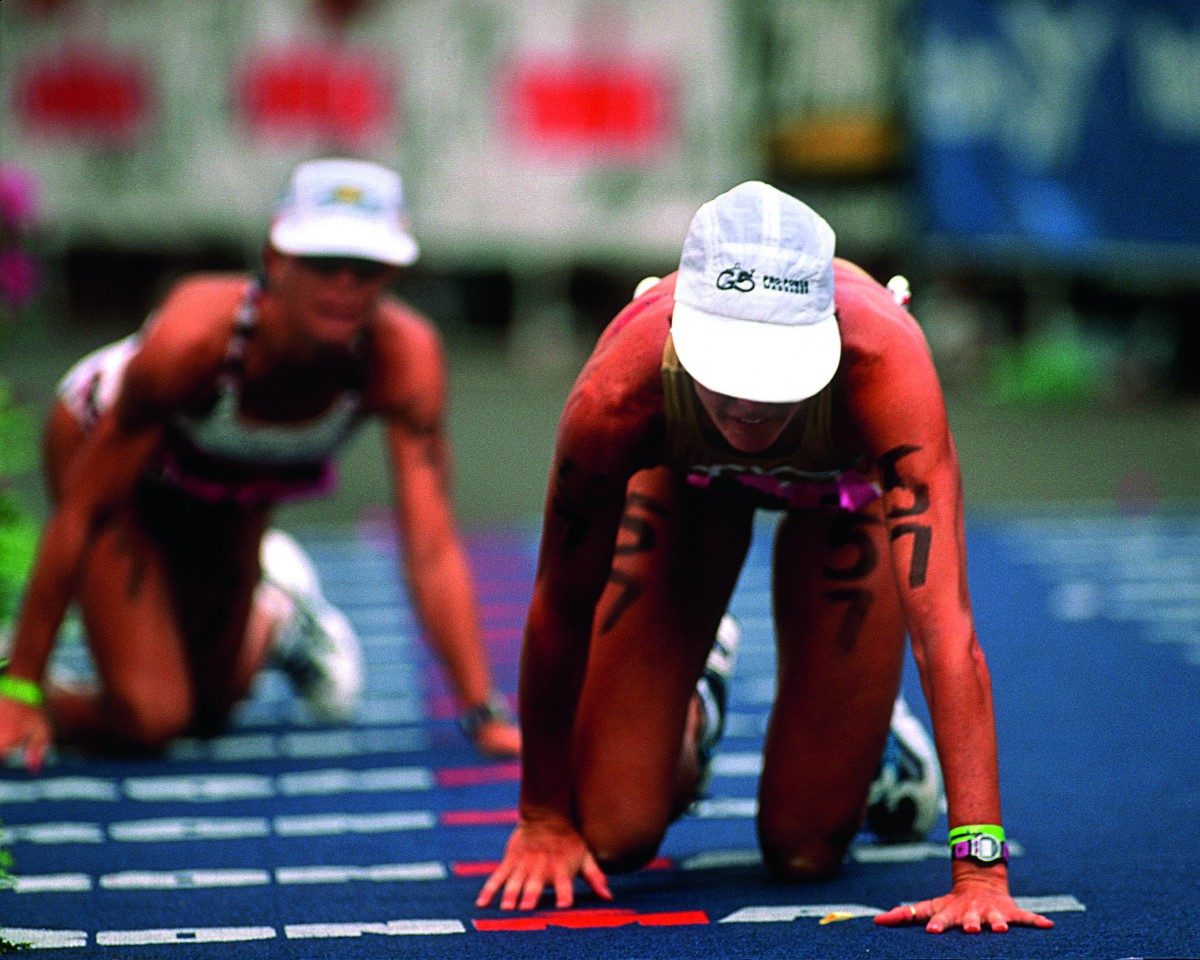 In the 1997 Ironman, Sian Welch, wife of Greg, started to stumble going down Ali’i Drive with only minutes to the finish. Around the final bend she turned to see Wendy Ingraham close behind. Ingraham was in a similar depleted physical state. As they hit the finish-chute carpet in their race for fourth, they both fell. Trying to stand and run to the line only feet away, they both collapsed again. Eventually, Ingraham discovered that crawling to the line on all fours was the best option. Welch followed, but couldn’t catch up. The ‘crawl’, as it has become known, is one of the most talked-about finish line dramas in the event’s history, and led the American commentator to remark: “Their bodies were obliterated but their spirit stayed firm.” 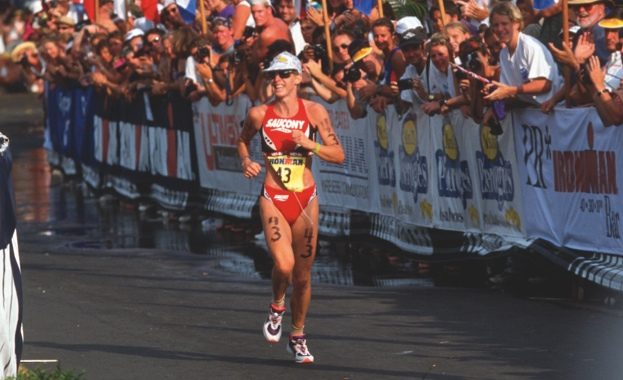 Nicknamed ‘The Queen of Kona’, Paula Newby-Fraser became the most successful athlete in Hawaii with her record eighth Ironman victory. The Zimbabwean started with a win in 1986 and won her last in 1996. During this time she would only be beaten by Karen Smyers and Erin Baker. For this achievement, the United States Sports Academy named her in the top five female professional athletes of the last 25 years. 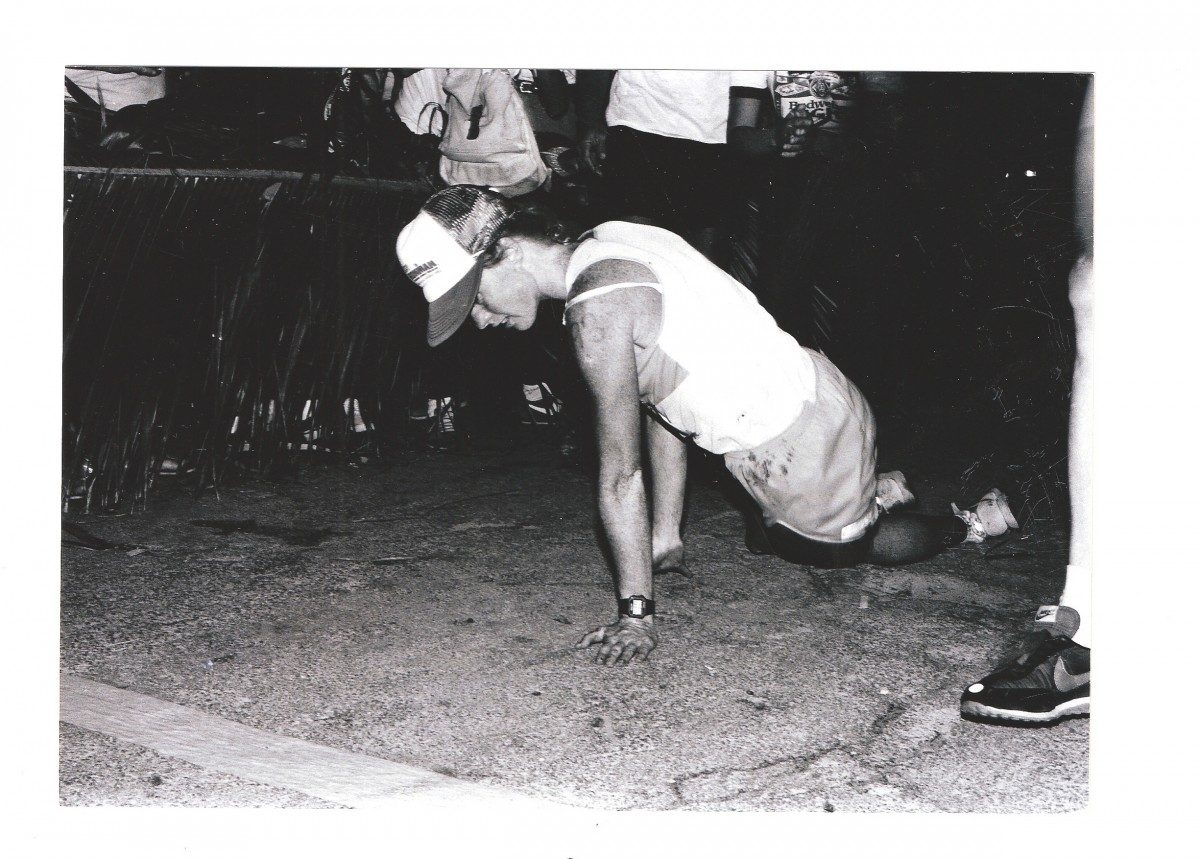 2. Julie Moss crawls to the line

Mark Allen could do nothing but watch on the television as his future wife crawled to the line in an heroic achievement that set the level of drama for the Ironman to follow in years to come. Allen was so inspired by Moss’ display that he decided to venture to the island to start his own Ironman quest. Moss’ 1982 wobbly stumble through Kailua-Kona to the finish line was a boon for the sport, strangely attracting people instead of repelling them.

Moss’ reason for competing in the race was to gather data for her exercise physiology thesis as a US college student. As the 23-year-old drew closer to the finish, while leading the race fatigue began to overwhelm her exhausted body. She continually dropped to the ground but recovered enough to press on, pushing away the hands of helpers in the process. With only feet to go, Kathleen McCartney shot past Moss and claimed the title. All Moss could do was crawl.

Though she didn’t end victorious, Moss’ courage fuelled the Ironman’s ascent to the lofty place that it now holds in modern sport. And just think, without her ‘crawl’, there may never have been an Iron War… 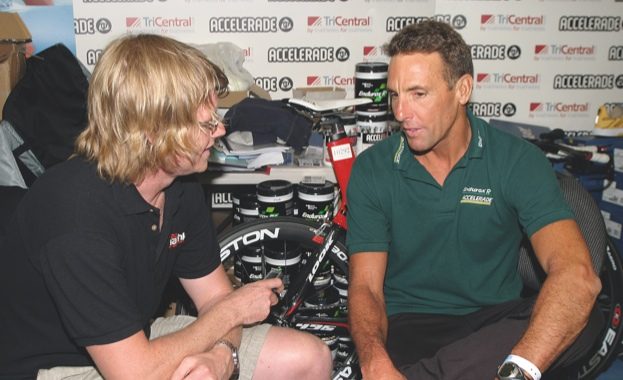 Mark Allen and Dave Scott first introduced themselves on the bike course 35 miles into the 1982 Ironman. Dave Scott won the race. Year after year, Allen came back to the lava fields to try and trump Scott. In 1989, the two Hawaiian Ironman immortals swam and rode together the entire day. Then they ran shoulder to shoulder on the marathon course. At 21 miles, Scott started to succumb to Allen’s metronomic pace. At 23 miles, he was being tailed off as Allen made his move for home.

With an American flag in hand, Allen crossed the line for his first Hawaii win in the astounding time of 8:09:15. Scott, who in coming second posted his Hawaii PB of 8:10:13, had already won the race six times. Allen, with his first victory in hand, would go on to match his record. Scott described it as: “The perfect day for competition.”

We caught up with Dave to talk about that ‘day’ in 1989… “Would you believe, Mark and I didn’t talk about that race until 1996… When we started the run, I couldn’t get my legs going. Mark later commented that my pace was constantly going up and down, but I felt more like a metronome. It must have just been the undulations in the course.

“My plan was to break him at the top of Palani Hill; Mark had other ideas and stretched it out at the bottom. In my head I said I’m going to do that to you when I get to the top… but I didn’t. I couldn’t.

“After the race I was very hard on myself; when I crossed that line it felt like a sword had pierced my heart. But soon after, I realised I couldn’t have gone any harder. And credit to Mark, it was his tactics that beat me.

“You see, from early in the run, we’d run side by side, but at the feed stations Mark would be aggressive in getting to the front. At the time I just thought, ‘Well, I’ll drop back’. So for the next 22 aid stations I’d had to drop back 15 metres to make sure that I got my aid (the volunteers would be looking at the lead guy so you had to hold back a touch or potentially miss your drink). It meant I had to surge back every time, which left the tank emptier than it should have been. “Fair play, it wasn’t malicious – just an athletic move, a competitive move.”