In terms of seconds gained for pounds spent, a time trial aero helmet is potentially one of the best biking upgrades. However, before you head out and buy the most expensive and outlandishly profiled helmet available, think about the following points….

The helmet has to suit your riding position. There’s no point having a long-tailed helmet if you roll or drop your head a lot. The tail has to sit flat along your back or it can easily create rather than minimise drag.

Aero cycling helmets: how to choose the right shape

A quick guide to aero helmets

Do I need an aero helmet for triathlon?

Also consider comfort; aero helmets often won’t deliver nearly as much ventilation as a conventional road helmet. That’s not an issue for spring UK races, but a major consideration at, say, Kona. Finally, don’t forget transition. A helmet has to be easy to get on and off and tweak on the move. 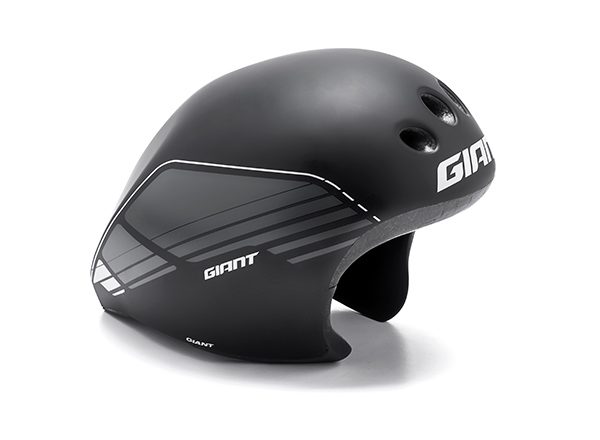 The massive Taiwanese bike brand, Giant, makes some bold claims when it comes to the 424g Rivet TT, including ‘unbeatable performance for TT or triathlon’. The Rivet’s aero profile – complete with its stubby tail in contrast to the others on test – has been engineered and finessed through Computational Fluid Dynamics, the result being a helmet that’s said to be effective in real-world conditions. Compared to the longer tailed offerings on the facing page, it definitely favours riders with a tendency to move their head, but loses aero points when in the optimum aero position.

The soft and flexible ear covers, along with the Cinch Pro fit retention system, aid a swift T1 while offering a comfortable fit. The rear dial is smaller than other similar retention systems, but still allows easy adjustment on the fly. Impressive ventilation is provided by four ports at the fore and channels that run through the helmet, which encourage airflow over the head and out through the larger exit port at the rear.

Verdict:Good comfort and ventilation, but not the most aero 78% 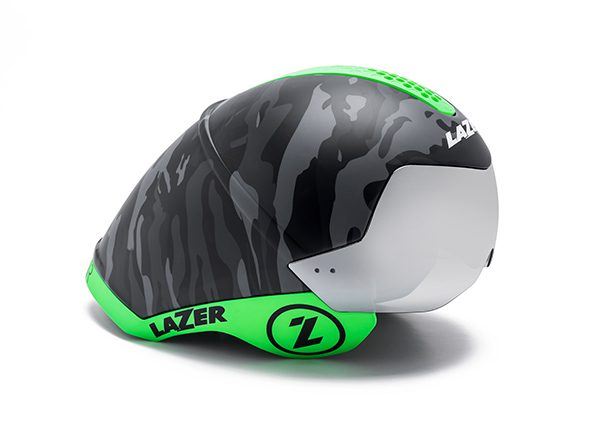 The Lazer Wasp Air Tri is packed full of tech and the camouflage paint job looks sharp. It comes with a wide integrated visor and, generally, a visor is seen as more aerodynamic, yet from a triathlon perspective wet post-swim hair means an inherent risk of the lens fogging up. The Lazer Wasp has a solution that does the trick, however – to encourage airflow and ventilation, the visor can be shifted forward slightly and there’s a honeycomb patterned vent at the fore. Compared to the original long-tailed Lazer Wasp that was popular on the time-trial circuit, the Air Tri has a cut-off tail and is light years easier to get on at speed (but it still requires a little bit of practice). The retention system works well and there’s ample padding. Weight is
a moderate 422g. lazer.co.uk

Verdict:Impressive lid, clever features, although there may be more aero options 88% 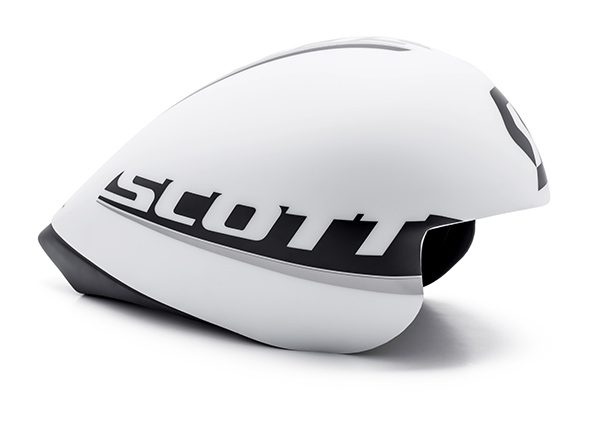 If you can hold the position, a longer tailed helmet will be quicker. But, if you can’t, any benefits are negated by the tail acting like a sail. Developed in collaboration with World Tour professional cycling team Mitchelton-Scott, the Scott Split definitely falls into the category of long-tailed time-trial helmets. Despite the lack of any visible vents at the front, the Split was fairly cool, with deep channels running over your head to a large port at the rear. The Split helmet (440g) is the hardest on test to get on and off in transition, the ear covers are stiff and turning the rear dial when riding is more difficult – although once on it’s comfortable. The standard test lid comes without a visor but you can buy one separately.