Founded in 1995 by Markus Storck, the company that bears his name has consistently pushed the boundaries of what’s possible with modern materials in bike design and manufacture.

He grew up around bikes, helping his parents in their successful bike shop. He then went on to import major US bike brands to Germany before founding Storck Bikes.

From road bikes to mountain bikes and even electric bikes, lighter, faster and more efficient are Storck’s watchwords. The Aero2 has been his pet project to produce the ultimate triathlon bike that combines aero performance, weight, comfort and optimal power efficiency.

As you’d expect from German engineering, it has spent a serious amount of time in the wind tunnel, and recent reviews have found it to be up to 1,300g lighter than rival bikes on the market. Weight might not be as much of a concern as aerodynamics on a TT bike, but if you can have both, why not?

The Aero2 IS has already delivered on the road, too. Rocker of the skimpiest Speedos in triathlon, Faris Al Sultan, is supported by Storck, and this season piloted his Aero2 to his win at Ironman Lanzarote. Storck point to his data from his ride at Kona last year, which cemented his fifth-place finish and claim it showed the highest level of ride efficiency. In simple terms, he rode fast with the lowest energy expenditure.

In the UK, Storck has a new distributor – Storck Raddar UK. Founded by Ian Hughes, who was responsible for the distribution of Scott Sports for 15 years, he started with their electric bikes three years ago and has now been given the go-ahead for their entire range. He’s adopting a fastidious approach to selecting the small number of approved dealers, ensuring all have trained mechanics and a bike-fitting service that’ll put riders in the most aerodynamic and efficient position possible.

If you do decide to take the plunge and go for an Aero2 IS bike or frame, you’ll benefit from an hour of free wind-tunnel time and analysis at Southampton University. Booked via Prestige Cycles in Hove, once your bike is mounted on the plinth in the tunnel, the drag of a number of positions is assessed by technicians before further fine-tuning to optimise it. A process that’s worth £500, which should help in a small way to ease the pain you’ll no doubt be feeling in your wallet.

We’re definitely excited to get our hands on the Aero2 and put it through its paces, but, as with all über-bikes, it’s important to not be seduced by them: keep a level head and that £12k price tag in mind. Although a £12k bike can’t be twice as fast as a £6k bike, or even a £600 one for that matter, it can – and should – be sublime and perfect to ride. With these lofty expectations in mind, it’s time to see what it can do.

The Aero2 is a wonderful-looking bike. If we’re being picky (as you’d be entitled to when spending this much cash), we’d prefer a little less branding than on our test bike; we reckon a logo-free stealth matt black would look the business.

The profiling of the tubing betrays its time spent in the wind tunnel, but it somehow manages to avoid the excessively elaborate curves and bulges that plague the aesthetics of many top-end TT bikes. The seat tube hugs the rear wheel and there are horizontal dropouts for fine-tuning, while the aerodynamically matched head tube, stem and bars give a super-slippery looking front profile. 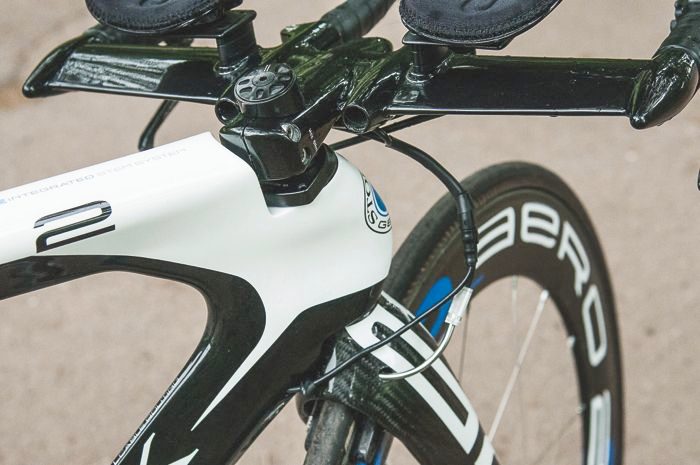 The key bottom bracket and head tube areas look sufficiently beefed up for high stiffness and power transfer, but whether Storck have managed to marry this to a plush ride will have to wait until the riding for an answer.

The carbon brakes that are integrated into the forks and seat stays are an invisible work of art. The carbon leaf adjustment mechanism is simply genius, and changing pads and tweaking them isn’t the nightmare job of many other integrated brake systems. The frame is Di2-specific and full Shimano Dura-Ace unsurprisingly makes up the groupset.

Although our test bike is specced out with the older 10-speed edition, if you were to splash out on a 2013 Aero2 IS you’d get the new all-singing, all-dancing, 11-speed Dura-Ace 9070. Di2 does offer a genuine performance edge on TT bikes, with the satellite bullhorn shifters an absolute godsend on technical or hilly courses.

All the cabling is neatly routed, and although the battery pack isn’t integrated into the frame, it’s neatly hidden out of the wind on the trailing edge of the seatpost. The sleek-looking Zeitjäeger carbon cockpit blends almost seamlessly into the frame, especially if you ditch the bottom spacer, and for an integrated set-up it offers a decent amount of adjustability.

The wheels are race-proven Storck-branded Zipp 808 tubulars and, with quality Schwalbe Ultremo 22mm tubs, should be extremely light, aero and fast rolling. The carbon aero seat post allows an impressive amount of adjustment, with seat tube angles ranging from 73-80°. Sitting on top of it and finishing off the build, the Prologo Nago Evo T2.0 saddle is another no-compromise choice.

Put the bike on the scales and you do a double take. 7.09kg for a 55cm frame would be impressive for a road bike, but, for a TT bike, it’s staggering. Aero, tick. Lightweight, tick. Comfort and speed on the road? We’ll see…

With a bike worth this much money, you take your time setting it up, and, with plenty of range in the seat post and a decent amount of adjustment from the Zeitjäeger cockpit, most riders should be able to find a solid position. To get the right saddle height though, our 190cm tester did end up with a very aggressive position, with a saddle-to-bars drop-height significantly more than he’s used to. It was great for 10- and 25-mile TTs and sustainable for him on a 90km ride, but a full long-course race and being able to run a strong marathon off it might be a push. 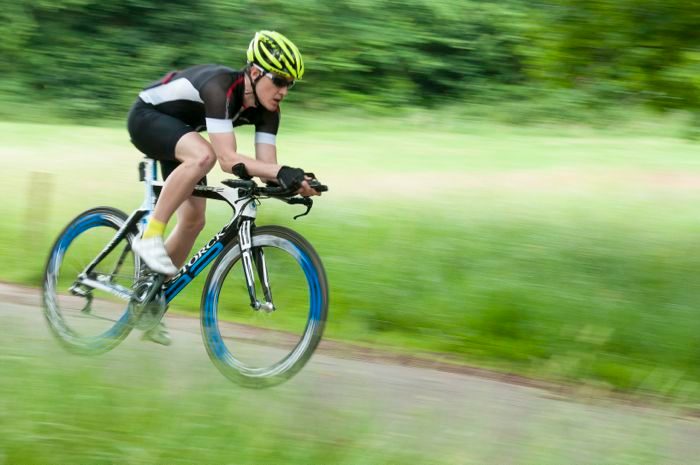 Storck’s recommended height for the 55cm frame is 185cm plus, and we reckon for most age-groupers this is about right. Taller long-course racers might have to look elsewhere. Instantly the Storck feels very different to most other tri bikes. Even at low speeds, there’s a sense of urgency, lightness and nimbleness that you’d normally associate with a road bike.

Steering is light to the touch, responsive and you soon find yourself attacking bends and corners as if you were racing a crit. Once you hit some straighter roads, it accelerates staggeringly well up to cruising speed and then, once nestled down on the extensions, you feel as though you’re flying.

It slices through the air with frame, wheels and rider working in perfect harmony. Even in such an aggressive position, it’s amazingly comfortable. Road buzz through either end is virtually non-existent and you’re buoyed by the feeling that every watt is being efficiently converted into kph.

Powering over rises in aero tuck is like being rocket-propelled, and there’s no weighty drag that you sometimes get with heavier tri bikes. If you need to rise up onto the bullhorns for a steeper ramp, your out-of-the-saddle effort is rewarded by a satisfyingly gradient-defying surge. The Di2 satellite bullhorn shifters give a new dimension to riding a tri bike, and, on twisting or suddenly rising roads, definitely give you an edge. Hit some real hills and the Storck’s lightweight build suddenly comes to the fore.

You can dance on the pedals, you can spin a low gear, but the uphill experience is always pleasurable. Again, the satellite shifters shine, but it’s the bike’s weight, stiffness and responsiveness that really deliver. Heading downhill, it’s like being on a top-end road bike, and if you’ve got the handling skills you can really push it.

The all-carbon brakes might be light but they’re mighty powerful, and scrubbing speed can be left seriously late. You know how well it’s going to launch you out of the corner – with a grin-inducing electronic whir as you straighten up and sprint, you’re instantly back up to speed and eyeing up the next bend. 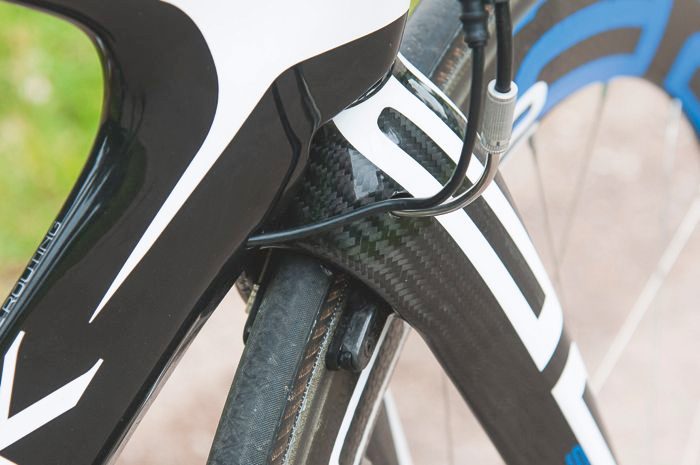 All top end with no compromises.

If you’re even considering value for money, this isn’t the bike for you.

Wonderfully plush and, if you’re under 6ft, suitable for long-course too.