The eagle-eyed among you may actually recognise this frame, but not with this name on it. The Dura Integra Pro from Sensa, now available in the UK through Merlin Cycles, is what’s known in the industry as an ‘open mould’ frame. That means that instead of Sensa developing it themselves, they buy in the frames from an Asian manufacturer. The factory owns the moulds and licenses the design to bike brands, which means in actual fact several brands use this same frame mould. None of that will automatically makes it a sub-par bike, though, and we were intrigued to find out if the Dura Integra Pro offers real performance for a bargain price, or if it’s a pig with lipstick.

Aero triathlon bikes are horrendously expensive to develop. An exclusive mould costs around $10k (US) per frame size because they are CNC machined from a huge block of aluminium billet, but that expense pales in comparison to the outlay that’s required for a complete R&D project – you need to assemble a team of boffins with PHDs, book weeks of wind tunnel time for testing and have computing power on par with NASA.

So, for smaller brands, an open mould frame makes a lot of sense, particularly as there’s always a strong demand for more affordable aero bikes. But these frames can vary greatly between factories, so brands must test frames thoroughly themselves and select a good one. This frame certainly looks contemporary. It has a hinge-type fork, flat top tube, dropped seatstays with broad shoulders, horizontal dropouts and hidden brakes. Modern UCI-legal tri/TT bikes have become rather homogenous in recent years as designers reach a consensus on the fastest shape within a set of well-established rules. The Integra echoes those designs.

The Dura Integra Pro weighs 8.7kg, exactly as claimed, and is built with a mechanical Shimano Ultegra groupset with racy 53/39, 11-25 gearing. The front brake is a TRP TTV tucked behind the fork and the rear is a dual-mount Tektro caliper behind the bottom bracket (which means it’s not compatible with Stages, 4iiii and Infocrank power meters), operated by chunky Tektro levers. The San Marco Era saddle is more tri-focused than it looks, with a deeply-padded nose. The DT Swiss R32 wheels have a slight aero profile that are advantageous over basic shallow wheels, and they come with excellent Schwalbe One 23mm tyres.

There’s no tri-specific storage but with aero bottles on the frame, plus another between the extensions and a bento box on the top tube, you can be well supplied for minimal drag. The hinged stem looks odd, but in combination with the spacer kit it offers extra adjustment and that’s something we always like. The seatpost has a huge range of fore and aft as well, so you can get forward and save your glutes.

The Dura Integra Pro makes a good first impression on the road. The shifting is snappy between the closely stacked sprockets and the power transfer is impressive. What’s more, it steers really well, with satisfyingly precise responses to your inputs thanks to a stiff fork. It’s stable at speed and you soon trust it enough to stay on the extensions when riding over roundabouts. Open mould or not, this frame is the product of people who really understand bigger problem: the DT Swiss R32s add more to the price than basic training wheels yet they’re heavy, slow and certainly not worthy of racing.

But the brakes are the biggest annoyance. The TRP TTV front doesn’t stay centred and rubs a lot, and if you fit wide aero rims its arms are no longer flush with the fork. Either way, there’s a lot of brake cable in the wind. We’d prefer a regular caliper any day. The rear isn’t much better, prohibiting some power meters and losing most of its leverage (i.e. power) once opened wide for an aero wheel. These are brakes that look good in a showroom but are a pain to live with.

The brake issues aren’t necessarily deal breakers if the Sensa is fast, but unfortunately it isn’t. We tested it over 10 miles around Castle Combe race circuit, using the same clothing and Enve 7.8 wheels, and the same 320W, as the previous week on an Orbea Ordu Ltd M20i in the same conditions. The Sensa’s 22:34mins was 46secs slower, a big margin. Extrapolate that out and it’s 8:26mins for a 180km Ironman bike leg. The power of a big brand is never more measurable than with aerodynamic insight.

For £340 less than this bike you could buy a Specialized Shiv Elite, a super-fast and sharp-handling bike that was painstakingly developed by one of the world’s biggest brands with input from top athletes, and was victorious under Craig Alexander at the Ironman World Championships in 2011. While this Shiv ‘only’ has Shimano 105, we promise you’ll never truly feel the difference from Shimano’s Ultegra, but you will feel the benefit of a Specialized BG Sitero saddle. And you’ll have £340 to put towards race wheels.

Verdict: The handling is good and it’s a smooth ride, but the Dura Integra isn’t quite as fast as it looks 72% 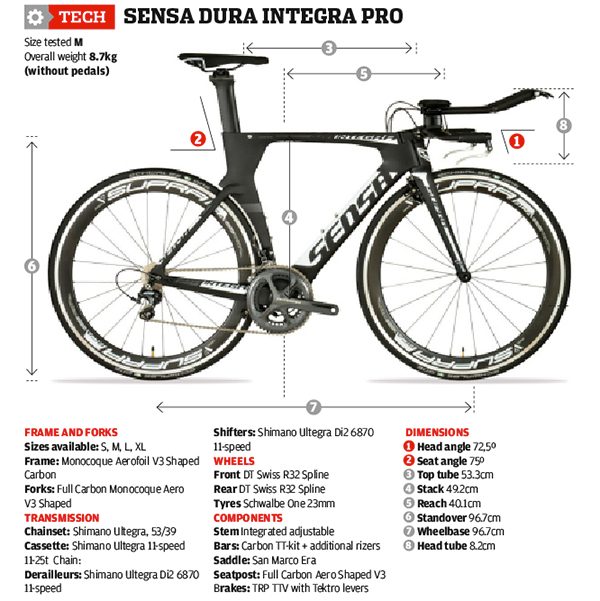