The Bayamo first appeared on the Neil Pryde drawing boards in 2009. It took another two years of tweaking, with help from BMW Group Designworks USA and engineer Kevin Quan (formerly of Cervélo), before a design was settled upon – a design that won a trio of awards when it was officially unveiled in 2012.

But while it’s suitable for triathlon, the Bayamo is a time-trial bike for pro road teams, meaning it has to conform to the UCI’s guidelines. This, you might think, would hamstring it against the ‘pure’ tri bikes that can disregard the UCI rulebook entirely, bikes like the Specialized Shiv. The Neil Pryde engineers don’t think that’s necessarily the case though, and part of this test is to find out if they’re right.

“We see some manufacturers are designing non-UCI[-legal] frames that have very deep sections,” says Mike Pryde of Neil Pryde Bikes. “But we strongly believe that this compromises the bike’s wider yaw angle performance and weight, which affects the overall handling characteristics of a good TT/triathlon frame.” 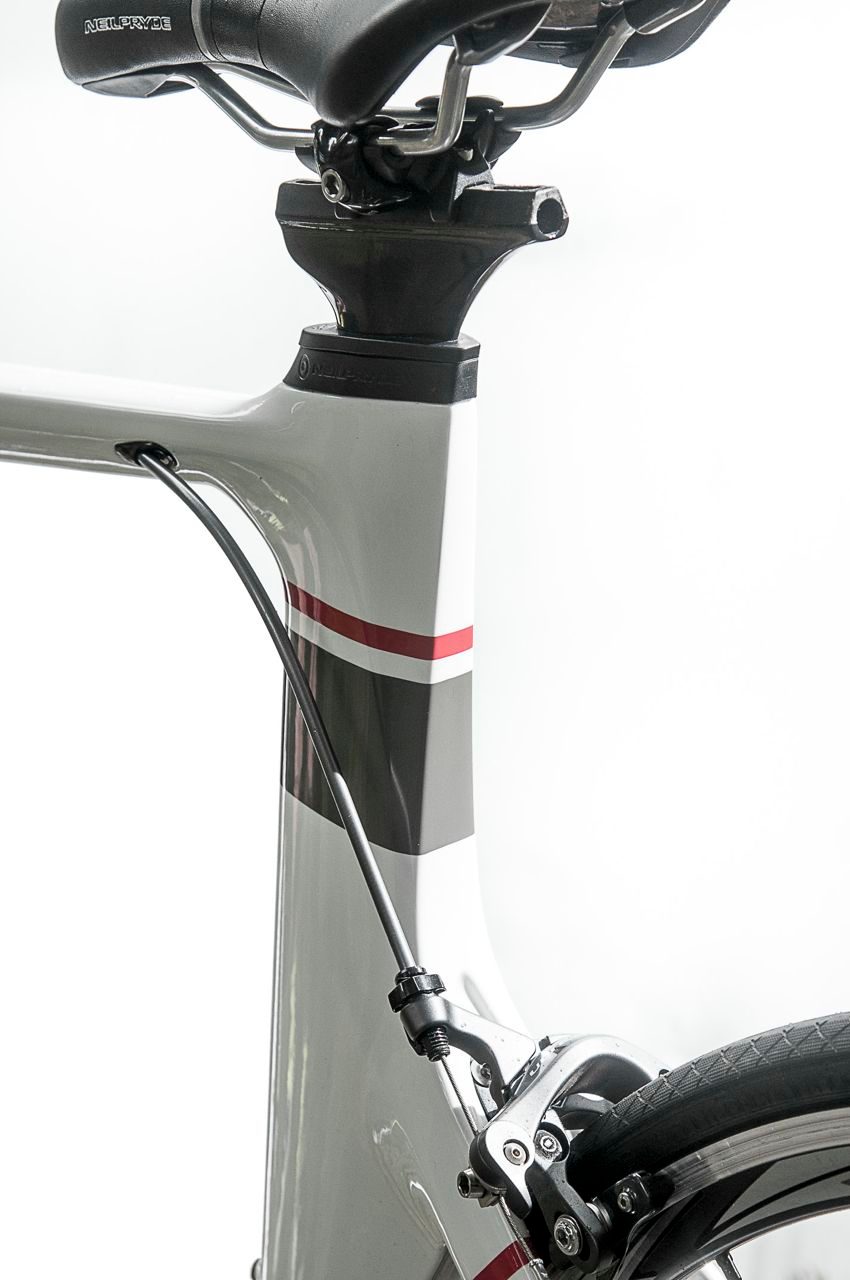 It’s for this reason that the Bayamo frame uses tubes with a Kamm-tail profile. The proportions and profile of the Kamm tail change depending on which of the frame’s tubes it’s used to form but, generally speaking, Kamm-tail tubes are wider and have a truncated trailing edge.

The ‘blunted’ trailing edge is the clever part as it tricks the airflow into behaving as if there’s a longer tail to smooth its passage over the back of the tube. Kamm profiles are used on the Bayamo’s fork, down tube, seat tube and seatstays and allow those tubes to act like larger aerofoils without the reduced rigidity or added weight. It also allows the Bayamo to comply with the UCI’s specifications.

The other unusual aspect of the frame is a third bottlecage mount near the bottom of the down tube. “That was a personal touch,” explains Mike. “I ride a XS-size frame, which often means it’s impossible to carry two large bottles. [The third lower mount creates the extra room necessary for that.] Also, having a low centre of gravity improves the overall handling of the bike at speed. The third [mount] allows riders to locate their bottles as low as possible to improve stability.” 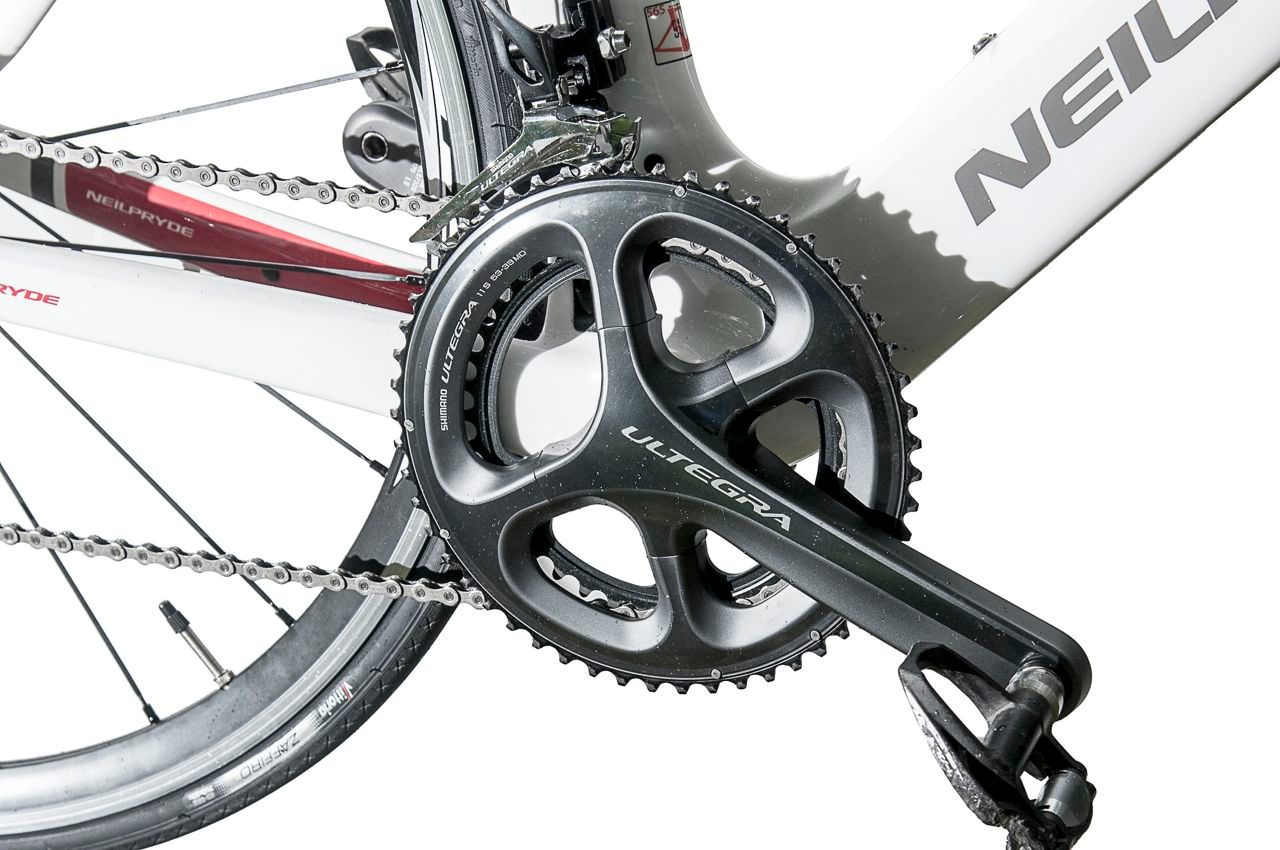 The Bayamo’s full-carbon frame is graced with a full Shimano Ultegra drivetrain and a Profile Design aluminium cockpit.

The Bayamo is named after the squally wind that blows along the south coast of Cuba, but the bike is not unsettled by gusts. In fact, in terms of ride feel, it’s probably one of the most user-friendly tri bikes 220’s tested. It’s so stable and easy to control that you feel at home riding it right away, rather than having to gradually adapt to its quirks over the course of a few outings. Similarly, steering is so assured that course alterations and changes of direction come naturally when you’re on the aerobars.

Crosswinds have little or no effect and while the buffeting from passing lorries may tempt you out of your tuck on other bikes, it doesn’t on the Bayamo. The Kamm-tailed tubes could contribute to this stability as their shape is said to reduce drag across a wider range of wind angles. A traditional teardrop profile may be more effective in a headwind, but these stubby tubes appear to keep it running straighter and smoother when the breeze is blowing from the side.

The Bayamo isn’t rocketship fast, though – at least not with the Shimano RS31 wheels supplied. It holds speed well, but it takes a while to build it up. A more aero wheelset would certainly perk up its acceleration. It’s lovely to ride when it’s up to speed though, and carving through sweeping bends and around potholes is a breeze.

Great groupset and cockpit, but would benefit from better wheels.

Three grand gets you a great bike, but you’ll probably want to raid the piggy bank again for a wheel upgrade.

Easy to find the right position and a well-padded, conventional saddle keeps you comfortable.