This is without a doubt the most eagerly anticipated tri bike of 2016 and not simply because it’s the bike of the reigning Ironman world champ, Jan Frodeno. Canyon has given the Speedmax a radical overhaul with a far greater focus on triathlon. The new approach shows in the geometry and the components, but most obviously in the new integrated storage solutions. Combine all of that with the German brand’s famed value for money and it’s no wonder there’s so much excitement around this bike.

German Jan Frodeno’s historic Ironman world titles in 2015 and 2016 in Hawaii sent the hype around the Speedmax into overdrive. His 4:27:27 bike split in 2015 – the seventh fastest – looks respectable but is hardly flattering to the bike until you look a little deeper. In 2014 Frodeno posted the top swim and run times in Hawaii but lost 16mins to the bike specialist and eventual winner, Sebastian Kienle, (including a puncture and a penalty). He wasn’t bang on the pace. In 2015 it was a different story and, riding the new Speedmax, he was able to keep Kienle in check with a bike split less than 2mins behind his countryman and a full 10mins faster than he managed in 2014.

And at Challenge Roth 2016 it helped him break the iron-distance world record, entering T2 with a12:30mins lead on the chasers  and his 4:08:07 bike split was a new course record, smashing American Andrew Starykowicz’s 2015 record by over a minute (and 3mins faster than Raelert’s 2011 time).

So it served the world’s best long-distance triathlete very well. What can it do for the rest of us? We personally spent a lot of time with the previous model and raced it many times, so we know it well and rate it highly. But we also had some niggles with it: the shallow seat tube, long top tube, awkward brakes, lack of integrated storage…. Yet Canyon have recognised these issues and have responded comprehensively, seeking out technical partnerships with Profile, TRP and Ergon to add their expertise to the new drinking system, brakes and grips respectively.

The new bike remains UCI legal for road pro teams because this allowed Canyon to focus all R&D effort into one bike. “We didn’t have to compromise. We think we’ve produced the best bike for TT and tri,” says senior product engineer Michael Adomeit. It’s faster, too, he explains: “The frameset saves around four watts at 45km/h, but the better integration of storage and hydration of course helps to save further watts. If you were riding a round bottle at the seat tube and switch to the integrated stem-mount bottle, then you’ll gain around 7W more.”

The biggest change to the frame is the dramatically steeper seat tube angle. The old bike pushed riders with longer legs too far back behind the BB. Product engineer Wolfgang Kohl explains the change: “During development two things changed: the new TT rules of the UCI allow smaller riders to sit more to the front, and stub-nosed saddles have become the norm. Both things made us think that a new angle for the seat tube is necessary.”

There are four complete bikes, from £4,399 to £7,299. All run Shimano electronic drivetrains. We’re testing the 9.0, third in line, which costs £5,199 and comes with Ultegra Di2 and Reynolds Strike 62mm carbon clincher wheels – evidence that Canyon’s direct sales model continues to provide incredible value for money. Crucially, they promise that they’ve now resolved the issues that caused delays to both deliveries and enquiries through last year. There’s still no dealer network to help with warranty issues and servicing, but that’s a choice you have to weigh up yourself. 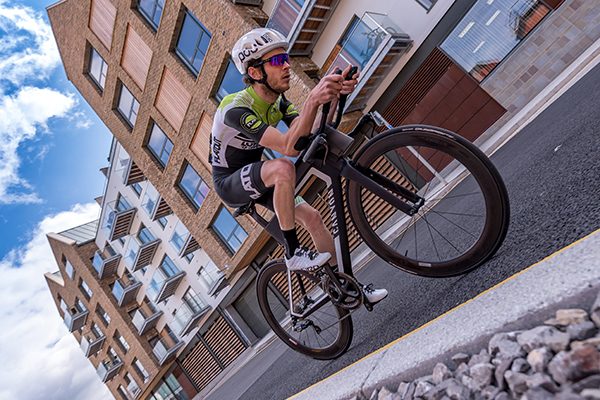 The Speedmax makes a big first impression: it’s fast! Our test bike came with an agressive set-up, so the position was aero and riding to a firm power output we were soon flying along. 25mph came easily. 30mph soon followed. Out of the saddle up a short climb, the frame felt stiff and eager under excited legs, the bar a rigid anchor point to push and pull. The new TRP brakes are strong and spring back from the rims far more positively than those of the old bike.

The wheelset is a huge asset. Reynolds Strikes are brilliant – fast, stable, stiff, raceable.They’re great value aftermarket and equally so in this bike at £5,200. Wrapped in ultra-quick Continental Podium TT clincher tyres, in 23mm at the front and 25mm at the rear for extra comfort, this is a brilliant set-up. We suggest saving the tyres for race days. They’re too good to wear out in training and not the most puncture resistant. They’re grippy, though, and all the better to enjoy the crisp, confident handling born of excellent stiffness in the fork, head tube and bar coupled with well-resolved geometry. Railing around roundabouts in a full tuck isn’t just possible, it’s fun and you save seconds with every one. Think about what that means on most UK tri courses.

The Rake Shift fork adds an extra dimension to the handling. By swapping the inserts in the fork dropouts you can alter the rake between ‘Agile’ and ‘Stable’ settings, each of which live up to their monikers. It’s more a matter of taste, so try both; I prefer the stable setting as it’s noticeably less nervous on fast descents and saves energy at long events while retaining a classy neutrality that allows you to attack corners with gusto. “The Rake Shift is one of our most important features,” says Kohl. “We give our pro athletes a suggestion of what position they could ride depending on the type of course.”

The stiff bar could’ve ended up harsh but the neatly integrated grips ensure it isn’t. No matter how disciplined you are at staying in an aero tuck, there’ll always be lots of times in both racing and training when you need to be on the base bar and the new grips are a big improvement. The Di2 base bar shifters are brilliant for these occasions, too, and Ultegra Di2 functions every bit as well as the Dura-Ace version with just a little extra weight.

The Bento box’s slit top gives easy access on the move while keeping your bars secure. If you’ve never used one before, the drinking straw takes a bit of practice while breathing hard though it’s easy to reach and lock away flat again in its clip. A CamelBak style bite valve would be a good addition – the open straw tends to splash a bit of drink over the frame and your legs every time you clip it back down, making a sticky mess. The 600ml capacity is the same as a small bottle.

There’s a quick refill opening at the front and room for two bottles behind the saddle on a removable adapter to save you resorting to aerodynamically compromised bottle locations on the frame. Canyon tell us that the nose bottle is ‘aero neutral’, integrating so smoothly with the frame that it adds no drag. But it does add a large surface to the front end of the bike and we noticed it catch in crosswinds, causing a steering reaction. It isn’t a major problem, just something to get used to.

Once you get over the initial excitement of riding as fast as possible for the fun of it and settle down, the Speedmax proves very comfortable. The Ergon pads feel like a favourite old sofa and the Fizik Arione K5 saddle is plush, if a bit round on the nose for anyone used to a two-pronged design. The 25mm rear tyre adds to the frame’s compliance, which is good by tri bike standards. Aero shapes are never the most forgiving but this bike won’t beat you up on poor roads and leave you wanting a lie down by T2.

Of course, how a bike leaves you for the run is more about your position than anything else. The steep seat tube of the new Speedmax makes it possible to achieve a glute-friendly posture right over, or even in front of, the BB. Not everyone will be convinced by the longer than usual cranks (175mm on this size M), though, and there’s no option to spec different lengths when ordering. “They’re specced based on our extensive knowledge and experience and we believe them to be correct for the job,” Adomeit told us.

In this tester’s personal experience, our legs feel better after riding cranks that suit our long legs rather than shorter ones that save a little hip angle. We were able to get a great position on the Speedmax, allowing the power to come easily and our legs still felt good after a fast ride. The biggest challenge might be holding yourself back on a bike that just wants to go so fast. 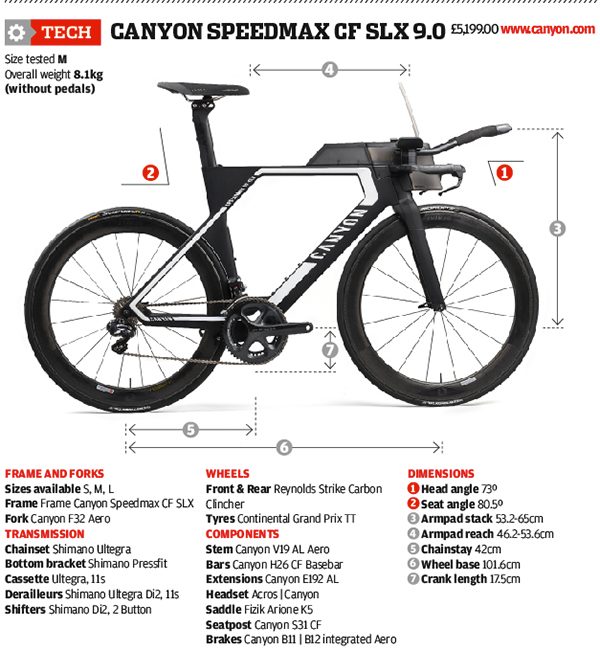