German brand Canyon were founded back in 1996 by Roman Arnold. Fast-forward to 2013 and Joaquim Rodriguez of Team Katusha rode his Canyon to third in the Tour de France. Even the 2012 Ironman World Champion, Leanda Cave, rides Canyon.

Canyon sell on the internet only so you won’t find them at your local bike shop. That’ll save you cash, but you’ll have to send your bike off for servicing and, well, you wouldn’t have a local shop if every bike brand went direct. 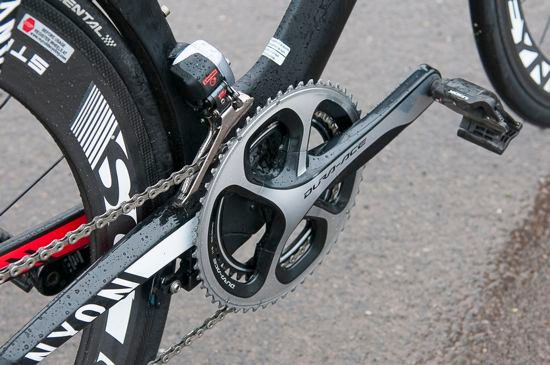 For a modern tri bike, the Speedmax has a genuine aesthetic appeal, which is largely down to its symmetry. On the UCI-legal frame, the fork and seat tube, down tube and seatstays all follow pleasingly parallel angles. Plus, the frame has done serious tunnel time under the eye of aero expert and Enve’s wheel guru Simon Smart at Mercedes GP HQ.

The tubes are Canyon’s unique Trident Profile, which they claim are more stable at speed than traditional profiles. The cockpit and seatpost have been through the same vigorous testing as the frameset and also offer a wide range of adjustability, which is important considering there are only three frame sizes.

The 11-speed Dura-Ace Di2 groupset – with battery integrated seapost – is a proven performer while the satellite shifters will save you time on hilly and technical courses. The Reynolds Assault and Strike wheels with Continental Grand Prix TT tyres are also a sensible choice for UK conditions.

The fully-integrated brakes have been a two-year labour of love for Canyon, while the Selle Italia SLR Tri Gel saddle is a quality finishing touch to a build that tips the scales at 7.92kg. 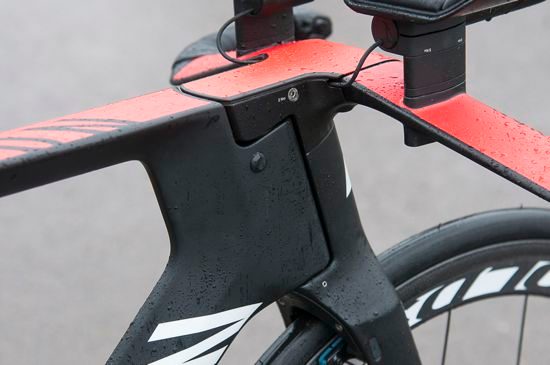 Once you’ve battled with the infuriatingly fiddly job of getting all the wiring and junction box tucked away inside the stem, you can unleash the Speedmax. Straight away it’s obvious that this isn’t a bike for gentle spins. You feel low and aggressive, and you just can’t help but go for it. The cornering is razor sharp with a precision that’s reminiscent of a fellow German that comes at twice the price tag; the Storck Aero2 IS.

It’s stiff and responsive and, with the bullhorn Di2 satellite shifters allowing out-of-the-saddle shifts at full power, short rises and accelerating out of bends is a gratifying experience. The trade-off for that sharp handling is an occasional slight sense of twitchiness, but you soon acclimatise to it and it only adds to the riding thrill. Shift into cruise mode on the flat and the Speedmax shows you the fruits of all that tunnel time, R&D and pro-level testing. The front end does feel a little harsh but, with the performance it provides, we’ll forgive a bit of chatter from rough roads. Even in blustery conditions, the Reynolds wheels punch crisply through the wind.

As expected, the braking performance is excellent and, in combination with its cornering prowess, it’s blindingly quick downhill. It’s no slouch on the ups either: if you haven’t experienced the joy of satellite shifters while climbing on a TT bike it’s not hyperbole to say it’s a revelation. The Reynolds wheels have a lively spring when out of the saddle to give a real sense that the whole bike is helping force you up that hill quickly. 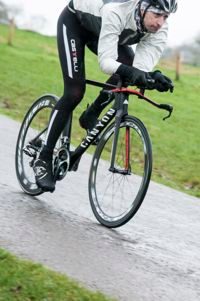 Comparisons to the Storck Aero2 say it all.

That Di2, wheels you won’t upgrade and a tunnel-tested frame.

Some noticeable front-end harshness but within acceptable limits.