For 2018, it’s fast going to become apparent that the major bike brands’ design teams have been taking more notice of rider – and not test rig – data. Put simply, road bikes are evolving. Yes, the three bikes tested here from Cervélo, Merida and BMC are at the top of the tree in their respective ranges, but we’ll be seeing more usable gearing (e.g. with Shimano’s top-tier groupset offering wider gear ranges) and provision for bigger tyres to cope with poorly maintained roads.

Let’s start with the latest model of Cervélo’s R5 eTap (£7,299), which features revised geometry and adds a healthy dose of comfort alongside its stiff, light, Grand Tour-winning heritage design. The Canadian innovators, who once again topped the annual Kona Bike Count at the Ironman World Championships in October, have promised that the new R5 is lower, sharper and smoother than previous versions. With a build that includes carbon ‘Squoval’ frame tubes, Zipp 302 carbon wheels wrapped in Continental Grand Prix rubber and SRAM’s impressive eTap gearing, could the least expensive bike on test also be the best?

Merida’s aero-optimised Reacto 9000-E (£9,000) has been revised for 2018. The Reacto is the brand’s take on an aero road bike and its angular shaping and aggressive ride position has been matched to disc brakes for 2018. It’s claimed to be lighter and more compliant than previous iterations, has gained a wind-cheating profile, shifts and brakes with Shimano Dura-Ace Di2, rolls on Vision wheels and 25mm Continental Grand Prix 4000S II tyres. Oh, and did we mention that it’s gained disc brakes?

BMC’s Teammachine has always combined light weight, stiffness and a beautiful ride quality. The new £10k SLR01 model comes with disc brakes, an innovative integrated cockpit for a clean, futuristic look and a completely redesigned frameset. Its combination of light weight, sharp handling and comfort, for a pro-level bike, has already gained many fans. For 2018 BMC also has a disc version. The question is, can it justify its five-figure price tag?

Our three bikes are all (very) expensive, but each have more affordable siblings (see box right) designed for the same purpose and with the same ride character. But for now we’ll revel in the glamour of the best of the best.

While Cervélo’s ground-breaking P5X tri bike has garnered most of the multisport attention since its launch in Kona in 2016, the R series is the brand’s Grand Tour bike, designed for big climbs and high-mileage days at fast speeds. The R series is also the Canadian’s most successful range, when it debuted in 2003 Carlos Sanchez and Tyler Hamilton both rode it to victory, and Fabian Cancellara won at Roubaix on the R3 in 2006.

The new bike has been created to improve the ride, so you’ll see simple things like an increase in the tyre clearance to enable use of 28mm tyres on a wide rim. From working with its pro team, Cervélo has also revised the geometry. Some riders wanted to get a lower, more forward position so were effectively sizing down, which could have a negative effect on handling.

Cervélo started the transition to a new geometry standard with the revised S5 from 2015, to allow for a lower position. Now Cervélo will give you a pro fit (long and low) on the S5 and R5, while lower models have a more sport-focused shape. Cervélo has also looked at bottom bracket drop, wheelbase, chainstay length and trail. Simply put, more trail adds stability, less makes it quicker to steer, so the R gets a slightly reduced trail figure, making it faster to handle. 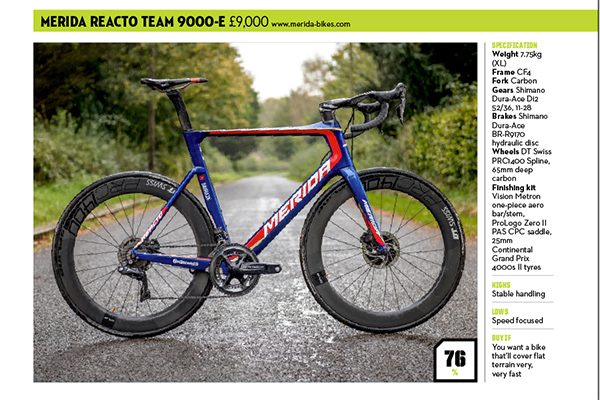 Merida splits the Reacto range into two versions. This, the £9,000 flagship Reacto Team 9000-E, uses the CF4 design, its low front end and long reach resulting in a truly aggressive ride. Lower models use the CF2, which adds a bit of height to the stack for an aero bike with a slight endurance bias.

The DT Swiss PRC 1400 wheels are smooth running with a fast freehub pick-up. These are held in place with the brilliant quarter-turn-to-remove RAT thru-axles, licensed from Focus. On a windy test day, the rims did get overwhelmed with a bit of front-end buffeting, so we switched the front out for the shallower wheel from the BMC, which achieved a great balance between speed and control.

The Reacto uses Vision’s one-piece Metron bar and stem combo. The bar angles forward from the stem by 10°, elongating the reach even more than the already lengthy frame. The mid-depth drop is comfortable with plenty of clearance for your forearm. We’re also impressed with the noise-dampening from the super-deep flat-bladed top section, which doubles as a comfortable hand-hold when the roads rise. 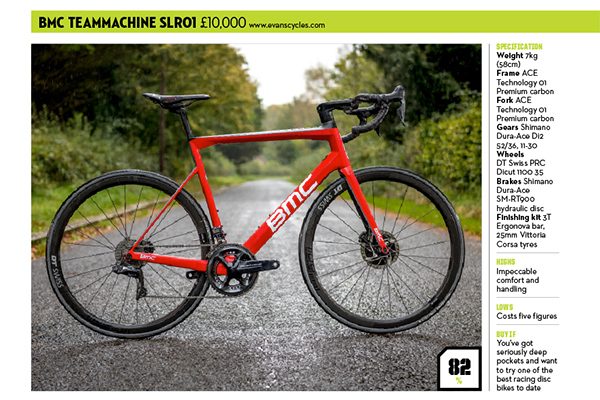 The 2018 BMC TeamMachine SLR01 model is the first to go disc in the bike’s history, although a rim version has been retained in the  new design range. There are plenty of the previous generations’ styling cues – the angular tube shapes and dropped seatstays – but it appears tougher and more aggressive than version two’s slender looks.

Asymmetry is the name of the game. The non-driveside chainstay is almost square in profile compared to the driveside, while the shape and profile of each fork leg has been altered to compensate for wind forces and the thru-axle. So, whereas a standard disc fork adds 60g + over a conventional rim brake fork, the SLR’s only adds 18g. 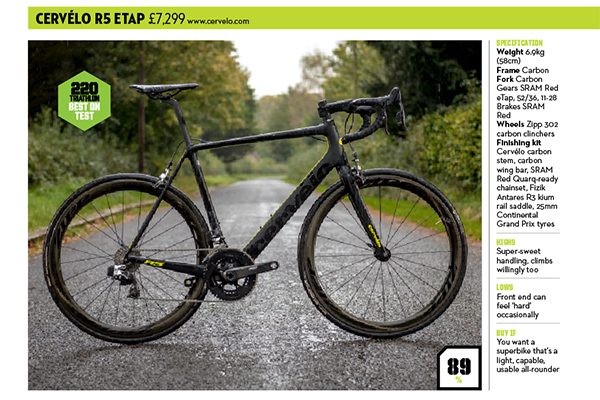 Straight from the gate the Cervélo R5 feels taut, standing out of the saddle and stomping on the pedals is met with stunning acceleration. Where it really surprises is that for a chassis that feels this stiff it doesn’t feel harsh. Settle into the saddle and get up on the hoods and the R5 is sweetly smooth, with the D-shaped carbon post, with its long, laid-back head, offering plenty of compliance.

Climbing on the R5 is a joy, the combination of lightness and a great gear range encourages fast climbs, and the balance of the frame means you’ll get out of the saddle more readily. When the road heads down the R5 becomes a truly impressive bike. The steering responses are spot on, and the ability to control the bike through weight shifts to hit the apex through a hairpin is among the best we’ve tried.

The SRAM eTap drivetrain works well. Yes, the shifts seem a little longer and more deliberate at the front than Shimano’s latest Di2, but we really love the reduction in cables, giving the R5 a super-clean appearance.

Zipp’s new 302 carbon clinchers are the aero pioneer’s latest, more affordable aero wheel, and we were pleased to find the shape isn’t nearly as bulbous and blunt as its 303 Firecrest design. We were also impressed with the tight build of the wheels, and their performance in serious crosswinds was confident.

Braking in the dry is firm and noise-free, but they lack the feel given from the Showstopper brake track on pricier Zipps, and wet-weather performance is good but not great. The new carbon bar is stiff, and well-shaped. Our only criticism is the front end does occasionally feel solid, almost a little dead feeling, and a little at odds with the smoothness of the rear.

Our Merida Reacto 9000 test bike is built for speed. The way this Reacto picks up pace is truly addictive; the rigidity through the drivetrain makes the 9000 surge forward with every stroke of the pedals. It holds that speed well, with the 65mm-deep DT Swiss rims taking some effort to get up to pace, but holds onto it with such tenacity over flat or rolling terrain that you’ll see an increase in average speeds over a standard bike.

When it comes to climbing the Reacto isn’t rapid, the combination of that long-low position, extra weight overall and deep-section rims make it a bit sluggish on steeper slopes. The flipside is that on slight inclines, up to around 7%, the Reacto is absolutley top-notch; just hunker down and power on to cut a path at a serious pace.

The Di2 drivetrain and Dura-Ace brakes are as good as they are on the competition. Merida have added cooling fins to the chainstay and fork leg, which it claims helps to reduce heat build up by 35% compared to a standard frame.
We didn’t notice a difference, but maybe it’d become apparent after a few lengthy alpine descents.

The Reacto’s 74° head and 73° seat angle put you in a very forward ride position, but surprisingly the overall handling isn’t fast or twitchy. The bike responds better to sweeping through corners with weight shifts from the hips and big lean angles more than snapping on the bar.

Comfortable compliance isn’t the Reacto’s strong suit. The aero seatpost, with an elastomer insert to reduce vibrations, largely works, and combined with a similar level of damping at the front end, the fatiguing buzz doesn’t really get through. But on rougher roads, ruts and damaged tarmac the Reacto tends to crash through.

On the road, the BMC SLR01 feels familiar; it’s imprinted with the same sharp, stiffness that impressed us with the previous version. The stiffness through the drivetrain that makes the SLR accelerate with stunning rapidity is perfectly countered by a smoothness that makes it a joy to ride.

Over rolling terrain the SLR01 is rapid, and we mean aero road bike quick. The combination of the chassis and light DT Swiss wheels makes ridiculously short work of hills, and the gear combination of 52/36 chainrings and a wide 11-30

BMC is close to perfect for a full-on race bike; its handling is a joy, and every component is perfectly matched. It’s a five-star performing bike, but it’s at least a couple of grand too much. For now it just tops our wish list.

Merida’s Reacto is similarly brilliant but as an aero bike, and again the components are superb. The Vision cockpit is excellent, as are its fast, deep-section wheels. But, as with BMC, its £9k price tag is tough to take. Would we recommend it? Yes, if you’re looking for a seriously fast aero bike. If you’re an Ironman it may just be a bit too focused on out-and-out pace, and if you’re riding plenty
of climbs we’d suggest a lighter superbike.

Cervélo’s reimagining of the R5 is a more comfortable yet racier-shaped bike, which is a great achievement. It’s a great all-rounder, it climbs and descends brilliantly, and puts a huge grin on your face. If your budget can stretch,
we’d recommend you start stretching.