Having set himself the target of swimming seven of the hardest seas in the world, British swim coach Adam Walker was crossing through the Cook Strait between New Zealand’s North and South Islands when he was joined by a pod of dolphins – and then a shark…

The starting point was at Ohau Bay, which required a 1.5hr boat ride. I tried to stay calm by joking with guide Phil Rush and my girlfriend Gemma Clarke. Just before we arrived I was sick over the side from motion sickness, but probably a bit of nerves as well. At 8:10am the swim began!

I got off to a good pace and I was a little restless, which was picked up by Phil when I came in for my first feed. He said I’ve covered 4.3k “now bloody calm down or I’ll hit you over the head with a paddle!” This had the desired effect and after a quick Powerade feed I was off and more relaxed.

I did feel the effects of jet lag pretty early on in the swim, which carried on throughout. My legs felt like jelly and I felt unusually tired. By the time I got to feed two within seconds I was sick. It could have been a little tiredness, but more likely I was getting motion sickness from the choppy seas. The sickness continued on and off and feeling flat of energy. Suddenly, from nowhere I saw a fin approaching head on at rapid speed!

It turned out to be a dolphin but not just one a whole pod! Within seconds I had a dolphin posse surrounding me. I couldn’t believe it, the whole thing was incredible. They swam alongside just within hands reach. They stayed at my pace, like they were my training partners driving me on. I forgot about the sickness and just felt so privileged. 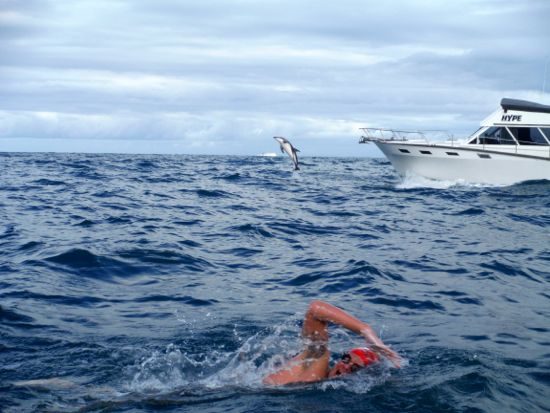 After the initial shock had subsided I tried to settle back into my stroke and got my head down in the water, which is how I normally swim in order get in a better body position. Looking down I could see a shark a few metres below the surface, appearing to drift along with little movement. I felt protected somehow by the dolphins and I didn’t want to waste any energy with concern.

I looked down a few times to see where it was and after a while it just disappeared out of site. I had already experienced sharks on the Tsugaru and Molokai swims and it’s not that you get used to it, but you have to try and block it out as you have a job to do. If I got out of the water, that would be my swim over and after all the training I wasn’t going to give up that easily!! 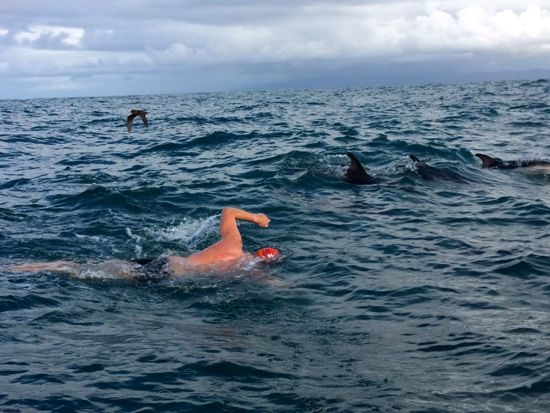 The dolphins stayed with me for over an hour, it was a very surreal experience, and they gave me a boost just when I needed it the most.

I will never know for sure the reason they swam with me for so long at my pace, it is not common for wild dolphins to do this. For whatever reason they were there I am ever grateful and honoured. They did distract me slightly from the swim and after a feed and a chat with Phil we agreed that I needed to focus. So I did just that. Shortly after, they were gone.

I did a reasonable 30mins and came in for another drink. This time I had warm water and some of Gemma’s homemade soup to settle my stomach.

Then at around five hours in I shouted to Phil, “There’s huge jellyfish!!” He shouted straight back “Just go go go, swim!!!” Phil wanted me to pick up speed, this is what I’ve trained for. I knew I could hold a strong pace as I had to do it many times across the Tsugaru Strait in Japan and I seem to be at my best when I’m under pressure. We were heading for two huge rocks known as ‘The Brothers’ and the current was strong pushing me towards them. I needed to stay on course and keep this side of them to avoid being pushed further out.

Phil was punching the air shouting “Yes Yes!!” and this spurred me on. I continued at the faster pace for around 1 hour 15 mins missing a couple of feeds. The increase in pace potentially saved the swim and once I was past them, there was around 3km to go – it was slow going with the conditions but we were over the worst of it. My final approach was one of relief!! I completed the swim in 8 hours 36 minutes.

This was an incredible experience for me in more ways than one. I am extremely grateful to swimming legend Phil Rush for his support on the swim and of course Gemma who works tirelessly to support me before, during and after my swims. This swim was my most enjoyable to date, one which reminds me why I love this sport so much!!

Adam can be contacted via his website at www.oceanwalkeruk.com. You can sponsor him at www.justgiving.com/swim4whales

How the ‘Ocean Walker’ swim stroke can benefit triathletes

10 tips to develop a positive mental attitude and stay focused