Sport has always been part of my life: I ran track at school, cross-country for my county, and was a club swimmer. Living in the Staffordshire moorlands and now on the border of the Derbyshire dales, hilly countryside has always been my training ground – I love the escapism. At the age of 13 I won a bike after being named pupil of the year at school, but it wasn’t until I was 22 that I actually got on a road bike and trained for my first triathlon.

At 21 I was studying for my dietetics degree at Nottingham university. It was during the summer of my second year when training for the Nottingham half-marathon that I began to develop health issues. To start with I was passing a lot of blood. Ironically I was studying gastrointestinal diseases at the time. After some very invasive investigations I was regretfully diagnosed with ulcerative colitis.

The disease advanced rapidly over the next couple of years – at the same time I was focussed on completing my degree course, competing in athletics and cross-country for the university, and holding down a part-time lifeguard job at the university pool. Despite the advancing illness I became interested in triathlon after entering a university aquathon and finishing first female. I then went to watch my dad (who is my inspiration) compete in an Olympic distance triathlon and from that moment on I knew I wanted to be a triathlete. I managed to compete in my first sprint triathlon two months before I was first admitted to hospital.

I continued to train even though I had to train in isolation in case of embarrassing toilet issues – luckily I continued to enjoy training in the countryside but missed the social aspect of training with a team and had to be selective with my races. For the next three years I was in and out of hospital being pumped full of intravenous steroids and placed on a concoction of different medications to try and get my symptoms under control. During this time I continued to train, race and eventually joined my local running club Sutton in Ashfield Harriers, whilst also trying to get ahead in my dietetic career at the local hospital.

During Christmas 2010 I was admitted to hospital and was told that my large bowel was disintegrating inside me, meaning surgery was the only option left. I was already mentally prepared for the eventuality of having an ileostomy and stoma bag, after months of deliberating whether this was the best option for me to get my quality of life back. Going to the toilet 20+ times a day, excruciating abdominal pains, being anaemic and tired due to extensive blood loss, frequent dehydration and weight loss were not symptoms that suited my lifestyle, and I was ready to try anything to get my life back. So after spending New Year’s Eve in a hospital bed I underwent major surgery in January 2011 and had my whole large bowel removed.

I woke up six hours later with a stoma bag and a large vertical scar down the centre of my abdomen. Monday 10th January was the first day of my big challenge to get my fitness back. My dad brought me a pile of triathlon magazines into hospital and I sat in my bed writing a list of races I wanted to do – starting with a sprint triathlon in the summer. I also wrote a list of all the things I wanted to do after surgery which I hadn’t been able to do whilst I was ill – training for a triathlon and going for a bike ride were two of these! Needless to say I’ve conquered both… 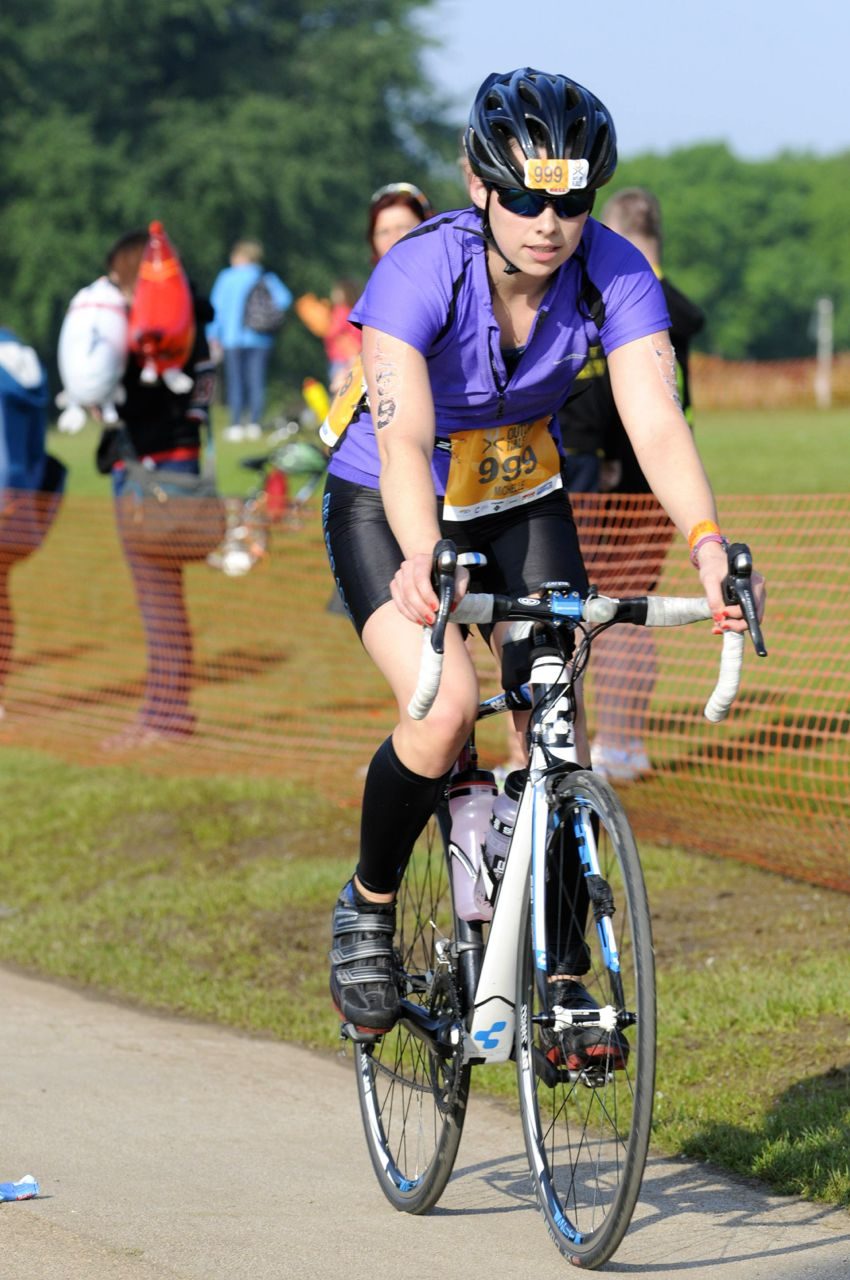 So five months post-op I raced the Rother Valley Sprint Tri, finishing in 1:30hrs with a 19:47min 5km at the end, finishing 20th female and fourth in my age-group. Next was the Blithfield standard-distance in August and I finished in 2:28hrs, coming second in my age group! Later in the year I smashed my half-marathon PB at the Worksop Half to 1:36hrs and smashed it again at Sheffield Half in 2013 with 1:31hrs. Year-on-year I have continued to work hard in my training and I am amazed at how resilient the human body is.

I enjoy pushing myself both physically and mentally and believe that the challenge I faced overcoming surgery as given me a “no guts all glory” attitude, I am more determined than ever. Whenever I am tired or really struggling in a race I dig deep and reflect on the pain and turmoil I overcame during my illness and remember the times when I was unable to compete and how miserable that  felt. This is all the motivation I need to step up my performance and put in the effort to get me over the finish line or through a lungburning training session!

During the first few months after surgery I searched for other like minded people who had also had stoma surgery. My mission was to find another budding triathlete or sports person to give me confidence that it was possible to compete at a high level. I finally found the charity now so close to my heart called Ostomy Lifestyle, and immediately became involved through fundraising, taking part in sporting events and even a catwalk show!

I also helped them to develop the Ostomy Lifestyle Athletes group on Facebook which has attracted sporty “ostomates” from all over the world, each inspiring one another, sharing their sporting achievements and providing invaluable advice to newbies post-op. In July 2014 I finally met a group of Ostomy lifestyle athletes when we came together as a group of eight to complete the 24hr Adidas Thunder run. It was surreal running 12 miles at 1:30am but the whole experience was totally worth it just to spend the weekend with such inspirational people.

2014 has definitely been my year as I am now feeling fitter than I ever did prior to my illness! After coming first in my age group at Southwell Sprint Tri I felt stronger than ever and ready to face my biggest sporting challenge yet – the Outlaw Half. This was my first ever middle distance triathlon and having the race number 999 I was convinced it would also be my last! After getting very little sleep the night before and fuelling up on caffeine, porridge and a few Haribos for good measure, I made my way to the end of the rowing lake at Holme Pierrepont for a 7am start. Perfect conditions meant we watched the sunrise as the first wave of athletes made a start on the swim. 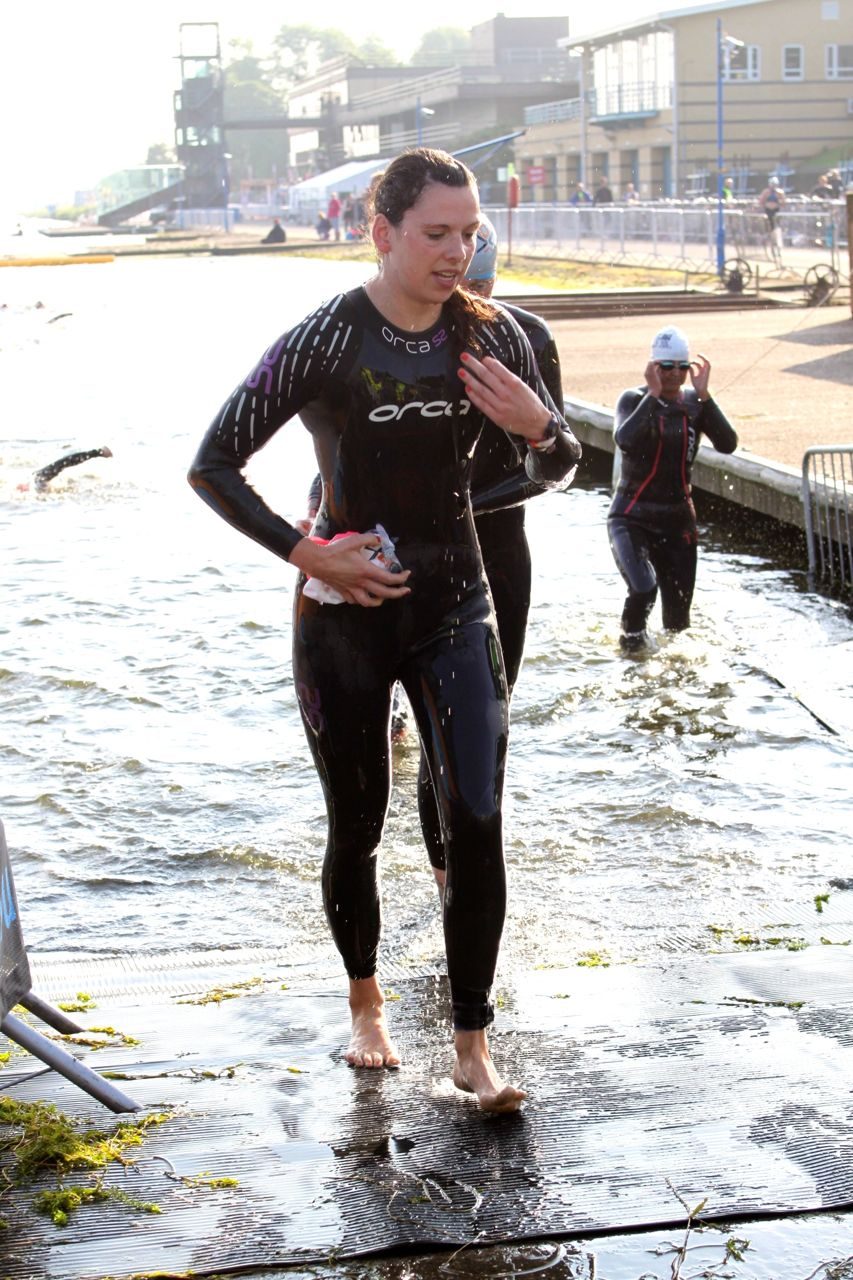 The swim was good fun and a refreshing start, albeit very weedy, and I was 15th lady out of the swim and fourth in my age-group. After faffing about in T1 I got out on the bike for the 90km of Nottinghamshire countryside… I really enjoyed the flat roads after training around the Derbyshire hills, and I was surprised at the speed I could maintain! After a toilet stop at the top I carried on and completed the ride in 2:57hrs, leaving me eighth in my age-group and 47th female.

I then lost another 4mins in T2 after stopping for the toilet (stoma issues) before starting the half marathon. The midday sun was strong and I made an effort to keep hydrated and had the odd energy gel to keep sugar levels up. My run training with Sutton in Ashfield Harriers totally paid off as I overtook numerous athletes that had flown past me on the bike.  As I expected the final mile down the home straight felt like a whole marathon in itself but I managed a sprint finish, overtaking one last man at the finish line for an overall time of 5:14hrs, placing me fourth in my age-group and 15th lady overall. I celebrated with a post-race (non-alcoholic) beer! 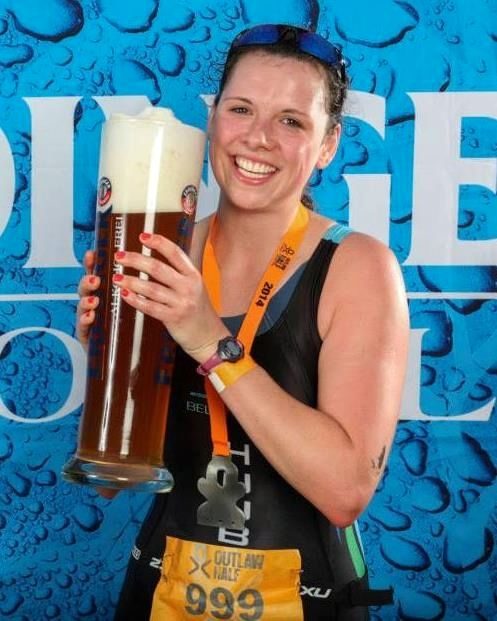 My next race was only two weeks later, the Rother Valley Sprint Tri. I have competed in this every year since my surgery year and have seen my times come down each time. Last year I won my age-group and realised I could have entered my intent to qualify for the European/Worlds Age-Group Championships. But this year I was on top of my game and decided to register. Result! My Outlaw Half Legs still had some sprint in them and I finished in 1:23:29 with a 5km run time of 18:49! I was third in my age-group and second qualifier for the Europeans! Over the moon is an understatement for how I felt that day. Since then I have recently treated myself to a TT bike and raced it in the Ripon Standard Tri in July, finishing in a time of 2:17:33 and coming second in my age-group.

This summer got even better after a colleague encouraged me to apply for a 12-month sports scholarship for one talented athlete from Derbyshire, Staffordshire and Leicestershire at the FIFA Medical Centre of Excellence at St George’s Park. The Perform centre at St George’s Park is home to top-class clinicians and state-of-the-art equipment with an internationally-renowned centre of excellence for sports and exercise medicine, performance science, injury rehabilitation and strength and conditioning.

After being shortlisted to attend an assessment day involving fitness tests and an interview, I was selected as the Derbyshire athlete! I will be receiving 12 months of free support with strength and conditioning, sports science testing, rehabilitation and massage from a panel of expertise – a fantastic addition to my preparation for Geneva 2015.

My focus for the next 12 months is to not only continue to train and compete but to get the message out there that having a stoma is not the end of the world – it is actually the start of a better one! There are no limits to what can be achieved after overcoming such a traumatic challenge and I want to help raise awareness for those who have stomas that they can do anything they put their mind (and body) too.

Humans are very resilient and adaptable creatures designed to move, so if you have had stoma surgery and are thinking about getting back into a sport or activity or even wish to try something new – give it a go! Don’t let your stoma hold you back – you have conquered so much to get to where you are and life is for living so be proud of who you are and what you have achieved. I know I am.