As you may recall one of my major aims in preparation for the Windsor Triathlon is to lose a few pounds. Not only do I want to be able to comfortably slide into my wetsuit for the open-water swim, I know that being lighter is a good way to get significantly quicker.

According to Joe Friel’s Triathlete’s Training Bible, losing 10lb of body fat would mean I could complete the 10km run section two minutes quicker and cycle hills 7 to 10 per cent faster (page 321 if you don’t want to take my word for it).

Up until now I’ve always been unsure of how to get the balance right. I want to have enough fuel in the tank to power through training sessions and I want to make sure I’m getting the right nutrition for recovery afterwards. But at the same time I don’t want to be piling on more calories than I’ve burnt off.

As a few refreshing pints of ale followed by a large pizza doesn’t seem to be doing the job, Powerbar kindly arranged for me to speak to Ironman Wales champion Scott Neyedli, who’s in slightly better shape than me, to get some nutritional advice. Here’s how it went… 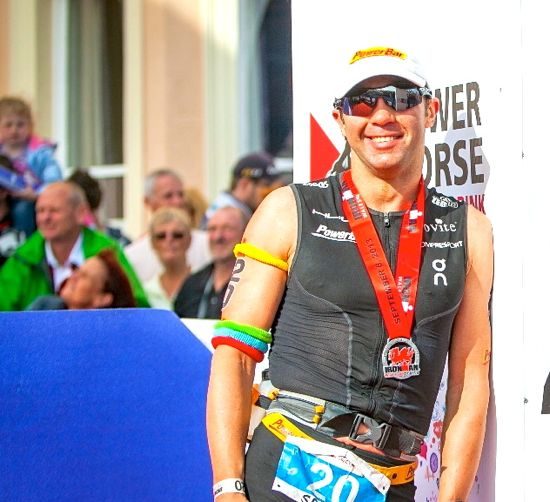 Me: What’s the best way of balancing losing weight but also ensuring I’m taking on the right nutrition and energy to fuel training?

Scott: What I try to do to stimulate a fat burning session I’ll run or cycle for my commute to work several days a week and I’ll do that in a fasted state. I won’t have any coffee or food when I wake up in the morning which is only about 30-45 minutes depending on whether I cycle or run but it’s a smart way to optimise the session. If you’re commuting to work it’s not really a training session but if you are doing it fasted your insulin levels have levelled out while you were sleeping so everything should be at a base level. You don’t want it to be a high intensity session though, keep your heart rate at zone one.

Me: What about recovery after a training session. How do I make sure I don’t pile the calories back on?

Scott: I’ll have a low carb whey protein shake to help repair the muscles 30 minutes after exercise. The best way is to limit the carbs but try to replenish the muscles so you’re able to go and hit the sessions the day after and the day after that.

Me: What would you recommend days leading up to the race so you’re fuelled but not going in feeling bloated?

Scott: I’ve seen a lot of people get this idea of carb loading with heaps of pasta and heaps or rice on their plate, but it’s two or three times what they would normally eat. That’s just going to lead to gastric issues or bloatiness. A week before the race you shouldn’t be doing the same amount of training that you normally do (tapering). So the frequency of your sessions will reduce but your meal size stays the same – you  might reduce protein and increase the carbs. It results in carb loading anyway because you are reducing your training and getting more rest.

Proof is in the (lack of) pudding

While I am not yet quite up to Scott’s racing standard I have certainly dropped some weight in recent weeks after taking his advice. Having a bumper lot of goodies from the fine people at Powerbar has certainly helped, particularly munching on protein bars straight after exercise which has helped stave off any cravings for less nutritional snacks.

This has resulted in markedly improved cycling and running times, and with Open-Water Season just about upon us I guess it will soon be time to see if I can also shoehorn myself into the wetsuit…

David will be reporting back soon on his preparations for Windsor Tri, watch this space!