Once you leave the comfort of the pool, a wild world of sea, lake, dockland and river swimming awaits. For each, correct body position and a calm, strong stroke are essentials. For each, good technique and practice is vital.

However, the respective bodies of water also challenge you in very different ways. Swallowing a mouthful of freshwater’s far nicer on the palate than its salty, sea contemporary, for instance. But as you’ll find out, there’s a lot more to it than that…

>>> Prepare to swim in open water for the first time

The biggest challenge with sea swimming is the waves. It could be dead calm or you could be fighting shore breakers, and a swell that makes sighting very difficult, which can mess with your breathing and stroke patterns.

Classic pool swimmers have high elbows, slower cadence and a glide at the front of the stroke, which is great in a flat swimming pool, but not as efficient in choppy open water. The ideal is increasing arm turnover, having a straighter arm recovery and a strong, quick catch.

Using something like a Finis Tempo Trainer will teach you to generate a faster arm turnover in pool sessions, though start over 50m and 100m because it can be tiring. Also do the heads-up drill to improve your catch, which is your front-crawl stroke tweaked slightly by keeping your chin on the surface of the water and eyes pointing forward. This also helps with sighting. Add this drill to all of your warm-up sections. 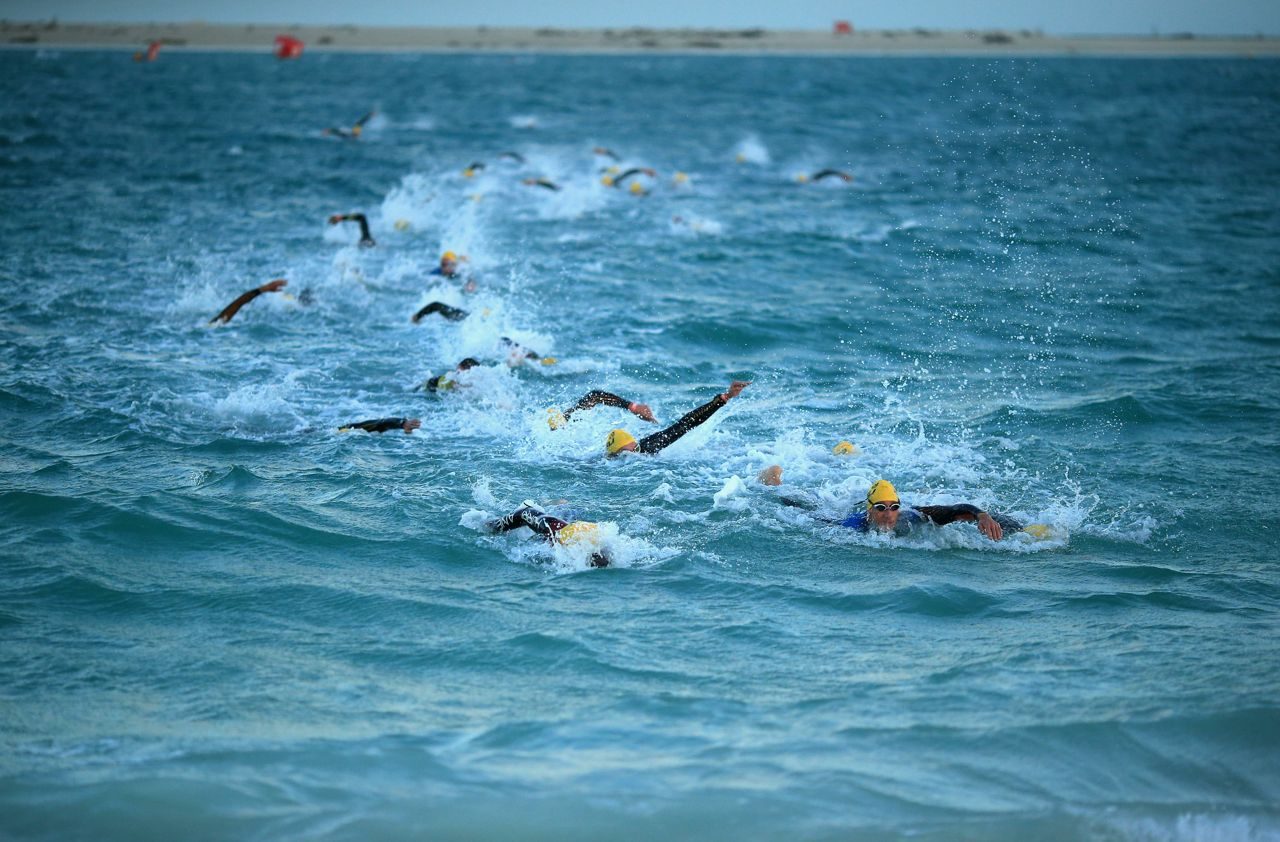 The waves and chop mean breathing to your favoured side might be impossible, so you should practise bilateral breathing (breathing to both sides). Swim 100m reps and vary breathing. So one rep would be breathing every three, five, seven, five and then three strokes. Another would be every two, four, six, four and two strokes. Change breathing side for the different sets.

Race examples: For the longer-course athletes, you’ll find two laps of a choppy sea at IM Wales (eu.ironman.com). There’s also the Castles Challenge Triathlon (www.castlestriathlon.co.uk), which has sprint- and middle-distance offerings and the swim takes place in the North Sea. 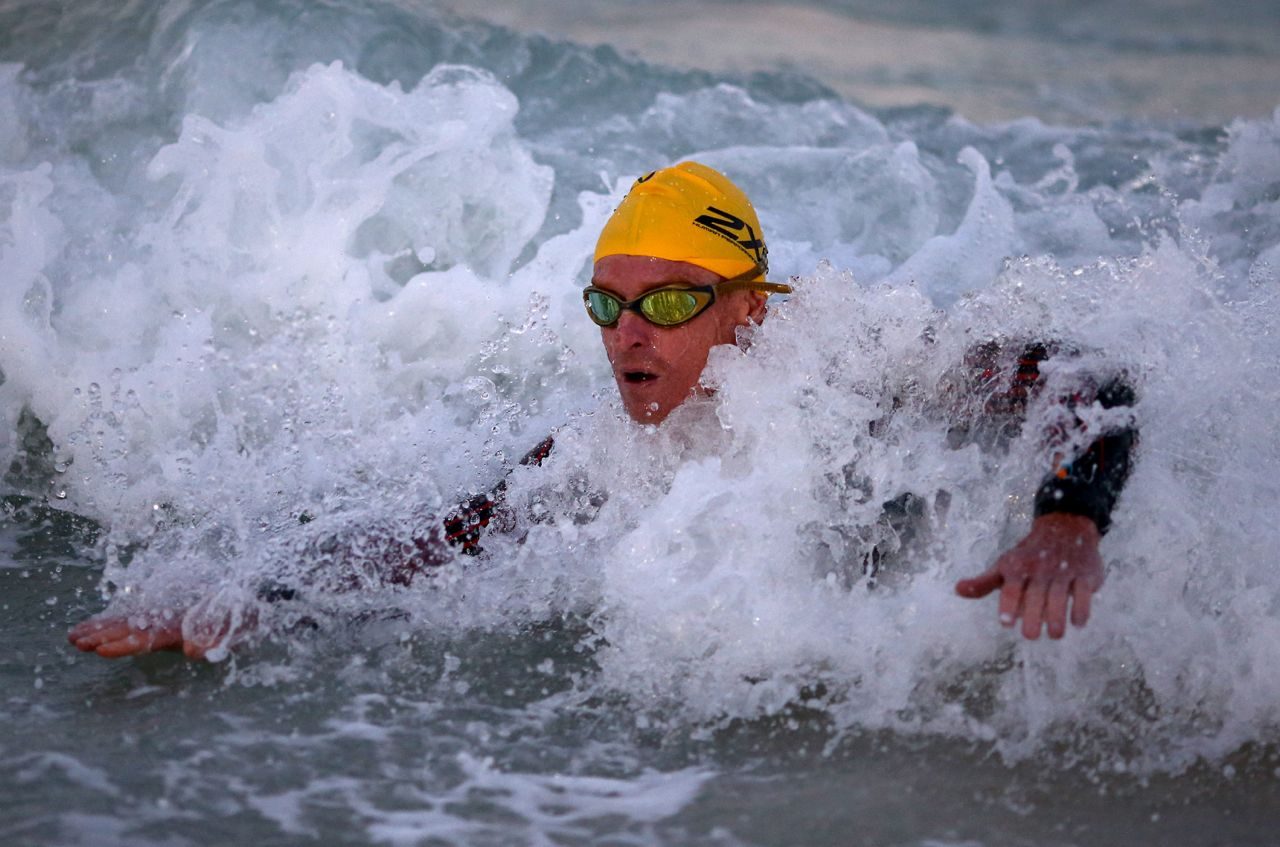 Richard Stannard, aka The Fish, works on technique at his open-water swim venue, the Triathlon Training Centre in Marlow. Even though it’s a lake, Stannard also teaches his disciples river techniques…

The biggest challenge you face in a river is the current. Not only is there the resistance upstream, but its strength is constantly changing year upon year, meaning you can’t just follow what you’d done previously.

Key is positioning. If you imagine a cross-section of a river, it’s shallower near the banks before deepening in the middle. Deeper water equals faster water so position yourself around the middle when swimming downstream.

Conversely, that’s why you should place yourself near the banks when swimming upstream – the water moves slower. In my time I’ve pulled up shrubbery, weeds… I’ve even banged my hands on boats at Windsor in search of the path of least resistance.

One method to practise positioning in the pool is to swim right by the lane or side. Using a straight-arm recovery will inch you even closer to the side.

The person in front can save you 5-10% effort, though the current means you should draft on the feet and not the hip. You can mimic this in pool and open-water training in a group. The leader sprints 25m and then 50m before you change over. As the leader, your aim is to drop the others. As a chaser, you want to stay behind and receive a tow.

If ever I had to pass Windsor in the winter, I’d stop and have a look at the river because that’s when it’s at its best flow, so you can see where the main channels are and where you should position yourself. You can do that in the spring, too, but the flow’s not as fierce. Either way, a good course recce’s essential.

If you’re turning from upstream to downstream, you should delay coming off the bank as long as possible so you almost swim past the buoy. You should then come across into the current, which will naturally sweep you around the buoy. Many triathletes turn out into the river too early, which slows them right down.

Race examples: Windsor’s (humanrace.co.uk) probably the most famous one, though there are others like Fowey (www.foweyrivertri.com) and the Bastion (www.castletriathlonseries.co.uk). 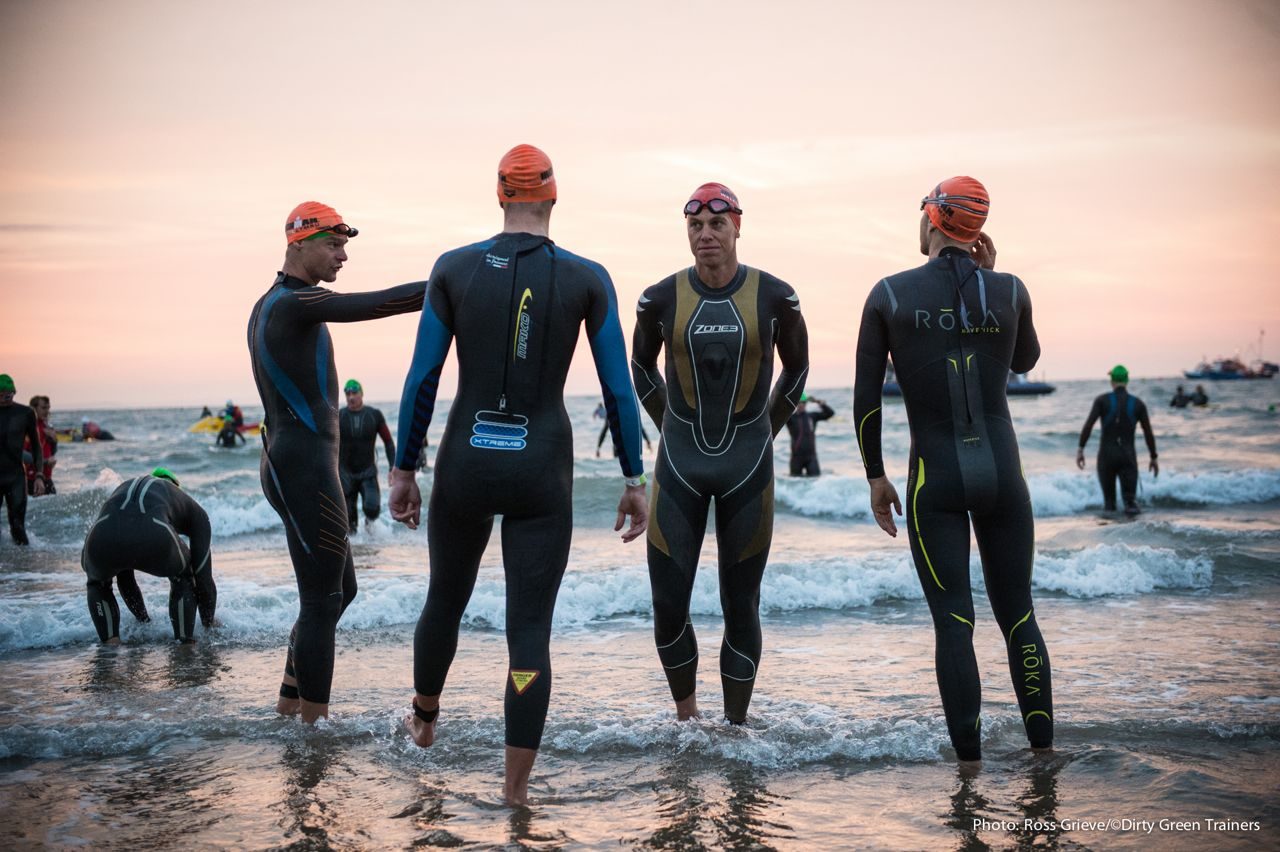 We conclude our guide to conquering open-water swim challenges…

The head coach at Swim for Tri, Dan Bullock, guides you through what in principle is the simplest body of water to swim in…

Lake swimming is a sensible option for your first open-water swim. Unless you’re unlucky, it should be a lot calmer than the sea and river, which means you only need minimal changes to stroke dynamics and body position. But with no riverbank to guide you, sighting efficiently is important.

Because there are no waves or current, you can keep your eyes as low as possible in a lake and so remain streamlined. The technique we prefer is: slight head lift, eyes up and looking forward, and then breathe as you rotate your head to one side before immersing in the water. 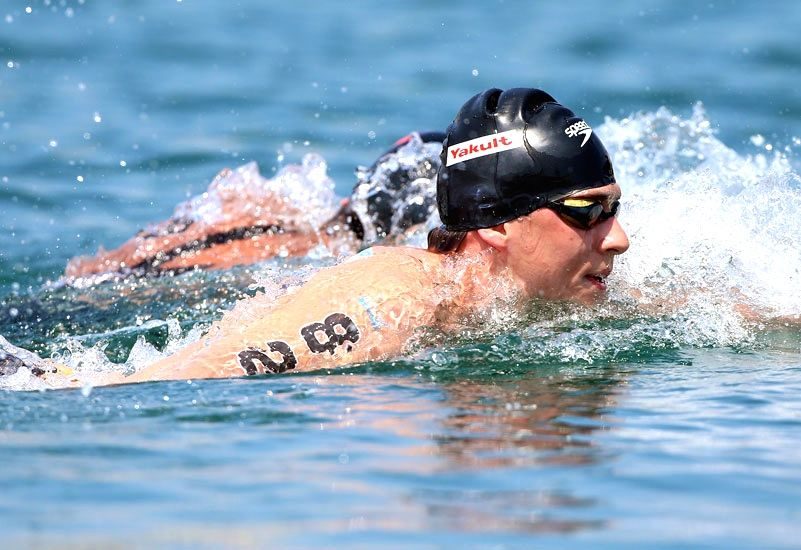 That way, you shelter the breath and get air in the pocket to the left or right. It’s the famous ‘crocodile eyes’. If you lift your head up, eyes up and breathe simultaneously, water will flow down your throat.

You can practise this indoors by lifting your head two or three times in the middle of a 25m length. But make sure you fix your gaze on something, not just look randomly around. I’ll ask my swimmers what number the second hand was pointing at on the clock. It just gives the drill more purpose.

You need to sight a landmark bigger than a buoy because even if the swim’s only 400m, a 6ft buoy’s not something you can pick out quickly and clearly. At Hyde Park, one way there’s a tower block and the other there’s a break in the tree line.

And that last point’s key. Often if there’s a continual tree line, you might be lucky and find a gap, which comes in very handy for sighting. Sometimes what’s not there can be very useful. 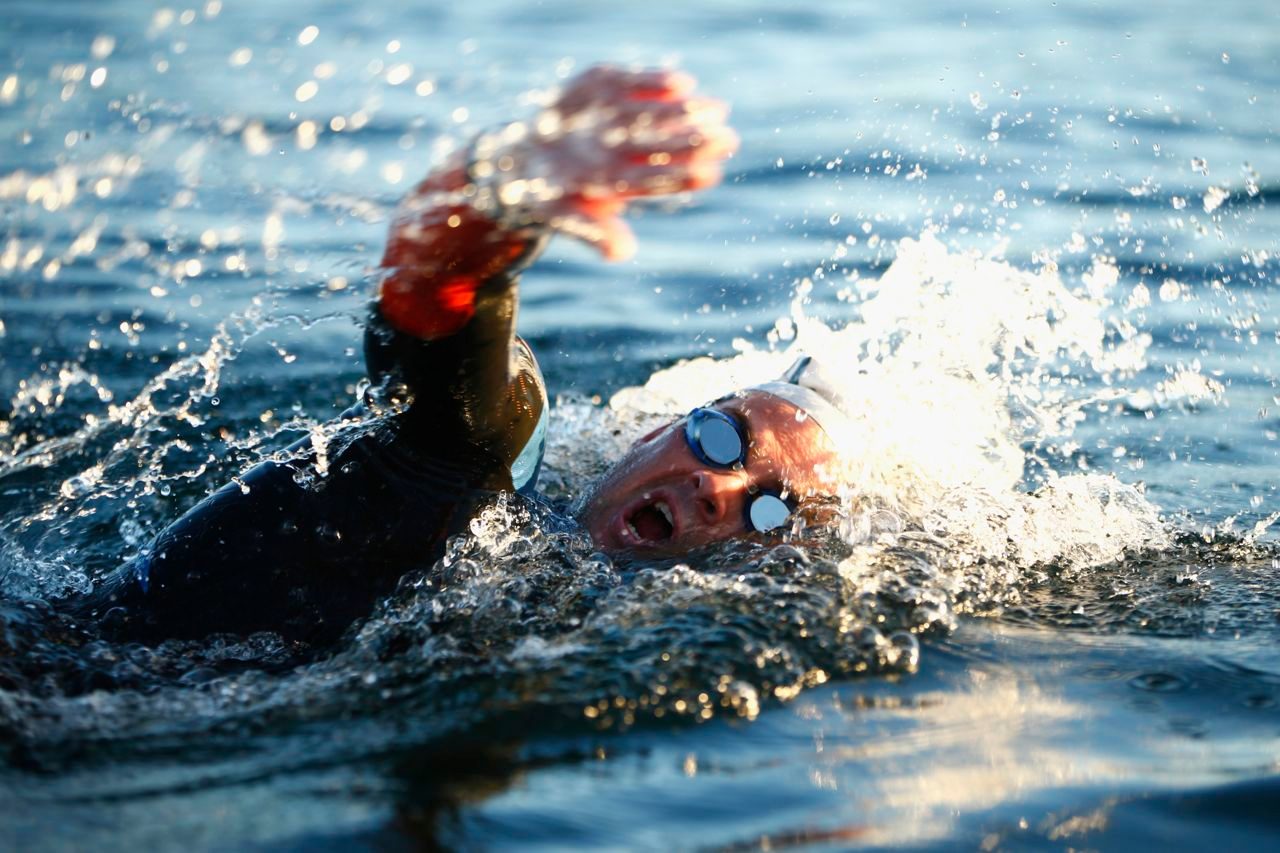 Nine out of 10 lake starts will be in deep water so make sure you’re prepared to position yourself correctly. I remember when Vic [Victoria Gill, top multisporter and Dan’s partner] competed in her first triathlon at Hillingdon. She was still off warming up when the gun went! A good warm-up’s essential but give yourself at least a minute to be in the right starting position for you.

In our pool and outdoor sessions, we’ll often throw in a subset or a final set where we’ll tread water and grow confidence in being vertical. We’ll then float into the horizontal position. When that gun goes and everyone transitions from vertical to horizontal, people are too close to each other and can panic. Starting in a horizontal position creates space and affords you two or three relaxed strokes to get into your rhythm. 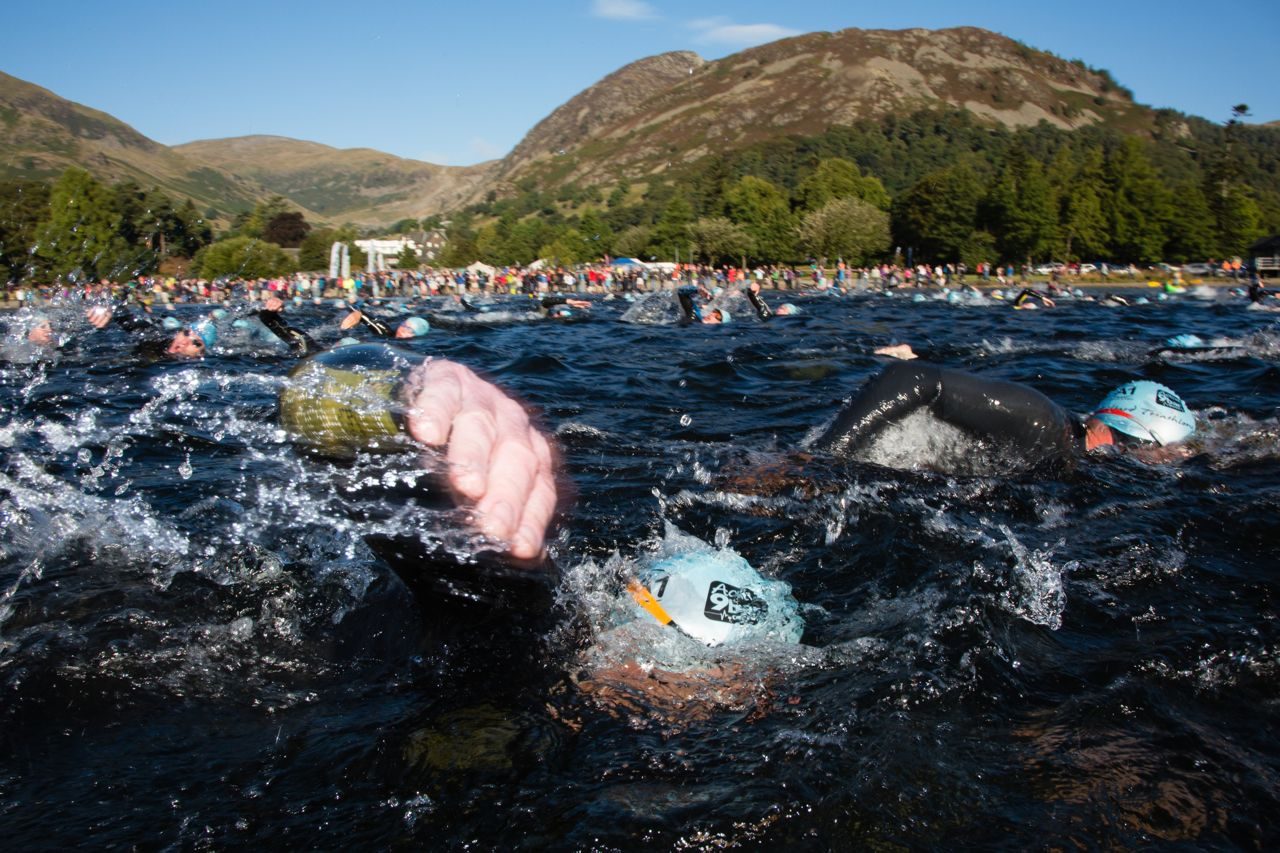 Race examples: The majority of open-water triathlons in the UK will be in a lake or reservoir. The Dambuster’s (www.pacesetterevents.com) one of the most well-known and happens at Rutland Water, while a number of races take place at Dorney Lake, Eton (humanrace.co.uk or www.votwo.co.uk/events). There’s also Bala (www.wrecsamtri.org.uk), though gusts can create choppy conditions.

For lots more swimming advice head to our Training section