Don’s rivals included the USA’s Tim O’Donnell, who came fifth at Kona 2013, and Brazil’s own Igor Amorelli, who emerged with the British athlete from the waters of Lake Paranoá with the lead pack of six swimmers. Tyler Butterfield (BMU) and Santiago Ascenco (BRA) were in the next group, over 90secs off the pace.

Early on the bike, O’Donnell pushed to the front and never looked back through the remainder of the ride. Amorelli, Don, Butterfield and Ascenco appeared content to let O’Donnell lead the way and the four dismounted their bikes together, all within two minutes of the American.

Once on the run, Don moved to second and clawed back time on O’Donnell during the first half of the run. It was not a matter of O’Donnell slowing down (1:16:20 run split) as much as it was Don’s impressive pace (1:13:20 run split).

Just before 17km Don made the pass for the lead and then went on to capture the Ironman 70.3 Latin American Championship title in 3:41:47. O’Donnell followed Don across the finish line 52secs later in 3:42:40, while Butterfield finished off the podium, stopping the clock at 3:45:48.

Don has already won Ironman 70.3 Monterrey this year, and told us in the April 2015 issue of 220 Triathlon that he plans to do a competitive 70.3 season until mid-July before the focus swings to Kona.

Having won on his full-iron debut at Ironman Mallorca last year, many people – including Spencer Smith, Britain’s top-placing male at Kona to date – believe Don has the ability to claim victory on Big Island this October.

Haley Churla (USA) led the women out of the water, but was only three seconds ahead of Helle Frederiksen (DEN). The next closest women was Rachel Joyce (GBR), who was over two minutes behind.

Frederiksen stormed to the front of the race and pulled away from her closest rivals, Chura and Sofie Goos (BEL), for the entire ride. By T2 Frederiksen’s lead was over seven minutes.

The run was much of the same for Frederiksen as she expanded the gap. Goos would eventually overtake Chura for second, but her run pace was no match for the leader. 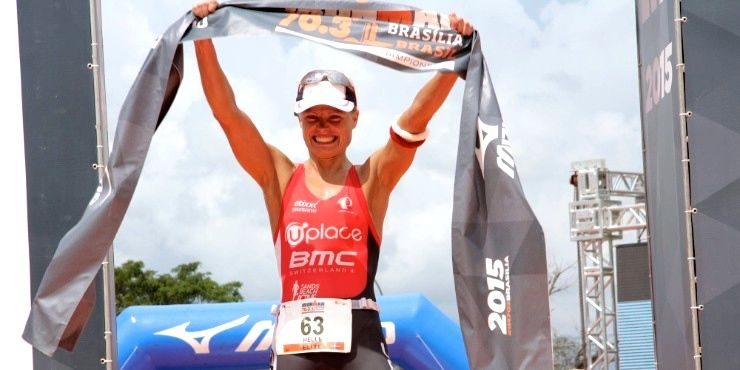