Why should you bother with aerobars? The Brownlees don’t and they manage to do okay.

Then again, they have a few other things in their favour: nature, nurture and the rules. They’ve been gifted with a high level of endurance that has been carefully honed during years of training. Also they’re allowed to draft. And those of us who don’t race in the ITU World Series aren’t.

Drafting – sitting in the pocket of low-pressure air directly behind the rider in front – saves you a serious amount of energy on the bike. But what do you do if you can’t draft? Well, you could train your backside off to get fitter, or spend a small fortune on an advanced, high- performance bike. And although there’s a strong case to be made for both of those options, the other, which is significantly easier and cheaper, is to get a set of aerobars.

Aerobars put you in a more effective riding position. Not only do they bring you forward so you can put more force into the pedals, they also make you more aerodynamic by allowing you to lower your head, flatten your back and tuck your arms in. You probably still won’t match the speed of the Brownlees, but you’ll get a lot closer to emulating them with a set of aerobars than you would with normal handlebars. 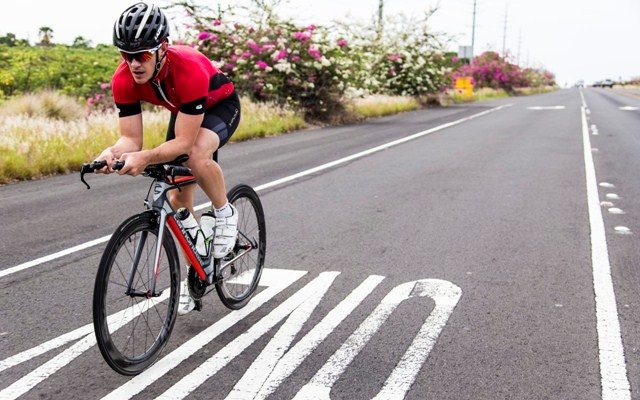 So what aerobars should you buy? They boil down to two categories: clip-on and integrated. Clip-ons are simply a pair of armrests and extensions that, as the name suggests, clip on to your existing handlebars. Integrated aerobars, on the other hand, are the ones that look like a model of something you might find flying around in a Star Wars film, and replace your existing handlebars altogether.

Which type you should buy will depend on how much racing you intend to do, how seriously you want to take it and how much you’re willing to spend, but our grouptest will help you narrow down your choices a little further. 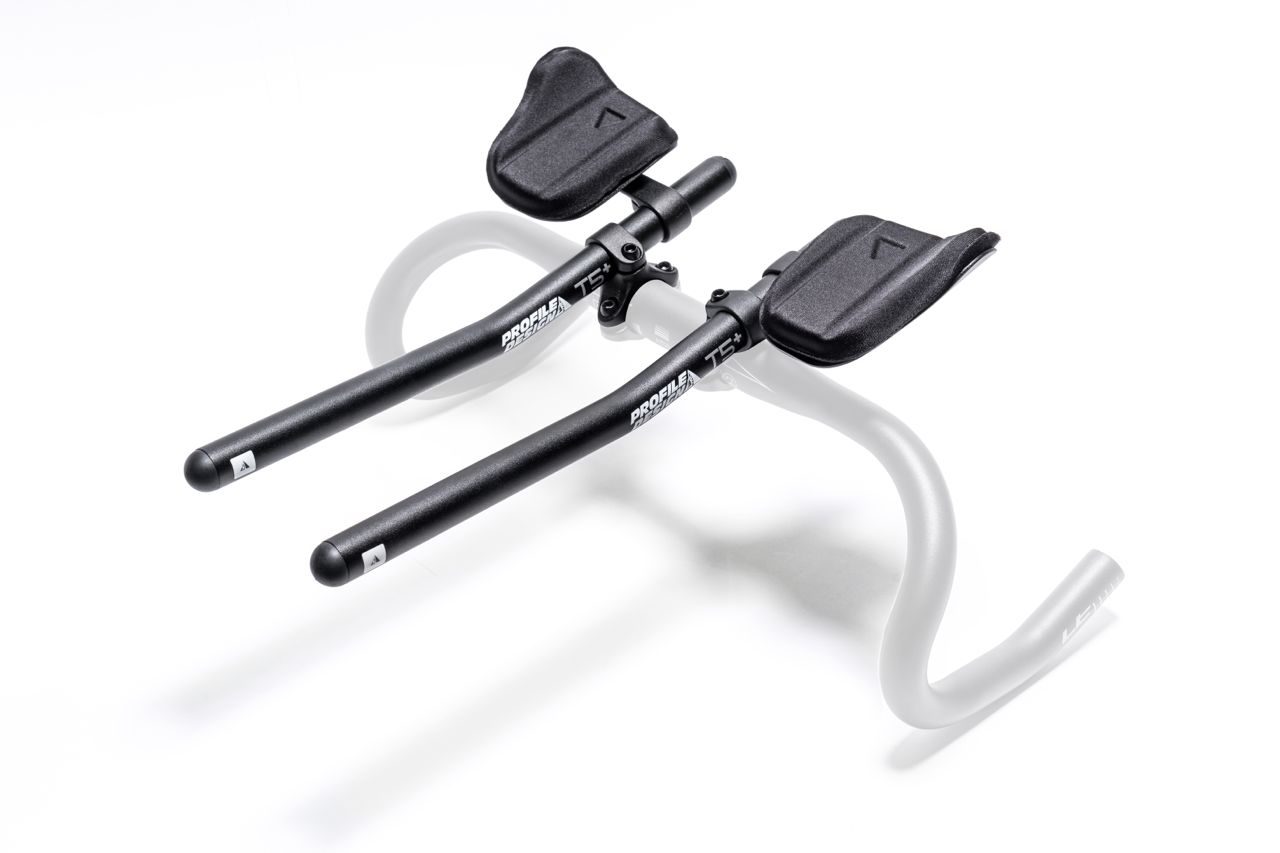 Rushing out to buy Profile’s T4 Plus clip-ons on the strength of their class-winning performance in our April 2014 grouptest would have been a wise decision. They’re light, adjustable, have smart clamps and great armrests. There’s no reason to regret your decision.

Well, there wasn’t until the arrival of the T5 Plus bars. They may be aluminium instead of carbon like the T4s, but they’re lighter (507g), cheaper, have a gentle ski-bend that’s comfortable to hold and possibly the best armrests on the market – providing fore/aft and rotational adjustment and shaped so they don’t saw at your forearms when you’re riding on the hoods.

Fitting can be fiddly as the handlebar clamp bolts are positioned facing upwards in between the extensions. But that’s a minor niggle in an otherwise superb package. 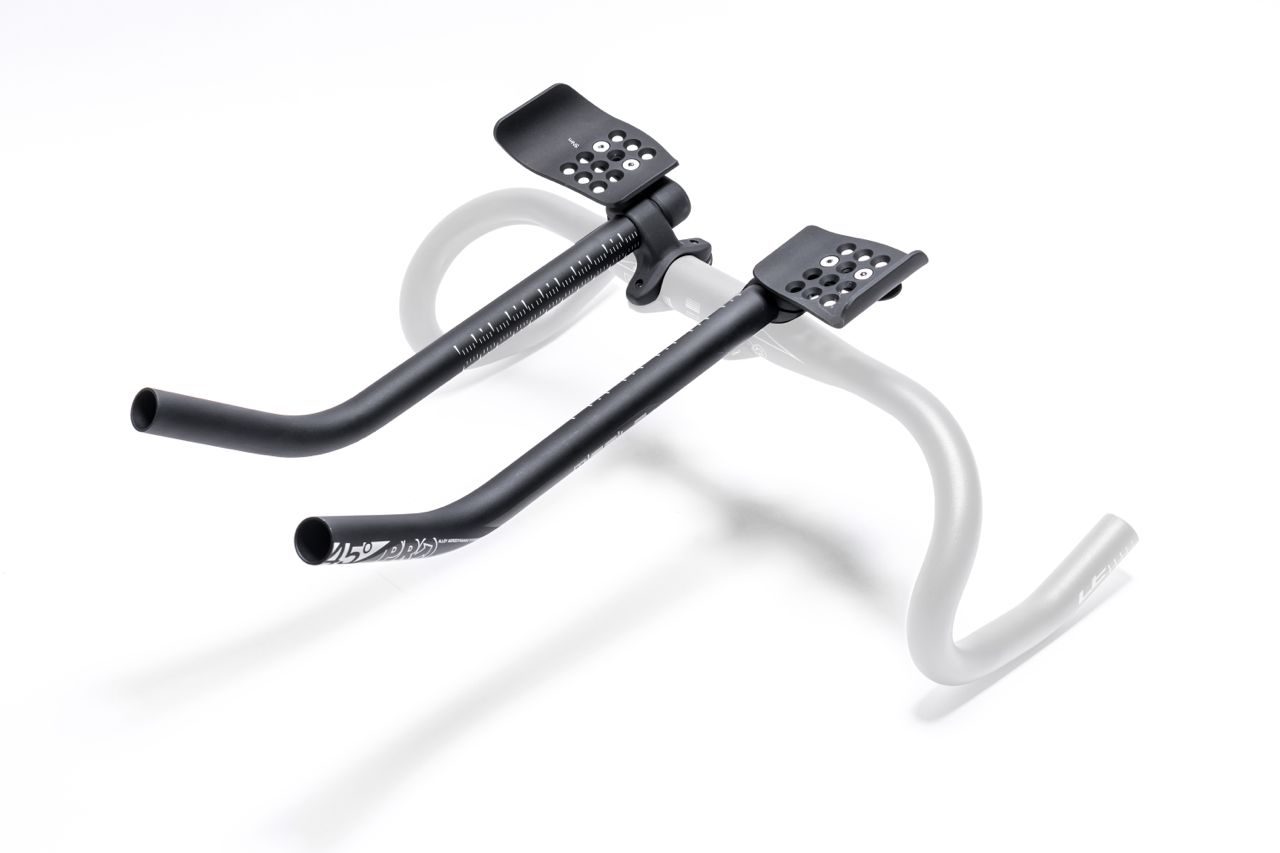 These no-frills clip-ons show that sometimes the simplest approach is the best. Almost identical to the Profile Design T5 Plus bars, they use just a couple of cinch clamps to secure the armrests to the extensions and the extensions to the handlebars.

As the name suggests, they’re made of an aluminium alloy (the Evo version is carbon) and they weigh in at just 494g. If the 45° ski-bend extensions (seen here) aren’t to your liking, there are tri and S-bend alternatives.

Aside from the fact that you can’t route cables internally if you decide to run these with bar-end shifters, there’s very little not to like. The armrests are well-shaped and the pads are comfortable, and the option of siting them either in front or behind the extension clamp gives you a wide range of position options. In short, they’re great.

Verdict: Easy to use and highly adjustable. No cable routing, 92% 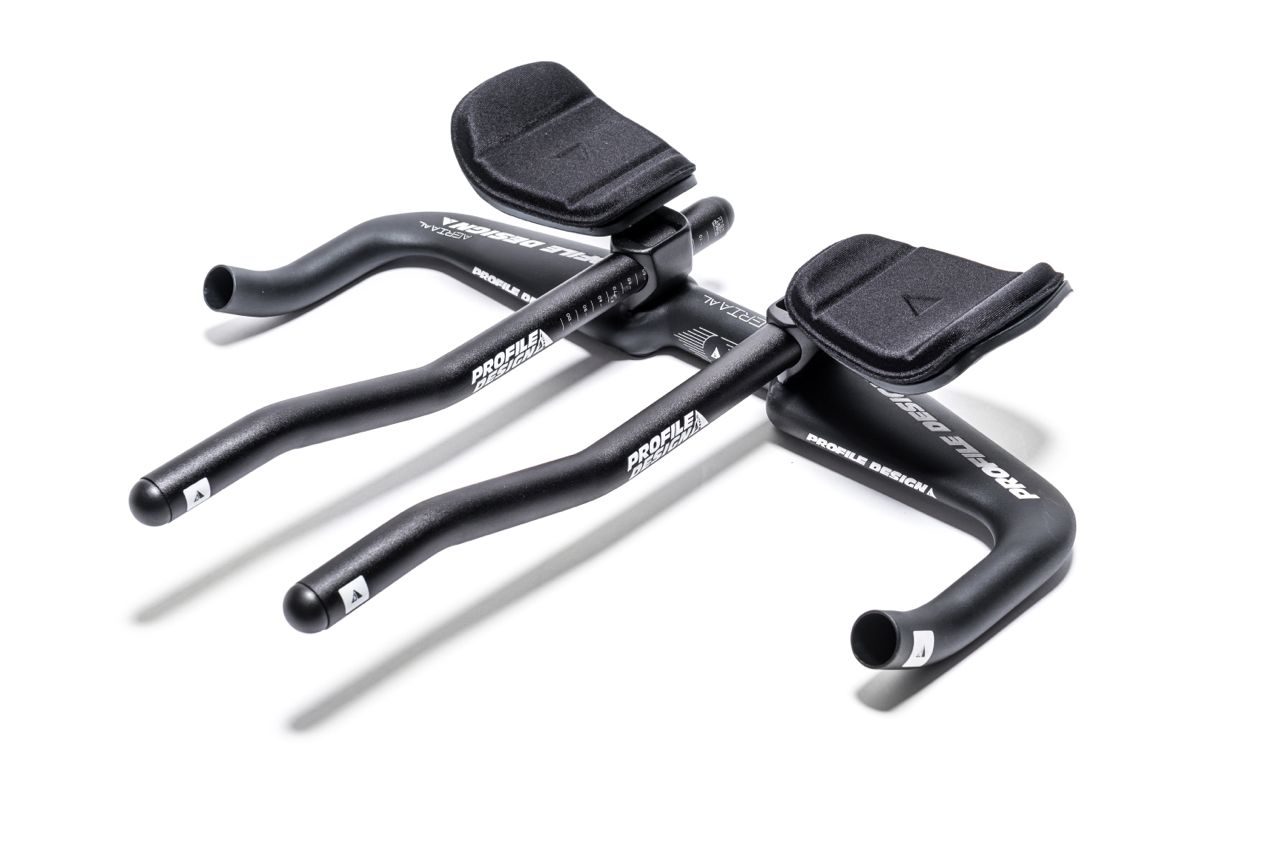 These are the aluminium version of Profile’s Aeria T2 carbon aerobars that came top in last year’s grouptest (April 2014). Aside from the material, there’s very little difference between the two – both are superb. In its most basic, riser-free configuration, the AL weighs in at an impressive 786g, although that’s without a built-in stem.

Risers allow you to increase the stack height from 55mm up to 135mm and there’s acres of adjustability in the big, comfy armrests (fore/aft and lateral) and S-bend extensions (reach and rotation) too.

With internal routing for cables and a base bar that, unlike many, manages to be a comfortable place from which to steer and slow down, the Aeria AL is a seriously attractive option. More attractive than its carbon equivalent that costs twice as much? Quite possibly.

Verdict: All the class of its carbon stable-mate, but half the price, 96% 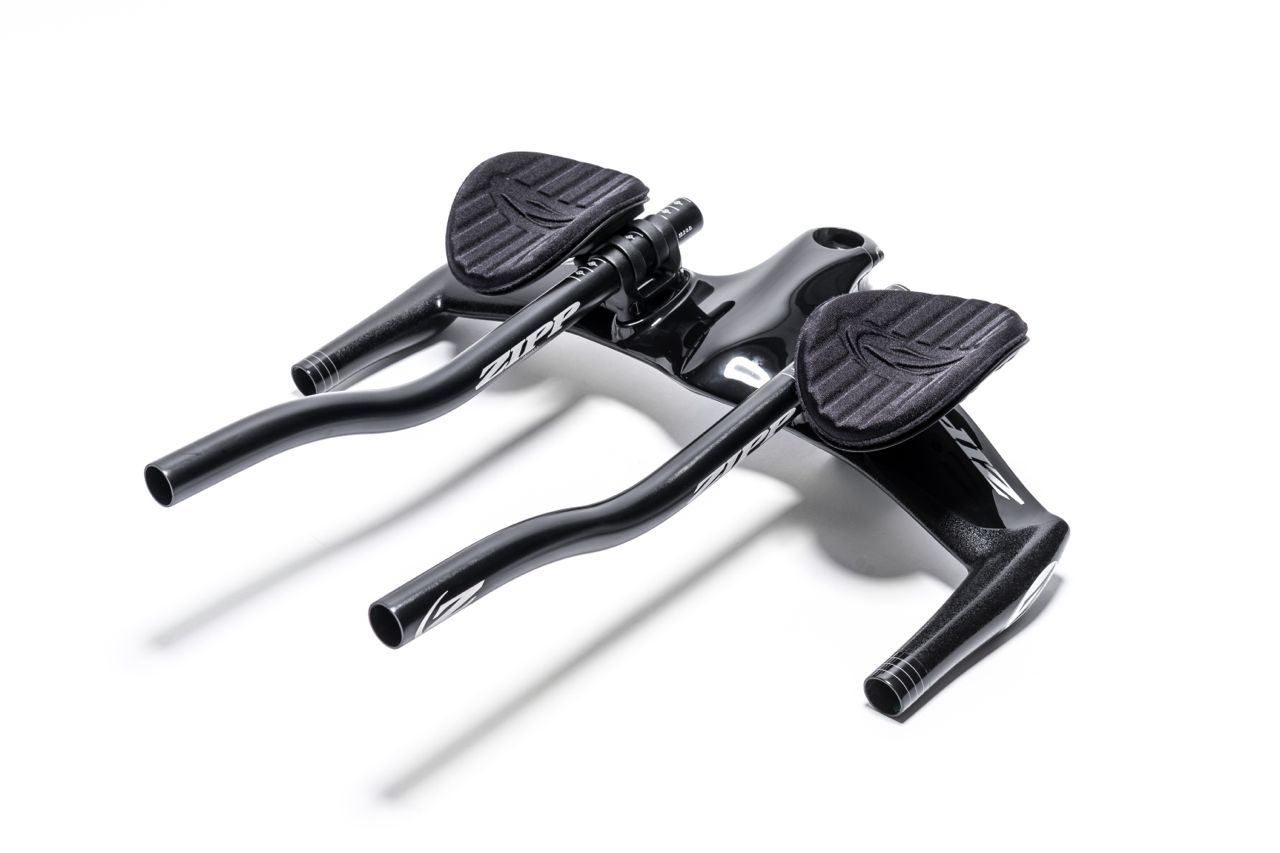 They’re not the most expensive set-up here, but £813 is still a lot of money, especially when you factor in the extra £100 for the extensions. But you do get an integrated stem as part of the deal (bringing the weight up to 832g).

As you’d expect, there are ports for internal cable routing and there’s grip coating too, but only on the bullhorns, not the tips of the extensions. There’s also more adjustability than any other bars here, with fore/aft movement in the armrests (which are big and supportive), the armrest mounts and the extensions.

You have two options for extension width, depending on which way round you run the clamps, and they can also be tilted up or down by 6° as well as raised. So funny-money territory, unquestionably, but you can fine-tune your position with the utmost precision.

Verdict: Unparalleled adjustability, but at a whopping price, 85% 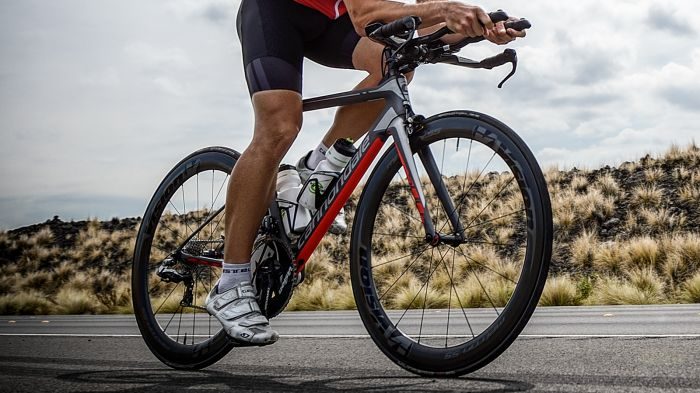 We continue our guide to this year’s best aerobars, and deliver our verdict…

>>> For lots more advice on the best triathlon gear money can buy, head to our Gear guides 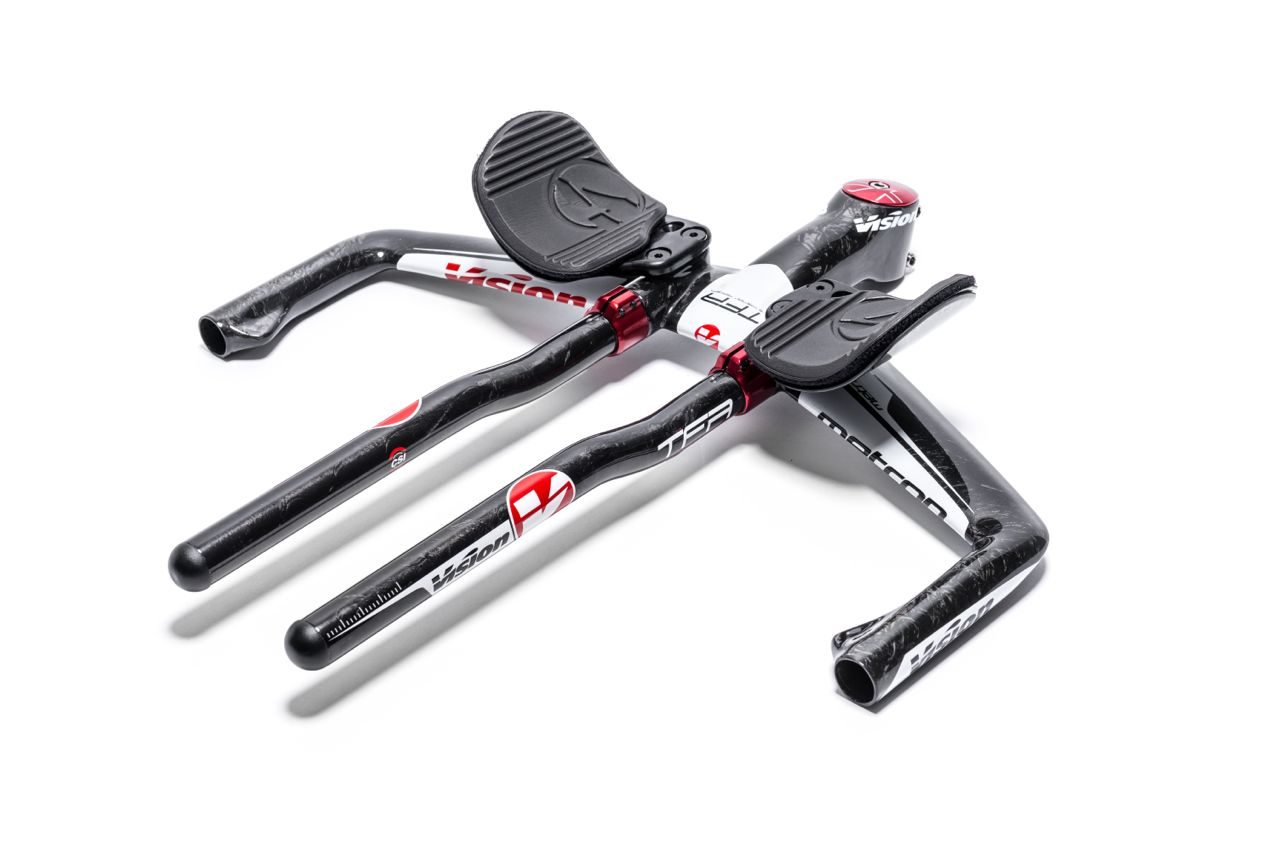 For integrated bars with a built-in stem, these are light – 641g. When the Metron was last in 220 (November 2013) it was 780g, but that had built-in brake levers, whereas this Di2-compatible version lets you choose your own.

Other than that, it’s basically the same: an expensive, carbon aerobar that’s fine if it works for you. Making it work for you may prove tricky though. Reach adjustment involves taking a saw to the extensions and width adjustment relies on rotation, which alters your wrist angle.

There’s some height and width adjustment in the armrests but, again, your wrist angle and comfort is compromised. All this wouldn’t be such a problem if the extensions were wider apart, but they’re so narrow you find your thumbs fighting for space like the battle for the armrests on a plane. 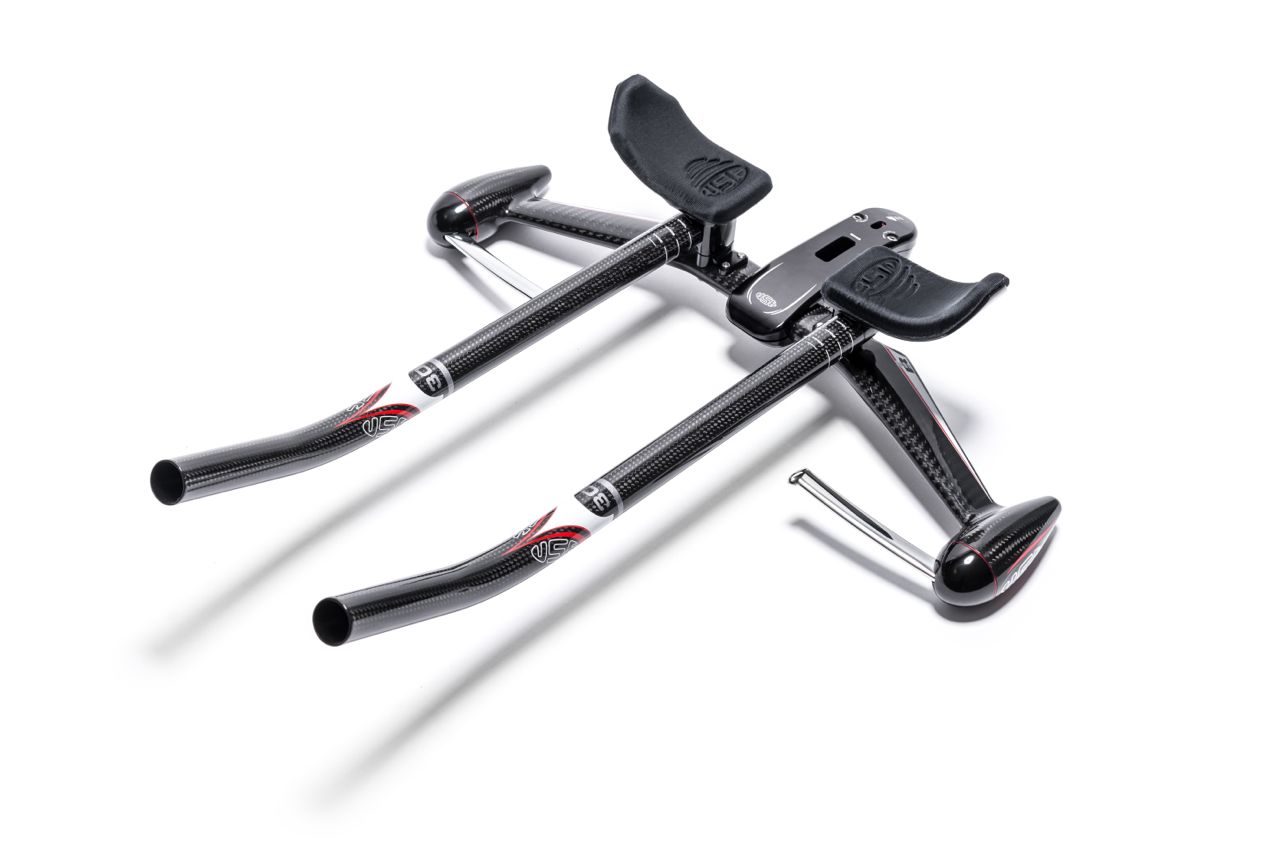 The bullhorns, or rather bull pods, on USE’s 811g R1 bars are by far the nicest on any aerobar, not just visually but also in terms of comfort. Their bulbous ‘speed egg’ shape fits in your palm better than any curved or swollen tube.

Sadly the same can’t be said for the brakes. On paper, mounting the levers like this seems like a good idea, but in practice pulling them with your thumb doesn’t generate enough stopping power and their flat, bladed profile cuts into your fingers when you use your whole hand. They’re also a faff to set up as you have to disassemble the pod to fit the cables.

That aside, they’re lovely bars. There’s width/height adjustability in the armrests, although adjusting reach requires a saw. The small armrests are fine, although you might want something bigger for longer rides. 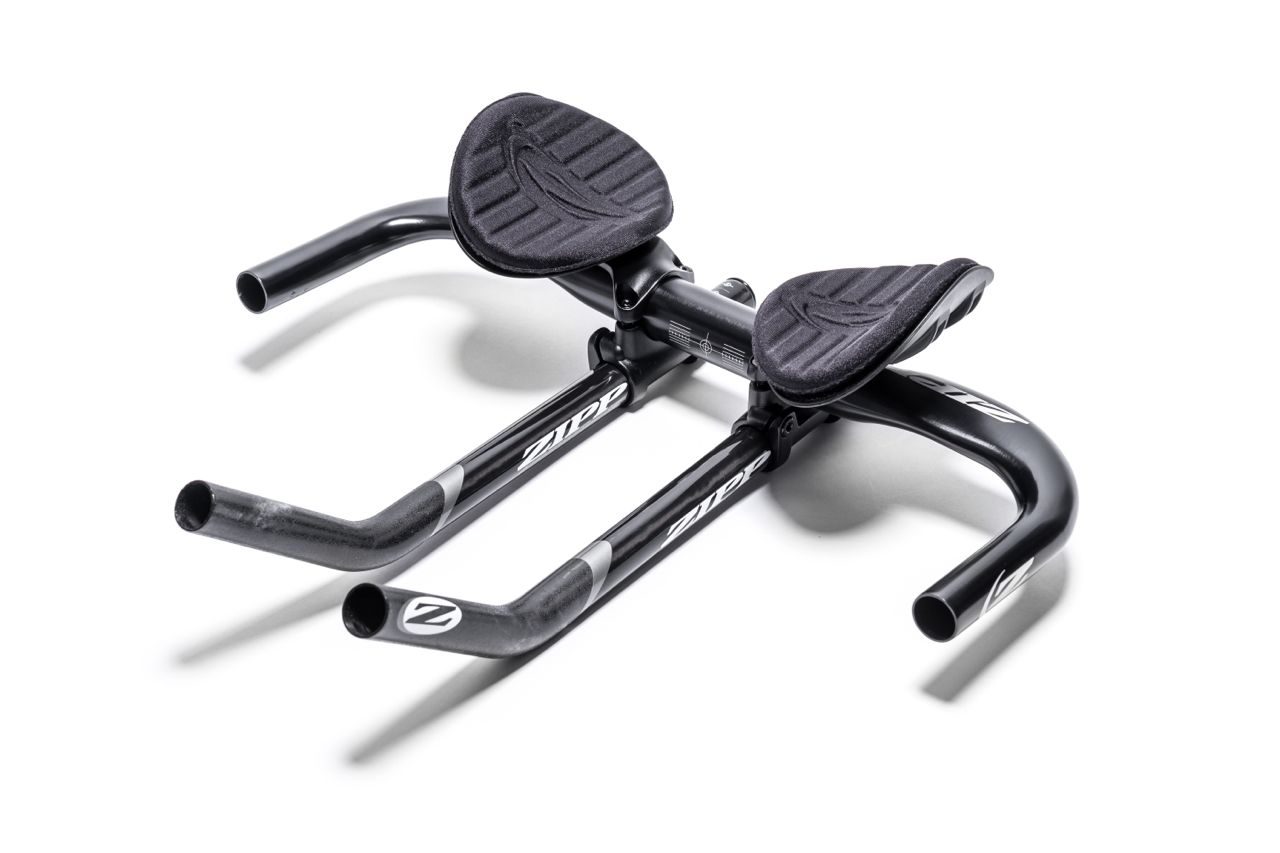 This is a modular system: a pick’n’mix set-up in which all the parts are sold separately. You choose whether you want above- or below-the-bar clamps, the shape and material of the extensions and how many risers you want, then attach the whole lot, along with the armrests, to your bike.

The test sample came with below-the-bar clamps and ski-bend carbon extensions, and tipped the scales at 465g, making them the lightest full-length clip-ons here. Given the range of options, they’re easy to tailor to your positioning needs, although the Profile T5 Plus bars do an almost equally good job for nearly half the price.

The armrests are great and, despite being the biggest on the market, manage to let you use the hoods and the tops without a problem. The grip coating on the extension tips is an especially nice touch.

Verdict: Outstanding clip-ons, but twice the price of the T5 Plus, 90% 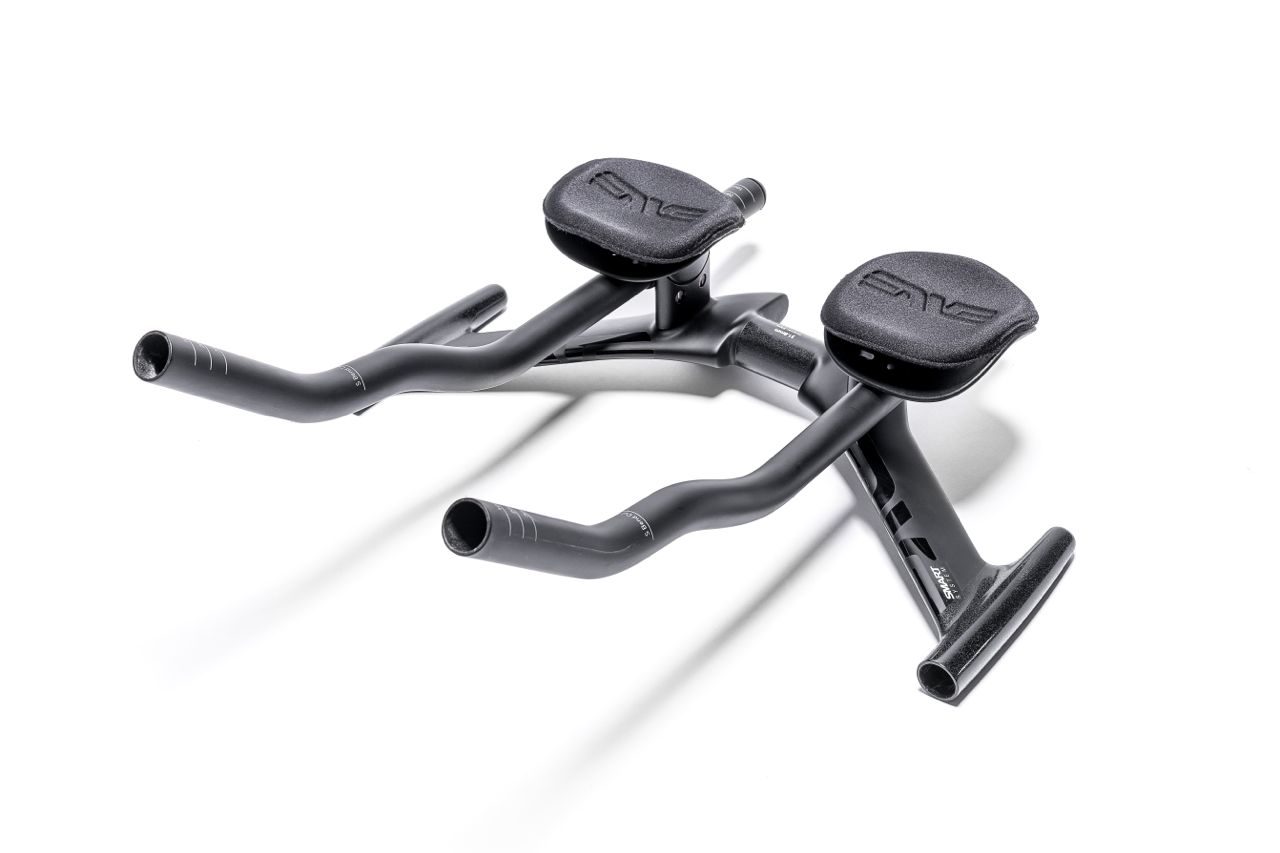 The Enve may sit in similar funny-money territory to the Zipp Vuka Stealth, but it’s an equally serious cockpit. It’s a full-carbon set-up with a huge amount of adjustability and gives you the option to run your extensions above or beneath the base bar.

It weighs in at a svelte 746g, but it has the advantage of lacking an integrated stem. Tailoring the extension and armrest position to your needs is easy given the range of height, width and reach adjustment provided.

If you’re looking for a set of bars to spend extended periods hunched over, you could do a lot worse. The bullhorns get a grip coating, but it would be nice to have it on the extensions too. And although you won’t be spending that much time on them, the bullhorns do feel a little thin and austere after you’ve been treated to USE’s pods.

Time to give the Allen key a rest and decide: which bars had us tucked up comfortably and which proved to be a drag?

In the absence of of independent aero data, this test has focused on ease of set-up, adjustability and ride comfort. And ride comfort is arguably the most important factor since it doesn’t matter how aerodynamic you are if you’re too uncomfortable to push the pedals. Remember too, your saddle is as important as your bars when it comes to putting your position together. Chances are, you’ll have to bring your saddle forward, tilt the nose down and maybe even run your seatpost at a different height.

As far as clip-ons are concerned, Zipp’s Vuka AL bars are very nice and have loads of positional options, but so do the Profile Design T5 Plus bars. The T5 Plus bars are a little heavier and lack the riser options, but they manage to give the Zipps a run for their money in the comfort stakes, despite being half the price. 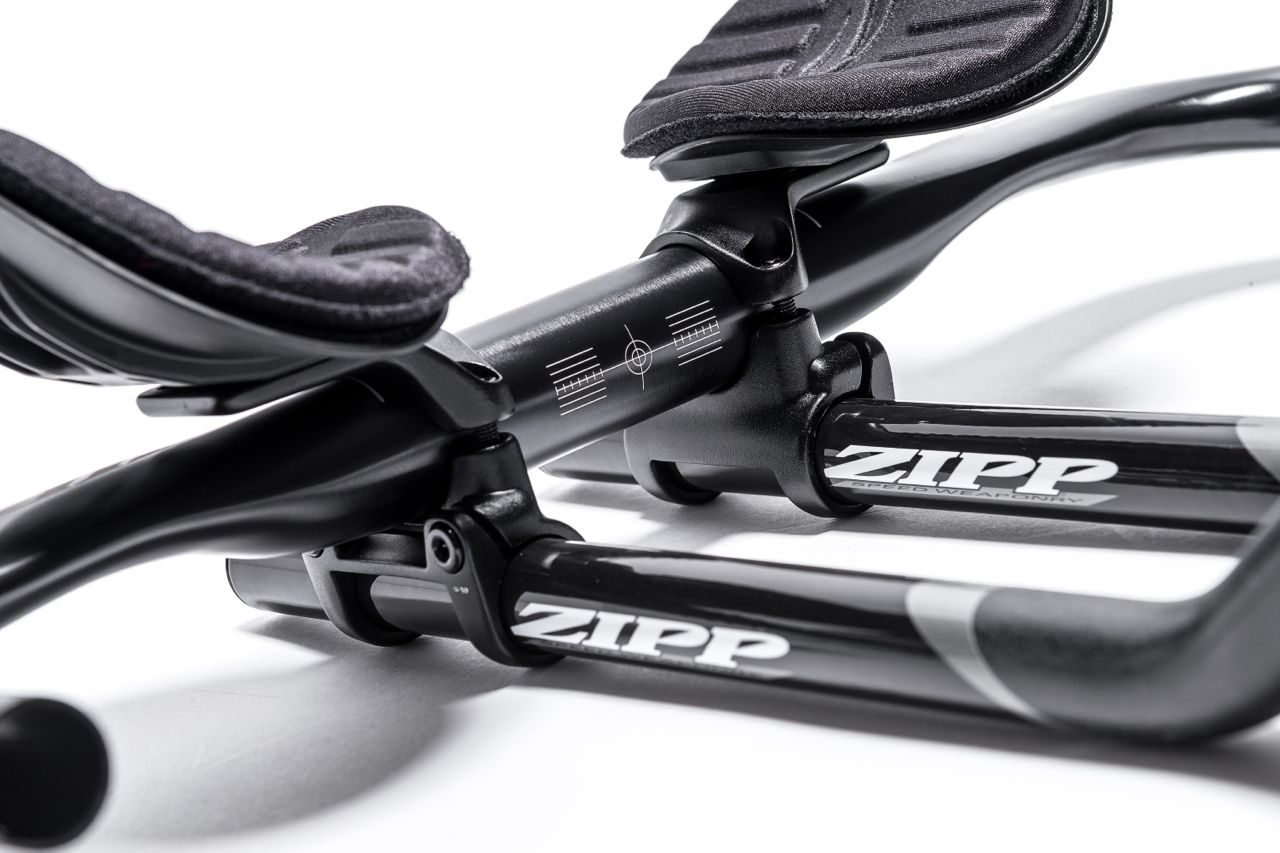 The Pro Missile Alloy bars are the only spanner in the works for the T5 Plus set-up. Pro’s bars are the same price, just as adjustable, just as comfortable and they’re also a little lighter. The only thing they don’t have is the option to run bar-end shifters with internal routing. It’s a minor issue, but it’s enough to give the Profile bars the edge here.

In the integrated bar battle, there’s only one realistic winner: the Profile Design Aeria AL. The Enve, Zipp and USE bars are all superb, but you could buy another bike for the price of them. If someone else is writing the cheque, by all means choose one of those. But if the cash is coming from your own wallet, get the Profile Design bars because, whatever performance gap there might be between the Aeria AL and its rivals, it isn’t £700 wide.

>>> For lots more advice on the best triathlon gear money can buy, head to our Gear guides