If triathlon isn't enough why not try quadrathlon? As well as the three disciplines of tri this multisport also includes kayaking for the true adventure sport junkie

Quadrathlon is a multisport event that comprises of four disciplines: swimming, kayaking, cycling, running. It had its roots almost 30 years ago when the first event was held in Ibiza in 1987. The initial race was a very tough 5k swim, 20k kayak, 100k bike and 21.1k run – essentially a middle distance triathlon but much harder! However, such was the interest that three years later in 1990 the World Quadrathlon Federation (WQF) was created.

The sport has remained relatively quiet in the intervening years, but since the World Cup Series commenced in 2001, there has been an upsurge in interest, in particular more significantly in the UK during the last three years.  In addition to the WQF events, the British Quadrathlon Association (BQA) run a British National Trophy Series. This comprises five races of varying distances and a mixture of the four disciplines, although all start with the swim and end with the run.

The series includes the British Championships and two other national or even European Championships.  Some of the races are real tests of endurance, whilst others offer a manageable new challenge for multi-sport athletes looking for something a bit different.  The main events are held in Brigg, Doncaster, Box End, Shrewsbury and Bude, although more challenging races in slightly different formats are held in Scotland and Wales.

Swim: Always open water, the swim distances in the UK generally vary from 500m through to standard Olympic distance (1.5k). Some are river based swims, but Quad racing also caters to those who enjoy lake or sea swims.  Depending on location and water temperature, wetsuits are usually advised or compulsory.

Kayak: The kayak section usually follows the swim and distances range from 4.2k – 10k.  Using a variety of water sources such as shallow lakes, canals or rivers for racing on, kayaks can be hired, borrowed or owned by the quadrathlete (racing K1, slalom boat, river racer, general purpose sit-on kayak etc). 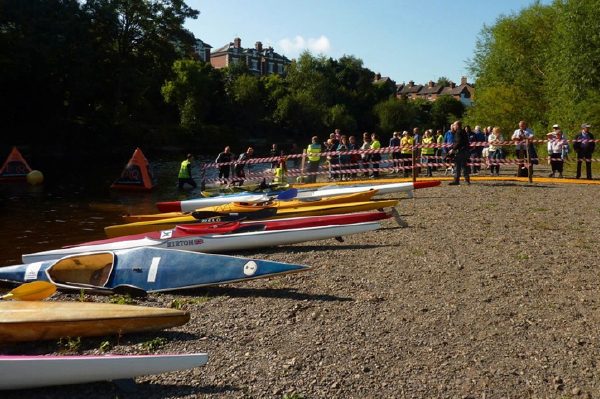 As long as the kayak is serviceable and novices wear a buoyancy aid, pretty much anything goes! Drafting (or wash-hanging in kayak parlance) is permitted and capsizing is optional.

The kayak section is either an out and back segment, or laps – this gives a great opportunity to see where the competition is!  The kayaks are usually lined up on the beach or grass with paddles at the ready.  Once out of the swim transition having got rid of the wetsuits, the competitors run and pick up their kayaks (donning buoyancy aids if required) and launch themselves into the water, paddling off as quickly as possible.

When they  finish the kayak section, there are usually helpers who will grab the kayaks from the competitors once they are back on land to make for a quick dash into the second transition to the bike.

Bike:  Most of the bike sections are on roads and vary in distance between 23k – 36k. There are a couple of races that are off-road where cyclo-cross or MTBs are used. British Triathlon rules apply to all racing, i.e. helmets are compulsory and no cycling in transition is permitted.

Run: The run follows the British Triathlon format and distances vary from 5k to 10k. Some are rather tough off-road coastal runs – just what you need after three other disciplines!

Some of the races are technically demanding, whilst others are beginner friendly as the aim of BQA is to cater for everyone.  With the rising demand for adventure racing and where three disciplines are not enough, many people are finding the attraction of the four sporting disciplines too much to resist.

The BQA is actively promoting and supporting these interests and they run a website and a Facebook group.  So what are you waiting for?  Come and have a go!

4 intensity swim levels you should include in your freestyle training

How long should you leave between racing two Ironmans?