Whether you want some winter sun, a pre-season pick up or a mid-season boost, heading abroad to train can elevate your tri performance to the next level. But where’s best for triathlon training? We weigh up the Azores, Gran Canaria, Lanzarote, Mallorca and Tenerife

If you want a training destination to yourself and some of Europe’s greatest and most varied scenery, then the subtropical Azores should be top of your list. Quite simply, it’s a magical gem of a place, one that recalls the lushness of Hawaii, New Zealand or Ireland around any given bend, but has a unique charm of its own.

We spent five days on the main island of Sao Miguel in 2018 and based ourselves in the low-key, pretty cobbled capital of Ponta Delgada. The sea was a touch chilly (bring a wetsuit), but the riding and trail running were spectacular throughout the lush landscapes and dormant volcanoes. High points included the iconic dual-lakes of Site Cidades and the Lagoa de Fogo, and we had the roads to ourselves throughout (sharing the tarmac more with cows than automobiles and other cyclists).

Weather: The Azores can’t compare to the Canary Islands below in terms of guaranteed sunshine and you’ll likely see some rain in the highlands, but expect highs of 16°C in February and 21°C in November.

Tri camps and facilities: Nothing as yet. We stayed at the affordable and modern Lince hotel, which had smallish indoor and outdoor pools.

Best beach for swimming: You can swim in thermal pools, lakes and spas in the Azores, but if you just want sea and (black) sand then Milicias Beach is walkable from the capital.

Bike hire: We rented from Rent a Bike Azores, but it’s a little out of town and very hard to find, so another Ponta Delgada option is CC-Specialized.

Best ride: The ride from Ponta Delgada to Sites Cidades is special, but we actually preferred the hairpin-riven route from Ribiera Grande to the lake of Lagoa de Fogo. One of the continent’s greatest, most under-the-radar, cycling routes.

Want to race? The Azores Triathlon takes place in May.

We raced Challenge Gran Canaria in April 2018 and foolishly kept it as a destination on our weather app, and the thermometer has rarely ventured from a daily high of 25°C. But there’s more to Gran Canaria than its near-perfect weather, with crescent bay beaches for swimming, a mountainous interior for riding and coastline-hugging run routes.

Weather: Almost perfect in the south, with little rain and average temperatures of 21°C in the winter months. Like Tenerife, the north is cooler and wetter.

Tri camps and facilities: Nothing to compare to La Santa in Lanza, but the Piscina San Fernando offers two 25m pools in Maspalomas and is in close proximity to the nearby sand dunes for some hardcore beach running. The host hotel of Challenge GC, the Gloria Palace Royal, boasts a stunning infinity pool and one of the world’s great buffets.

Want to race? April’s Challenge-Mogan Gran Canaria attracts both elites and age-groupers to the island for this tough early season middle-distance test. 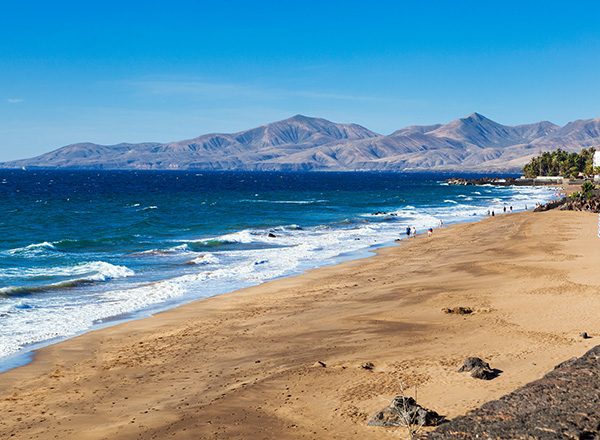 With possibly triathlon’s most famous resort, Club la Santa, and the epic Ironman Lanzarote both located here, Lanza has long been a honeypot for triathletes throughout the off-season and beyond. So while it lacks the under-the-radar feel of the Azores, the tri facilities are incomparable.

Weather: Prepare for average highs of 20°C in February/23°C in November (and just two days of rain per month), but also ready yourself for Lanzarote’s infamous winds.

Tri camps and facilities: Club la Santa is the obvious pick but is often block booked, so you can also try Tri Sports Lanzarote and the Occidental Lanzarote.

Best beach for swimming: There’s the lagoon at La Santa, but we’d go for Puerto Del Carmen, home of the Ironman.

Bike hire: The above facilities offer bike hire, or you can try Free Motion in Puerto del Carmen

Best ride: The 180km Ironman Lanzarote bike leg is hard to beat for seeing all what the island has to offer, taking in Teguise and the Miradors of de Haria and del Rio along the way. Again, prepare yourself for winds.

The largest island of the Balearics has established itself as a cycling Mecca. While you certainly won’t be riding alone here, the draw of the mountain routes and warm weather are hard to ignore. But it’s not just cycling that’s established a foothold on the island, with a host of multisport races and tri facilities luring triathletes to Mallorca throughout the year.

Weather: February and March temperatures in Mallorca hit the high teens, but also can drop into the low single digits and it’s not uncommon to see snow in the mountains. The sea temperature is also low until May.

UK flights: It’d probably be easier to list which UK airports don’t fly to Palma. And out of season prices can be incredibly cheap. Tri camps and facilities The BEST Swim Centre in Colònia de Sant Jordi has a 50m pool and great run trails nearby. It’s also the home of the BEST Fest swim event in May and close to one of the island’s greatest beaches (see below).

Tenerife is dominated by Teide, the highest mountain in all of Spain and the world’s third biggest volcano, and it’s fast become one of cycling’s most popular destinations, with the benefits of training at altitude luring Team Sky here (as well as Javier Gomez) for winter training camps. But is it any cop for triathletes? Hell and yes is our answer after a week here in January 2019.

Teide was our highlight for its blend of hairpins, Utah-esque landscapes and smooth open roads, but the dense woodlands of the isolated Anaga Mountains of the north also offered some spellbinding riding and trail running opportunities (in admittedly inhospitable weather conditions) and the beach of Playa de las Teresitas was hard to fault for January open-water swimming.

Weather: Teide also dictates the weather in Tenerife, with the reliably warm southern half of the island regularly 5°C warmer than the wetter north. Expect around 20-25°C in February and 18-23°C in November.

UK flights: Exhaustive and too many to list here. We flew with EasyJet from Bristol.

Tri camps and facilities: T3 Tenerife Top Training in La Caleta has welcomed Alistair Brownlee in the past, and offers a running track, two outdoor pools (one of which is 50m), as well as close proximity to the beach.

Best beach for swimming: There are plenty of picks in the south for sea swimming, but for us the crescent bay of Playa de las Teresitas, San Andres, in the north is hard to beat.

Best rides: The TF-21 from Viraflor to Teide is spectacular, but it’s the TF-24 route from San Cristóbal de La Laguna into the Teide National Park that stole our riding heart. The moment when we finally climbed higher than the clouds at the Mirador de Chimague to see Teide in all its glory will go down as one of our greatest two-wheel moments. A word of warning, however. Those clouds and climbs are brutal, so prepare your legs for punishment and your kit bag (waterproof jackets, gloves and plenty of liquids are needed) accordingly for dense fog, driving rain and blazing sunshine, and the demands of cycling at high altitude.

Want to race? Unlike some of its Canary neighbours, triathlons in Tenerife are few and far between. Santa Cruz/Ocean Lava Tenerife takes place in February and the long-standing Medano Triathlon runs in May.

How to pack up your bike for an overseas triathlon

How to prepare for racing in hot weather

12 weeks till triathlon race-day? Here’s how to prepare

What are the different triathlon distances?

How to improve your mental toughness