With people taking on ultra triathlons, extreme irons or swimming around the coast of Britain, it’s easy to forget just what a major, adrenaline-boosting step taking on that first triathlon is. Whatever happens along the way, it’ll be an event that won’t be forgotten, no matter how many PBs, Ironmans or age-group honours follow.

Here’s our digital editor,Debbie Graham, on her debut tri experience: “For years I let my poor swimming put me off taking part in a tri, fearing that everyone would laugh at my paltry breaststroke efforts. Instead I found that, once I finally took part in one, the sport is genuinely for everyone, whatever their ability. And also that triathletes are a friendly bunch and, while some do take it seriously, a lot are there to have fun.

So if you’re on the fence wondering whether to give it a go or not – do it. You won’t regret it and remember it’s okay to go at your own pace. Just be prepared to become hooked!” 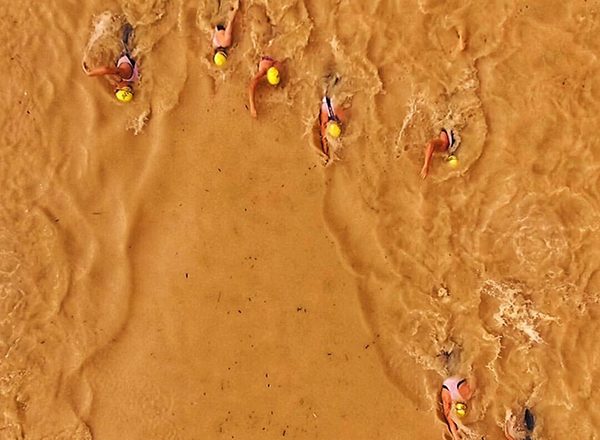 Submerged in a river at stupid o’clock. Bike and running in a flashy leotard. Tri can often seem odd to the general public at the best of times. But, from swimming in a muddy bog at the Julia Creek Tri in the Aussie outback (above) to being chased by devils at Savageman in Maryland, some triathlons take uniqueness to the next level.

Included in that list is the Craggy Island Tri, where you swim from the Scottish mainland to Kerrera before an off-road adventure. Over to pro Fraser Cartmell for his take on Craggy. “A beautiful sea swim followed by a challenging mountain bike ride around Kerrera is completed by a hill run with only a herd of Highland cattle as company… perfect!”

World’s best triathlons: 31 to do before you die

Whether it’s a lake, river or dock, the swim leg of a triathlon will dominate the pre-race nerves for many competitors. Throw in the unpredictability of a sea swim, however, and the tension can crank up to 11. Not to mention the reward and pure fun. Step forward Steve Baker, who raced Devon’s Croyde Ocean Triathlon in 2018, on why you should enter the deep blue in 2019. “The huge expanse of water means no clashes with other competitors and nothing beats seeing the sand as you swim; it’s the unpredictability of the conditions that makes it so appealing. Ocean swimming is a completely different discipline to pool swimming, there’s tides, waves and sighting – nothing beats it!” 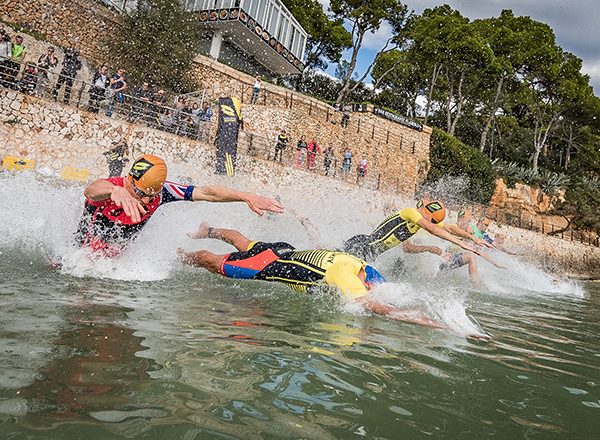 Triathlon may have become increasingly standardised in terms of its sprint, Olympic, middle and iron distances since the sport’s modern day birth in 1974 (there are claims that tri existed in 1920’s France), but there’s still plenty of innovation to be found across the multisport race calendar. Delve deeper and you can easily find multisport races with kayaks like the Rat Race Coast to Coast pictured here and, well, ones that rip up the triathlon rule book like the Super League Triathlon, with its mix of Eliminators, Time Trials and Equalizers. Enter Aaron Gouveia, who raced Super League Jersey in 2018. “I was a spectator in 2017 and watching the pros tear up the tight, intimate course was hugely inspirational. I knew I needed to get in on the action! And competing in the AG race in 2018 didn’t disappoint. The racing was organised as well as the professional races and the format was so enjoyable (and painful). The crowds were awesome and the competition brilliant.”

The sheer distances of Ironman can overwhelm athletes of all levels, but go and watch one and you’ll see that the field is far from just grizzled and lean racing machines, with an array of ages, shapes and sizes, and fitness abilities all present. After a decade of racing tri, 220’s Matt Baird faced his first iron in 2018 and survived to tell the tale. “The UK Ultimate Triathlon on the 3rd of June 2018 is a day I’ll never forget,” he says. “From the camaraderie between the athletes to the relentless support from the volunteers, the iron experience surpassed everything I’d hoped for and more. There can be few more satisfying moments in tri than crossing that iron finish line… even if the burger van had disappeared by the time I finished.”

12 things I learnt from my first Ironman-distance triathlon

Ironmans can start and finish in the dark, but what’s it like to begin an event at midnight? You can quell your wanderlust at August’s 113km Starman, set in Scotland’s Cairngorm Mountains. Here’s the course record holder, Chris Watson, on his experience. “With an intimidating yet rewarding night swim, a peaceful cycle and run set in a glorious mountain backdrop, this is a unique race experience. You can fully immerse with the delights of night time wildlife, have little worry of passing traffic before concluding the run to an ever-beautiful Cairngorm dawn.”

Duathlon. Tri without the scary bit, right? Not so, says our columnist Tim Heming. “If you think two disciplines are easier than three, then you’re in for a breath-sapping shock as the traditional run-bike-run of duathlon demands the cardio engine is revving from the get-go. The perfect curtain-raiser to your season, where British climes mean open-water swimming stays on ice, du –particularly the off-road variety – can be raced in bracing conditions. It’ll blow away the cobwebs, sharpen your competitive edge, and give you a fitness baseline.”

Sometimes a conventional Ironman just isn’t enough. Step forward the forever-gruelling Xtri World Tour featuring such long-distance classics as Celtman, Norseman and Patagonman, held in some of triathlon’s most inhospitable terrains. Here’s BBC Breakfast’s Louise Minchin on her Patagonman experience. “Before the race, the race organisers claimed Patagonman would be a life-changing experience and would create long-lasting memories. For me, it did both. It was brilliant, beautiful and brutal. And the race of a lifetime.”

Are these the 7 hardest triathlons in the world?

Progression in tri is often judged by moving up the distances, but there’s much reward to be found in returning to a race – whether that’s a super sprint or Ironman – and stomping over your previous time. Over to our columnist Martyn Brunt and his take on laying down that PB. “A couple of years ago I finished an Ironman a full hour faster than my previous Iron PB. I was so astonished I thought I’d either busted my Garmin or missed a lap off the run. But no! I’d really done it. I swaggered bare-chested around transition like a cocky scaffolder and had to physically restrain myself from shouting “THIS. IS. SPARTA!” That’s the power of smashing your PB. Try it!”

10. HEAD TO THE MOUNTAINS 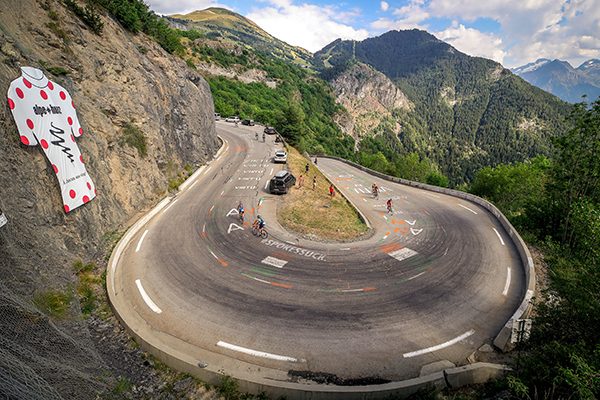 There are few things more fun than zipping down descents at speed. And few tougher than facing mile upon mile of vertical ascents. Throw these together with a lake swim surrounded by mountain peaks and a skyline run, and the appeal of racing in the mountains is as clear as the Alpine air. “Alpe d’Huez [above] is magical,” recalls Tim Don, the winner of Alpe’s short race in 2011. “The history of cycling is fantastic. It’s a long climb so you have to ride your own pace, because if you ride too hard you’ll pay for the last 5km of the climb or on the run. I wanted to test myself and a mountain triathlon is an amazing way to do that.”

Swimrun. The sport where amphibious beings run around islands dressed in wetsuits while tied together by bungee cords… If this is what comes to mind when you think of this fast-emerging form of multisport then you’d be right, but it’s so much more than that says 220’s editor Helen Webster.

“Swimrun appealed because I love the adrenaline rush of trying something new. My first event was ÖtillÖ Isles of Scilly and, with 30km of trail running and 7.5km of swimming split over around 17 stages, it was gruelling, make no mistake! See it as an adventure not a race, though, and you’ll soon marvel at the beautiful and wild nature these events are held in.”

Swimrun gear: what you need

There are few sports where non-professionals get to represent their country, but a major draw of triathlon is the opportunity to qualify for and then race around the world with your nation embossed across your tri-suit. And it
feels brilliant, says 220’s Jack Sexty.

“International age-group racing is a unique experience in triathlon. There’s great camaraderie in Team GB and competing against the best amateur triathletes in the world has inspired me to improve. Even if you only do it
once, I’d highly recommend putting a championship event on your bucket list.”

Mud. Beautiful scenery. A course free from motorised traffic. And more mud. While the Xterra trail triathlon series sadly hasn’t established itself in the UK, it doesn’t mean that off-road multisport isn’t a blast, and there are UK alternatives in both triathlon and duathlon the length of the nation. Here’s Paul Bromhead – who raced Scotland’s off-road Aviemore Triathlon in 2018 – on why you should venture off road in 2019. “The scenery is amazing and the different terrains prove a challenge, from fireroads to single track, technical bike areas and tree roots waiting to bite you in the bum if you make a mistake. I can’t wait until my next one!”

14. RACE IN A NEW DESTINATION

Forget air-conditioned buses, cabs and hire cars. The best way to experience the sights of a destination you’ve never been to before is to swim, bike and run around it. “From swimming in the mighty Tennessee River to cycling on Beijing’s highways and running along La Croisette in Cannes, tri has taken me out of my comfort zone and to many destinations I’d never considered before,” says 220’s Matt Baird. “The contrasting climate, international flavour and the sense of being somewhere you never imagined are all enough to send the adrenaline surging in even the most jaded of UK triathletes… and the water will almost always be warmer.”

In 2017, we named the Lake District’s TriathlonX as the hardest iron-distance race in the world. Yet the race organisers think the 5,000m of climbing wasn’t enough, and they’ve added another 2,500m of skyward ascent to that total for May’s eXtreme edition. Kate Morris finished TriathlonX in 2018 and has the eXtreme in her crosshairs for 2019. “Triathlon X is extraordinary and whatever this monster throws your way, it’ll be an experience you won’t forget. And you don’t have to be superhuman to complete it; myself and my friend Margo cried and cuddled our way through ours!”