Golden skies were an auspicious start for Gwen Jorgensen and the rest of Team USA at WTS Gold Coast today, and they made the most of it to take a clean sweep of the medals.

Jorgensen wore the number two today after the number one spot was left unoccupied in a fitting tribute to the late Aussie triathlete and coach Jackie Fairweather, who passed away in 2014. The golden bike rack was also left open to remember Fairweather..

Ideal conditions did little to break up the women on the two lap swim but a quick transition saw a tight-knit lead group of eight form at the front of the flat and very technical 40-kilometre bike course. 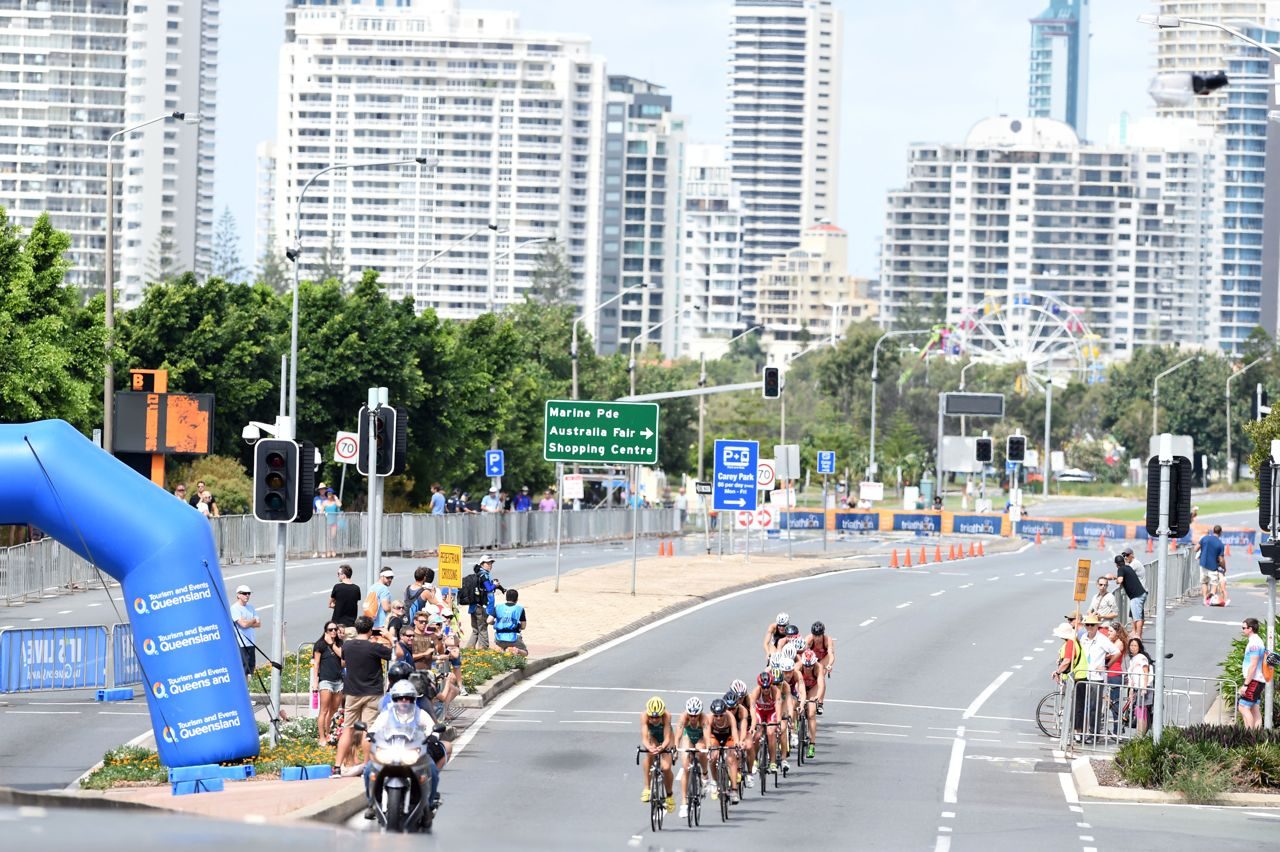 A large chase group, led interchangeably by Andrea Hewitt (NZL) and Australia’s Ashleigh Gentle and Emma Moffatt remained at a distance of about a one-minute deficit from the leaders entering into the second transition.

Jorgensen held her own in the swim remaining in touch and with the lead group heading back into into transition right behind Jessica Learmonth (GRB) who led out. Her swim and bike skills continue to improve which is not good news for her competitors.

Jorgensen played an active part in the front group with Duffy and True also driving the bunch that worked effectively together to ensure they stayed away throughout the entirety of the eight-lap technical course.

Her remarkable effort the first two disciplines set her up perfectly to then unleash her weapon on the run. She cruised across the finish line to earn the gold medal at 1:57:00. Despite having to serve a 15-second penalty for a transition infringement, Jorgensen still executed a standout run to keep her perfect 2015 season intact and win her third WTS race of the year.

I am so happy with my win at #WTSColdCoast today. What an amazing day for Team USA going 1-2-3 @sgroffy @KZaferes6 pic.twitter.com/ofSXeAJeTy

True took home the silver medal with a time of 1:58:18, giving her the first podium finish of the season after she placed ninth in Abu Dhabi and eighth in Auckland. The USA sweep was complete when Zaferes was able to grab third in a time of 1:58:36. The bronze medallist now has earned three for three on podium finishes in the WTS circuit for the year and shows no signs of slowing down anytime soon.

“I don’t think you ever have a perfect race but I was certainly thrilled to come out of the water and be in the front pack right away,” said Jorgensen afterwards. “I mean one, two, three for Team USA, I don’t think you can get any better standing on the podium and looking over and seeing the other two girls and hearing the national anthem, we could not ask for anything more,” said Jorgensen.

What did you think of today’s race? Let us know in the comments below!