As part of our 25th birthday celebrations, we caught up with six-time Ironman World Champ Mark Allen, arguably the greatest athlete of 220’s lifetime, to talk about the evolution of tri, Iron War and 110-year-old shaman Indians…

220: What do you rank as your greatest achievement of 220’s lifetime?

Allen: One was winning the first ITU World Championship in the Olympic distance in Avignon. It was such an honour to be crowned the champion at a distance that I was much less famous for being able to race, and to be the winner of the event in France where I had had so many great races during my career.

How do view your Nice Triathlon experiences now?

I raced the event 10 times. I won it 10 times. In many ways that’s more amazing to me than winning six times in Hawaii. I had some really tough races there. The most difficult was my penultimate victory when Yves Cordier was over 7mins ahead at T2. By the turn around of the run I’d only made up about 2mins. It wasn’t happening. Yves was going to win. So I just told myself that if I continued to run like a triathlete I would lose, but if I tried running like a runner I might have a chance. So what I did was to just surge for as long as I could take it, as if I was going 1km repeats on the track. It took me until the sign that said 400m to the finish before I was able to get close to him. Then I passed him with just meters to go in the race.

Which of your Hawaii titles do you cherish the most?

That would be my first Ironman victory in 1989 and my final one in 1995. The first was so incredible because of the great duel with Dave Scott. We raced together the entire day, neither of us wanting to give up an inch or a second. It eventually became clear that the key was going to be the final uphill on the marathon before you drop back down into the town of Kona and run the final mile or so to the finish. But Dave was the strongest and at the half marathon point I was ready to just give up. I’d been there six times before and never won, and now it was looking like Dave would continue is string of victories and I would be 0-7.

But then I recalled the image of a 110-year-old Huichol Indian shaman that I’d seen in a magazine before the race. His name was Don José Matsuwa. He was from Mexico. He and his adopted grandson were featured on one page in the magazine and they both had a look on their faces that was very peaceful, but very powerful. Just seeing Don José’s face again as I was running brought me that same feeling. And suddenly, I was just happy to be racing side-by-side with the best guy in the world! From that step forward I knew I could do it! But I still had to be patient. Then, on that last uphill, I made the decisive surge that caught Dave by surprise and went on to win my first of six titles by a mere 58secs over one of the greatest competitors our sport has ever spawned.

You had another epic showdown with Thomas Hellreigel in 1995.

Here was a guy who was 13 years younger than me, and very hungry for victory in Kona. He amassed a 13:30 lead off the bike. That meant I had to make up 30secs per mile every single mile of the marathon if I was going to catch him. It seemed impossible. No one had ever closed that big of a gap to be the champ. No one had ever one at age 37 at that point in the history of the race. There was no template, no guidebook telling me how to pull it off.

I had to just trust that the race was unfolding exactly as it should, even though it was nothing like what I had hoped my ideal final chapter would look like. But in the end, I did catch Hellreigel. I did win that sixth victory. And personally it turned out to be the greatest race of my career because of how difficult it was to become the champion one final time. 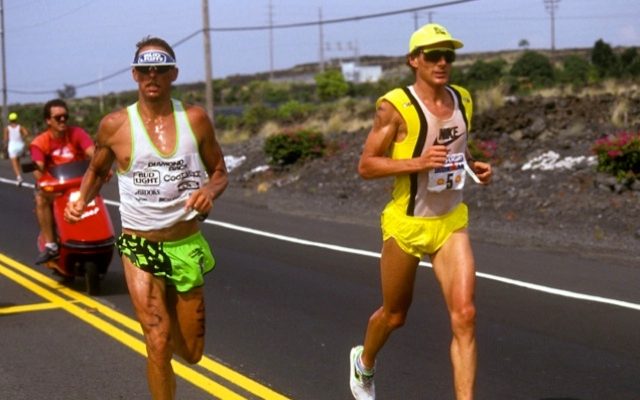 Who would be your own triathlon heroes since ’89?

The pro fields are filled with great performances from the Brownlees to Craig Alexander and Chrissie Wellington and of course Mirinda Carfrae. But my I have to say my personal hero is Harriet Anderson who finished the Ironman last year just shy of midnight as a 78-year old. That is the stuff of heroes!

What for you have been the major changes in the sport since ’89?

The biggest change has been the expansion of the sport. There are so many more events to race now than when I competed. The options for athletes are incredible. The second thing would be the specialization of the top people. Today you are either a short distance or a long distance triathlete. When I competed you were expected to not only race both extremes but to be world class at both. I don’t think that expectation is there now. Then finally a third big change is the access to coaching and guidance for all athletes. When I raced [pictured above with Dave Scott at Hawaii 1989] there were no triathlon coaches. Now there are many who can help athletes achieve their goals and sidestep a lot of the pitfalls in training that we made early in my career because it was such uncharted territory and no one really knew the best methods for combining all three sports together.

And what major changes would you like to see triathlon make in its next 25 years?

The one change that I’d like to see is to have a cohesive Olympic-distance series for all athletes. Of course there are the ITU events, but those are not really for the age groupers. Early in my career there was the USTS series with stops in a lot of major markets within the US. It was something everyone looked forward to racing. I think that’s missing right now. If an Olympic-distance series of races could take hold it would expand the sparkle and magic of triathlons to a whole new group of people who are for whatever reason not going to bite into the full-distance triathlon pie. It’s more manageable to get ready for a 2-3hr race than one that can take up to 17hrs to complete.

For more on Mark Allen head to issue 300 of 220, out on Tuesday 27 May. The digital edition can be picked up via the iTunes store, Google Play and Zinio.