Challenge Roth began well for the British with Harry Wiltshire leading out of the opening 3.8km swim in 47:24mins.

Despite banging shoulders with Henry Beck of Germany, the former Olympic-distance athlete from Leeds led the field into the first transition of the German long-distance event famed for its fast course and fanatic crowds.

Cannon fire and hot-air balloons were still filling the early morning skies above the swimmers in the Donau-Kanal as Wiltshire pedalled out on to the rolling, high-speed Roth roads. Unfortunately the Brit was unable hold the pace to needed to remain at the front. But few people could, as this year’s race saw a new record bike split set by Andrew Starykowicz.

Well and truly popped from the front bike group, those boys were shifting. I’m going to employ the cliche and sum it up with “learnt lots”

The American blasted round the course churning a 55-tooth chainring to post 4:09:13 for the 180km bike leg – bettering the previous record set by Andreas Raelert in 2011 by more than two minutes.

One of the few people that was just about able to live with the red-hot pace being set by Starykowicz was the German Nils Frommhold. His bike split was only 27secs slower than the American’s, and would have been good enough to be the new benchmark itself were it not for Starykowicz.

While the men were rewriting the record books, the women were also tearing through the German countryside and parting the seas of spectators crowded on the Solarer Berg climb and packed into the village of Obermassing. 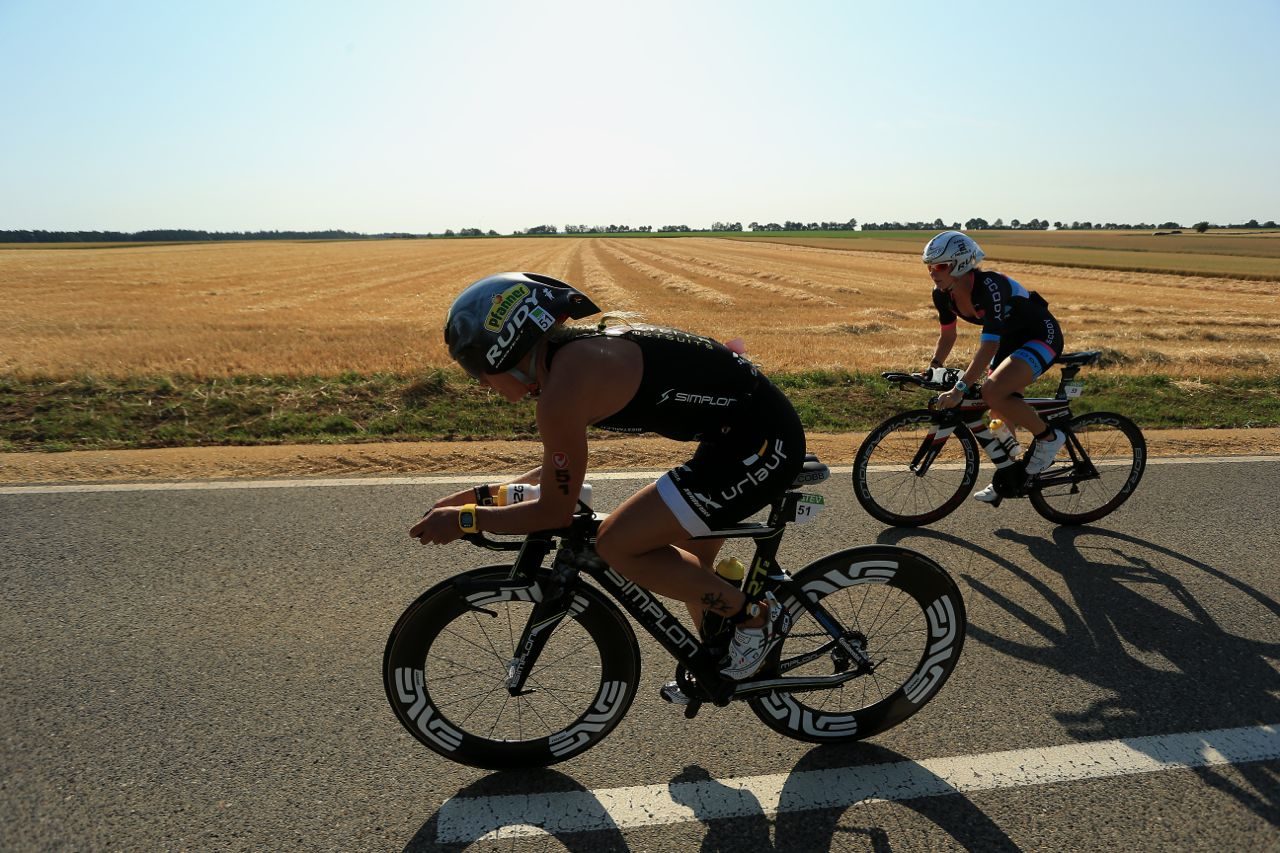 Although America’s Laura Bennett had led out of the water, a trio of women – ‘the flying Dutchwoman’ and previous Roth winner Yvanne Van Vlerken, Aussie Carrie Lester and, to the joy of the fans, local girl Anja Beranek – made their way through the top 10 to take up and trade the first three positions on the road. Van Vlerken had the fastest bike split of 4:47:34 but her two closest pursers were both within 30secs of her time.

In the men’s race, the red-hot bike pace took its toll on Starykowicz, and he dropped back during the run, eventually finishing 26th. Frommhold, however, was managing to hold on to the lead despite the runners behind him making up some of the ground they’d lost during the cycling, most notably Germany’s 39-year-old previous Roth winner Timo Bracht and a last-minute Roth entrant David Dellow of Australia.

Frommhold had almost 12mins’ advantage on Bracht going into the marathon. The 27-year-old lost more than half of it during the final 42.2km and was clearly suffering as he made his way through the final metres.

As he approached the stadium to take the tape and, with it, his victory, he seemed almost confused by the crowds leaning over the barriers to high-five and cheer him home.

He stopped the clock at the line in 7:51:28 and a little more than five minutes later, Bracht did the same having eased up slightly after realising the gap to Frommhold couldn’t be closed in the remaining distance.

Dellow meanwhile had to up his pace after hearing via his girlfriend Caroline Steffen and her coach Chris McCormack that he could go under 8hrs if he hurried. Dellow did just that and squeaked home in 7:59:28. 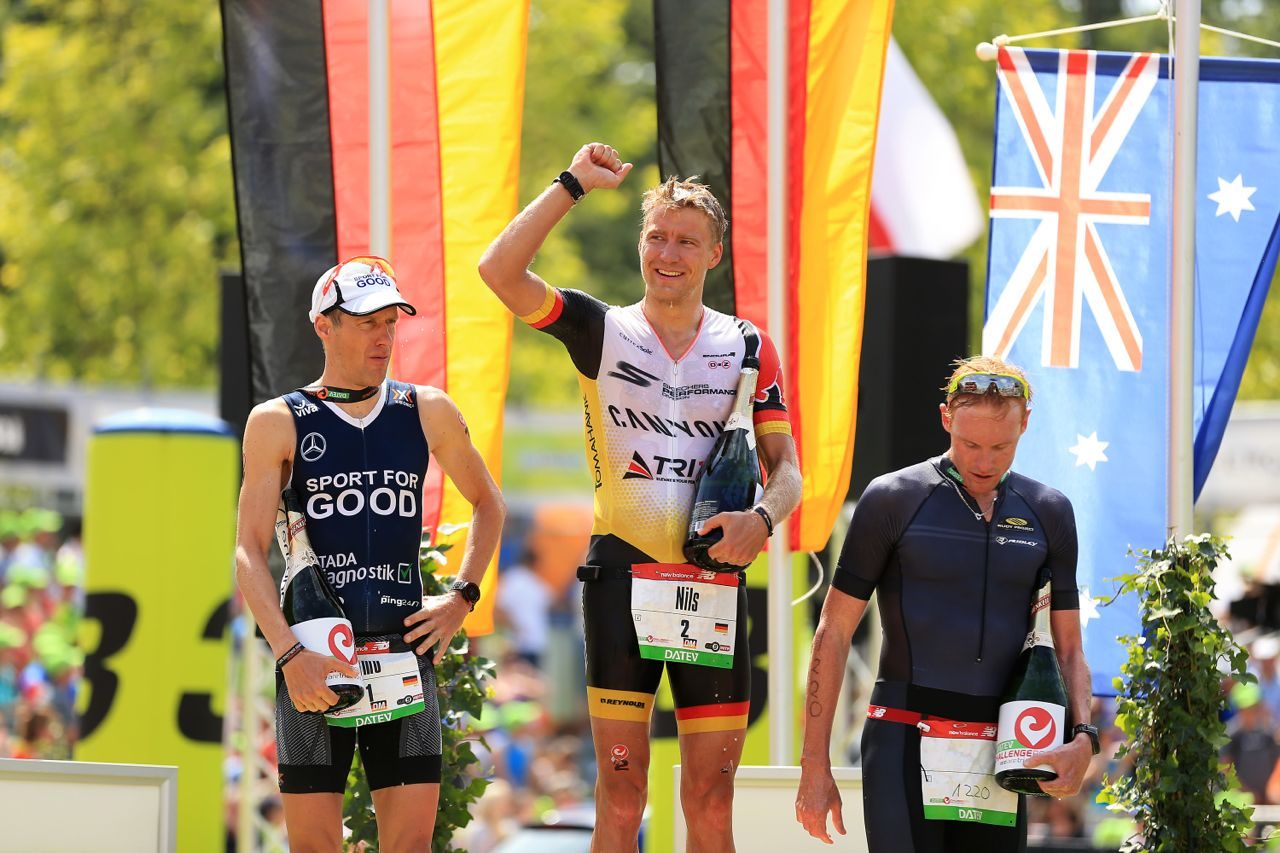 Less than an hour later the women’s podium would be decided, and while a place on the 2015 men’s podium required a sub-8hr time, a place on the women’s would need an equally impressive sub-9hr time. Van Vlerken took the top step, to gain her third Roth crown, with 8:50: 53, while Lester (8:53:09) and Beranek (8:55:19) followed her home in second and third.

Local hero Beranek was especially happy with her time – a new personal best that also won her the German long-distance championship title – as she had crashed out of last year’s race on the bike leg. “I didn’t think about last year when I was out there. I just thought about all the experiences I had when I was growing up and training here, which are all such good memories.

“My strategy was to try and get away on the bike because I needed to get away from the fast runners but I didn’t have the best legs today and I couldn’t open up as big a gap as I needed… But overall it was a good performance and I’m very happy with it.” 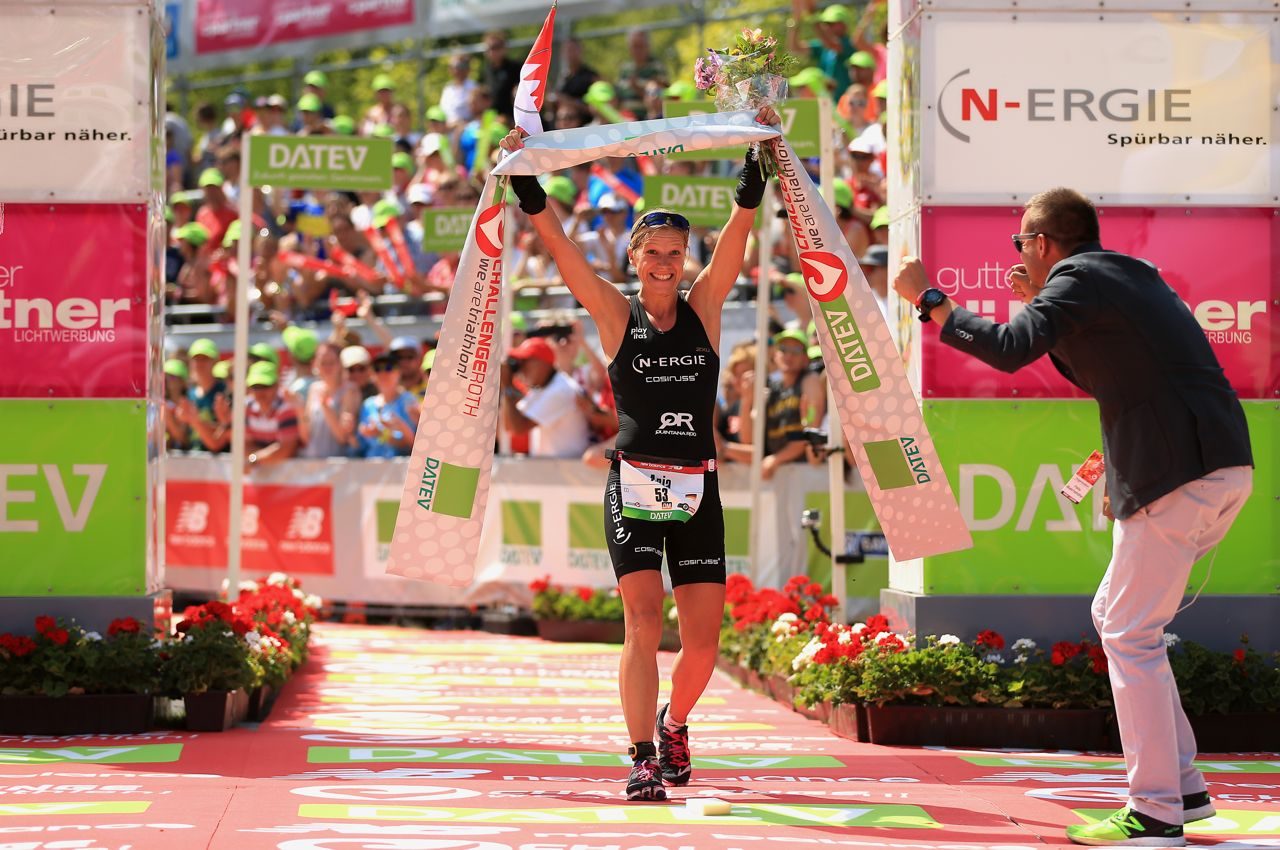 Anja Beranek crosses the line in just under 9hrs

Van Vlerken, who had thought her race might be ruined after a seemingly severe reaction to an insect bite earlier in the week, was just glad to take the win. “My energy was just gone by kilometre 32 on the run. But the spectators on the course were amazing – they really pushed me through. Every time I started to walk they would shout, “No! You can’t walk” So I had to start running again. It was very hard… I suffered out there but when you win you don’t feel it anymore.”

She wasn’t the only victor to suffer. Men’s winner Frommhold also had to toil harder than he’d hoped in the closing stages. “My bike performance was pretty strong and that was why I suffered on the run quite a lot. From about the 12km mark I had to start taking some short walking breaks and I wasn’t really able to enjoy the last 3km and take in the support of the spectators… It might take a few days for what I did here to sink in but I’m very proud of what happened today.”

Second-placed Bracht was pleased to show there’s still life in him yet. “All the stories this weekend have been about ‘Timo Bracht is turning 40 in days’ time, he’s an old man’. But it’s not bad going under 8hrs. I said I will end my career with my best race performance and today I was 30secs too slow so I need anther year of training before I can think about stopping.”

Australia’s David Dellow on the bike at Challenge Roth

It had not only been an eventful day for third-place finisher Dellow, as the Australian’s last seven days had been filled with drama. “I was racing in Ironman Frankfurt last weekend and punctured on the bike. So that was disappointing.

“But the next day at breakfast my friends said, ‘well why not try Roth?’ So we got on the phone and the guys here were kind enough to give me a slot and that puncture turned out to be a blessing in disguise.”

Were you racing in Roth? Let us know in the comments below!

Harry Wiltshire: a man with a Kona gameplan

More Challenge Roth 2015 spots up for grabs – get tweeting!

Kona 2014: how the British pros got on in Hawaii