How much time does a triathlon bike save?

A triathlon bike could make a difference to your run by as much as 51 seconds over 5km, say experts

Not convinced a triathlon bike is for you? It might be time to think again and whip out that credit card. Researchers from Central Lancashire University recently examined the effect of bicycle geometry on subsequent running performance in a sprint triathlon, and discovered that those pedalling on triathlon bikes recorded a faster overall bike-run time than when cycling on a road bike.

Doctor Howard Hurst, senior lecturer in exercise physiology, and colleague Catherine Jones took 10 male and trained triathletes and had them complete two 20km cycling time trials on a cycle ergometer, one with a seat-tube angle measuring 73°, the other with a rather extreme 81°. In both cases, a 5km treadmill run followed the bike. As well as individual bike and run times, the researchers also measured performance-related variables like heart rate, oxygen consumption, power output and rate of perceived exertion.

And the results? “No significant differences were found during the cycling phase between the two conditions for any of the recorded variables,” commented the authors. “However, 5km running performance was significantly faster with a steeper 81° seat-tube angle compared to the 73° angle.”

Specifically, the subjects’ average 5km time registered 27:10mins compared to 27:59mins, resulting in an overall cycle-run time of 64:23mins on the steeper set-up versus 63:31mins – an impressive 52secs saving.

While the authors conceded that improvement partly stemmed from familiarity – several subjects were used to triathlon bikes – the change in biomechanics was also cited. Why derives from a number of physiological reasons, including: increase plantarflexion and reduced range of knee motion on the bike, leading to greater stride length on the run; reduced hamstring activation on a triathlon bike and so conserving energy for the run; and less calf use on the bike, again saving energy for the run.

Hurst and Jones also observed that after riding on the 81° frame, the subjects reached peak running velocity faster than on the 73° frame, which is particularly important in a sprint-distance tri where the run comes in at just 5km.

But the authors also warned that you won’t enjoy these run benefits by simply hopping onto a tri bike. Unless you’re blessed with the flexibility of a contortionist, a period of physical and mental acclimatisation’s required to master the different geometry of a tri bike. Gradually increasing time spent on your new tri bike or clip-on adorned road bike is the most proficient and everlasting method to faster tri-bike riding – and significantly faster running.

Your first triathlon bike – a guide

Though not cheap, a triathlon bike results in tangible improvements, especially when it comes to the run.

If a triathlon bike’s an extravagance you can ill-afford, you can pick up a pair of clip-on bars from £30, which will open up your lower limbs in readiness for the run.

How to turn your road bike into a triathlon bike

We’d recommend a professional bike fit to maximise your riding, whether on a road bike or triathlon bike. Not only will a respected practitioner steer you into your optimum position for more speed, they’ll reduce the chances of picking up an injury, too. 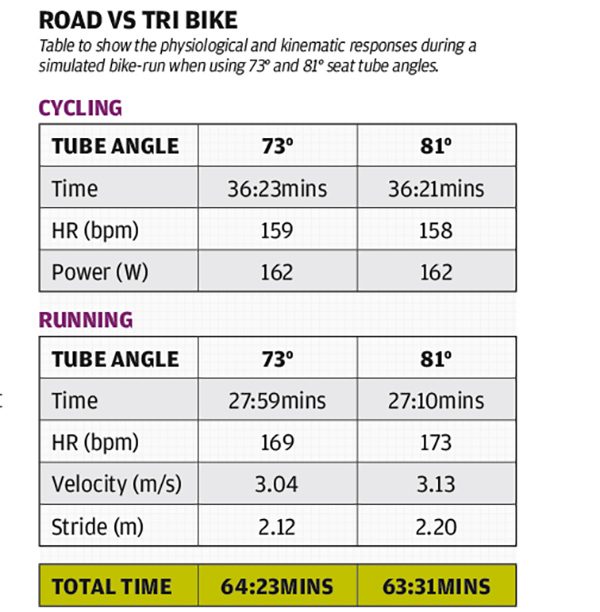 Found this useful? The try…

Is a road bike or triathlon bike best for a hilly Ironman?

Do you need a triathlon bike for 70.3 and Ironman races?