Incorporating drills into your swim sessions is key to correcting all manner of ‘mistakes’ made in the freestyle stroke. Here are our top three common technique problems and their solutions…

Our experience tells us that there are three common aspects of the front crawl stroke holding many triathletes back. We’ve provided a simple drill to help develop each, which you should incorporate into the session skeleton. Note: a key thing to remember with respect to any drill or technique work is that if you find a drill that you really struggle with, chances are you’ve hit on an area of your stroke that is actually holding you back. Don’t skip over it – be patient and persistent and work to improve it. This will really help with your general stroke efficiency.

1. HOLDING ONTO YOUR BREATH

their breath underneath the water simply for fear of running out of air or because they’ve been taught that breath-holding improves buoyancy – it does, but in all the wrong places. A key factor holding many triathletes back, at any level of ability, is low-sinking legs. You’ll know if this is you or not if you swim much better with a pull buoy and/or with a wetsuit than without. By holding onto your breath underwater, you’re inadvertently increasing buoyancy in the chest region, which will sink the legs further. Coupled with this, breath holding will essentially turn what should be a very aerobic (steady) effort into something very much more anaerobic (hard). You wouldn’t hold onto your breath when you ride your bike or go for a run, so nor should you when you swim. 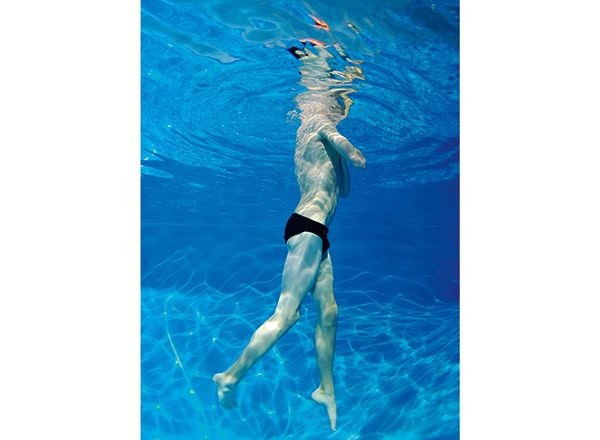 Try sighing deeply in the water or humming through your nostrils and place greater emphasis on how much you exhale rather than how much you gasp to inhale. Breathing and body position/balance will become much easier as a result. Try this sink down drill to help…

At the deep end of the pool, tread water. When you’re ready, take a breath in and let yourself sink. As soon as your head is in the water, start exhaling strongly through either your nose or mouth, whichever you prefer. Make sure you’re exhaling straight away. If you’re not exhaling immediately, or are not exhaling strongly enough, you won’t sink – or you’ll sink a bit but then surface again.

The idea is to be able to sink straight down to the bottom of the pool and stay there exhaling until you’re ready to push off the bottom and ascend. Find your ‘sinking threshold’ and practise exhaling strongly until you can get down easily and quickly.

Are you surprised how strongly you have to exhale to sink? This shows you’re not exhaling strongly enough in your normal stroke technique. Getting accustomed to the water and feeling happy sinking in this alien environment will greatly help your swimming technique.

Remind yourself to exhale into the water by making it part of your push-off routine. Every time you push off from the wall, exhale strongly. Then carry on doing it for the whole length.

Novice swimmers: if you’re a little nervous in the water, start in the shallow end and simply crouch to get your head under the water. Get used to this before you gradually get into deeper water.

2. CROSSOVER IN FRONT OF HEAD 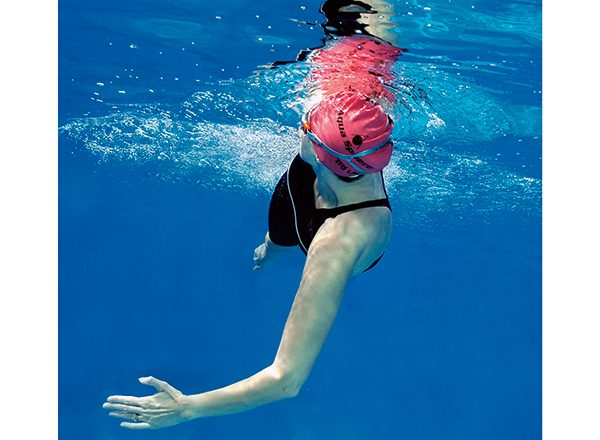 Crossing over in front of the head upon hand entry can cause numerous problems to arise within the stroke and is also enemy number one for many subsequent errors.

First and foremost, crossovers cause the body to weave off course, which for open-water swimming has huge implications for how straight you can swim and how much extra time you spend in the water. We’ve seen some triathletes add up to 20% to their race distance by weaving off course due to a crossover hand entry.

Crossovers also cause a loss of balance within the stroke, which can cause a triathlete to over-rotate and subsequently require the legs to scissor-kick apart to stabilise, which then adds tremendous drag. Crossovers
can also lead to shoulder pain and impingement (especially if coupled with a thumb-first entry which is often the case), which will ultimately derail your best-made training plans.

Furthermore, crossovers will also have a negative effect on the propulsive phase of the freestyle stroke. Crossovers are always more pronounced when breathing, and this is often an after-effect of poor breathing technique and the loss of focus (and sight) on the lead arm as you gasp for air. 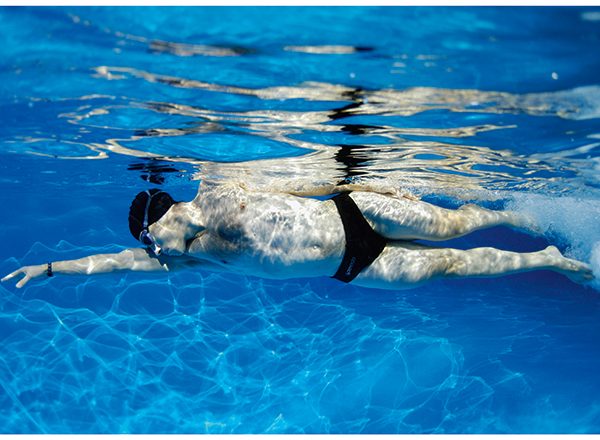 To correct a crossover the simplest drill to work on this is the side kick, preferably with a pair of fins to give support and a touch of propulsion to allow you to focus on what the lead arm is doing. The key to making this drill effective is when lying on your side with the left arm extended, and breathing whenever you need to to your right, to ensure you think about drawing your shoulder blades together and back, which will improve your postural position (think proud: shoulder back and chest forwards) and straighten you up.

Try this for 25m on each side for several rounds and see how straight you can keep yourself, always returning the head to an eyes-down position to help you judge how straight you are by using the black line below as a reference point. Now try 25m kicking on your side with the left arm extended (breathing right), and then 25m normal freestyle, breathing every four strokes only to the right hand side.

Each time you breathe, ensure the focus is on the lead arm extending forwards down the pool, middle finger first, and not veering across the centre-line. Repeat this on the other side and see which side you’re best at. Do you tend to veer off course in the open water to the same side that you’re struggling with on this drill (for example, left arm out, breathing right and a habit of drifting right in the open water)? If so, this exercise will really help.

How to improve your ‘catch and pull’ phase in front crawl 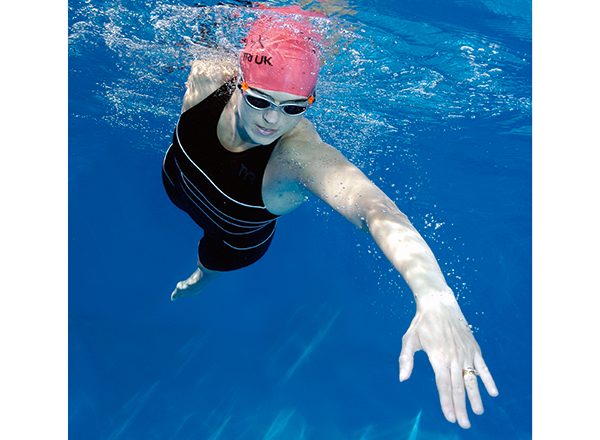 Lifting your head high through desperation for air, a crossover hand entry, and muscling your way through the water with your shoulders are all things that will sacrifice a good catch and pull through. First and foremost, if you address the two points covered already you’ll find that you’re setting up for a more effective catch just through being more relaxed and by being in a more effective biomechanical position to move yourself forwards.

When stretching forwards to extend and lengthen out the stroke, the classic thing to see someone doing incorrectly underneath the water is to inadvertently drop the wrist and elbow into a saucer-like position, apply the brakes with the lead hand against the flow of the water relative to the body and then push down with a straight arm rather than pressing back with a bent (high) elbow.

If the hand presents itself forwards, the build-up of water pressure on the palm can easily be misinterpreted as the sort of ‘good’ resistance you’re supposed to gain when you get that elusive ‘feel for the water’. As such, trying to correct for this can be tricky initially as the change will feel quite strange.

Ensure that as you’re stretching forwards upon hand entry, the fingertips stay angled just below the wrist and the wrist just below the elbow. Reach to a slightly deeper point than you’re probably used to. There’s no need to actively shorten the stroke (though this is what it can sometimes feel like to those who’ve emphasised an overly long stroke in the past), but this change in starting point for your initial catch will ensure that the elbow stays relatively high during the catch phase. From here, bend the elbow to about 100° to 120° and focus on the sensation of pressing water back behind you rather than down (which will sink your legs further) or away, which will decelerate your stroke rate and ultimately your rhythm and speed.

The analogy of ‘reaching over a barrel’ comes from this notion of utilising the palm and forearm as your paddle, while maintaining a high elbow forward in front of your head. This is quite an advanced skill, though, and will take some time to develop. 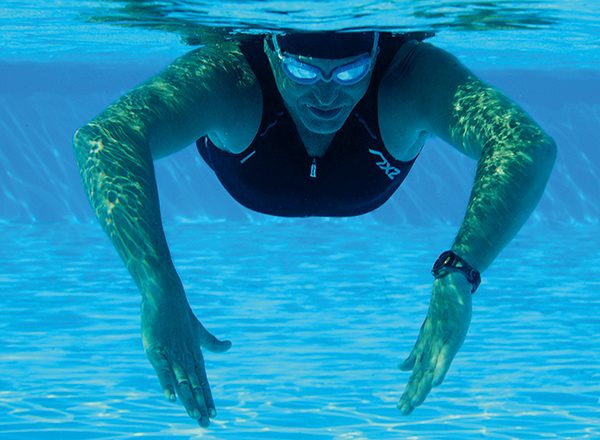 A key drill sequence for working on this is sculling and doggy paddle, aiming to do 12.5m of each and then translating the sensation of improved catch straight into the freestyle stroke for 25m. To practise this, use a pull buoy to float your legs behind you and avoid the temptation to use the leg kick to aid propulsion, as you need to see if you can move forwards just through the positioning of your arms. Using a gentle sculling motion, scull your hands in and out, trying to fix your elbows in an elevated position above the wrists and wrists above the fingertips. You’ll move very slowly forwards initially – if you stall or go backwards, chances are your elbows are sinking and you will be presenting your palms forwards; try taking the fingertips a little deeper, keep you elbows higher and feel your legs rise a little higher. An ultra-buoyant pull buoy can be a real bonus here for those with sinking legs.

After 12.5m put your head down and perform a long doggy-paddle action using your arms to pull yourself along as if you were pulling yourself along a rope. As you reach forward think about stretching forwards with a roll of the hips and shoulders as you would when you stretch out in your normal stroke. Watch your hands underneath your body; ensure that your hands stay underneath their respective shoulder; and don’t pull wide or sweep across the centre-line. After 12.5m go into 25m of normal freestyle simply with the view of feeling the water a little better than before.

Found this useful? Then try:

9 open-water swim problems and how to put them right