Ironman training: how to maximise the build phase

What happens during the 63 days of the build phase has a greater influence on your Ironman race performance than any other time in your preparation says Joe Friel. Here he explains how to make the most of this time

You need to start about 12 weeks before race day and end three weeks prior. In periodisation-speak this is called the build period. What happens during these 63 days has a greater influence on race performance than any other time in your preparation.

It’s assumed that on build day one you report in with well-developed general fitness; your swim, bike and run skills are well-honed; and you have good aerobic endurance in all three sports. The following are the seven predictors of success I try to achieve with the athletes I coach during these critical 63 days…

There are many important long workouts in the nine build weeks covering the swim, bike and run. Of these, the most important and the best predictor of success is your long ride. About half of your Iron-race will be spent on the bike; that alone makes it the most important workout. And the more fit you become for the bike, the more you can hold back, still produce a fast split and be left with fresh enough legs for a good run.

These long rides should be done mostly at goal race intensity. This could be based on heart rate or power, although I prefer power. The key here is not duration but rather the ability to maintain a high goal power output. These five long rides should be 5-6hrs each. At the end of each, run for 15mins.

These should be 2.5-3hrs each. There are only four scheduled because this is the workout most likely to result in an overuse injury. Plus running longer than three hours won’t make you appreciably more fit but will greatly increase your risk of injury.

If you are forced to do both the long runs and the long rides on the weekend, then do the run on Saturday and bike on Sunday – running on tired legs increases your risk of injury.

These long runs should be at goal race intensity or slightly faster. You’re not trying to build your capacity for running fast, but rather to increase your aerobic endurance pace. If you get faster at a zone-2 heart rate, you’ll probably run very well on race day.

To make your long runs more race-like, do them after a 60-90min ride including a lot of zone 3 effort.

Do seven long swims of 3km each – the majority at goal race-pace – including intervals of 500m or more. The best predictor of how you’ll do on race day is how well you can maintain goal pace on these swims, especially the last one.

If you’re a front-row starter who intends to go out fast on race day, be sure to include such pacing in the first interval each time, so that you become accustomed to it. 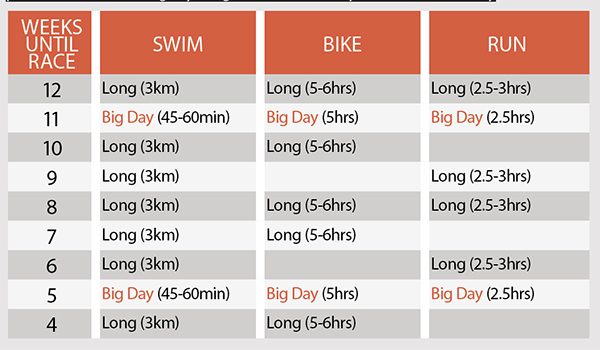 The Build Period Long Workouts box above suggests two ‘big days’ – one at 11 weeks before race day and the other five weeks out.

By the end of each of these big days you’ll have done a workout of about 8.5hrs and learnt a lot about how you’re coming along for the race.

Schedule in these long workouts starting 12 weeks prior to your race, and your performance in them will give you a good indication how you’ll fare come race day

On the long rides and runs you should be experimenting with race nutrition. Too many athletes leave this until the last minute, making poor decisions based on little experience, and DNF because they got their nutrition wrong.

Athletes who train consistently during this nine-week period do much better on race day than those who miss a lot of workouts. To be successful you can’t have injuries, illness, overtraining, motivational loss or interruptions for any other reasons. For nine weeks you must be focused and consistent.

Long-course athletes who have a race plan do better than those who don’t, and the best plan is a written one. There are a lot of variables during an Ironman that you’ll have little or no control over, but dialling in the above predictors of good performance will greatly increase your chances of having a successful race.

For more on Joe Friel’s training methods go to joefrielsblog.com

Tapering: why it’s important and what you should do the week before your triathlon

How to race your first Ironman

Triathlon Training Plans for every distance and ability