Featuring politics, doping and some mighty egos, here are five famous athletic clashes from the history of Ironman in Hawaii

Erin Baker’s belated debut at the Ironman World Championships in Hawaii came in October 1987. It followed lobbying from the race organisers to remove her American travel ban after the combative Kiwi athlete had been convicted of throwing explosive devices while protesting at the South African rugby team’s tour of New Zealand in 1981.

While Kona history has been littered with heavyweight clashes – Dave Scott and Mark Allen, Chris McCormack and Normann Stadler – the Newby-Fraser/Baker rival had another level, with Newby-Fraser’s formative years spent in South Africa witnessing her become an object of Baker’s political fire.

“She dehumanised me. To her, I just represented the South African government. She knew I grew up in South Africa and thus I took the brunt of all her political stance against the government. I became the scapegoat,” Newby-Fraser told the American journalist Timothy Carlson in 2010.

In the tightest battle for podium places that the event had witnessed, Baker fought off previous winners Sylviane Puntous and Paula Newby-Fraser deep on the run to become the first athlete from Down Under to win the Hawaii crown, smashing Newby-Fraser’s course record by 14mins in the process.

The result saw Newby-Fraser devote even more attention to the sport and in 1988 she would finish 11th… overall, blitzing Baker by over 11mins to smash the women’s course record by 25mins in 9:01:01.

As entertaining as he is, Chris McCormack’s rivalries could fill the five spots of this feature alone, with Normann Stadler, Faris Al Sultan and Craig Alexander all experiencing the Australian’s mind games throughout their careers.

The former ITU star would dominate Challenge Roth at the beginning of the century with four straight victories in Bavaria, three of which were under the magical 8hr mark. Things at the Ironman World Championships in Hawaii weren’t so easy for McCormack, however, after arriving on a wave of hype (some of it his own making) in 2002 and failing to finish, placing 59th in 2003 and DNFing again in 2004.

Macca would go on to finish sixth in 2005 and second behind Normann Stadler in 2006. Stadler would make the mistake of criticising McCormack for drafting after the race, leading to a heated argument that very nearly turned physical at the post-race party and the creation of one of triathlon’s most passionate rivalries.

Read Macca’s I’m Here to Win book and it becomes clear that the self-confident stars had a genuine dislike for one another, with the pre-race verbal jabs at press conferences and in the media more akin to boxing than the more subdued rivalries of triathlon.

Stadler’s remarks would fuel McCormack’s training for 2007 and the Aussie would triumph in Hawaii… with Stadler suffering from food poisoning and suffering another very public exit by vomiting at the side of the road.

And Macca’s Germanic rivalry wasn’t just limited to Stadler, with Faris Al Sultan also in the Aussie’s crosshairs. The psychological mind games once got so bad that Macca claims Al Sultan’s mum emailed him to ask if he could lay off her son… 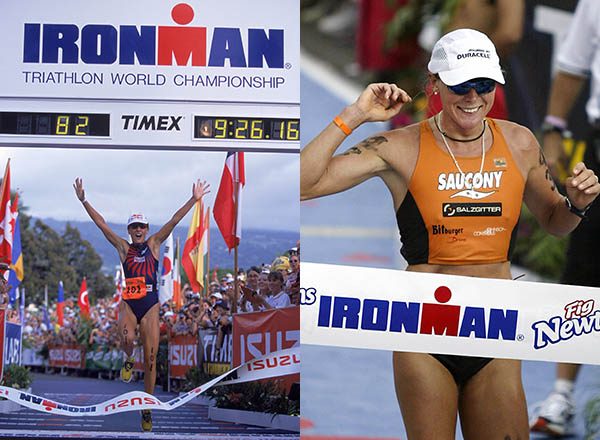 The dawn of the 21st Century saw Switzerland’s Natascha Badmann dominate Kona, winning a trio of victories from 2000 through to 2002. That winning run would be broken by Lori Bowden in 2003 before Badmann took another title in 2004.

The smiling Swiss wasn’t the first woman to cross the line that day, however, with the German athlete Nina Kraft having the famous Hawaii lei placed over her shoulders before Badmann crossed the line. A month after Kraft had been edgy at an infamous post-race conference, she was found guilty of EPO use and stripped of the title. The 2004 Hawaii title would now be Badmann’s, but the victory had been marred, leaving a bitter feeling for the usually irrepressible Swiss.

The Hawaii spectators were also deprived of seeing the famous spectacle of Badmann’s celebratory victory dance down Ali’i Drive. “The most hurting was not getting flowers,” Badmann has said. “Some people look at it and say, ‘C’mon, she got her paycheck.’ That’s not what I race for. That’s never what I raced for. Coming down Ali’i Drive, this is the paycheck.” Badmann, long a vocal critic of doping in sport, still won’t utter Kraft’s name.

Badmann won again in 2005, and claimed her Hawaiian lei

Mark Allen and Julie Moss, Greg and Sian Welch, Mirinda Carfrae and Tim O’Donnell… Hawaii history is full of Iron couples. None, however, have come so close to winning the Kona title in the same year as the Canadians Peter Reid and Lori Bowden. The problem for the pair in 2003 was that their marriage had ended a week before Kona race day.

“Every time I saw her on the course I was mad,” Reid told ESPN after the race. “There was no way she was going to win and I wasn’t.”

The unhappy ex-couple would produce the winning goods on race day, with Reid taking his last of three titles, Bowden her final victory of two. The race organisers even had to rearrange the awards ceremony so the athletes wouldn’t appear together on the podium.

They’re the two titans of Ironman triathlon who have done more than any men to further the cause of 226km triathlon. Both are six-time winners of the Ironman World Championships, both partook in the greatest race in the sport’s history, both are Californian…

And yet, sporting feats and geographical upbringings aside, Mark Allen and Dave Scott are markedly different characters, the chalk and cheese of Ironman racing. Where the laid back Allen would embrace more spiritual approaches to life and triathlon, Scott was the scientist of triathlon, experimenting with nutrition and analysing the physiological conditions of racing Ironman.

Where Allen trained in the heartland of triathlon in San Diego (often with fellow Big Four members Scott Tinley and Scott Molina, Scott deliberately ploughed a solitary training path, invariably training alone in Davis, Northern California. While Allen famously used a 110-year-old shaman for inspiration during the Iron War, Scott was a man who raced angry.

While there was always healthy respect between the two Ironman colossuses, the rivalry came to a head in 1987 with some pre-race sparring in the media that continued throughout the race, with Allen tapping Scott’s heels on the swim. After 25km of the marathon, Allen had created a 4:30min lead before hitting the wall, succumbing to walking pace by 38km when Scott passed him on the other side of a TV truck.

Allen finished second and would require medical treatment post-race after internally bleeding during the run. Kona is 1988 was a year to forget for Allen (two punctures) and Scott (knee injury), with final Big Four member Scott Molina taking the title. The stage was set for a titanic battle in 1989.

Once again, there was plenty of tension between the athletes in the pre-race press conferences. And the pair were pretty much inseparable for the duration with Allen reprising his tactic of letting Scott know he was right there on the swim with the occasional hand-on-foot reminder.

At 35km, Scott started to succumb to Allen’s metronomic pace. By 40km, he was being tailed off as Allen made his move for home. With an American flag in hand, Allen crossed the line for his first Hawaii win in the astounding time of 8:09:15.

Competitor magazine’s Bob Babbitt soon christened the race Iron War, entire books were devoted to the showdown and the protagonists are routinely being asked about it 30 years later.

The top 15 Kona greats of all time

Male triathletes: the 10 greatest ever

Protein: Do your needs change as you get older?

Swim leg: How to start and finish strongly

How to build a solid cycling base in three easy steps