A triathlete asked me some time ago what he should do on downhill portions of an Ironman bike course. Should he pedal hard, pedal easy or coast? It was a great question and one that gets to the heart of proper pacing on a bike. The answer will help you to race faster no matter what your race distance is, but for iron-distance it’s critical to success. You simply can’t afford to make a pacing mistake in long-course events.

What should your body position be when cycling uphill?

Cycling: how to ride downhill fast and safely

The answer to his question has to do with drag – or how much wind resistance you encounter as the bike goes faster or slower. It doesn’t apply to running as your run speed isn’t significant enough to cause substantial drag. And, of course, there are no hills in a swim. This doesn’t mean that pacing isn’t critical to running and swimming, too. It is – just in a different way.

The starting point for pacing on the bike is knowing your intended intensity on the ride. Incorrect pacing is the single greatest cause of poor performance in an Ironman. Athletes almost always start the bike leg too fast and consequently, much faster than they can maintain for 112 miles. I know of athletes who have set their 40km personal best times in the first 25 miles of an Ironman bike leg – and you can guess what happened after that. What a shame it is to have done all that hard work in training only to blow it by racing without a plan.

Your plan also has to be realistic and measurable. Realistic means you know you can do it because you’ve rehearsed it successfully in training. Measurable involves having something to gauge intensity other than perceived exertion, which is almost always wrong at the start. The best way of measuring is with a power meter, but a heart rate monitor will do if you really understand how to use it. That involves knowing what causes heart rate to be high in various situations, such as when you are excited, and knowing how to adjust your pacing for it.

Speed is often thought to be the least precise due to wind and hills, but it can actually be helpful in other ways, which I’ll explain. On a bike, as your speed increases linearly (a straight line from, say, 20-25mph), the power required to go faster increases exponentially. This is primarily due to drag or air resistance. So while going from 20-25mph is only a 25% increase in speed, there is around a doubling of the energy required to achieve that additional 5mph. This is because, as speed increases, you must use more energy to sustain that speed, plus the additional energy to overcome an increased headwind.

Why am I telling you this? Because as you go downhill and your speed increases, you might be tempted to go even faster than coasting allows. Sadly, the energy expense of the additional miles per hour is going to cost you dearly. If you try to go really fast by pedalling hard downhill, you’re going to dip very deeply into your precious carbohydrate stores, while causing an increase of hydrogen ions and resulting acidity in your blood. Doing that repeatedly will soon catch up with you. You’ll eventually be forced to slow down as a result of wasted energy and acid-bathed muscles. A wasted race.

The bottom line for pacing has to do with an old adage, which says that if you’re riding on a fast portion of a course (downhill), ride easy – but if you’re riding on a slow portion of a course (uphill), ride hard. So when riding fast on a downhill, don’t expend as much energy as when riding uphill. Hold back on your power output when going fast. The longer the event, the more important this is. You can go much harder downhill in a sprint-distance tri than in an Ironman. 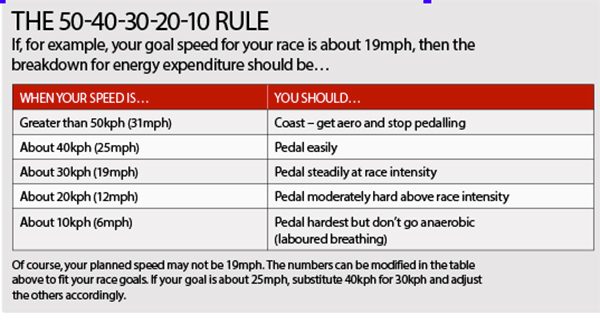 But the real key to success here is rehearsal. You’ve got to make proper pacing habitual. Make it a common way for you to ride. Every time you go for a bike ride incorporate the basic concept – ride slightly harder uphill, easier downhill and coast when you are going faster than 30mph, or whatever your cruising speed is. You’ll conserve energy and produce faster bike splits as a result.

How to cycle in a headwind

How to cycle past a horse and rider safely

What are the benefits of spinning at a high cadence on a bike?

How to build a solid cycling base in three easy steps