Wrapping up a massive weekend of triathlon in Nottingham, athletes at this year’s Outlaw Half were beset by lots of rain and some brutal headwinds on Sunday (31 May).

Karl Alexander completed the 1900m swim, 90km bike ride and 21.1km run in 4:15:19 to win by less than two minutes. Suzie Richards convincingly won the women’s event despite it being her first attempt at a middle distance triathlon.

Alexander, who is based in High Wycombe, finished third last year, but leapfrogged his rivals, Ian Turner and Paul Hawkins, to win the race this year.

He said: “Today was very tough. The head wind in places was brutal which meant you were working really hard. But it’s a great atmosphere here.

“Even on a day like today when the weather wasn’t great, people’s spirits were high and you just have to look around the lake to see that everyone is still up for it and enjoying it.” He added that he will definitely be back for the iron-distance Outlaw in July, and the half again next year.

Defending winner and course record holder Paul Hawkins was the early leader, but was disappointed to have to withdraw after the first lap of the run. He will also be back for the Outlaw Triathlon on 26 July.

The women’s event was dominated by Leeds-based Suzie Richards. She said: “Stepping up the distance was hard and completely different. I had to keep a lid on it at the start and on the bike because compared to the short races you feel like you’re going really slow, when really you’ve got a long way to go.” 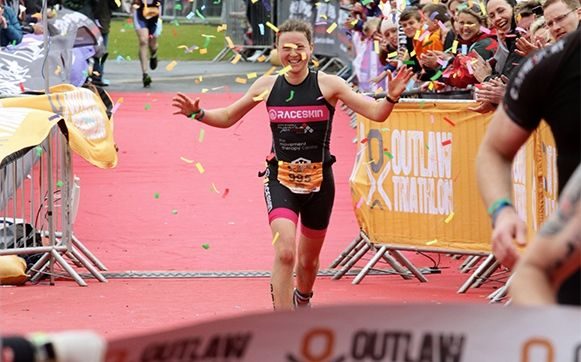 Suzie Richards takes a convincing win at the Outlaw Half 2015

“I’m surprised with my time, particularly when I was on the bike,” said Fell afterwards. “I’d like to try to get under five hours on another half, but the full would just be another ball game!

I did it! Finished/survived my 1st ever #triathlon @OutlawTriathlon 70.3 still smiling despite the gross weather☔️

Hawkins and Faux win Outlaw Half