From the off, Richard Varga went out in the swim determined to thin out the field as much as possible, and he opened up a really impressive gap considering that he only had 750m to do so. He was followed out of the water by France’s Aurelien Raphael and Dmitriy Polyanskiy, the elder of the Russian brothers. The trio had 25secs on the large group that followed them.

The three headed out of transition with that lead, but it wasn’t long before they were caught by a group driven by Alistair Brownlee, who was showing some real early intent on the bike. The two groups amalgamated into a lead group of about 16 riders, including Javier Gomez, both Brownlee brothers, Vincent Luis, Aaron Royle, Ryan Fisher and Polyanskiy. The big losers early on were Richard Murray and Mario Mola who’d both slipped into the second group, about 14secs behind and with the lead group riding at around 47km/h, it was going to be a hard gap to close.

The first lap was frenetic, with the lead group strung out in a line and Alistair acting as protagonist keeping the pace high at the front. He gapped the group by a few metres a couple of times, daring them to chase and making it even hard for the pursuing group. However, the gap did finally begin to close during the second lap and although a few athletes did attempt to push things off the front the chasers made contact early on the fourth and final bike lap, making a group of around 40 athletes that all came into T2 together. 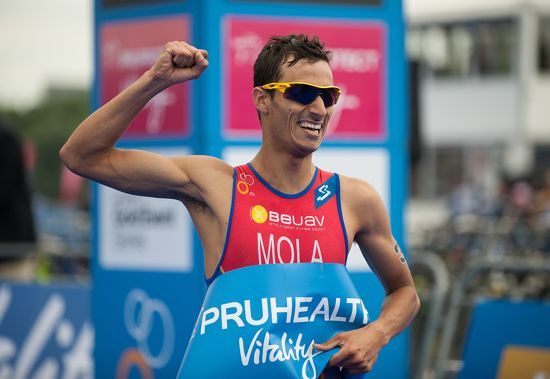 Out on the run it took literally a matter of a few kilometres to string the field right out and leave a very select group of eight athletes at the front: Alistair and Jonny Brownlee, Mario Mola, Richard Murray, Ryan Bailie, Joao Silva and Joao Pereira. Despite looking quite uncomfortable and with a serious grimace on his face, Alistair came to the front and raised the pace, making the others follow. But Murray and Mola simply sat behind him in second and third, looking ominously comfortable. Gomez took up position at the back of the group. One surge from Alistair shed Silva off the back of the group, and at the final turnaround, and Gomez lost a few metres which he painstakingly made up, but looked unable to move further forward.

It wasn’t until the final 800m that the others made their moves. Alistair was on the front, but Murray came past him and raised the stakes further, and as Alistair appeared to stumble and lose a few vital metres, Pereira came past too. Into the finish chute and Murray still looked in pole position for the win, but Mario Mola had played the game to perfection, coming past with 40m left to claim a fantastic victory.

At the finish, Alistair admitted that he would almost certainly sit out the rest of the ITU season now, saying: “To be honest, I don’t think I’ll bother with the World Series at all, I won’t bother going to Chicago.

“My ankle’s good, there are no problems. Everything’s good, which is a blessing to be honest.”