There were plenty of strong performances from Britain’s elites at the ETU European Championships in Geneva, with Lucy Hall and Tom Bishop placing fifth in their respective races, while Ben Dijkstra claimed bronze in his junior men’s race.

Commonwealth champ Jodie Stimpson finally returned to competition after an achilles injury, and was perfectly placed on the bike alongside Olympic gold and silver medal winners Nicola Spirig (SUI) and Lisa Norden (SWE), until a tyre flat forced Stimpson to stop for a wheel change. She eventually finished ninth.

Britain’s Lucy Hall and Jessica Learmonth were already up the road having led out of the swim. Early into the run Spirig took the lead and ran away to victory. Lucy Hall held on for fifth and Stimpson finished ninth.

In the men’s race, French athlete David Hauss managed to finish first ahead of Sven Riederer (SUI) and Kristian Blummenfelt (NOR). ITU World Champion Javier Gomez (ESP) suffered a similar misfortune to Stimpson and had to stop for a wheel change, eventually posting a DNF. Matt Sharp had a solid race, finishing ninth.

In the elite junior men’s event, Ben Dijkstra, Jimmy Kershaw and James Teagle all had strong races, at times dictating the pace on the bike from the front. Dijkstra, who is just 16 and racing against athletes up to three years older, was in contention right until the end, finishing third in a very tight sprint finish.

This is how close it was at the finish! @Ben_Dijkstra bronze #genève2015 pic.twitter.com/mZFrCLBW1u

“It was exciting to see the junior men riding off the front of the bike pack, and Ben getting a result at the end. There were some different tactics from Tom Bishop, which helped him to run well, and Lucy Hall demonstrated that the extra focus on her run is starting to pay off.

“It’s great to see Jodie back. She looked strong until the mechanical and although the result isn’t want she wanted, she got to practice a hard run off a hard bike, which helps set her up nicely.”

Patrick, who was guided by Hazel Smith, said: “We had a really good swim today. That’s where I’m making gains, but we had the fastest bike split, which I wasn’t getting last year so that shows how well Hazel and I are working together.

“It’s amazing to be British, world and European champion for now and Hazel was so happy to win a first major title. It is really helping both of us that we are able to train together. We just know what each other are doing.

Lauren Steadman led a British clean sweep of the podium in the PT4 category. Steadman, Faye McClelland and Clare Cunningham repeated their finishing order from last year’s ITU world championships and underlined their dominance in this category.

Steadman used her Paralympic swimming background to set herself up for another international gold medal, still at just 22 years old.

She said: “My swim was good, I found a rhythm. Overall it was really good, but I would like to improve on the bike a bit. I knew the other British girls would be hot on my heals, it’s great for Britain to get the top three, it’s great for the team.” 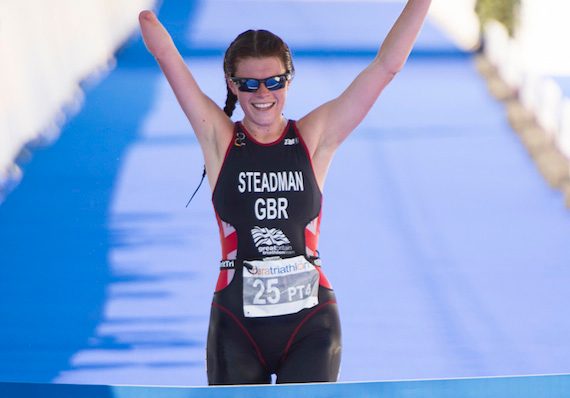 Like Patrick, Steadman is now British, European and world champion. She added: “I’m really happy to have all of the titles, but you’re never certain about what’s round the corner, you can never settle for where you are.”

Phil Hogg won Britain’s other medal, a silver in the PT1 (wheelchair) category. Andy Lewis demonstrated big improvements in the PT2 category to just miss out on bronze by 0.19secs.

Rounding off a successful weekend for the elites was the mixed relay races, with the GB senior team winning bronze and the junior team claiming seventh. 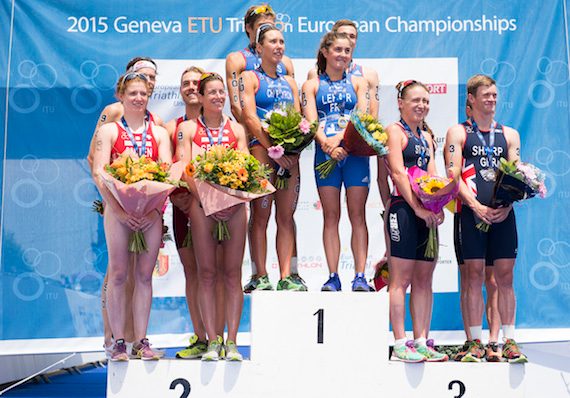 Jodie Stimpson, Matt Sharp, Lucy Hall and Tom Bishop were in contention right from the start over the super sprint distance course and battled with strong French and Swiss teams for the medals.

Can Ali Brownlee go sub-7 hours over an Iron-distance?

WTS Hamburg 2015 preview: Brownlees out, Stanford and Stimpson in

Top ITU women confess to nerves ahead of Challenge Bahrain