This article first appeared on www.bikeradar.com

Zipp has announced its most radical wheel to date, the 454 NSW, and after its impressive reworking of the NSW firecrest shape we were wondering just how Zipp could improve things further.

Bike race wheels: how to choose the right ones

Well the radical new shape of the 454 certainly shows that Zipp has been thinking way outside of the box. In fact it has been looking towards the sea.

Taking inspiration from nature, Zipp has been researching biomimicry — an emerging science that imitates the models and systems found in nature to help provide solutions to complex engineering problems. An example given by Michael Hall, Zipp’s chief advanced development engineer, would be trees being very much like a composite construction, with the wood and sap. Hall describes it as “very similar to a carbon wheel with resin and carbon fibre.”

However, the design inspiration for the 454 comes from a rather unlikely source, the humpback whale.

The research for the wheel shape looked at how despite a whale’s size it can swim at 23-24mph and turn in a five-foot radius swirling around to hunt. Hall says the humpback whale “basically has these Vortex generators on its fins that allows the water flow to stay attached, making it able to make these extreme manoeuvres.” 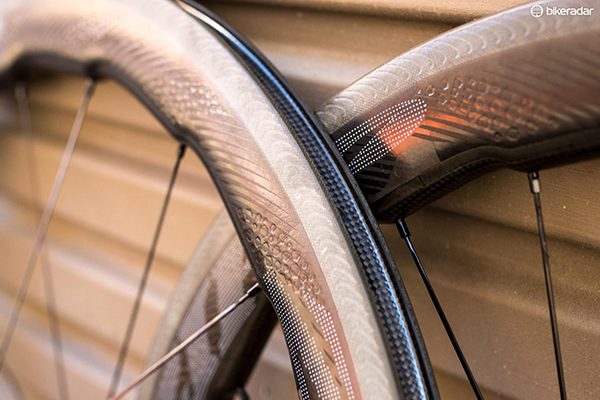 The undulating rim profile consists of raised Hyperfoils™. The 454 name is derived from the 5mm height difference between the rim’s 58mm highest and 53mm lowest points

The new NSW carbon clincher is a new addition to the NSW range but doesn’t replace existing models. The 454 refers to the wheels basis on a 404; so it has a 58mm deep rim, but the five refers to the 5mm difference you see with the sawtooth like shape of the inner rim, so the deepest part is 58mm and the shallowest is 53mm. Zipp calls this new shape the Sawtooth™.

Due to the shape of the 454 and the way it distributes vortex, the wheel rids itself of pressure much quicker than a standard rim shape

On the existing NSW there is a Sawtooth™ ABLC dimple pattern, but this new design has evolved this with Hyperfoils™, which are a special kind of vortex generator, or node, that replicates the movement of the whales described above. The dimples also have a hexagonal shape to them.

Zipp explains: “From a zero yaw angle [straight on wind] these [Hyperfoils] are unseen so it behaves just as a normal (404) rim would, as soon as you increase the yaw angle and you get more and more flowing over the rim you generate streamlined vortexes from the Hyperfoils™. You don’t want these vortexes to be too strong, when you generate turbulence you increase drag so the intention is to increase these vortexes and wind speed increases to stand a chance of separating the flow. With these Hyperfoils™ we are able to better control the Vortexes shedding and the size of the vortexes themselves.”

According to Zipp, under angles of between 5-15 degrees the 454 outperforms its competition by a factor of 15 percent. Now that would be a difference that you could really feel because it informs the stability through the bars.

Due to the shape of the 454 and the way it distributes vortex, the wheel rids itself of pressure much quicker than a standard rim shape, so even when wind has an effect it is much less pronounced. Hall describes this as “getting more frequent smaller dumps.” We’ll save judgement until we get to test ride the 454s, but they sound impressive.

The rim shapes are front, rear and direction specific, so won’t work as well if installed incorrectly. There is however a direction arrow to guide the installer.

A major benefit of Impress graphics is that they don’t interfere with the Hexfin dimples at all.

Aside from the radical rim shape, the 454 NSW carries over brake track. Zipp claims the molded-in sipes help clear debris and the silicon carbide treatment helps speed up the friction rate for greater stopping power in all conditions,

The wheels also feature ImPress graphics, which are printed directly onto the rim and conform to the dimples so the graphics have no effect on aerodynamics compared to stickers.

The 454s are laced using Sapim CX-Ray spokes and Cognition hubs. The rear wheels also use Axial Clutch™ technology, which is a freehub ratcheting mechanism that forgoes traditional pawls for a magnet activated freewheel — claimed to deliver half the mechanical drag of a conventional three pawl hub.

There is talk of bringing the new shape to disc and tubeless too, but for the time being this is what you’ll get from the 454 NSW:

A lot of time and research has gone into the new shape, and the complexity of the design means it takes 12 hours to construct a single pair (that’s significantly more than the standard Firecrest NSW’s) so it’s no surprise that these certainly aren’t cheap, with pricing confirmed at £3,500 / $4,000/ €4000 / AU$6099. If however they live up to the lengthy development and the claimed achievements this might just be the shape of things to come.

Included in the price is a pair of titanium skewers, Zipp valve extenders by Silca and a tube, rim tapes, wheel bags and Platinum Pro Evo brake pads.

Approaching two decades of testing bikes, Warren can be found on a daily basis riding and exploring the road and off roads of Wiltshire’s Salisbury Plain in the UK. That’s when he’s not travelling the world to test the latest kit, components and bikes.