We have two Americans to thank for the triathlon bike: Dan Empfield and Ray Browning. Empfield founded Quintana Roo in 1987 to build wetsuits specifically for triathletes. That same year the Scott DH aerobar began appearing on bikes at triathlons.

But although the DH bar offered an aerodynamic advantage, it came at a cost, as the Quintana Roo company history explains: “The problem was that it wasn’t very comfortable; the slack seat-tube angle and the fixed quill stems of the bikes of this time meant there was little room for adjustment. To achieve a good aero position, riders were bending over almost completely double.”

Empfield noticed that athletes using the DH bars would move their saddles forwards to get more comfortable and this got him thinking about altering the typical road bike frame geometry with its 73–78° seat-tube angle.

Meanwhile Browning, a successful triathlete studying for a PhD in biomechanics at UCLA, had found that riders could pedal harder by bringing their hips forwards to effectively steepen the seat-tube angle. He also believed that the more open hip angle such a position created would allow riders to run better after riding.

Empfield and Browning joined forces to put their theories to the test. Empfield built the QR Superform, with 650c wheels, aerobars and, more importantly, an 80° seat tube. Browning rode it at 1989’s Ironman New Zealand to see if this ‘tri-specific’ geometry worked. It did. He finished the bike leg 30mins ahead of two-time Ironman World Champion Scott Tinley and went on to win, breaking the course record in the process.

Thanks to advances in materials, design methods and our understanding of low-speed aerodynamics, triathlon bikes have continued to be refined since that initial outing in 1989. But, as Carl Matson, design engineer at Trek points out, their purpose remains the same: “Getting you to T2 as fast as possible while preserving your ability to run.” 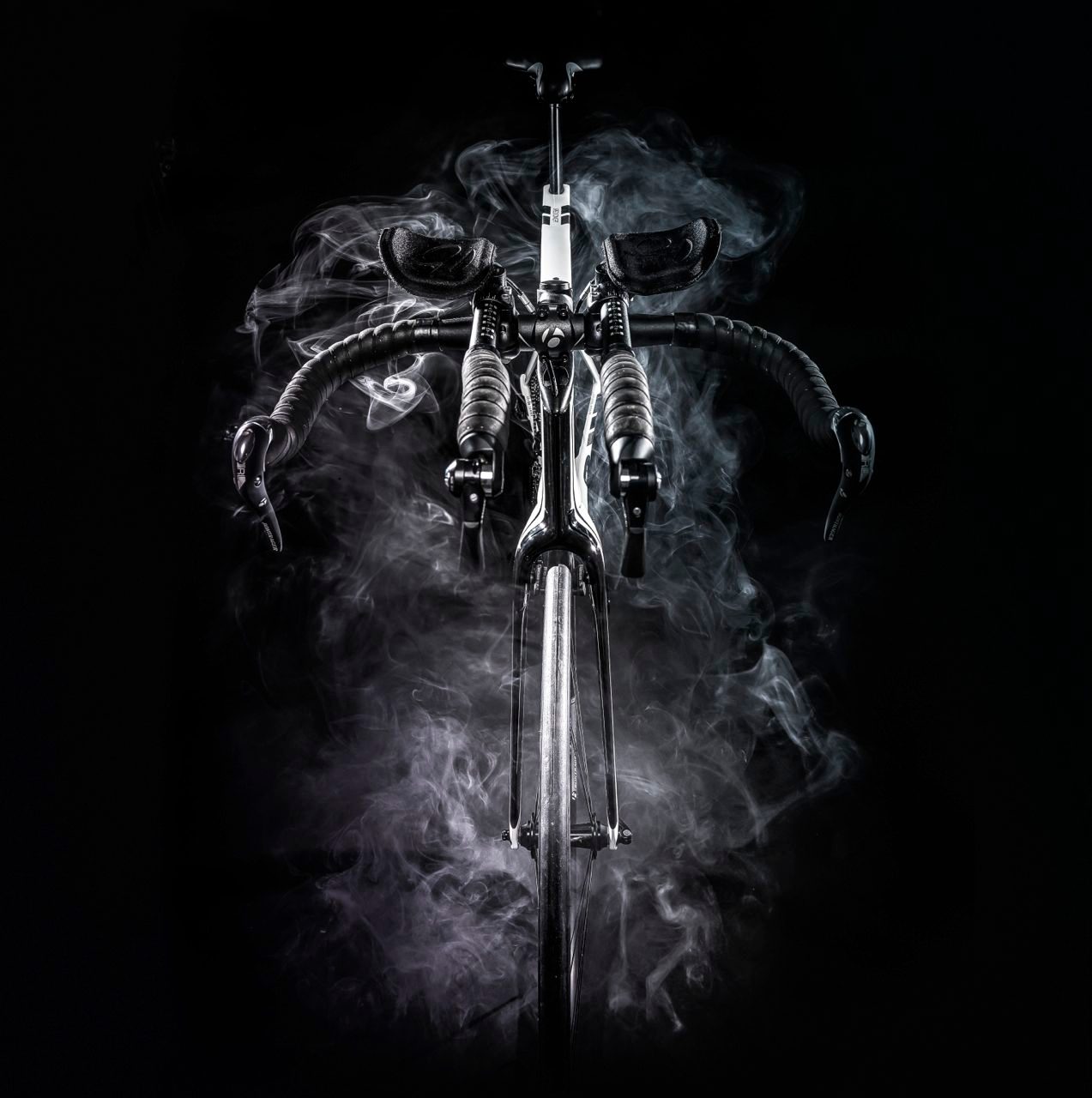 The traits of a triathlon bike

Certain characteristics are found on every tri bike, no matter what maker’s name appears on the frame…

Aerobars put you in a more aerodynamic riding position than conventional handlebars. While a road bike’s ‘drop’ bars may allow you to lower your head and flatten your back, aerobars also enable you to tuck your arms and elbows in. In this sort of aero tuck position you present a smaller, narrower profile to the air you’re trying to push out of the way.

Without being bogged down by the UCI rules governing tube dimensions that road race and time trial frames must adhere to, tri-specific bikes are free to use almost any size and shape of tube they like. 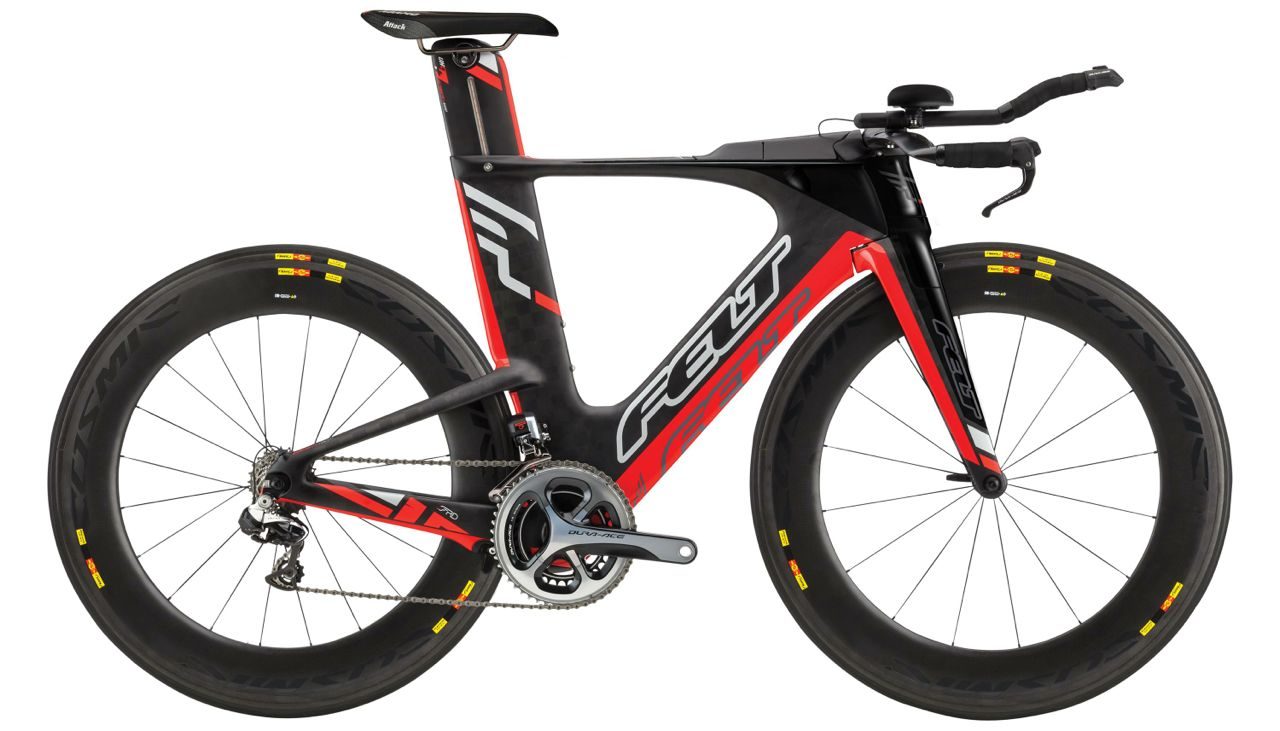 Hence the broader down tubes and head tubes with long trailing edges seen on the likes of the Felt IA and Specialized Shiv. More radical designs do away with certain tubes altogether, such as the seat tube-less Kestrel Airfoil Pro and Softride bikes, and, more recently, Quintana Roo’s Illicito that only uses a seatstay on the driveside.

The hallmark of a triathlon bike is a steep seat- tube angle. Whereas road bike seat tubes tend to sit on a spectrum between 72° and 75°, the seat tubes on tri bikes typically start at 75° and can go up beyond 80°.

The steeper angle moves the rider further forward, making it easier to ride in a tuck position on the aerobars, and opens their hip angle, allowing athletes to pedal harder.

Given that both their bike and bars put triathletes in a different riding position to other types of cyclists, the next logical component to consider tailoring to their needs is the saddle. 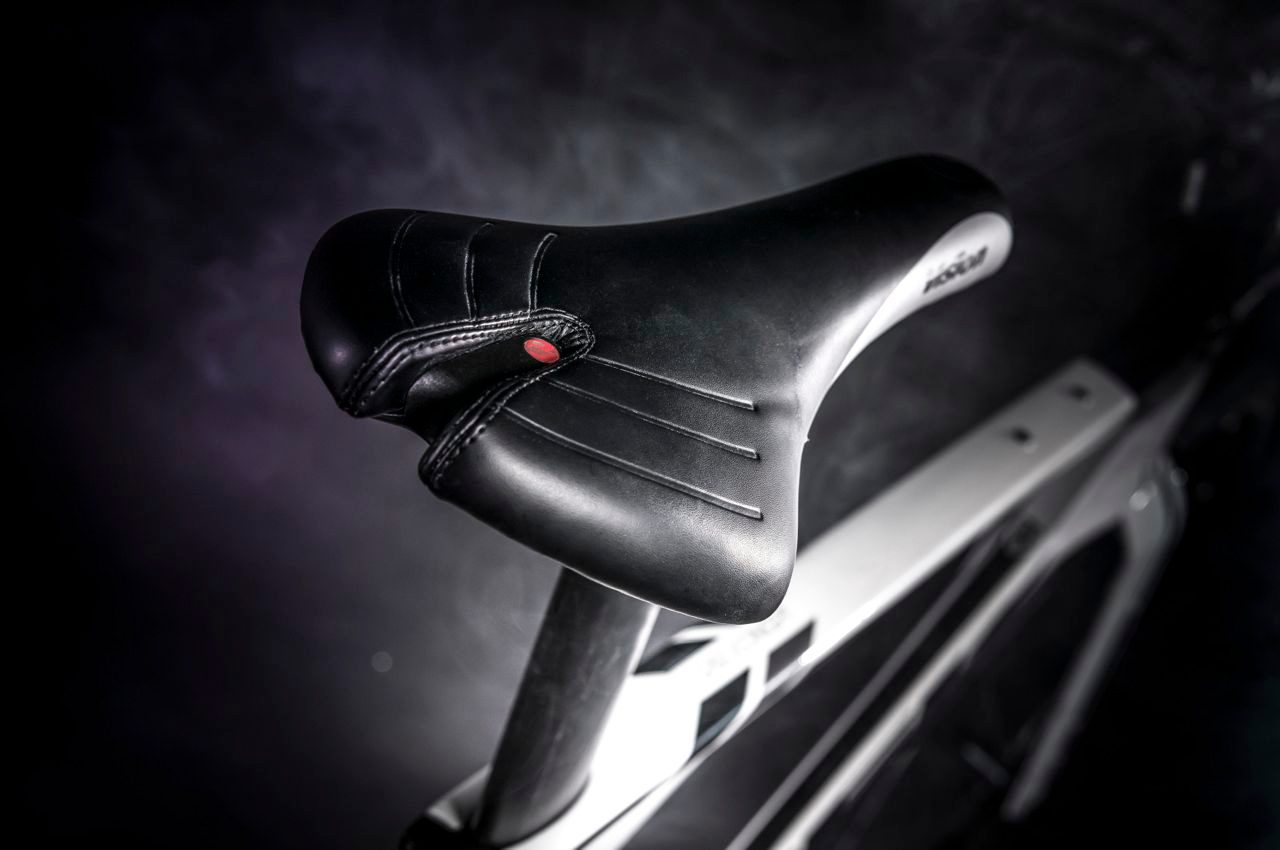 To that end, more stub-nosed, grooved and pronged saddles are appearing on tri-specific bikes to eliminate or at least minimise the discomfort that riding in a low-profile tuck can cause.

The various designs are intended to relieve pressure on the rider’s perineum by supporting their weight on their ischial tuberosities (sit bones) instead.

Getting through a long-distance bike leg means carrying fuel, tools and spares, so storage is a concern on a tri-specific bike. Stuffed jersey pockets and a pair of bottle cage mounts will do the job, but there are better ways to solve the problem.

Drinking systems mounted between the aerobars or, better still, integrated into the frame (such as Specialized’s Fuelselage), provide convenient, aerodynamic options, while carefully shaped containers such as the top-tube box seen on the Scott Plasma or the Draft Box mounted behind the seat tube on Trek’s Speed Concept provide places for tubes, tools and food.

Despite the presence of levers, it can often appear as though triathlon bikes don’t have any brake callipers. Aerodynamics is the reason for their apparent invisibility as bike designers look for ways to keep them out of the airflow. 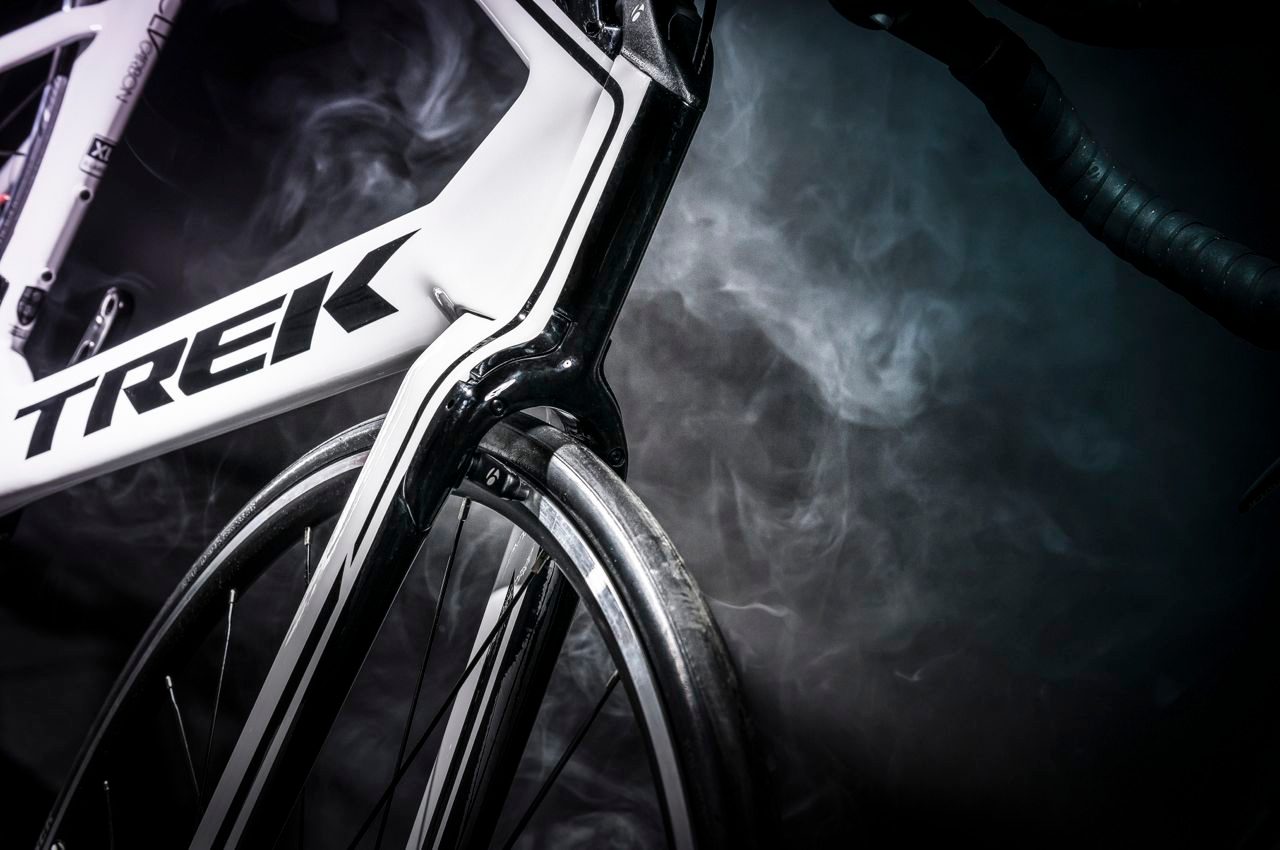 Hiding the front brake behind the fork or integrating it into the fork’s structure is a popular solution, as is mounting the rear brake behind the bottom bracket, underneath the chainstays. 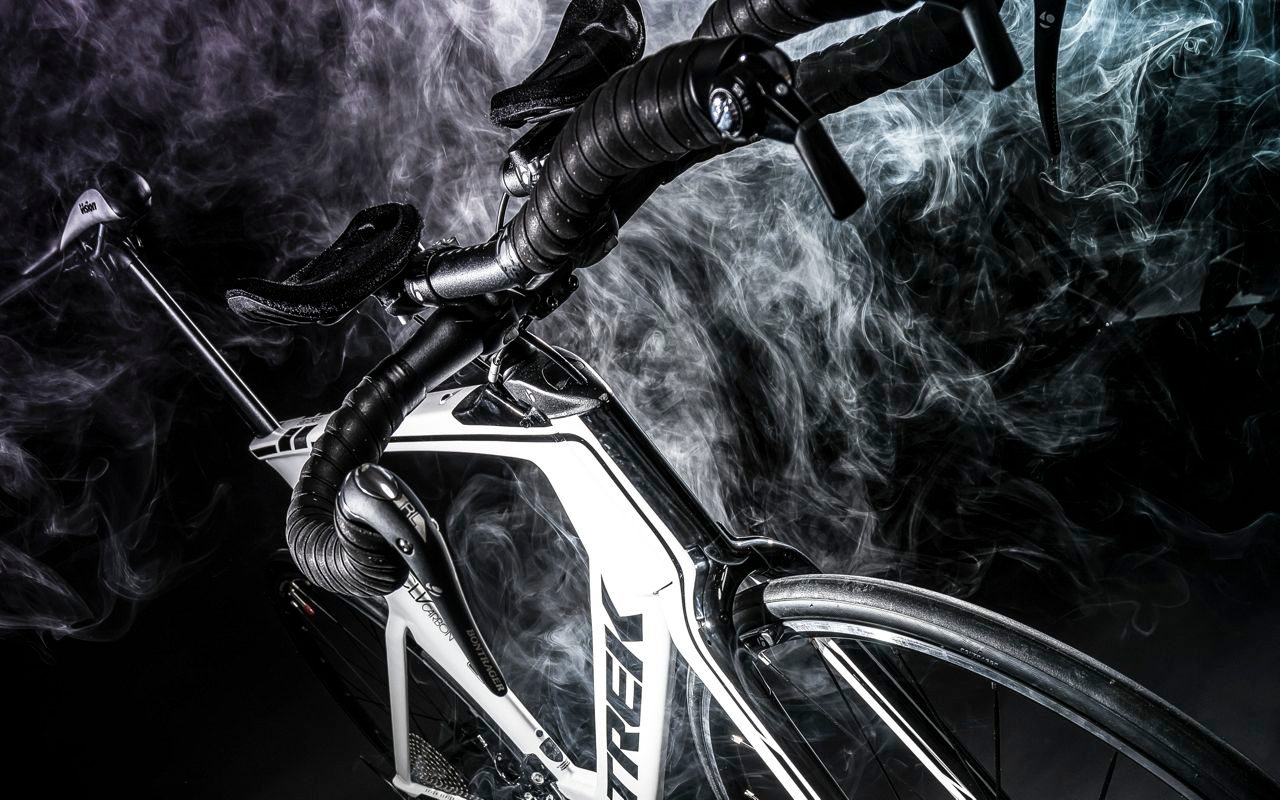 So can tri bikes perform on every type of course? Or are there times to bring out the trusty road bike?

Given the specific job a triathlon bike has to do, how much of a difference can one make compared to a normal road bike with or without aerobars?

“For the same rider [whose body and position is the cause of the largest proportion of the total drag] on all three bikes, a road bike without aerobars can generate as much as 20–25% more drag,” says Trek’s Carl Matson. “[That] sounds like a huge number and it is. Even if you can stay down in the drops for the entire ride, you’re presenting more frontal area and non-aero shapes to the wind due to the wide arm position.”

Clip-on aerobars will help to reduce that number, but even with them it’s still difficult to reproduce a triathlon bike’s riding position without a forward-angled seatpost and non-standard stem. 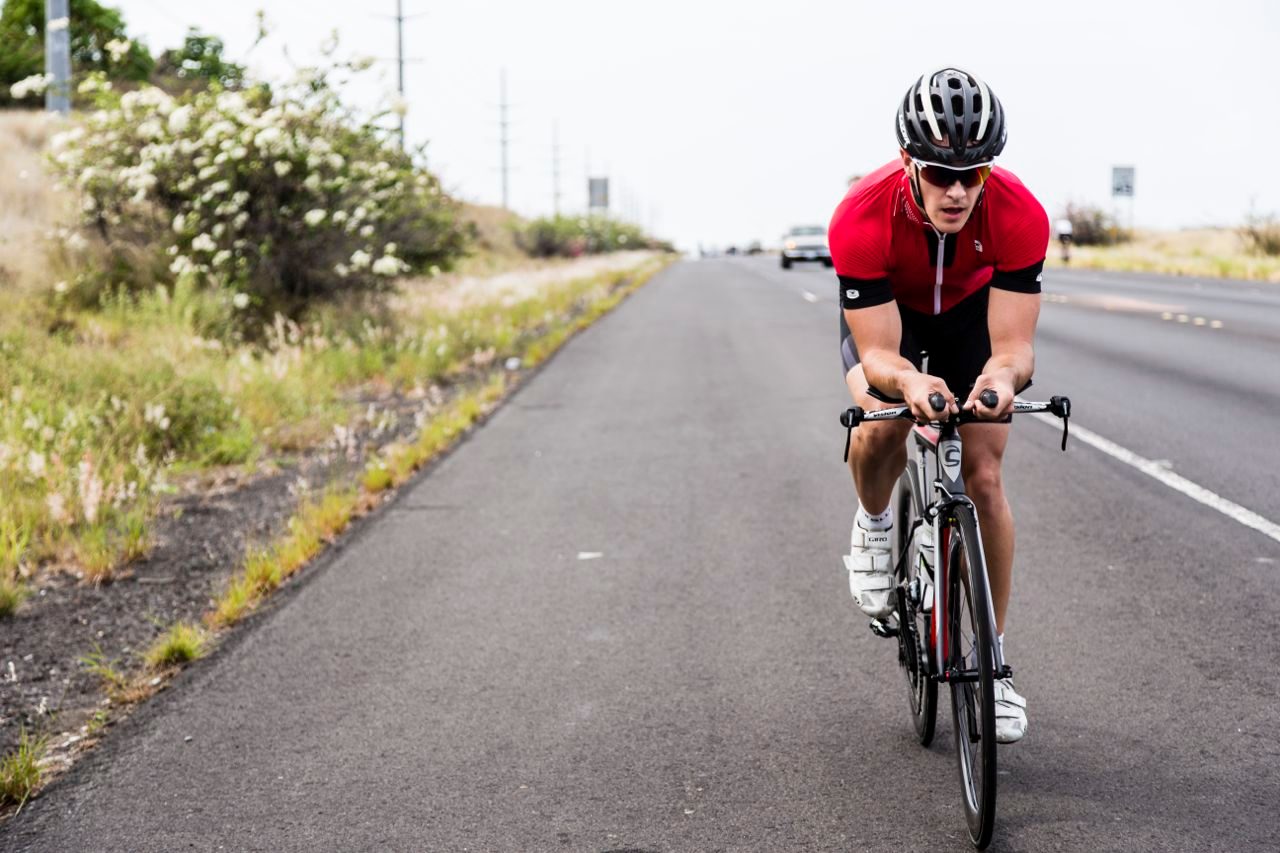 “[Assuming] a rider can achieve the same position on a road bike with clip-on aerobars as they can on a tri bike,” continues Matson, “any remaining aerodynamic differences would be down to the bikes themselves. In this context, a tri bike’s advantage would be reduced but if the rider’s on a Trek Speed Concept, they’ll be producing 3–5% less drag.”

Whether those figures come from real-world testing or the controlled conditions of a wind tunnel, they make a convincing argument for using a triathlon bike, especially in long-distance races where efficiency is a greater priority than sheer power. But the specific nature of their design also makes them ill-suited in certain situations, such as races with hilly or technical bike courses.

Triathlon bikes fail to shine on such courses because the extra material required to make them aerodynamic adds weight, and their ‘pitched forwards’ riding position leads to awkward handling.

Furthermore, all the extra components that make up a tri bike’s cockpit reduce the clearance for your knees and wrists when you want to get out of the saddle to climb or accelerate. 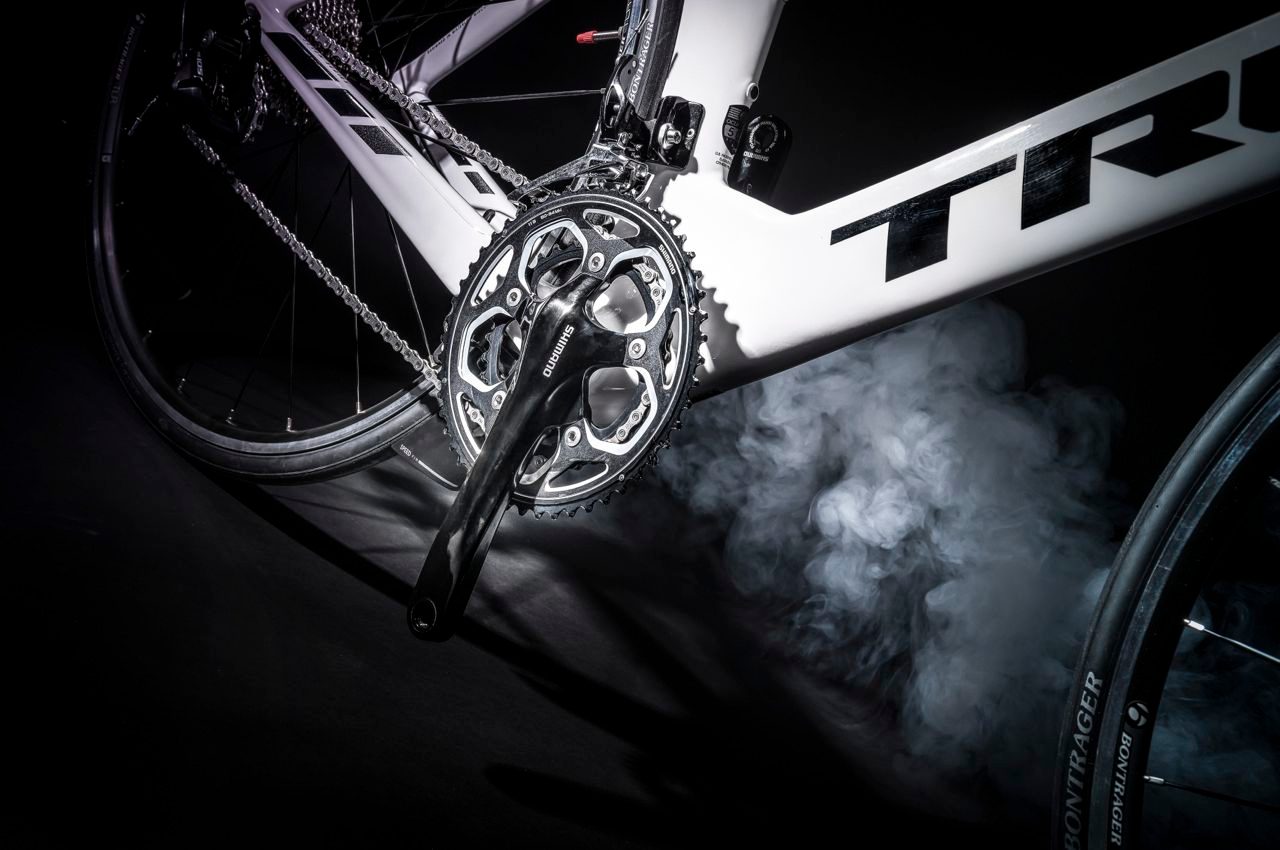 But what about crosswinds? All those broad tubes look ripe for getting shoved around and making your life difficult in side winds. Well, yes, up to a point. Because, depending on the strength and direction of the wind and the shape and dimensions of the tubes, crosswinds can actually help.

“Just like a disc wheel can be really good in crosswinds, the increase in surface area and very smooth, very controlled shapes end up helping the bike get pushed forward in a crosswind,” says Specialized’s aerodynamics R&D manager Mark Cote.

“Yes, [more] side surface area can push you over, but if you have the surface area in the right place it actually makes the bike ride more stably… [the bike] ends up effectively sailing by taking energy out of a crosswind to push you forward.”

It’s a safe bet that tri bike designers will continue to focus on aerodynamics as they search for ways to improve their machines in the future. But that’s not to say there aren’t other elements under consideration, as Carl Matson explains.

“At the high levels of the sport, I see the industry trending towards more integration of components, features and accessories. More system-level solutions as opposed to the ‘à la carte’ aero market we have right now.” 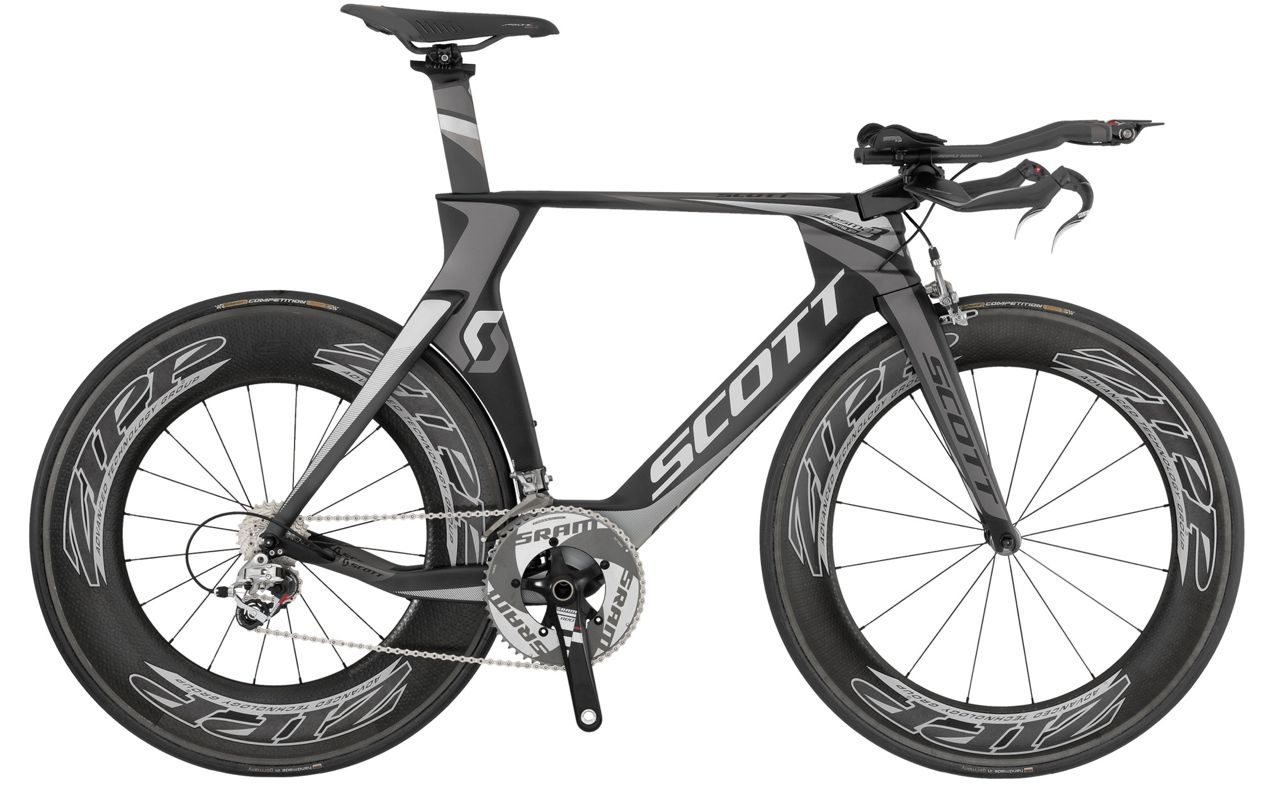 In other words, we’ll see more bikes with the sort of dedicated bars, bottles, boxes and brakes that can be seen on a host of tri bikes, including the Trek Speed Concept, Scott Plasma, Felt IA and Cervélo P5.

Brakes, in particular, are a hot topic, given the arrival of disc brakes on consumer road bikes and their imminent trial in pro road racing. So are they an option for triathlon in the future?

“They’re a worthwhile option in triathlon right now if you’re doing Xterra,” says Matson of Trek. “Otherwise, I see disc brakes on triathlon bikes as something that only happens on a large scale if and when the road bike industry achieves a major changeover to the technology.

“The dedicated triathlon bike appeals to athletes who, for the most part, are looking for every speed advantage or power saving they can find. [Having] something extra hanging out in the wind costing them watts when it’s not being used has a hard time justifying itself.

“On that basis alone it wouldn’t surprise me to see highly-integrated rim brakes survive a disc brake revolution as a performance advantage. And that’s without considering the improvements in rim brake performance hydraulics might bring.”

Although we might not be saying goodbye to the rim brake just yet, with ever more integrated ‘hydration systems’ appearing, the same might not be true for the traditional drinks bottle.

For lots more kit advice head to our Gear section