After 157 days at sea and 1,792 miles of swimming, 33-year old Ross Edgley today became the first person to swim around the UK coast — breaking several world records into the bargain — and 220 were there to share the moment with him.

Finishing on 4th November, the swim has had some highs and some lows that really captured the world’s imagination – most of us will by now be familiar with the horrors of salt tongue, jellyfish attacks and zombie feet – as well as amazing records broken, the sealife that has swum with him, the famous ‘banana count’ and (perhaps most memorably) Edgley’s irrepressible enthusiasm for an endurance event many believed was impossible.

True to form, the finish was nothing short of spectacular and today 220 Triathlon were lucky enough to join 300 open-water swimmers who took to the water to meet Ross 750m from the shore in Margate and bring him home as part of a flotilla of swimmers.

The swimmers (most in wetsuits, but some in skins in the 11 degree water!) met Ross alongside his boat and crew and with an appearance from the Red Bull Matadors display team, an emotional group made their way to the finish on the beach in Margate, where Ross swam the final few metres ahead of everyone else to individually finish his world-record swim alone and make his way on to dry land for the first time in 157 days. There, hundreds of supporters met him including Ironman triathlete Lucy Charles and SAS: Who Dares Wins’ Ant Middleton, both of who advised him during his training. 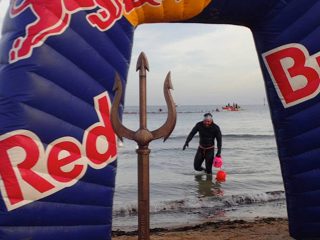 Once out of the water we managed to grab a hug and 10 minutes with Ross to find out how he’s feeling at the end of his epic journey:

It was just nuts, wasn’t it? This is why the open-water swimming and triathlon community are so special – and maybe it’s something about Britain as well – but if you said to anyone else in any other sport “it’s Sunday morning, there’s this guy swimming in to shore, you’ve never met him before, but do you want to get up and swim with him? It’s going to be really cold…?” they’d probably say no! But in this sport everyone was like: “Sure!”

We had guys in skins out there, we had some amazing Channel swimmers with us and we had the Royal Marines guiding everyone in… It’s hard to explain how I felt in that moment but you were there, you saw it! I had to remove my goggles at one moment, I got so choked up.

That was the best way for the swim to finish as well. Having everyone there, that massive group hug in Margate when we were all clambering all over each other… I couldn’t have asked for anything else. It was the best way to end and it was just amazing. 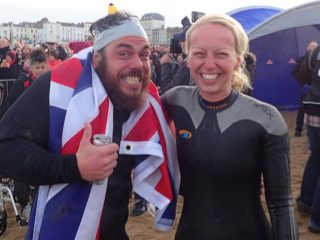 220 Editor Helen Webster joined Ross as part a group of 300 swimmers for the final swim into Margate. Image: 220/Gavin Parish

220: Has that sense of community been important in this challenge?

It was never my moment and it was never an individual sport. From the outset this was a team effort. For example with the salt tongue, my tongue was literally falling apart and the community of open-water swimmers and triathletes helped with advice and help! It was really nice getting that support – they’d say “oh wetsuit chafing, here’s what I’d do”, or “your tongue is falling apart? Here’s a homemade remedy”.

220: How are you feeling now you’ve completed the swim and are back on dry land?

I like to talk and it’s nice to see people! I’ve had the company of minke whales and dolphins and they don’t talk much! I met one lady today who was going to swim the channel but she’s been diagnosed with cancer, so is going to get treatment and try again next year – hearing stories like that is just amazing.

When you do something like this it brings people together, just the crazy nature of it. I don’t know why! It just brings the very best people together. There’s one person that came all the way from America! We asked him if he had any family in Margate, but he was like: “nope. I’m just here for the swim!” He came from America and is flying home tonight, that’s just amazing. I had to be pulled away from him, I would still be there with him and with everyone else taking selfies!

220: What else helped you get through the swim?

The team too, for sure. Me and Matt got quite choked up last night. The sense of humour that you develop to try and get through something like this is quite something. Last night we watched the sun set and we were talking about how he’d bought 5kg of Vaseline with him for the swim… So much lube… and I’d said we were never going to need it all, but we got through 4kg! That’s the statistic from the swim that I’m most proud of!

Towards the end he’s putting Vaseline on my neck and helping me into my wetsuit and I just whispered “I’ve never really been chafing, I just like these moments together…” and he’s just rolling around in stitches laughing. There was this constant weird sense of humour, that you will only get when you do things like this. Open-water swimmers will understand, it just bonds you in strange ways! 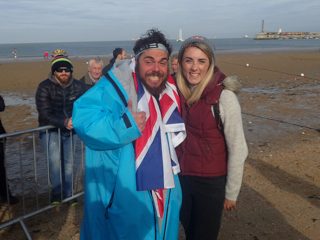 220: Now you’re on dry land, what are you most looking forward to?

I just want to be warm! The Great British Swim strips you back to your most basic human needs. I haven’t been warm in 157 days so now I just want to be toasty. I wouldn’t mind sweating, I mean, I haven’t sweated in 157 days! People ask if there’s anything else and I’m like “no, just warmth!” I’ve got socks on now and that feels nice! It sounds cheesy, but I just want family and friends – and to be warm. Barbeques too, maybe. I missed out on a summer of barbeques…

To read the full interview with Ross Edgley where he opens up more about finishing the Great British Swim, how his body has been affected and what his next challenge will be, check out issue 359 of 220 Triathlon, on sale 29th November 2018.