The five-time ITU world champion Javier Gomez (ESP) has been forced to withdraw from competing in this year’s Olympic Games in Rio. In what must have been one of the hardest messages he’s ever had to, or will have to, write, the 33-year-old informed the world that due to a crash while bike training he had no choice but to pull out of the XXXI Olympiad:

“I’m really sorry to let you all know that yesterday, when I was just about to finish my bike training, I had one of those silly crashes, no faster than 15km/h. Immediately I felt pain in my elbow so we went to the hospital. Scans have confirmed a displaced fracture in the radial head of my left arm. Going into surgery today to fix it.

“Unfortunately this has forced me to pull out of competing in Rio. I need to be realistic, there is no time to prepare and to be fit on the start line of the games. The most sensible thing is to open my spot and allow someone else the chance to race.

“As you can imagine, this is a really tough time, it’s a goal I have been working for over many years. I will keep fighting, I still have many goals in this sport, I’m not done yet. I feel sad and disappointed to give you this news, thanks for the ongoing support.” 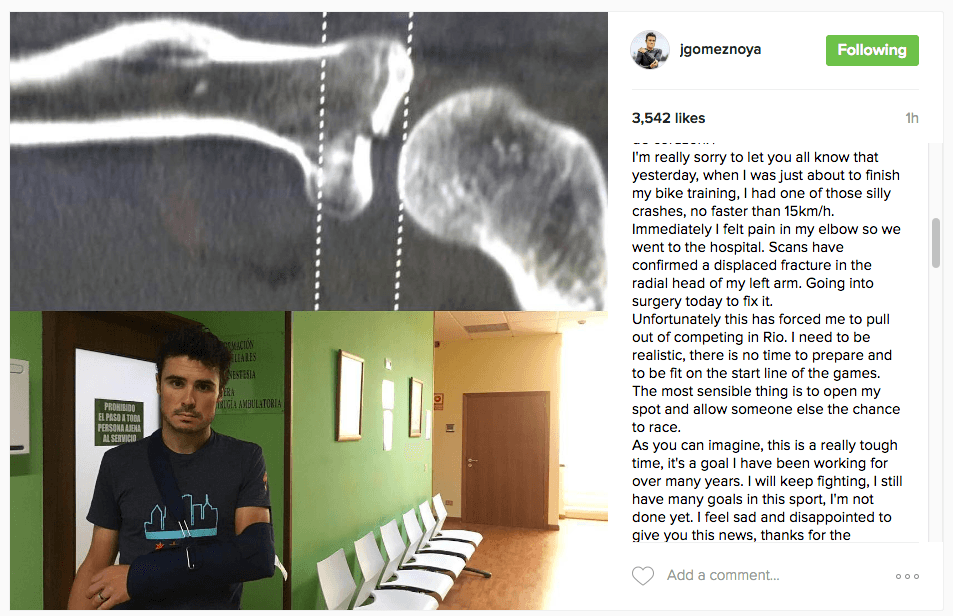 A popular presence in multisport racing, the news comes as a blow to Gomez’s many fans both on and off the course. At time of writing, the Brownlees had yet to comment, but British Triathlon Performance Director Brendan Purcell had this to say to Tri247:

“That really is terrible news to hear. Javier is such a talented athlete, and you want the best athletes to be racing on the biggest stage. While Javier is perhaps the biggest threat and rival to Alistair and Jonathan Brownlee’s prospects, his presence would also be an asset. As such a strong all-round athlete, having Javier there increases the prospects of a small, breakaway group at the front of the race, making it much harder for some of the slightly weaker swimmers to get back into the race later. Sincere best wishes to Javier on his recovery.”

Rio would have been Gomez’s third Games, having finished fourth in Beijing and second in London, with many predicting another podium finish for the former 70.3 and Xterra world champ.

We wish Javier Gomez all the best at this difficult time and wish him a speedy recovery.