With the worst of the British weather lurking, riding outside may soon seem an unattractive proposition. And yet reasons to hop on a trainer extend beyond avoiding adverse weather: more structured workouts without needing to stop at lights, no traffic to contend with, and less pre- and post-riding faff, to name but a few. In fact, Lionel Sanders does most of his hard bike training indoors, and who are we to argue with one of Ironman’s strongest riders?

With the latest wave of sturdy smart trainers that can simulate huge amounts of resistance, indoor training has been reclaimed as a brutal pursuit that can often be mentally and physically tougher than riding outside. You can find thousands of structured sessions across the various smart training apps, some of the more popular options being TrainerRoad, The Sufferfest and Zwift; the latter of which plays out like a computer game on screen.

The six trainers on test represent a spectrum of designs, mechanisms and price points, from portable options with manual resistance, to wheel-on units, to the very latest direct-drive trainers with a highly realistic experience that’s almost like riding on the road. 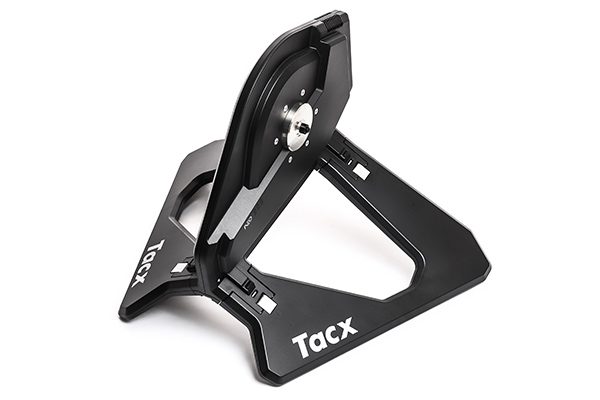 The Neo Smart was proclaimed the quietest smart trainer upon launch in 2015 and, although Wahoo’s Kickr now takes that crown, we still couldn’t get our meter reading above 65dB. The huge wing-like build makes it incredibly stable, proving solid during several sessions. While you need the adapter to get the most out of the Neo Smart, it can operate via a dynamo in a reduced capacity, which is handy for using on the go but at a beastly 22kg, it’s pretty difficult to cart around. While it appears stingy not to have a cassette included when the price is so high, the Neo is fitted with Edco’s handy Multisys universal freehub, although it’s a shame you have to buy separate adapters for thru-axles, which the other direct drive trainers on test include. So, while we appreciate the road-like feel, cycling tech moves fast and we think it’s now due an upgrade. zyrofisher.co.uk

Verdict: super stable and built to last, but needs some updates to match its rivals 73% 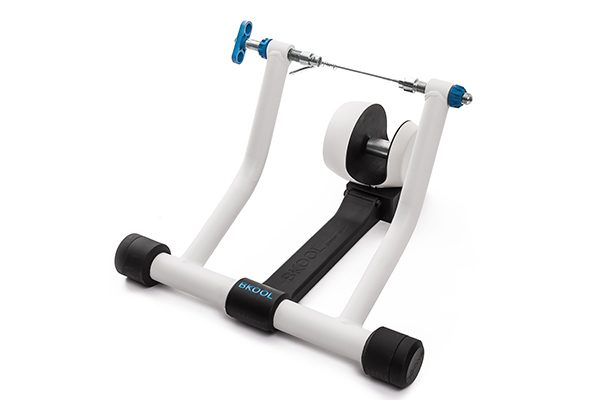 Bkool’s Smart Go has proper connected features, giving you power readings and Bluetooth/ANT+ wireless connectivity at an impressive price point. It’s a wheel-on trainer, and the roller is non-intrusive so won’t cause tyre damage. At 78dB, it’s impressively quiet during all-out efforts, and the max power output is a claimed 800 watts; although we did feel it was markedly less stable than more expensive options when putting out 400 watts plus. While the Smart Go ticks a lot of boxes, unfortunately we found some big discrepancies with the power readings in a test against some power meter pedals, with the numbers surging when you’re out of the saddle and reading far too low when you’re leaned back. If numbers aren’t the be all and end all though, and you’re not putting out wattage akin to a pro track cyclist, the Smart Go is a functional and affordable smart trainer. i-ride.co.uk

Verdict: not without its flaws, but you get a lot for your money 79% 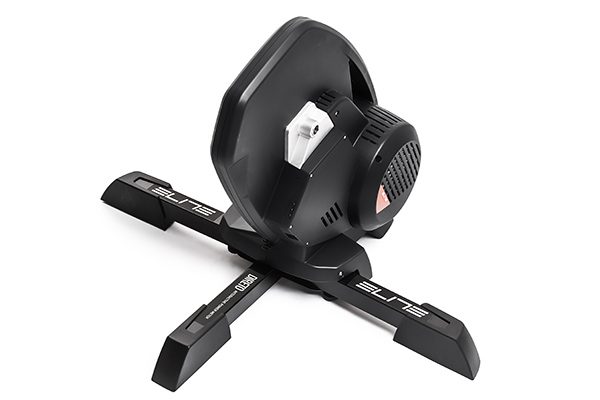 Though it’s still a hefty investment, Elite’s Direto has most of the features you’d find on trainers costing £1,000 plus. It’s ANT+/Bluetooth compatible, can be used on ERG mode and even has a built-in cadence sensor – a bonus compared to Wahoo’s more expensive Kickr. There’s a Shimano/SRAM-compatible freehub to which you fit your own cassette, plus quick-release and thru-axle adapters. Assembly is cumbersome with the legs needing to be slotted into place, but when up and running the Direto is totally solid and impressively quiet at 70dB. The power meter is claimed to be accurate within +/-2.5%, and we found the numbers almost spot on. The ride feel wasn’t as refined as the best smart trainers, but it’s still impressively realistic when used with a virtual training app nonetheless.

Verdict: up there with the very best smart trainers, and for a friendlier price 87% 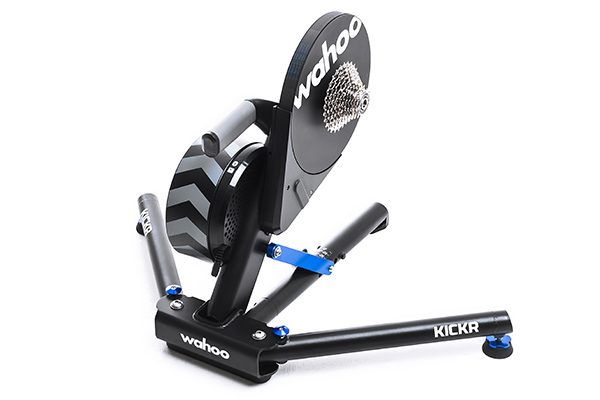 The Kickr is Jan Frodeno’s trainer of choice for good reason, with the 2018 edition being tweaked with a larger flywheel for greater stability, a max power output of 2,200W and quieter operation. Installation takes seconds, and when we got going we found that, apart from the whirring of your drivetrain, it’s virtually silent in operation. The Kickr is very stable and resistance is super responsive when used with training apps such as Zwift, changing quickly when prompted. We’d still like to see the Kickr easier to transport in future, as its 21kg bulk is difficult to move around even with the large handle. You also have to use the supplied adapter to get any resistance and Campagnolo is snubbed with the pre-installed Shimano/SRAM compatible 11-speed cassette. So, although there’s still room for improvement, for us, the Kickr is currently setting the smart training standard.

Verdict: a cutting-edge smart trainer that’s now better than ever 86% 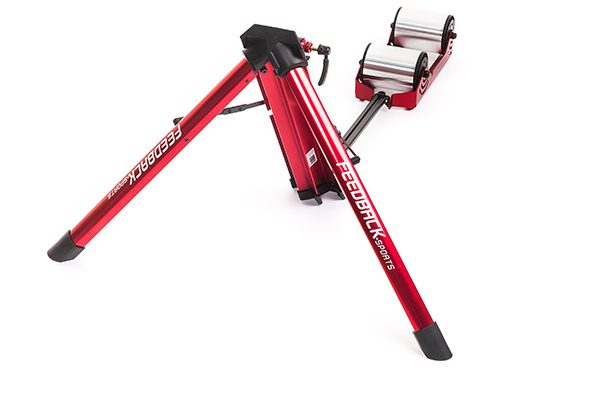 The Omnium from Feedback Sports is the only true ‘manual’ trainer on test, with just a sliding mechanism underneath to increase or decrease the internal magnetic resistance. It has rollers at the rear and at the front you simply remove your wheel and attach your bike, which has adapters for quick releases and thru-axles. It’s essentially a similar ride feel to rollers without the risk of falling off, and the fork clamp is super sturdy. While it doesn’t have all the bells and whistles of a smart trainer, the Omnium’s added value is to be found in its portability. Weighing just 6.2kg and easily foldable into its own tote bag, it’s pretty much two products in one: a capable, simple trainer to use at home and one you can take travelling for race warm-ups. If you already have a power meter and don’t spend a great deal of time training indoors, the Omnium could be for you. Verdict:

Verdict: a great little portable trainer that you can set up in seconds 85% 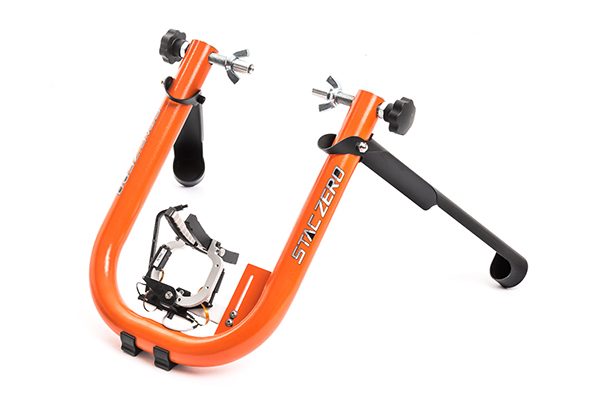 This intriguing trainer arrived just as it reached final design phase, with the companion app launched in August. The resistance is created by magnets that automatically adjust on your rim, meaning you don’t even need a tyre mounted at the rear; the rims have to be alloy as the magnets won’t react with carbon, so a cheap training wheel suffices. The big sell is that it’s virtually silent, with a slight noise coming from the drivetrain. It’s a full-on smart trainer with a power meter and Erg Mode, and the rechargeable battery lasts 10 hours, so it’s totally wireless. The supplied ‘wheel weights’ need to be slotted on your rear wheel and are essential to creating a realistic experience, yet this is cumbersome and we’d rather a pre-installed wheel with weights. But if you have neighbourly concerns, it’s worth considering. staczero.com

Verdict: unique concept and quiet, but convoluted compared to the competition 75%