10 tips for living through lockdown with a bored triathlete

Is the coronavirus lockdown driving the triathlete in your life mad? Are you quietly thinking about all the ways to cause them harm? Then what you need are Martyn Brunt's top-10 coping strategies…

Are you living through lockdown with a triathlete? Are you currently trying to cope with having less sunshine and fresh air than Harvey Weinstein, while stuck indoors with an exercise obsessive? Is the triathlete in your life constantly standing at the window, wistfully looking outside and hoping that all this panic disappears as quickly as their rapidly diminishing fitness?

Well fear not, help is at hand. Whether it’s Italians running marathons on their balconies or Brits taking up bare knuckle boxing for bog rolls, people all over the world are coming up with new and creative ways to get through being forced to spend time at home. So here, off the top of my head, are 10 things you could do in the comfort of your own four walls, to make life with a trapped triathlete a bit more bearable.

1. People in the UK are still allowed one trip outside a day for exercise, so why not set up a transition outside your front door. A simple metal bar across your doorway for them to hang their bike on, and about 5 inches of ground space on your doorstep for them to lay out all their kit on, is all they need to ensure that once they come back from their four hour ride they can go straight off for a two hour run without any of your neighbours being able to grass them up for going out twice.

2. Minimise the effects of the triathlete in your house endlessly standing sideways in front of your mirrors and frowning at their waistline, by installing curved glass mirrors which make them look slimmer than they are.

3. Suggest that one of the wheels on their bike doesn’t appear to be running quite true. What will follow is hours and hours and hours and hours of peace and quiet while they tackle the perceived kink with a spoke key and the concentration of a safe cracker, steadily making the wheel progressively worse until it resembles a wok.

4. Ask them how their most recent race went. That should kill a few hours while they give you a blow-by-blow account of every aspect of the event starting with their training for it and ending with a comparison with other races from this and previous seasons, and an explanation of how their finishing position of 165th is actually much better than it sounds because they were in the top 20 (19th) in their age-group of people from their club who are the same sex as them. Have some earphones handy.

5. Stave off their chances of getting cabin fever by sellotaping pictures of Tour de France cyclists to your bathroom mirror, and then pretend they’re on a conference call to seek advice on tactics for the next day’s stage.

6. Remind them that any Government ban on gatherings of more than two people doesn’t affect them anyway because they spend most of their time on their own either swimming, cycling, running, or smelling so bad that no one will go near them.

7. Rig up a means of converting the power generated by their turbo trainer into electricity. Considering the indoor lifestyle means they’ll be hammering the pedals on their turbos like Mark Cavendish down the Champs Elysees, you’ll probably end up being able to sell energy to the National Grid.

8. Make housework or DIY competitive. Casually suggest that your next door neighbour managed to creosote their shed in under 90 minutes, or that you saw the people over the road carrying THREE paving slabs each while relaying their patio, as a surefire way to get these jobs done in record time. Alternatively, set your living room carpet as a Strava segment and record a ridiculously fast time for hoovering it, and then brag about your league-leading position.

9. Get them to work on their post lockdown hairstyle. Many triathletes see large amounts of hair as an impediment to streamlined swimming or aerodynamic cycling, so point out that now is the ideal time to fulfil that long held dream of looking like Don King, Tina Turner or Jon Bon Jovi, or maybe even go for two haircuts at once like Chris Waddle.

10. Make use of their unique triathlon skills. For example, in supermarket queues, get them to introduce themselves as a triathlete and start talking about their PBs. Soon everyone will back away and let you go first.

I hope all this helps and remember, for the experienced among you, it’s just like tapering – you know, that hellish period where the triathlete in your life turns into a pensive, moody germ-obsessed exercise avoider, endlessly tinkering with their bike. It’s just like that, only without any foreseeable end. Good luck!

Coronavirus: how to stay motivated through the pandemic 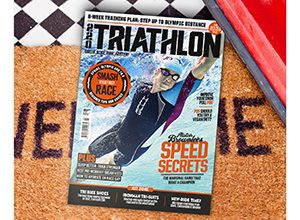 Get 220 Triathlon delivered to your door

We are here for you. If you’re used to buying our magazine from the shops, you can order by 30th March and receive our next 3 issues delivered to your home. This offer is risk-free, doesn’t require starting a Direct Debit and offers you a 15% saving with no delivery charge. If you are happy to set up a *Direct Debit with us we can offer you greater savings and your first 6 issues for just £9.99. Pick what works for you and you’ll soon be receiving  direct to your door. Stay safe everyone

A 220 Triathlon Magazine subscription is the first step towards reaching your goal, whether it’s your first triathlon, you’re chasing that elusive PB or you’re taking on the elite. Whatever your level, gaining that extra ounce of performance over water, road and track is what this magazine is all about. With your 220 Triathlon subscription, you have the experts on hand to encourage and guide you every step of the way.