Five years ago, Vanessa Raw had the tri world at her feet. Then injuries mounted and confidence evaporated. Andy Blow hears how a focus on run and gym work is returning her to top form

Vanessa Raw exploded onto the triathlon scene in 2006, giving Helen Jenkins a scare at Windsor, taking fourth at the Under 23 Worlds and 10th at the Beijing Olympics test event. It was an incredible debut season for the then Loughborough-based fine art student. As a result, all the talk was of the 2008 Olympics and probable world domination.

But, despite her obvious talent, work ethic and racing abilities, Vanessa’s body had other ideas. A series of stress fractures, knee issues and niggles stopped her competitive progress during the subsequent seasons. By 2011, she was approaching her wits’ end, a persistent foot problem causing her to all but throw in the towel. It was at this lowest of low points that Vanessa’s manager, Luke Lloyd Davies, introduced her to fitness trainer Jon Roberts and a light appeared at the end of the tunnel.

Buoyed by this and encouraged by Roberts, Vanessa started training again in mid-2011 and started to see results almost straight away.  At the end of the 2011 season, she grabbed 10th at the Mexican ITU World Cup race and won the Eilat Triathlon (a European Cup race).

She’s currently putting in about 10hrs of swimming (5 x 2hr sessions with Kingston Royal swim club), 9-10hrs of cycling over four to five sessions and four run sets totalling 3-4hrs, plus gym work in a seven-day cycle. Training tends to be done early in the day (she starts swimming at 5am) and finishes around 3pm. “This allows me time to paint in the evenings, which is relaxing and energising,” she says.

– ‘Super set’ runs on undulating ground where they lift the pace for about 1km at the end of a 3km set to ensure Raw can accelerate at the end of races.

These are complemented by power, balance and strength sets in the gym using exercises like deadlifts, squats and split lunges to both aid balance and to control eccentric movements of the lower limbs while limiting rotation in the back. 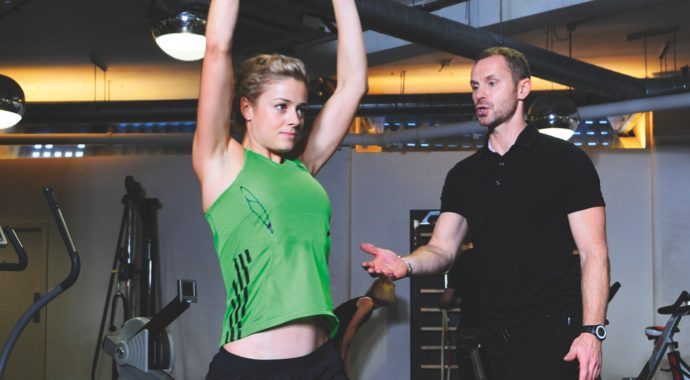 The main exercises Vanessa follows to build strength and muscular endurance are done as ‘super sets’ to complement each other. These emphasise slow, controlled movements in the eccentric phase and faster, more powerful ones in the concentric to increase both stability and power. Often they are unilateral exercises (using one side of the body at a time) to create balance and even out discrepancies from side to side.

Vanessa lowers down in reverse to a slow count of three, before pushing back up in a count of one. She does a low number of reps (three to six) per set for strength and power. This exercise is ‘super-setted’ with alternate sliding squat thrusts. These use opposing muscle groups and are designed to promote muscular endurance by completing 50 repetitions. This whole set is undertaken five times in total.

Like the lunges, this movement is performed slowly when lowering the weight and quickly when lifting it up. Again, three to six reps are performed and it’s super-setted with ‘face pulls’ that work the upper back and rotator cuff. Vanessa does a lot of upper-back exercises to complement the fact that swimming tends to build the chest more and can lead to poor upper back posture, which then affects her running. Face pulls are done in sets of 12-15 reps and, as before, five sets in total are performed.

This movement is performed relatively slowly and promotes balance and control. As it’s more focused on muscular endurance, eight to 12 reps are performed and it’s super-setted with a standing overhead dumbbell press. This works the shoulders and relies on good stability in the abdominals, hips and lower body. Approximately eight repetitions per set are performed; Vanessa completes three sets in total. She then finishes her gym routine by stretching all of the major muscle groups.